Going into The Fiery Furnaces’ Chicago tour stop at The Empty Bottle, I sort of knew what to expect. I mean, I’d heard Remember, their 2008 shape-shifting, hard-charging double-disc live document. And, really, not much changed that impression. The long, nonstop set sounded as if it had been rehearsed 80,000 times (for better or worse).

But, before getting to the Friedbergers, there were opening sets from The Field Auxiliary and Robbie Hamilton & the Soft Ones. Chicago’s Field Auxiliary sounded equally comfortable with knob-twiddling ambient intros as they did with big, smart indie rock, Dan Smart’s vocals reminiscent of  Okkervil River’s Will Sheff, the dual keyboards playing jaunty melodies as the rest of the band rocked out. Later, newly minted solo act Robbie Hamilton (who had previously helped back David Vandervelde, among others) and his backing band brought back the 70s fun. Fans of vintage Fleetwood Mac and the soundtrack to Freaks and Geeks surely found something to love in the Soft Ones’ set, their hooky, fun brand of retro rock entertaining, if not for a few ultra-repetitive guitar solos.

But, the surprisingly sloppy, drunk people were there to see The Furnaces, and they reacted appropriately as siblings Eleanor and Matt Friedberger climbed onstage. They immediately turned on the way-back machine for their first song, 2003’s “Tropical Ice-Land”. The swinging, bluesy garage fun tore through the room, getting everybody dancing. And, just as Remember had suggested, the song didn’t stop, instead melting into the next, Bitter Tea‘s excellent “Benton Harbor Blues”. The entire set was given a sort of “Greatest Hits Medley” treatment, everything at a similar pace, smaller, more straightforward sections of larger, more complex songs folding into each other.

Eleanor’s stage demeanor  was understated, her story-songs narrated very bluntly. Meanwhile, Matt’s arm flung out at his guitar mechanically, hitting every note precisely. Touring bassist (and member of Sebadoh) Jason Loewenstein and drummer Bob D’Amico acted as a formidable rhythm section, storming through each songlet. Notably, though, was the lack of keyboard. Matt’s intricate instrumentation on record was sorely missed, the traditional rock band lineup lacking that eccentricity that makes up a lot of the Furnaces’ appeal. Some songs benefited from the straightforward tempos and instrumentation, though. “Black Hearted Boy” clacked forward, big chopping waves of guitar crashing after Eleanor’s vocals. The sped up version of “Teach Me Sweetheart” was a revelation as well, all bones and sharp edges. 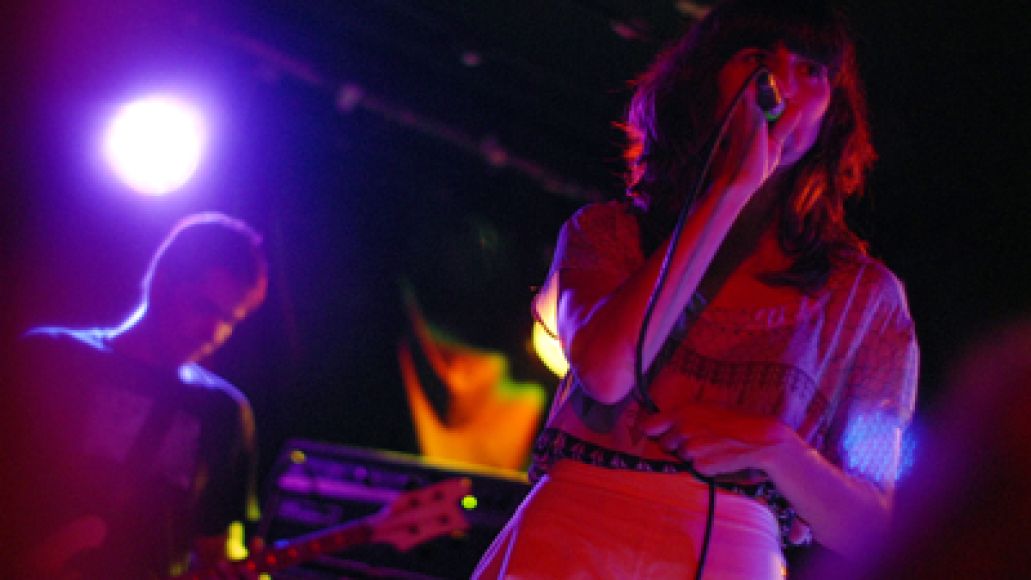 Other songs didn’t fare quite so well, though. Widow City standout “Clear Signal From Cairo” needs its herky-jerky, start and stop motions to distinguish itself. “The Philadelphia Grand Jury” also seemed a bit stiff. The downside of the medley showed from time to time, great songs cut too short, the fluidity sweeping past moments of power. Eleanor still found a few moments to show some real excitement for the music, mostly on newer tracks. I’m Going Away‘s “Charmaine Champagne” kicked past as Loewenstein’s bass fluttering and Eleanor bopped and crooned, as well as “Take Me Round Again”, with its triumphant repeated line, “I’ve got rings on my fingers.” Sublimely simple “My Dog Was Lost But Now He’s Found” even garnered emphatic harmony from Matt, the siblings’ voices matching wonderfully.

Altogether, the long (I’d guess near 25 songs, in some manner) set felt like a large, static beast, charging forward with ultimate intent. At many moments, this felt like a powerful experience, masterful musicians showing their prowess. At others, though, it felt a little too rehearsed, formulated. It was an exciting evening of music, to be sure, but nothing to upstage the original, keyboard’ed, stop-and-start recorded versions.

The Fiery Furnaces rush through Chicago (6/18)