What was it about being in a rock band during the nineties that made it so hard to stick together? Almost every one of our favorite grunge and alternative bands carries a torrid history that killed them off before the millennium had the chance to turn, leaving us only with a faint memory and a stack of CD’s. Of those, there was one highly underrated band that managed to shoot near the top, yet seemingly disappear to the dusty shelf just as quick. That band would be Chicago’s own Veruca Salt.

Named for the mischievous and spoiled brat in Roald Dahl’s Charlie and the Chocolate Factory, Veruca Salt formed in 1992. After meeting through a mutual friend, Louise Post and Nina Gordon hit it off and began writing material as a duo. Originally, their songs were closer to Indigo Girls tributes, playing the Chicago folk coffee house scene, but it wasn’t long before a full band came to fruition with Gordon’s brother Jim Shapiro on drums and friend Steve Lack on bass. This expansion switched up their style for the more aggressive alt-rock sound that brought them acclaim.

And so it was, in 1993, when the timing was right, the band launched themselves with their first hit “Seether”. It would take over the modern rock charts, landing them at number eight, and earn them a spot on MTV’s regular rotation. By the time their 1994 debut, American Thighs, which eventually would go on to be certified gold, the Chicago alt rock band were supporting the likes of Hole.

They wouldn’t be immune to criticism, however, which followed just as quickly as the record sales. Making it commercially, but losing much credibility with the critics, they were pigeonholed as just another post-Nirvana wannabe. Critics never quite knew what to do with them, sticking them with The Breeders, but never giving them the chance they deserved, as the shadow of Cobain loomed too large on the musical landscape. As one of the few female fronted bands though, they furthered the accessibility of a sound forged by bands like the afortementioned The Breeders, and by default the Pixies, but of course that never sat well with those behind the critical pen. When their 97’ follow up arrived, the much heavier Eight Arms to Hold You, the group struck gold again with the spunky “Volcano Girls”, but that’s when the internal strains began.

With so much immediate success, the relationship between Post and Gordon became volatile. On top of that, Post was on the outs with then boyfriend Dave Grohl. After infighting and battling egos reached their worst, Gordon left the band in 98’ to pursue a solo career. This left Veruca Salt with two successful records, but no founding member. Soon the rest of the band dissolved, leaving Post as the only one left to carry on. She needed a break, as well, and took a two year hiatus from music to get her feet back on the ground, but that wouldn’t be the end of Veruca Salt.

In 2000, Post picked up the pieces and took it upon herself to reform the band, and while she would be the only founding member, she was determined to keep the name and music alive. That year she re-emerged with a new line-up and their most personally revealing record yet. Resolver wouldn’t come close to the commercial success of their past two records, but for Post it was more about personal relief and expelling her inner demons left behind from Gordon’s departure and the heartbreak from her failed relationship with Grohl. It wouldn’t be until 2003 that Post and Gordon would reconcile, and though Gordon wouldn’t rejoin the band, they could at least be friends again.

Over the next few years, Post found solace in keeping the band going, hunkering down in Europe and Australia to focus on touring and writing where her band was still doing quite well. While they stayed mostly quiet in the U.S., aside from a short tour here and there and making L.A. their new home, overseas they were enjoying some success with a series of EP’s following Resolver, including the darkly humored, aptly titled, Officially Dead EP (2003) and the self released Lords of Sounds and Lesser Things (2005). 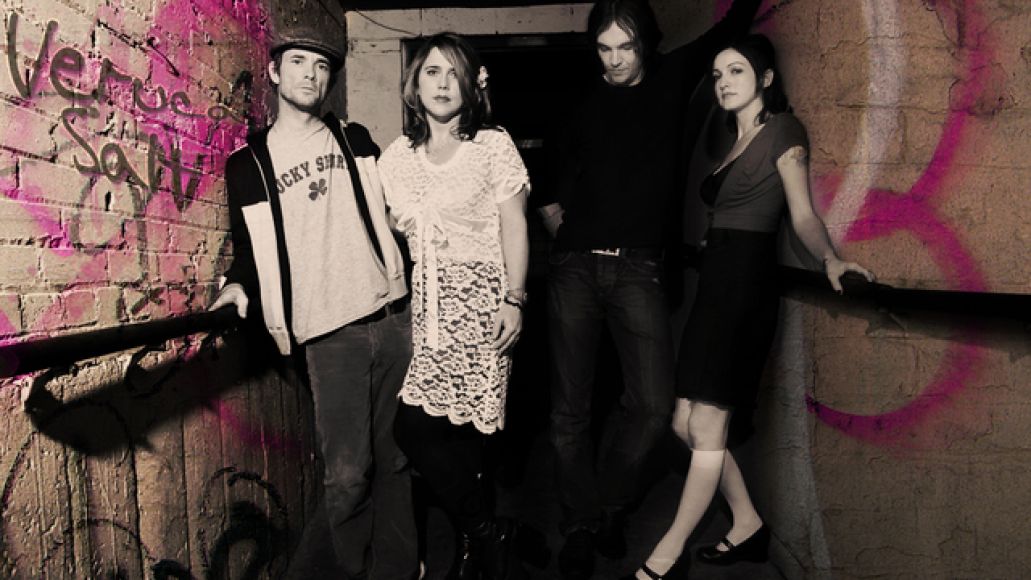 As for those backing her up, the band would be liquid. Post remained as the sole benefactor with new members coming in for tours or studio work. Veruca Salt would try one more time with 2006’s IV, and while it was musically consistent with previous post-Eight Arms work, it too would remain a cult hit amongst those loyal fans. Since then though, Post and the band have been quiet, allegedly working on a new record with a last message sent out in 2008 through their website. That message also signaled a move to a more permanent band with longtime guitarist Steven Fitzpatrick, on again off again drummer Kellii Scott, and newcomer Nicole Fiorentino – who we all know now as Billy Corgan’s new bassist.

Even as their mainstream fame faded, and original band dissolved, their music never faltered from what got them recognized in the first place. The music industry’s a brutal beast, and just because you’re riding high one year, doesn’t guarantee you the next. Like so many before and after them, Veruca Salt found this out the hard way, but it didn’t keep their leading lady from recording and carrying on over these past several years. Despite the band’s last message being two years old and counting, they’re still alive and kicking, and with any luck, the remaining loyal fans with have a little more Salt in their headphones.

Whatever Happened To: Veruca Salt