With Almost Famous’ Philip Seymour Hoffman reprising his role as a music aficionado in The Boat That Rocked, expectations are high. Lower them, now. The saving grace of this shipwreck of a film is the extensive ’60s-dominated soundtrack, which boasts 36 songs.

Debuting in the States as Pirate Radio, the United Kingdom-based film centers around an illegal radio station positioned in the North Sea. Displeased with a traditionalist British government that prefers to broadcast jazz, Radio Rock plays rock and pop all day and all night. Fittingly, The Kinks’ “All Day and All of the Night”‘s simple, sliding power-chord riff introduces and concludes the film, sending the undisputed message that the only time any of the shipmates feel all right is when music is by their side.

Speaking of the shipmates, the crew’s sense of humor is best conveyed in The Turtles’ “Elenore” and John Fred and His Playboy Band’s “Judy in Disguise (With Glasses)”. Both songs run under the three-minute mark and are accompanied by amusing tales. “Elenore” was written as a satire of one of The Turtles’ earlier pop hits, “Happy Together”. After many requests from label executives to create another chart topper, the band recorded “Elenore” as a parody of the type of happy-go-lucky pop songs they themselves had been performing. However, they deliberately used cliched and nonsensical lyrics such as “Your looks intoxicate me/Even though your folks hate me/There’s no one like you, Elenore, really”; and “Gee, I think you’re swell/And you really do me well/You’re my pride and joy, et cetera …” Ironically, the 1968 single charted at number six on the Billboard Hot 100.

In the same vein, “Judy in Disguise (With Glasses)” was inspired by Fred mistakenly believing that the lyrics to The Beatles’ “Lucy in the Sky with Diamonds” were “Lucy in disguise with diamonds.” Coincidentally, the single went on to trump “Hello, Goodbye”, another Beatles’ tune, for two weeks in January 1968 as the Billboard Hot 100’s number 1.

Beefing up the first disc of the double-disc soundtrack are the longer tracks from the equally as lengthily named Herb Alpert & The Tijuana Brass and Tommy James and The Shondells. Alpert’s “This Guy’s in Love with You” and James’ “Crimson and Clover” both use simple lyrics to convey their unrequited lust. Their all-encompassing adoration is mirrored in the feelings Radio Rock’s DJs have toward rock and pop music. These songs set the tune to the crew’s dedication in providing music fans with their hearts’ desire.

Disc two weighs in with prestige as The Who, Cream, and Jimi Hendrix grace the soundtrack. “My Generation” aptly describes Radio Rock’s aesthetic. Inspired by the Queen Mother, who allegedly had The Who’s Pete Townshend’s 1935 Packard hearse towed because she was offended by the sight of it, the song is used to address the government’s distaste with Radio Rock’s generation. The psychedelic facets of Cream’s “I’m Free” and Hendrix’s “The Wind Cries Mary” provide the soundtrack with an accurate glimpse into the late 1960s’ more experimental music, which has a heavy blues influence paired with the innovative guitar work of Hendrix and Cream’s Eric Clapton and an undeniably groovy feel.

Rounding out the heavy hitters, David Bowie provides one of the few tracks recorded after the ’60s. The 1983 single “Let’s Dance” is one of Bowie’s most well-known tracks. The radio-touting (“Let’s dance to the song/They’re playin’ on the radio”) dance anthem introduced Bowie to a new younger audience oblivious to his former career in the ’70s with its commercial appeal. Emulating this idea, Radio Rock devotedly introduces teenagers to the wonderment of rock ‘n’ roll and the British government to the quintessential “damn-the-man” attitude. 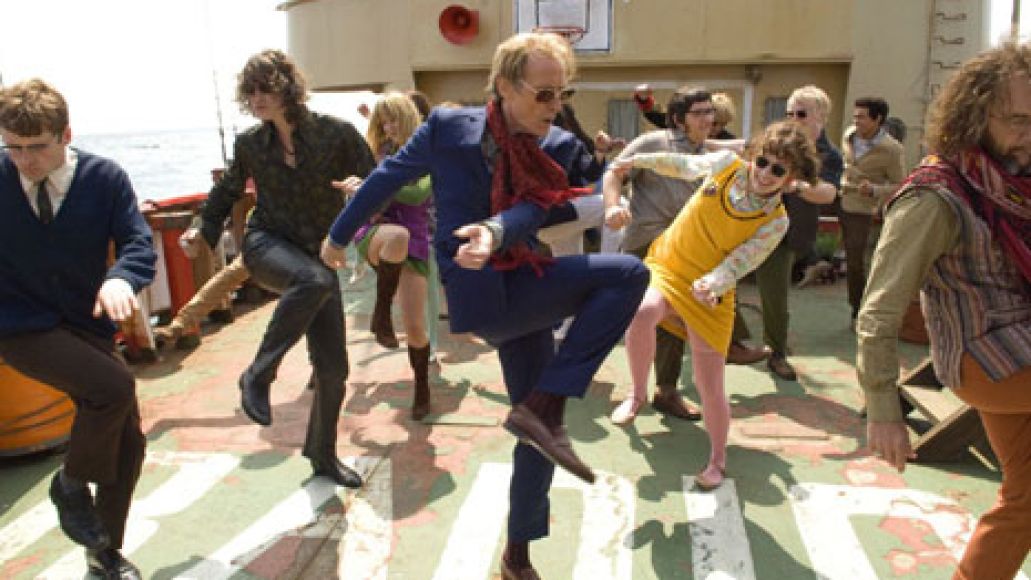 Although the film, which is loosely based on Radio Caroline, concludes with an actual shipwreck and a horrible “Free Willy” impersonation by Hoffman, it also leaves the viewer with a compilation of chart toppers and this resonating quote:

By the summer of 1967, The Golden Age of Pirate Radio was over, but their big dream never died; with 299 music stations across the UK, they play rock and pop all day and all of the night. And as for Rock and Roll, well, it’s had a pretty good 40 years.”

Cinema Sounds: The Boat That Rocked