The Nateva Music and Camping Festival entered its first year with a few strikes against it. Strike 1: Price. The event cost almost as much as Bonnaroo or Lollapalooza with only a fraction of the bands. Strike 2: Location. Oxford, Maine isn’t in the middle of nowhere; it’s in the upper right hard-to-reach corner of nowhere. Near-Strike 3 (call it a foul): Bad press. The fest first bumped heads with a reporter circulating an erroneous report saying swamp mud had rendered camping areas unusable. Then a week later, the fest sent out a draconian photo policy that basically said, you can’t print any photos we don’t like (the promoters quickly backpedaled with a Fourth of July-appropriate apology).

Against all odds though, the festival went off almost as perfectly as one could have hoped. No bands derailed the schedule with diva behavior. The ingenious layout – side-by-side main stages alternating sets – rendered delays and sound problems practically nonexistent. Families and druggies mingled cheerfully, the peace-and-love community as close to the Woodstock ideal as you’re likely to find. And perhaps most surprisingly, the porta-potties were so clean artists remarked on it from the stage. Of course, fest finances being what they are, none of this guarantees it will see a second birthday, but after such a surprisingly hassle-free experience, everyone there is rooting for it. 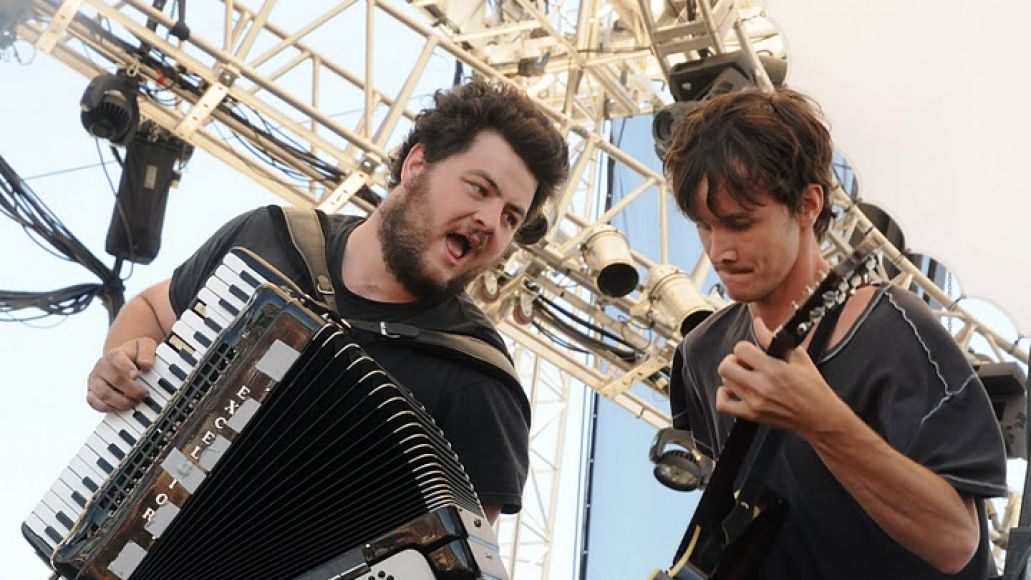 “What song do you want to hear?” accordion player James Felice asked the audience before their last tune, as if there was any question. Shouts for “Frankie’s Gun” rang out the entire set; if the band had skipped it there would have ensued whatever riot a bunch of baked Americana fans could muster (it would probably involve dejected mumbling). The meager gathering had reason to wait for that one song. Though the band’s other folksy rockers hit the right notes, they mostly seemed like poor imitations of the one song people knew, the one song they came to hear, and the one song that proved the Felice Brothers may be a band worth watching. They just need to write a second.

The jam band for non-jam fans, Umphrey’s McGee proved the Grateful Dead needn’t be a hippie’s only influence. Metallica and King Crimson hovered on the edge of the improvisational blast as hard-hitting drummer Kris Myers put his double kick drum through its paces. If you could make any other jam band louder, faster, and more distorted, they’d probably sound like Umphrey’s McGee. This wouldn’t be a bad thing.

Okay, now make that same jam band slower, quieter, and more acoustic. Enter Keller Williams. The happy-go-lucky hobbit bounced around the stage barefoot, putting on a one-man show that veered from solo acoustic to using loop pedals to build broader soundscapes. It’s a very in-crowd approach, elating folks who like ten-minute acoustic grooves and leaving the rest of us cold. 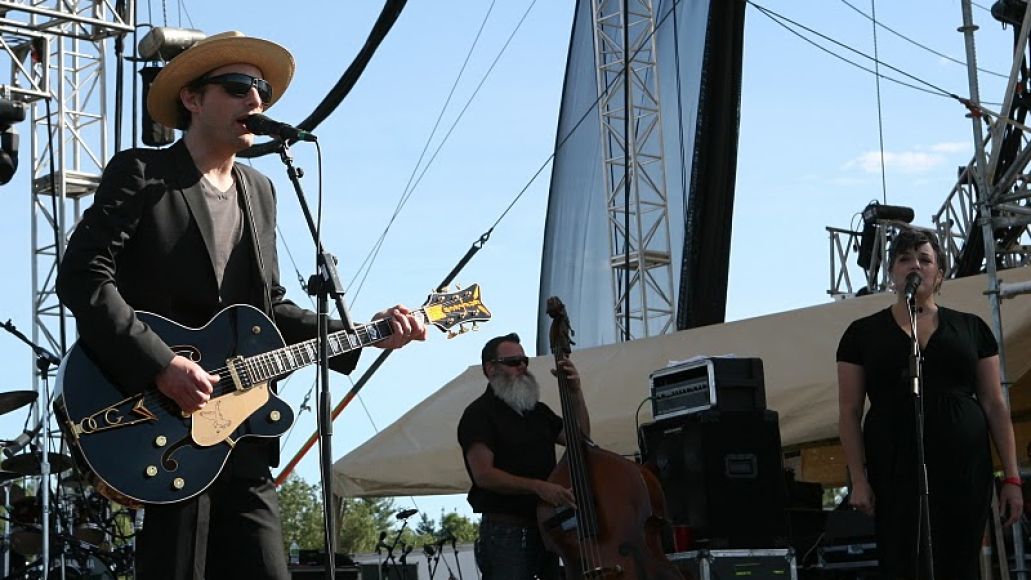 Poor Jakob Dylan. No matter where he goes or what he does, in some sense he’ll always just be Bob’s son. Give him credit for trying to branch out, though (see Zappa Plays Zappa below for the opposite extreme). After his tenure leading the Wallflowers, he has gone straight-up country, writing rural odes to life and love and whatever. With this Dylan, the lyrics aren’t the point. His tight band and backing singers brought generally mediocre tunes to life and infused the occasional oldie (“Three Marlenas”!) with a steel-guitar-and-moonshine sway.

One of the fest’s token nods to the indie scene, Passion Pit’s set benefited from Friday’s cool temperatures, allowing the daytime crowd to get a little loose. The Boston quintet seemed as happy to be there as the audience was to have them, playing through fan favorites with an enthusiasm that suggests they’re not yet entirely sick of “Sleepyhead” (or they fake it well). In a lineup not big on banter, frontman Michael Angelakos’ cheery rambling lent a personal touch to the packed show. 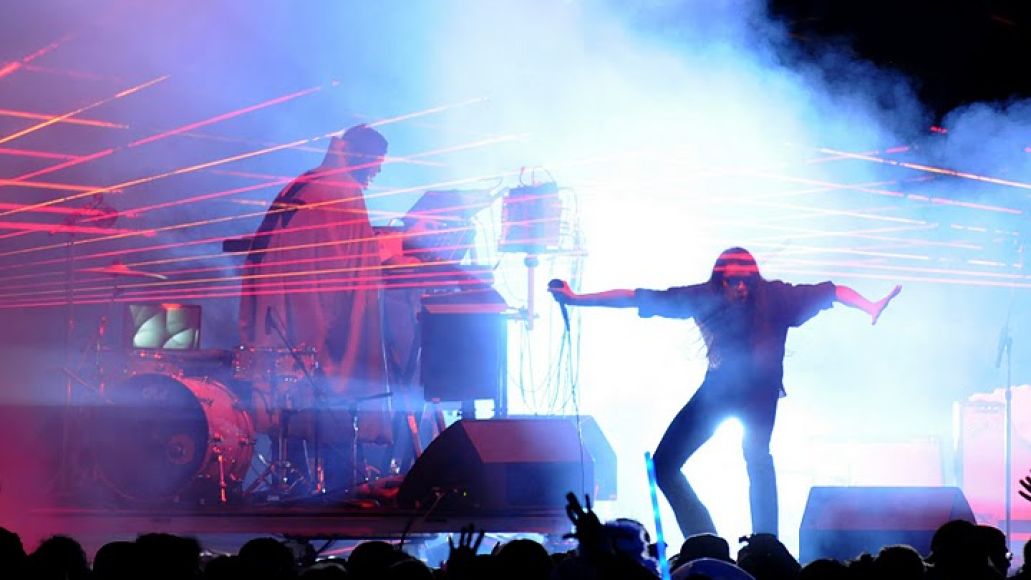 After Passion Pit loosened up the joints, Ghostland Observatory got them flailing with their dance-or-go-home electro. Famous for their laser-heavy live set, this Austin duo didn’t disappoint, doing things with thin beams of lights you didn’t think possible. Producer Thomas Ross Turner kicked out synth jams sporting a massive cape while frontman/sometimes guitarist Aaron Behrens twisted around the stage as he unleashed his serpentine seductions. The audience seemed torn between raving and taking in the spectacle, but with such a high energy show, no one resented the indecision.

This upstate New York quintet carries jam to the core, meandering along with frequent solos, digressions, and plenty of love-it-or-hate-it noodling. The Grateful Dead hover so obviously over these fests that covering them seems almost cliché, but cover the Dead they did, Keller Williams in tow, with “Deal”. The band curates their own festival in upstate New York and talk during the set indicated that more than a few fans will make the journey west in September.

Connecticut trio the McLovins (a Superbad nod that probably seemed cool at the time) packed the small Port City Music Hall stage, putting some hard rock crunch into their jam granola. Drummer Jake Hoffman led the band through tricky rhythm shifts as copious melt-your-face solos attacked from all sides. A definite contender for best jam band of the weekend. Oh, and try to forgive the silly name. After all, they’re only 15.

What started as a depressingly tiny crowd swelled throughout this L.A. trio’s set, listeners likely curious about who this amazing guitarist was. Trick question: There is no guitarist. Instead, singer Tony Beliveau hooks up one of his keyboards with some pedals and a massive whammy bar, blazing through psychedelic guitar riffs without ever leaving the ivories. The band closed with what has to be the hardest-rocking cover of “War Pigs” to ever go without six strings. 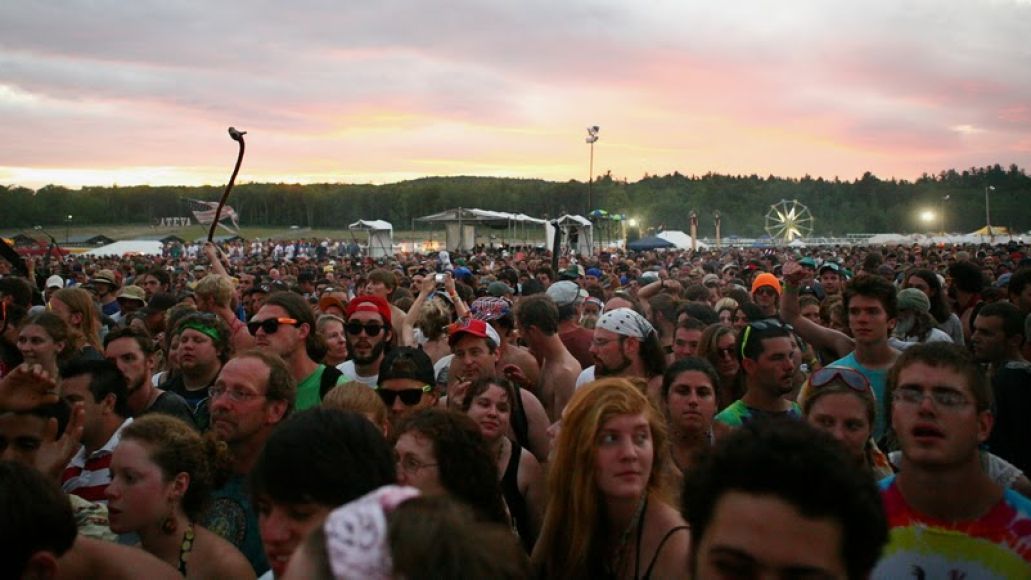 In the midst their cross-country trek opening up for Tom Petty, the Truckers brought their most good-old-boy rock side to Nateva. The band’s three-guitar assault gives their southern-fried rock some real cajones, though they could use a little more stage presence. Luckily Flaming Lips frontman Wayne Coyne provided more than enough visual entertainment as he took in the set sidestage wearing a giant grizzly bear head. 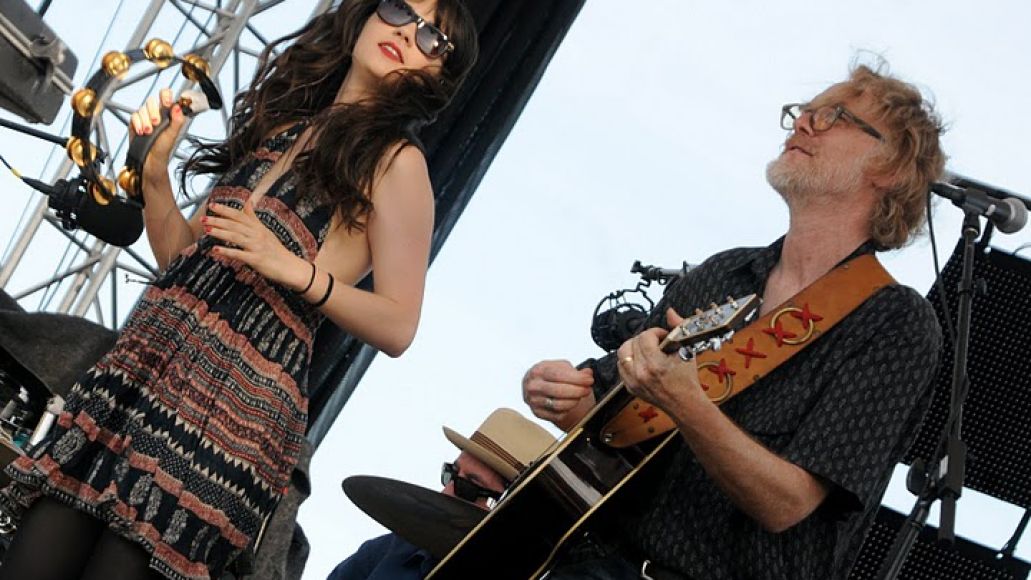 When half your appeal is based on pristine sonics, sound problems can be a real bummer. It’s hard to achieve a breezy Beach Boys vibe through blasts of bass distortion. Still, Zooey Deschanel and M. Ward led their three-piece backing band through a pleasant pop set that featured much of their latest album, Volume 2. M. Ward clearly runs the show, doing the heavy lifting while ceding singing duties to the better-looking (no offense, dude) Deschanel. Her pitch proved a bit shakier than on the record and her onstage charisma is zero, but for lying back in the grass under the afternoon sky, good vibes are enough, despite distortion.

One thing’s for sure: Grizzly Bear wins the award for prettiest soundcheck. No “one, two” garbage for these guys; they each tested their mics by singing their parts in various intricate harmonies. One of these guys needs to record some a cappella Sigur Rós covers, stat. After such a heavenly lead-in, the music itself seemed almost a letdown. 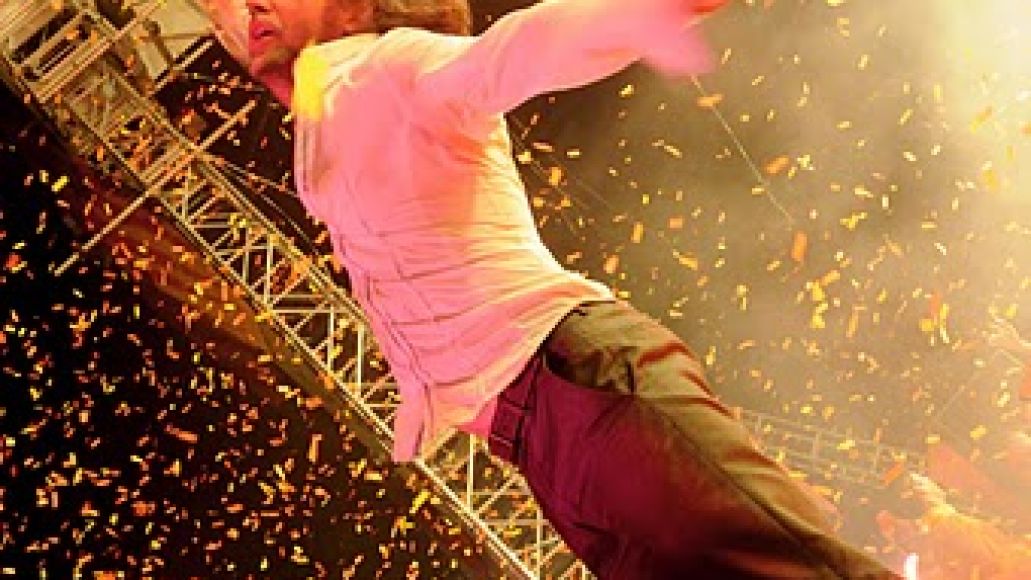 The sun set as STS9 hit the stage, and not a moment too soon. After a couple hours basking in the rays of indie-folk, some heavy dance grooves seemed just what the place needed to bring the evening in with style. An elaborate light show complemented the music, but most people seemed too busy dancing to pay much attention.

What’s left to say about the Flaming Lips? If you’ve ever seen them live, you know the story (and if you haven’t, you need to stop reading now and start planning a road trip). Unlike Bonnaroo’s Dark Side of the Moon performance, their set at Nateva was by-the-books Lips. The band entered the stage birthed from a giant glowing vagina, and things only got stranger. Frontman Wayne Coyne surfed the audience in a giant hamster ball. Ten-foot tall balloons bounced over the audience. Dancers dressed as traffic cones leapt around the stage. Coyne wore giant foam gloves that shot lasers. You know, the usual.

Holding the title of best tribute band in existence is kind of like being the world’s number-one Elvis impersonator. Doesn’t Dweezil Zappa ever want to play a song his dad didn’t write? The man’s an incredible guitarist (like his dad) and capable band leader (like his dad), but apparently the whole songwriting thing skipped a generation. Though no one sported fake Zappa mustaches, the singer who imitated Frank’s singing was about as irritating as when your friend demonstrates his “awesome” Bob Dylan impression. There’s honoring and there’s rehashing, and this band leaned a little too far to the latter. 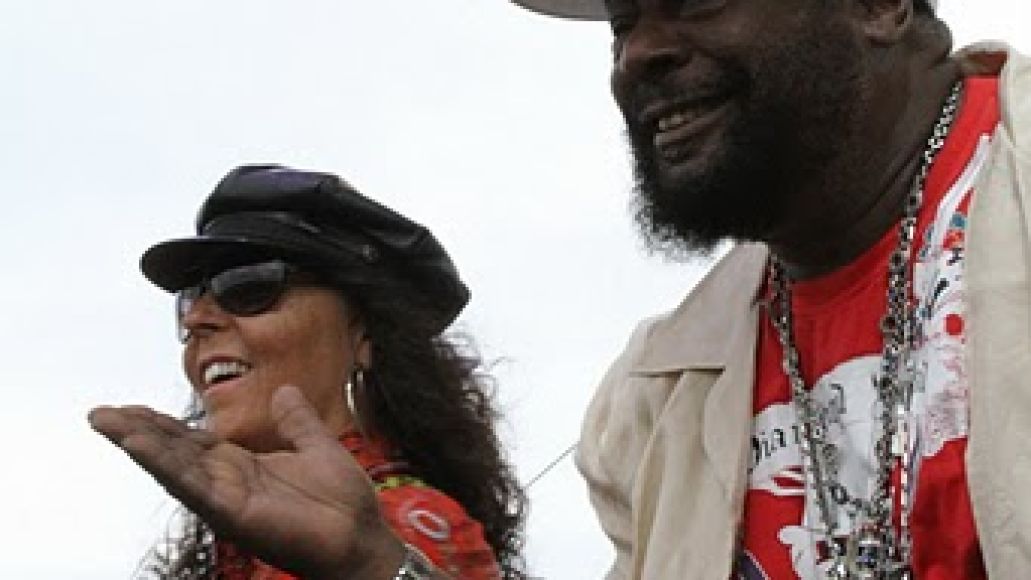 I had one question while watching George Clinton: Which one is George Clinton? Apparently I was not the only one confused. Call us uninformed, but the man is famous for his multicolored hair, bushy grey beard, and propensity for wearing beads everywhere, all the time. None of the dozen-plus people onstage exhibited these trends. Sure, there was the guy with the enormous nose mask (known as “Mr. Noze”), the girl dressed like the Mad Hatter, or the dude who wandered the stage writing audience instructions on paper (i.e. “Make some noizzze”). Turns out Clinton was the guy with the short, dyed-black beard dressed like a Fubu clothing model. Oh.

Former child prodigy, current honorary Allman Brother, and all around hot-shit guitarist Derek Trucks closed out with Stage Two with his wife as the Derek Trucks and Susan Tedeschi Band (not to be confused with the Derek Trucks and Susan Tedeschi Soul Stew Revival). Needless to say, Trucks’ slide was on fire, but only rendered everything else more forgettable. Pretty tunes for a summer afternoon, but nothing that sticks. They wash over you, but when they ended, they left nothing behind. 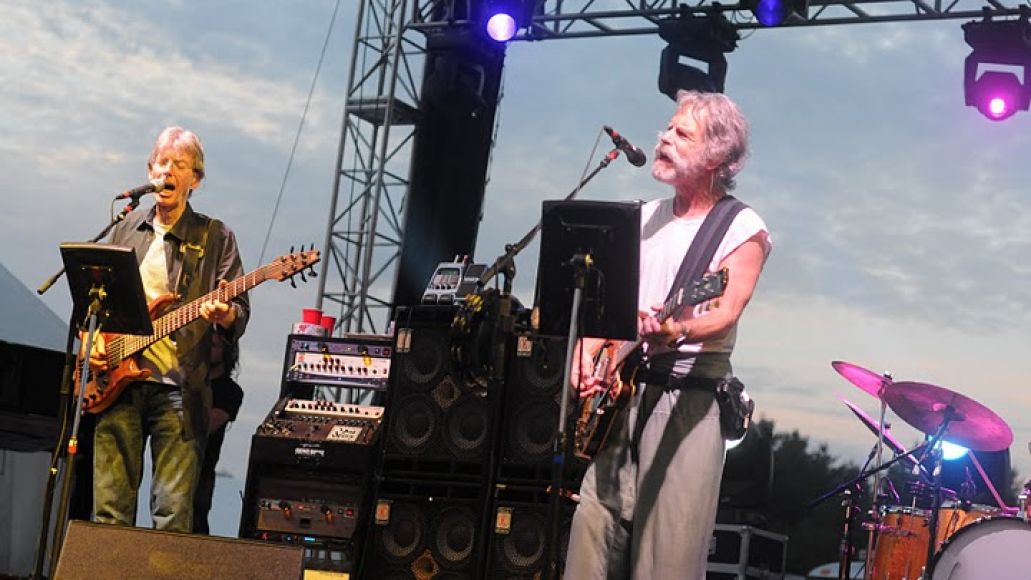 Furthur, the latest incarnation of the Grateful Dead, closed the event with a bang (literally). After spending the last year touring with the Dead proper, stripping the original members back to guitarist Bob Weir and bassist Phil Lesh could be seen as a step down, but the new band has one ace-in-the-hole to keep them from being Dead Lite: backing singers Sunshine Becker and Jeff Phearson. There are surely more glamorous positions for a singer – standing around idly for long stretches is part of a jam band singer’s job description – but when they did join in they turned the tunes into true songs, not just excuses to continue the jam. “Casey Jones” roared with fervor well beyond a concession to the casual fans and a cappella set closer “And I Bid You Good Night” draped the holy spirit over a dead-quiet field. Deadheads following the tour got a bonus treat with the Furthur debut of Phil Lesh & Friends original “Celebration,” which opened the show. Inevitable encore “U.S. Blues” got flags waving high through the final chord, which cued a fireworks display that must have cost half the fest’s budget. Worth it.

Clean Toilets and Long Jams: CoS at Nateva '10