Once upon a time nerds were the ultra-outcasts of society. Those fringe pop-culture loving, science and technology conscious, indoor kids – once bullied, once trod upon – are now rulers of the world. As Revenge of the Nerds 4 prophesied, the Nerd Child was born and a new age dawned. Respected for their knowledge, feared for their cunning, and now a major force in counter-culture, nerds are coming up in the world. In the United States, Orlando, Florida has become the hub for nerds – with A Comic Shop, one of the most talked about comic shops in the country, Full Sail University pulling in many would-be game designers, and Star Wars Celebration V coming to town next month, Orlando is a veritable nerd mecca. It’s only appropriate that it’s the site of the biggest Nerd music festival in the country, Nerdapalooza.

“Nerd music?” You ask, befuddled. “What the frak is that?” Perhaps you’ve heard of the “nerdcore” hip-hop scene of which MC Frontalot is part of, but MC Lars and mc chris insist they aren’t. Perhaps you’ve heard of the indie nerd musician Marc with a “C” or the rock outfits Shael Riley and the Double Ice Backfires, the Megas, or Kirby Krackle? Too obscure? How about Jonathan Coulton? The Aquabats? OK Go? Now you’re getting the picture. “Nerd music” is a diverse, many-headed beast confined only by subject matter, not style, and even then there’s just so much that’s nerdy. Nerdapalooza is where once a year the finest performers of nerd music come out and play. Last year, Wired‘s Geek Dad blog placed the Nerdapalooza music festival among the top five geek events of the year alongside San Diego ComiCon and PAX (Penny Arcade Expo) and this year it was rated the second best festival in Orlando, under the Fringe festival. Nerdapalooza 2010 featured 40 musicians over two days, plus the pre-party held at A Comic Shop the night before, and this year over 700 people attended. 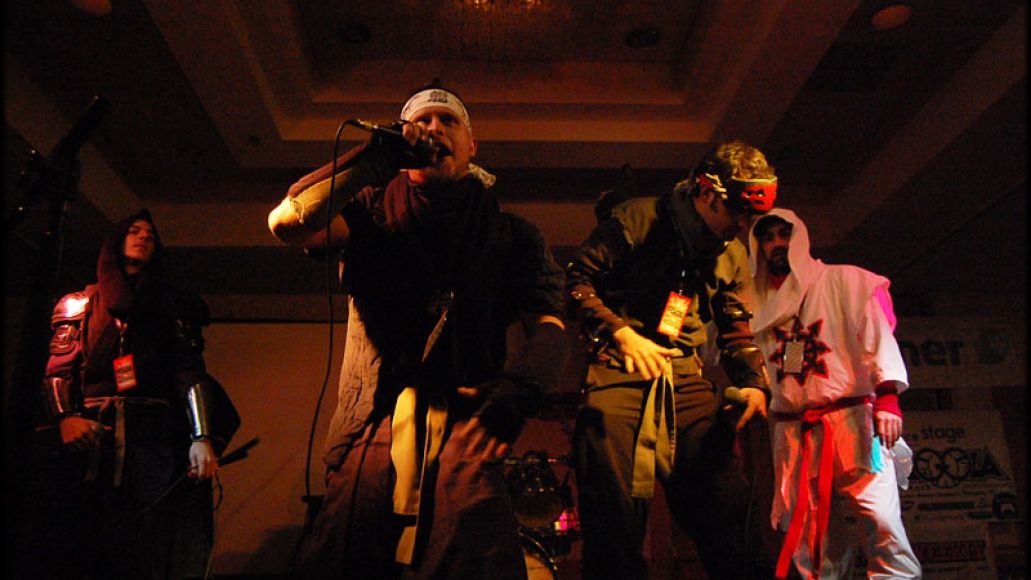 Something that might come as a surprise to the average festival goer, but not to the average nerd is the venue: a hotel convention center. Nerdapalooza 2010 was held in the grand ballroom of the Orlando Airport Marriott – two stages for continuous musical performances, with vendor booths in the middle. Despite the festival’s psychically small arena, taking in the whole thing was an overwhelming experience. So continuous, so high-energy, it was impossible not to need a break every now and then. But when you’re cooling down it’s easy to still have a good time – everyone has something in common, some mutual affection for some piece of pop culture being represented. It’s not as unnerving as an anime convention or seedy as a low-tier comic convention – it’s a music festival first and foremost.

Day one started out right with a healthy dose of nerdcore busting rhymes into the afternoon. With nerd rap there’s a diversity of themes, novelty, and spectacle you’re not likely to see anywhere else. In one afternoon alone there was the ninja rap of Krondor Krew and HD Ninja, the pirate rap of Captain Dan and the Scurvy Crew (a mythical rap battle is likely to happen between the two rival factions), My Parents’ Favorite Music held a game show in the middle of his set with audience participants and prizes, and the masterful rapping of Random aka MegaRan, whose rhymes are so good Capcom took notice and gave him the keys to Monsteropolis. All this rapping eventually gave way nerd comedy music from Devo Spice, who, along with The Great Luke Ski and Worm Quartet represent The FuMP (Funny Music Project) a group of afantastic musicians cut from the same cloth as a certain Mr. “Weird Al” Yankovic.

The later half of the day was devoted to nerd rock. Shael Riley and the Double Ice Backfires met with some technical difficulties, but performed excellently. Riley’s bewilderingly golden voice mixed with rock music always makes for a fine musical experience and despite the audio problems they soldiered on. Next was the white-suited George Hrab, a “skeptic” musician whose music tackles a broad subject matter, performed acoustic for Nerdapalooza. It’d be easy for the casual listener to mistake Riley and Hrab as “normal” musicians at face value or a passive listen. Unlike the nerdcore artists their music is less about making references and more about concepts. Though they could slip easily into an indie playlist (and do) these musicians know who their people are. Hrab’s set was inter-spliced with skits about odd and even numbers and he was delighted to hear attendees laughing at the math jokes with no explanation needed. Material he’d have to explain elsewhere was picked up on instantly by the nerdy crowd and performer and crowd alike was delighted. 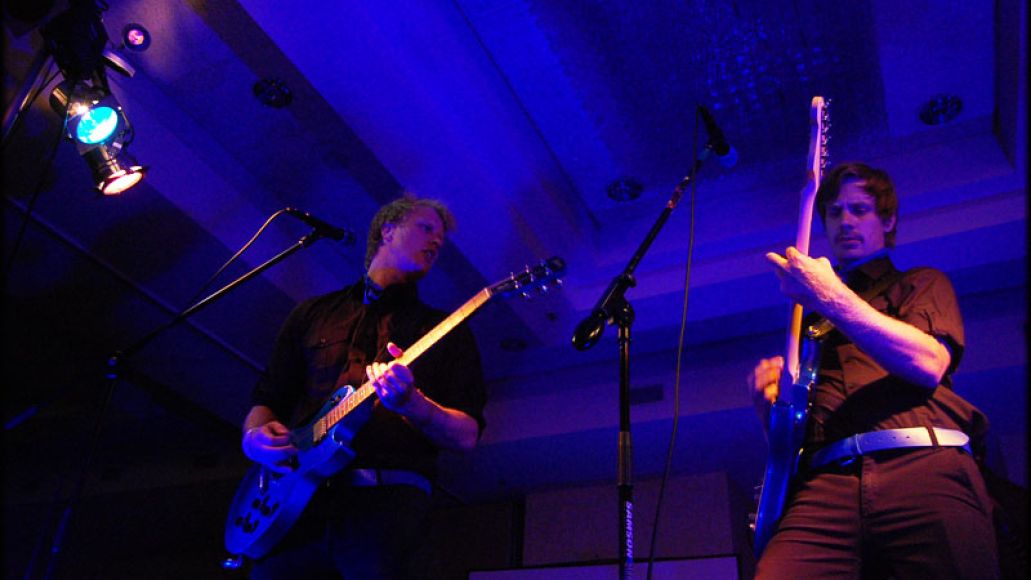 Harder rock was represented by Sci-Fried, a true-blue rock band whose recent single “Saturday Night on SyFy” actually has them now in talks with the cable network for future music deals. Kirby Krackle, an up and coming nerd rock band from Washington, made their first Florida appearance. They’ve been lauded by the comic industry and fans alike for awesome comic-book themed rock music. Unfortunately, distance and scheduling meant Kriby Krackle’s Nerdapalooza appearance was a one man acoustic set. However, the lack of shredding made for some great new spins on old favorites and a wonderful time, nonetheless. The only bit of nerdcore in the evening of Day 1 was Schaffer the Darklord. Shaffer is a beast on the stage. There are many terrific nerdcore rappers but none of them, none of them, have a stage presence that can beat STD. He rises like a dark-suited lawyer of the underworld and charms your soul with his quick tongue and devious stare. It was a glorious show as always.

Headlining Nerdapalooza was dystpopian rock opera sensation, The Protomen, on Day One and the godfather of nerdcore, MC Frontalot on day two, or at least that was the plan. As with all small festivals, serious delays have a tendency to crop up and the first day was no exception – almost four hours behind. Not only were The Protomen late to perform, but an unexpected bout with “food poisoning” left their lead singer and two their members incapacitated. This, however, didn’t stop them from performing not one but two incredible shows. The Protomen finally emerged at the end of the first day to play the six songs that didn’t require lead singer, Panther’s voice… plus one additional song. Out in the corridor, just as they were trying to figure out how to play their pivotal track, “The Stand”, without their keyboardist and singer, they heard that very song being played on a hotel piano out in the corridor. Behind the keys was a 16-year-old music prodigy whom the band dubbed “The Ringer”. They brought him onstage to perform the song with them. It was surreal. The Protomen were also joined by a costumed super-fan in the front row who pelted out a very death-metal sounding version of “Vengeance”. The next night, after an outstanding Frontalot show including an all-star performance of “Nerdcore Rising” with Random and Schaffer the Darklord, The Protomen returned in full-force for a triumphant and victorious show including a rendition of Styx’s “Mr. Roboto”.

Like any festival, Nerdapalooza had its highs and lows, but the lower-tier are not to be underestimated. Case in point, day two’s opening open mic performance has surprised the groggy concert-goers two years in a row. There’s always at least one act that comes out of no where and surprises you. It’s an exciting place to see who’s likely to get some stage time in the year to come. Another early morning eye opener was local Orlando outfit, Emergency Pizza Party’s Sunday Mass performance. They decked out the main stage with two crosses made of pizza boxes, a podium and choir robes all around, not just on them, but the troupe of rappers from Scrub Club Records who strode out into the audience, giving a communion of delicious pizza. Then there was the nerd synth of Super 8-Bit Brothers and Yip-Yip.  But the real kicker of Day 2 was ZeaLouS1 and the Bossfights. Fronted by well-known nerdcore rappers ZeaLouS1 and Dr. Awkward, the Bossfights don’t just take nerdcore to a new level, they do rap-rock right! The band only formed earlier this year and Nerdapalooza was their first major performance. No one was ready for it. Wired‘s Geek Dad has rated them among “The Top 10 Awesome Moments From Nerdapalooza 2010” and Nerdy Show voted them the Breakout Act of this years festival. 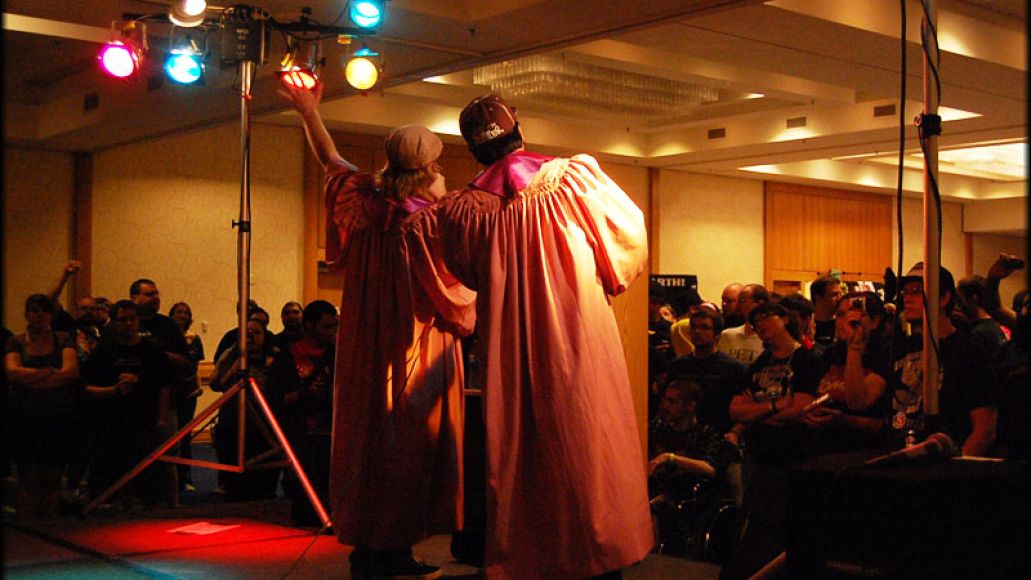 Another amazing and delight new to this year was Schaffer the Darklord and Nelson Lugo’s Epic Win Burlesque. Epic Win is an NYC-based troupe of lovely ladies who perform semi-regular neo-burlesque shows each themed around a nerdy subject such as cartoons, Batman, or Ghostbusters. Nerdapalooza was treated to an after-hours performance featuring some of the dancer’s favorite routines and greatest hits including performances featuring Princess Zelda, Faye Valentine, Schoolhouse Rock, Gozer the Gozarian and gender-bended Rorschach and Riddler. When you’ve seen the Riddler strip down to a set of sequenced question marked pasties and a merkin you know you’ve been transported to a whole other world of outstanding nerdiness.

This young festival is on the move – upward and outward, ready to expand to bigger, potentially outdoor venues, but this year’s Nerdapalooza is an important stepping stone. None other than massively influential 80s hip-hop act The Fat Boys, started an internet campaign to be invited to Nerdapalooza – five days before the festival. Too soon to come this year but definitely an act to watch out for next year. Attending Nerdapalooza is still very much a family experience. When the festival’s founder, John “Hex” Carter gets on stage and belts out “Hi I’m Hex!” the whole room returns loudly “Hi Hex!” It’s a community. Once spectacular aspect of this close-knit experience is that it’s not just for the concert goers, but the artist as well. There’s no boundary between fan and performer. Everyone’s there in the same room together and everyone’s thrilled to get to know one another or even form a freestyling circle outside for spectators to watch or join in on. It’s beautiful. Who knows how long this idyllic experience can last. The bigger the show gets the harder this aspect will be to maintain. But one thing is for certain, there’s nothing else like Nerdapalooza out there and it’s certainly a festival to watch out for.

Be sure to tune into:

Gettin' Down and Nerdy: CoS at Nerdapalooza '10