Without a doubt, the most enchanting, romantic place to be in Wroclaw, Poland on July 22nd was Mike Patton’s Mondo Cane concert, held on the river island of Wyspa Slodowa. As dusk approached the scenic venue, the colorful concert lights bathed the nearby trees and the Odra River’s cooling breeze took the edge off of the stifling heat which earlier had the city staggering to its knees.

This was the first concert of Mondo Cane’s European tour, and the first performance since their highly-acclaimed album was released in May. Patton may be best known for being the enigmatic frontman of Faith No More, Tomahawk, FantÃ´mas, and Mr. Bungle, to name but a few; however, Mondo Cane is without a doubt the largest departure for an artist who specializes in the “art of weird.”

Mondo Cane has no new material. The entire concept rests behind the re-imagining of classic 50’s and 60’s Italian pop songs, sung by Patton and performed by an orchestra. The strings section of this concert was performed by 12 Polish musicians of the Wroclaw Film Harmony Orchestra, and this same section changes artists in each new concert location, providing constant challenges with regards to rehearsal. 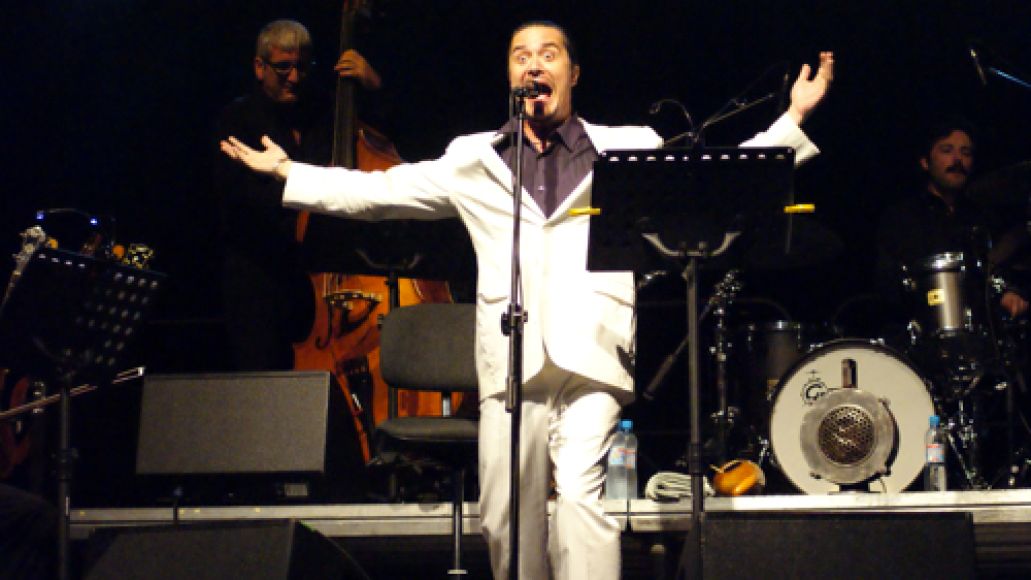 None of those challenges were present on that Thursday night, however. Sure, the seating arrangements for the show were a bit awkward – the section directly in front of the makeshift stage were reserved seats which sold out fairly quickly and the standing only section skirted around the sides, not offering the best view for the majority of the concert-goers. On the other hand, the entire city got to hear the music because of its open-air setup.

And what beautiful music it was. Patton, with his dark hair slicked back, dressed in a sharp white suit and black shirt looked like the perfect 50’s Italian Lothario. He commanded the stage even just standing there, a look from him expressive eyes bringing cheers from the enthusiastic crowd. His voice was in perfect form, effortlessly allowing him to sing the insanely high parts of songs such as “Deep Deep Down” and the gruff, gravely growl of “20 KM Al Giorno.” 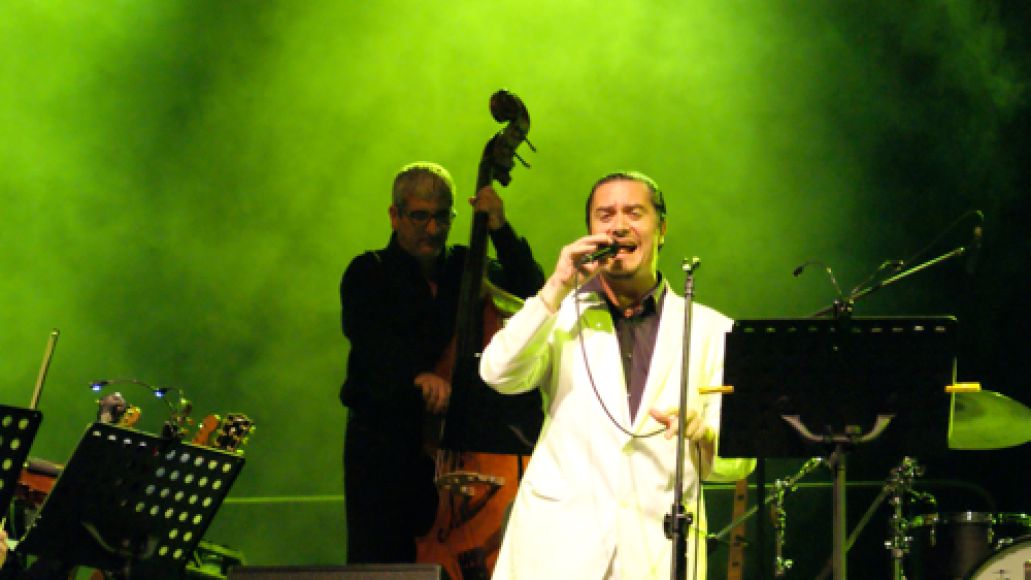 The set list pretty much followed the order of the album, with about 10 additional Italian songs thrown in. Some of the lesser known songs like “Dio Como Ti Amo” were a bit more experimental, with a plethora of atmospheric sounds and noises such as dolphin clicks and rainmakers. There were plenty of crowd favorite’s such as “L’Uomo Che Non Sapeva Amare”, “Che Notte” and “Senza Fine,” the former which brought a tear to my eye as its haunting notes traveled high up into the starry, cricket-filled sky. Looking around at the crowd behind me, I could see I wasn’t the only one who was having a truly emotional experience.

Of course, it wouldn’t be Mike Patton without the appearance of his infamous megaphone and trademark screaming. The show’s harder tracks such as “Urlo Negro” really got the place moving around, perhaps to the surprise of some elderly people in the audience. Patton was in manic mode, screaming into the microphone and squatting around the stage. No surprise, these songs brought out the most applause from the Faith No More fans. 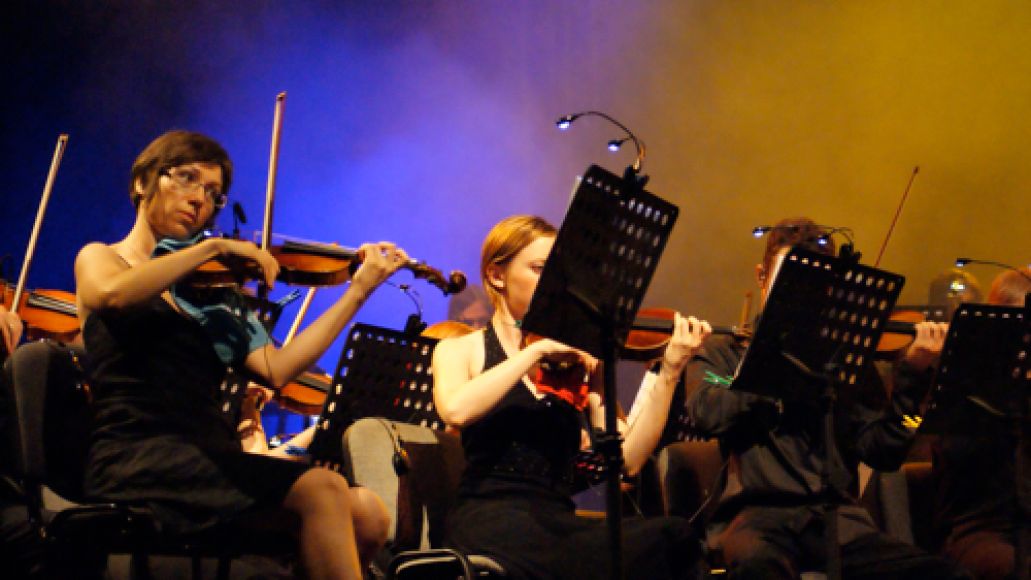 Throughout the show the connection of the orchestra was tight, their transitions seamless and their mood was glowing. The Wroclaw violinists were all smiles, egged on by some hammy eye contact from Patton and there was a lot of playful camaraderie between the band.

The crowd was pretty much what I expected it to be. Well-dressed locals who came to listen to moving classical pieces and a Sinatra-esque crooner, as well as hard-core Patton fans decked out in Faith No More and FantÃ´mas t-shirts. What I didn’t expect though was how well the audience received the performance. There were cheers, yelps, and claps after every song; you could feel their energy seeping into the players on stage. 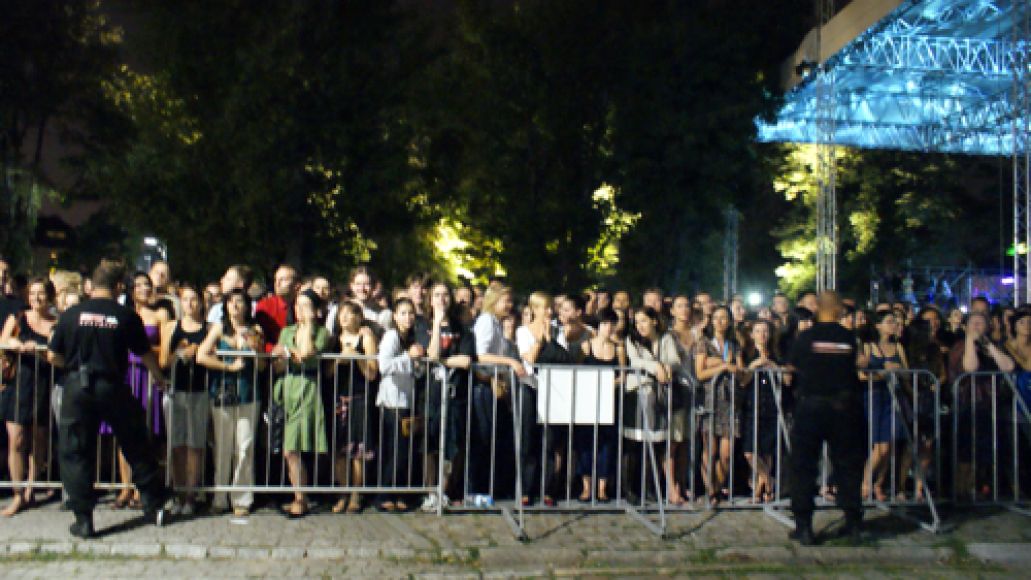 When the last song was played there was a standing ovation that lasted more than a few minutes. Even 10 minutes later when it was obvious it was all over, there were hundreds of people lined up outside the gate to the backstage area, all of them hoping for one last glimpse of the man who made this evening so memorable and so magical.