“Free Music Turns Into All-Out Warfare” is also a title I was considering for this article, and it would have been more than befitting. Last night was Salt Lake City’s  inaugural 2010 Twilight Concert Series show, which marked its moving  from The Gallivan Center to Pioneer Park. The move was rough to say the least. I, and 39,999 (by The Salt Lake Tribune’s estimate) others, found ourselves trapped in a logistical Hell.

In previous years, the Twilight Concert Series has run without a hitch; sound and lighting were great, lines of sight were perfect, performers were great, crowd had a good time. After four years of putting the series on, the organizers had things down to a science at Gallivan. Simply put, I think they were just caught with their pants down last night by the massive venue change. They didn’t know what to expect, and thus couldn’t anticipate the sorts of problems they ended up running into.

Logistically, the night started out poorly and continued to slump downward. With very few entrances/bag checks, people were forced to wait in lines that were up to two city blocks long to gain entry to the park. Once inside, they were faced with a sea of human bodies that were all trying to make their way somewhere. With no clearly marked signs or workers to point people in the right direction, nobody knew where to find bathrooms, food, drink, first aid, press, merch, or even the stage for that matter, which was hidden by a thick veil of wild, untamed trees.

The families who had come out to see the show and set blankets for their toddlers to sit on were forced out of their places by the massive amount of people bent on standing closer to the show. The people who came to the show as casual attendees ditched the notion of trying to get close, and stood in the back where there was some breathing room. People literally started scaling the many tall trees in the park to get a better view, causing a much unneeded headache for the stretched-too-thin security.

Many gave up entirely and left the relentlessly overcrowded venue before Modest Mouse even went on. When they did go on, pandemonium struck and the crowd started getting rowdy. I was in the photo pit (which was tiny and manned by only four security guards) and I was able to catch what was going on up front. Fainted girls and belligerent boys began to be tossed over the front barricade by the dozens, making my job snapping photos extremely difficult, and making the jobs of the security guards way more than they had bargained for.

Eventually, the crowd reached capacity and security wouldn’t let anyone else in, much to the dismay of the late arrivals. But, since there wasn’t much security, people began to jump the fence or even tear portions of it down completely to gain access. The ridiculousness of the entire ordeal peaked during the encore when one excited fan made it past the barricade and attempted to rush Isaac Brock. Brock wielded his guitar in a protective stance ready for anything, but security grabbed the rogue fan at the last second. I’m convinced Modest Mouse would have played longer were it not for this idiot’s actions. Brock left the stage for good after addressing the situation: “We had a good time, and I hope you all did too. Respect the performers, though. That was off-putting.”

It was truly out of hand. Far too many people (40,000?!? Even if that’s a remotely true estimate, that’s insane. The Utah Jazz’s Energy Solutions Arena seats 20,000, for perspective) and bad security work made for an atmosphere that was terribly difficult to enjoy. 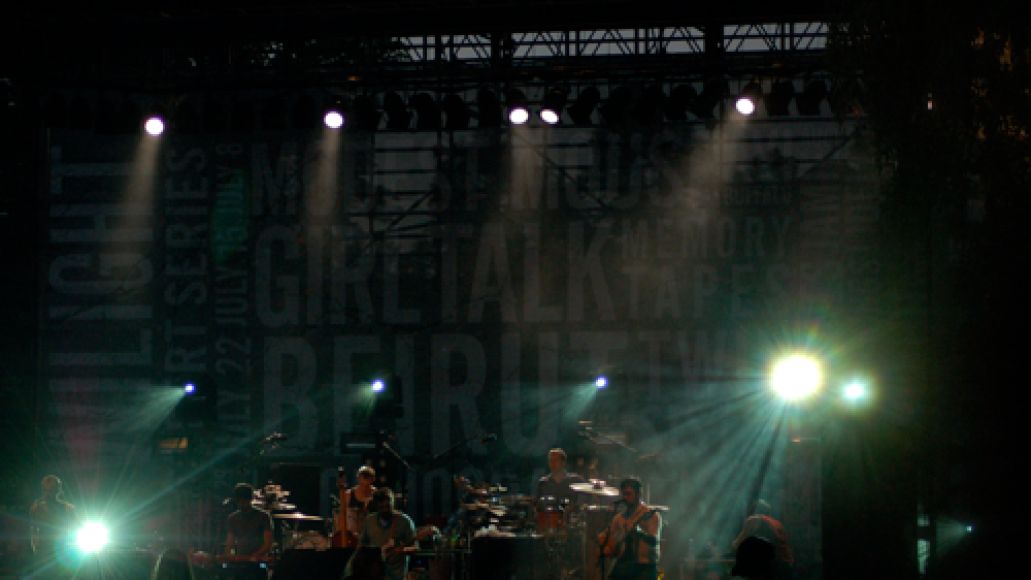 The redemption of the night? The music. Musically speaking, things could not have gone any smoother. Avi Buffalo came out ready and willing to play to what I’m sure was one of the biggest crowds they’ve ever encountered. They were fearless as they ran through songs from their incredible self-titled debut, and they impressed all who were unfamiliar with them with their youthful exuberance and spot-on musicianship. The very young band (does it piss anyone else off in a good way when kids right out of high school hit it big and you’re into your twenties and haven’t done anything noteworthy in you life?) looked tiny on that big stage in front of that big crowd, and I was feeling nervous for them, but they delivered with gusto. They played such hits as “Summer Cum”, “What’s In It For?”, “Truth Sets In”, and “Where’s Your Dirty Mind”, and primed the already pretty primed crowd for Modest Mouse.

Modest Mouse came out with the big guns, jumping directly into Moon & Antarctica’s “Paper Thin Walls”, which led them into newer hits “Fire It Up”, and “Dashboard”. And “Fire It Up” they did: the sweaty mass of people starting going insane at the opening riff to “3rd Planet”. They used their momentum to propel themselves forward into the night, not even breaking to introduce themselves until 8 songs in.

There was minimal crowd interaction from Brock and his boys (except for the bull-rushing that came later), but it didn’t matter. The band careened aimlessly through their unendingly deep back-catalogue, hopping from 1998’s “Dramamine” to 2007’s “Parting of the Sensory” to 2000’s “Gravity Rides On Everything”. The jumps were impossible to predict, and sort of erratic, but it didn’t matter to anyone in attendance. Modest Mouse is a band that has been good for over a decade and they only seem to get better with age.

The night peaked when they played their biggest mainstream hit “Float On” and everyone chanted along with the song. It made the whole struggle of a night seem less awful for a few brief moments. The whole city of Salt Lake seemed to become one as fists pumped and vocal cords strained to shout out the eternally catchy chorus. But then it was back to earth and the harsh reality of having dozens of people simultaneously penetrating your comfort bubble.

All in all, I give the show a favorable review. The bands could not have been better. First the up and coming Avi who showed us all that the future looks bright in their world, and Modest Mouse who showed us that some things are better with age. I’m confident that the Salt Lake Arts Council, who hosts the free series, will make all the necessary changes to accommodate the crowds for next week’s show: Memory Tapes opening for Girl Talk. Even if it is another fiasco, I had a good enough time at Modest Mouse to brave the crowds once more to party with Greg Gillis.

At the very least, this show was incontrovertible proof that SLC is really coming into its own, musically. Expect great things to keep happening in SLC, especially as the Twilight Concert Series rages on.

Setlist:
Paper Thin Walls
Fire It Up
Dashboard
3rd Planet
Here It Comes
King Rat
The Devil’s Workday
Dramamine
Bury Me With It
Blame It On The Tetons
Here’s To Now
Fly Trapped In A Jar
Float On
Parting Of The Sensory
Gravity Rides On Everything
The View