The stage after a recent show by The Slew looked like The Clash might have just played there. The drum kit had been kicked forward onto the floor, the keyboard was balanced precariously on its side, and beer bottles were scattered haphazardly throughout. It definitely didn’t look like it was DJ Kid Koala who had just finished his set, but I guess that’s what you get when you have two ex-members of Wolfmother as your band’s backbone.

The new project by Kid Koala, aka Eric San, The Slew, played to an eclectic and enthusiastic crowd at Vancouver’s The Commodore Ballroom on Tuesday as part of The Vancouver International Jazz Festival. Sure, there were a lot of people there who clearly thought they were partaking in a more jazz-oriented event (and they left looking quite shocked), but the rest were a mix of Kid Koala fans, Wolfmother fans, and everyone else in between.

The bass-rumbling, toe-tapping UK band The Heavy were the openers and set the night off on the right note. I don’t think I’ve ever seen an opening act that so consistently keep a crowd engaged. Vocalist Kelvin Swaby’s interaction with the audience definitely influenced how high people were dancing and jumping around on The Commodore’s spring floors, which reached a raucous crescendo when they ended with their biggest hit, “How You Like Me Now?” The answer was, “very much” and I wouldn’t be surprised if The Heavy came back as headliners next time.

Taking it down a notch, San did a few solo songs before the rest of The Slew came out. It’s easy to see where San got his Kid Koala moniker from; The petite man is absolutely adorable, yet his sound is anything but. Watching him put a few of his bigger songs through the paces, such as “Drunk Trumpet”, and his mother’s favorite song “Moon River,” one can’t help but wonder how he gets the sharp koala-like scratches out of Henry Mancini’s classic. 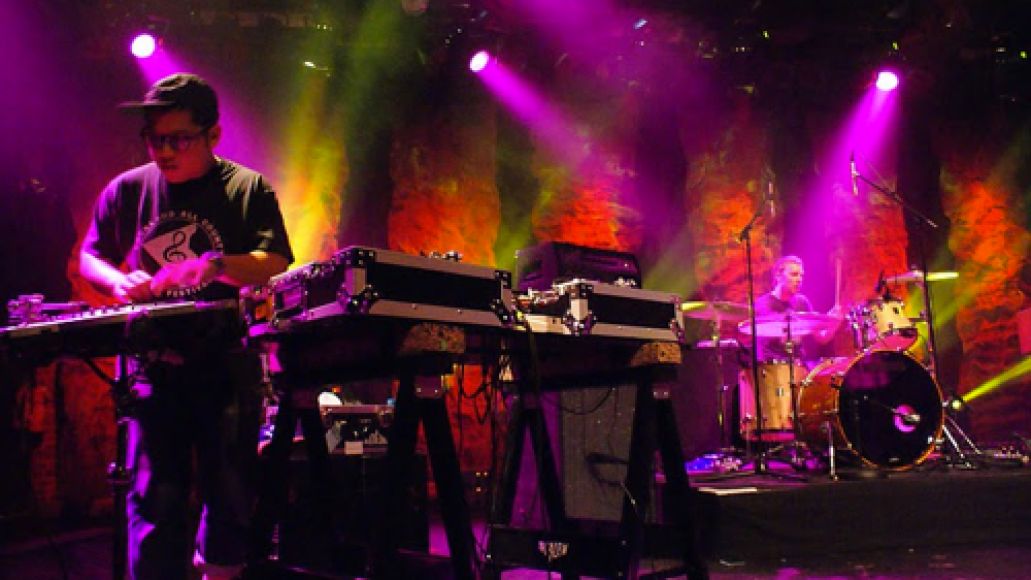 To watch him work the turntables (there were six in total)–with that ever present smile on his face–was absolutely fascinating, which was a huge plus, considering most DJ shows aren’t the most entertaining to watch. That said, I was happy when bassist/keyboardist Chris Ross, drummer Myles Heskett, and touring DJ P-Love came out to join him–time for some rock ‘n’ roll.

The band opened up with the album’s title track, “100%”, which was a fitting introduction to their hybrid of blues, rock, and expertly mixed samples. They pushed it at 100% the entire show. 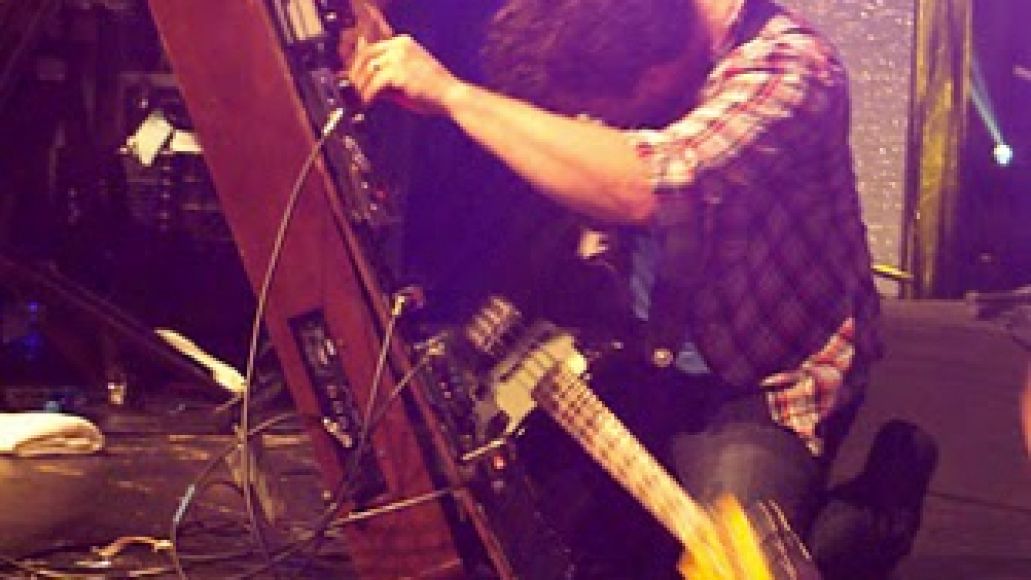 San and P-Love were happy to scratch and spin in the corners while Ross took over the stage as a strutting and dipping frontman. If Ross ever felt he was overshadowed by his previous bandmate, Andrew Stockdale, he was surely getting it all out now. When he wasn’t leaping around, teasing the crowd, or serenading Heskett, he was going at his keyboard like he wanted to tame the thing, riding it back and forth, like Elton John on Meth.

Heskett provided the hard-hitting drums that propelled the songs forward in the same sequence that appeared on disc. The sound had the audience jostling around as wildly as they had for The Heavy. During the more rocking songs, such as “Robbing Banks (Doin’ Time)” and “It’s All Over”, there was almost a glorified mosh pit, something not uncommon at previous Slew shows.

The Slew’s encore was one of my favorite songs on the album, the moody and rolling “Battle Between Heaven & Hell”. Ross had taken his bass and keyboard to the ground, as had San with one of his turntables. With the walls behind them lit up with images of waving flames, it really looked like there was an epic battle going on between the two – only which one was Heaven and which one was Hell? And who would win?

With San’s angelic persona and wicked skills it would be fair to say that there was no winner, just an intense and magnetic performance that pushed the boundaries of music and sound and had the Commodore crowd in its clutches. The Slew not only lived up to their album name, they surpassed it. I’d call it 110%.