The Lyric Theatre sits in the heart of downtown Blacksburg, Virginia across from the campus of Virginia Tech. It has existed in its current location since 1929. Prior to that, the theatre had two other locations, both just up the block from its current home.

The theatre’s current location was chosen by its founders after it was decided that the venue should be re-designed to house a sound system in order to show “talkies”, aka films with sound. The newly designed theatre featured a state of the art sound system, an orchestra pit, and air conditioning. Upon its completion, the Lyric was one of the first theatre houses in Virginia to show sound pictures.

The Lyric was designed by Roanoke architect Louis Phillipe Smithey, blending the architectural styles of Art Deco and Spanish Colonial Revival. Included on the outside of the building were the traditional masks of Comedy and Tragedy. These masks adorned the theatre’s parapet until the mid-1950s, at which time they were removed for fear of being a danger to pedestrians. Upon the Lyric’s renovation in the late 1990s the masks were replaced.

Over time, the theatre has existed as a first run and second run movie house, a classroom for Virginia Tech, and as Democratic Party Headquarters. In the early ’90s, after the theatre had been closed for almost five years, some of the local citizenry and downtown merchants created a The Lyric Council with the intent of resurrecting the theatre. This was finally accomplished in the spring of 1999 when the theatre was re-opened full time. 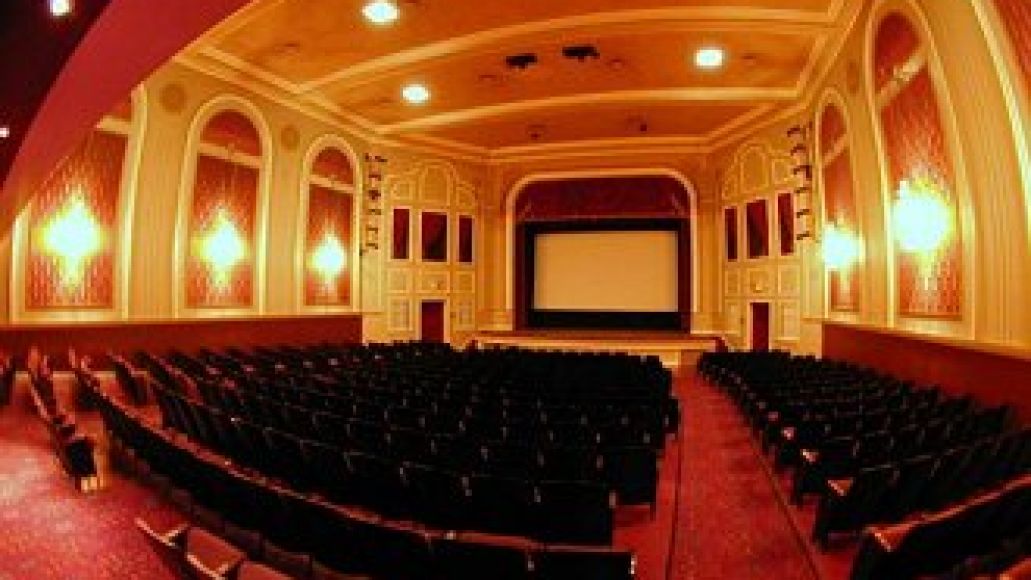 When you walk into the Lyric the first thing you come across is a vintage ticket booth and a restored lobby similar to what it looked like decades ago. Wrapping around the booth you see the concession stand, complete with the typical movie novelties – drinks, candy, and popcorn on the right (no alcohol is sold at the Lyric unless for private functions) and stairs to the balcony on the left. On either side of the snack counter are doors to the body of the theatre.

As you enter the auditorium, coating the room is a golden glow of light from replicas of the original metal lanterns that hung from the ceiling in the first few decades of the Lyric. The original lanterns were removed during the theatre’s renovations in the ’50s when a new CinemaScope screen was installed. Along the walls are vintage tapestries from the 1930s expertly mirroring the originals from the theatre’s early years. The stage sits directly in front. The orchestra pit has long been removed and some extra seats were added during the last renovation period 10 years ago.

All events at the Lyric are seated, regardless if it’s a concert, theatre, movie, or spoken word act. Of course, dancing is encouraged and during many performances (such as the recent Eddie From Ohio and Gogol Bordello) the audience is drawn up out of their seats and the place can become one giant party. On the other hand, sometimes it’s great to just sit and watch artists like Gillian Welch and Dave Rawlings or Daryl Scott do their thing. Performers such as Sam Bush or Junior Brown (and especially Gogol Bordello) often like to interact with the audience and welcome the give and take. Perhaps due to the seated environment, the majority of musical acts do tend to favor the Americana genre, with the audience attentively seated. However, with artists like Gogol Bordello, Sixpence None the Richer, and Matisyahu, the theatre proves that it’s open to diversity in its musical palette.

Recently, The Lyric has grown to become a highly integral part of the downtown scene in Blacksburg, opening its doors to student groups like Hillel who hosted Matisyahu, the VT film department for a student film festival as well as local arts groups.  Films shown at the Lyric are mostly foreign, second-run or art-house and are a great way to keep up with the best of those styles.  All films are shown every night with the exception being another form of entertainment such as a concert or play.

As the Lyric enters its 100th year, a few more renovations, such as improving the current theatre sound system, are still being planned. With the growing success of the theatre and the loyalty of its patronage, the Lyric may well be around for many more decades to come. The Lyric is not only a great place to see a show, it’s also a piece of living history.

Where We Live: The Lyric Theatre - Blacksburg, Virginia