Words cannot express how many of my orifices were violated by random body parts last night. Not to mention the bumping and grinding, the groping and squeezing. It was rough, it was sweaty, and it left my hips bruised and tender. The result of a hot date? You could say that… a hot date with Chromeo and a brazen crowd at Wednesday night’s Commodore Ballroom show.

Chromeo shows are known for their ability to get people dancing, even if the dancing borders on an animalistic mosh pit. So I kind of knew what to expect going into this Montreal funk/pop duo’s show – after all, it was their recent Lollapalooza appearance that brought about a green guy ( ala It’s Always Sunny in Philadelphia or the Vancouver Canucks) humping/riding an inflatable dolphin while crowd-surfing. And while the green guy and the dolphin didn’t show up this time, there were enough crazy, pumped, drunk Chromeo fans at this sold-out show to more than make-up for it. In fact, I’m fairly sure if the green man had made an appearance, his dolphin would have been popped in seconds. 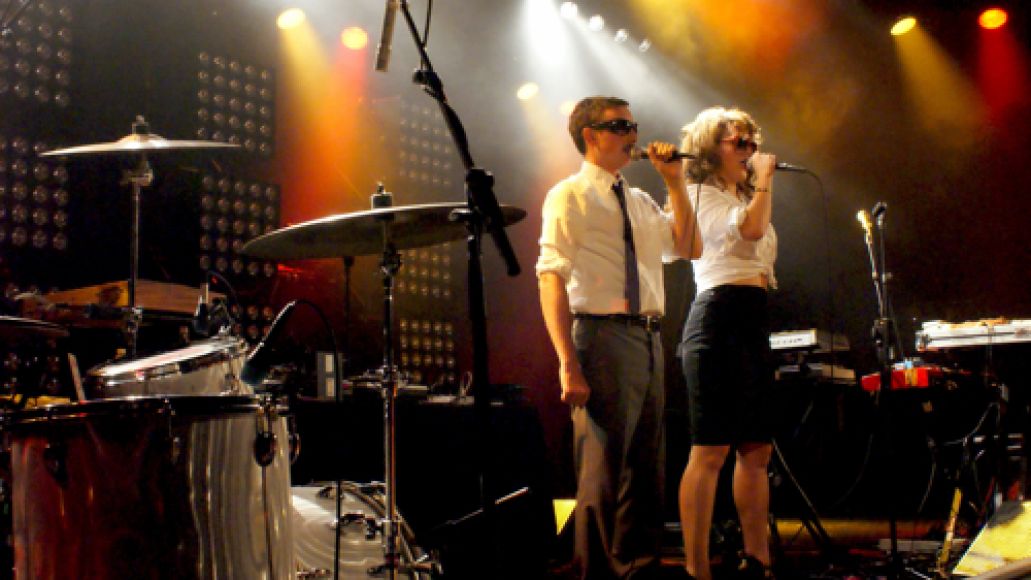 How did the crowd get to these intense levels? The first opening band, Telephoned, certainly laid out the groundwork. This New York band with Maggie Horn on vocals and Sammy Bananas as the DJ, specialize in their unique mix of danceable covers. Only they can’t really be called covers – basically they take a song, such as T-Pain’s “Can’t Believe It”, which first garnered them attention back in 2008, and add their own twist to it, making it a mashable, danceable underground jam that seems just familiar enough that you can sing along.

They were a bit slow at first in getting the audience moving but they soon picked up steam when Horn changed into a sexy “Business Casual” outfit and covered “Night by Night”, both an ode to Chromeo’s new album. By the end, everyone was dancing and jumping around just as high as Horn was on stage. This feisty, likable singer definitely helped sell the entire performance.

There was no photo pit for this show, which can be both a good and bad thing. Good in that you aren’t restricted to shooting only the first three songs which is usually the norm when it comes to covering shows. Bad in that you have to fight with the crowd to get the best spot to shoot. I took the opportunity to squeeze my way up front beside another local photographer before the second opener Holy Ghost came out. I’m glad I did because there was no way I would have been able to get any shots had I waited. The crowd was already that packed and that intense. 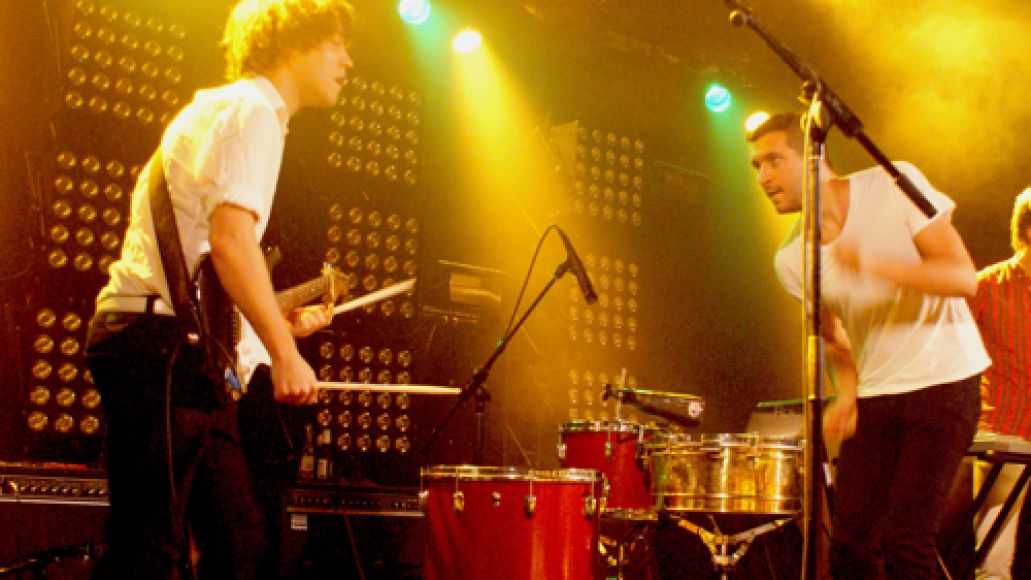 Which was good for Holy Ghost. Nick Millhiser and Alex Frankel had no problems in getting their disco punk dance grooves to connect with the audience. The inclusion of a cowbell brought about “More Cowbell!” yelps and when Millhiser and Frankel began dual drumming at each other, one couldn’t help but compare them to LCD Soundsystem – little wonder since they are on James Murphy’s DFA label and had been opening for LCD this summer. If Telephoned laid the groundwork, then Holy Ghost was building the foundation.

On to Chromeo. The restless and hyped up crowd chanted “Chro-Me-O” (you know, Wizard of Oz style) mercilessly and as if the floor couldn’t get any more packed, it somehow did. I was literally squished against the stage, my internal organs feeling the pressure and the contents of my stomach feeling dangerously close to being upchucked on the set list. 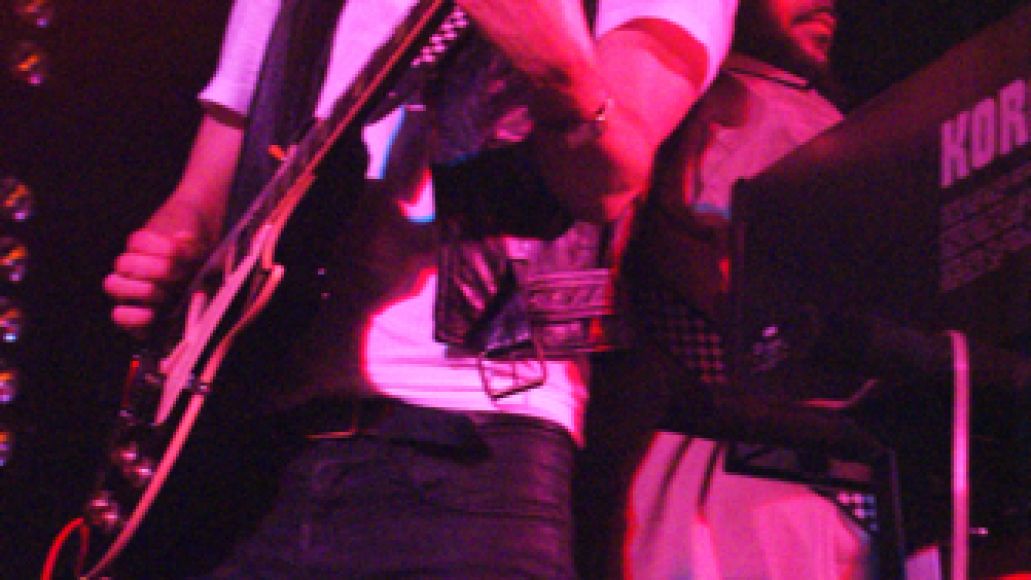 Then the actual music started. A smiling Dave 1 (David Macklovitch) and P-Thugg (Patrick Gemayel) took their “leg stands” and opened with a song from their new album Business Casual, “Contagious.” Despite the fact that the song hasn’t been released yet, it was, well, contagious. The crowd pressed forward and soon I had elbows, hands, groins, butts and heads cemented all over me in a “hot mess” – which, fittingly was the name of one the new tracks that the duo dropped. I know I said that Matisyahu’s show the other night was rowdy but this far surpassed that. In fact, I’m pretty sure this mosh pit was on par with the Coachella Faith No More/Muse sweat fest I succumbed to back in April. Only this mosh pit was also a dance pit, which meant more opportunity for drunk girls to spill drinks down your back and to have waving hands slapping you upside the head.

But did I have fun? Hell yes. How can you not at a Chromeo show? Dave 1 and P-Thugg really, really enjoy the music they create and you can tell with every wicked 80’s riff Dave 1 squeaks off of his guitar and with every voice-boxed note that P-Thugg sings. These guys love what they do and they do it well and no one knows this better than their die-hard fans. Considering how many people were singing along, to every word, in almost every song, I would gather that most people in attendance were true fans. I think the guys recognized that, too.

“This song is for everyone who was supporting Chromeo from the beginning,” Dave 1 announced to raucous cheers and cries before delving into “Opening Up”.

They played all of their hits, including the fun, crowd favorite “Tenderoni”, “Needy Girl” (complete with puns from Dave 1 about how needy the audience was), “Turn the Lights On”, “Night by Night” and “Fancy Footwork”. The latter was a real treat to watch as Dave 1 and P-Thugg did a “two step” in unison. The two often played off of each other during the show like the old buddies that they are and when they weren’t serenading each other, Dave-1 was rocking at the end of the stage to all his adoring fans. He wanted them to be as part of the show as he was. Same goes for Millhiser from Holy Ghost – during “100%” he was invited on stage to bang away at the cowbell with Dave 1 and then returned to the side stage with enthusiastic high-fives from his band. Seems even their tour mates were as excited about Chromeo as everyone else was. 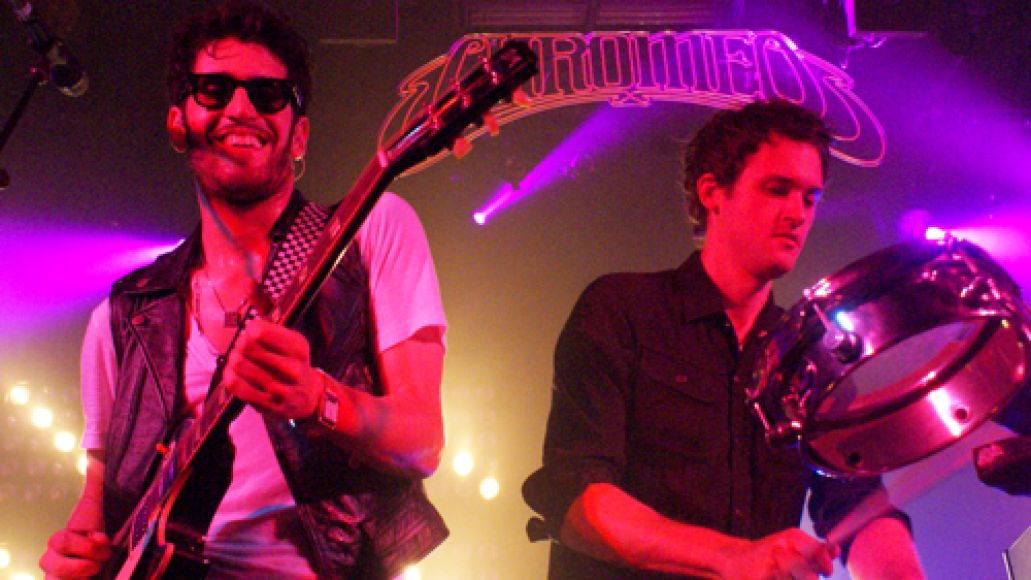 The show was capped off with a high energy rendition of the Eagles “I Can’t Tell you Why” and then everyone breathlessly limped away from the sweaty dance floor. Though people looked satisfied and worn out, there was one fan who was a bit irked at their short set (they only played for an hour and a half). I was more than happy with that running time considering I was numb from the waist down for the last half hour, but I guess it goes to show that not all fans can have their needs met – especially the neediest ones.

Second Encore
I Can’t Tell You Why
——

“I have no idea where this will lead us. But I have a definite feeling it will be a place both wonderful and strange.”
Better e-mail!

Chromeo makes us all "Needy Girl"s in Vancouver (8/11)