“This is for Brodie!” –Jay, just prior to punching the mall’s Easter Bunny

When I was 13-years-old, there was no band I liked more than Weezer. If you knew me at the time, this obsession made total sense… I was a huge dork who loved melodic indie rock and connected to anything remotely heartfelt. At the time, the band had made its triumphant return to the music scene, having just released Weezer (Green), which unleashed the crunchy, palm muted chords of “Hash Pipe” to own radio stations everywhere. Obsession aside, my love for Weezer led to one hell of a discovery, as its the only reason my best friend (and neighbor, but that’s irrelevant to you) brought up Kevin Smith at the bus stop one life-altering morning.

I had brought up the topic of Weezer, complaining that I wanted them to release more songs already. My friend, Michael Fredrick Cromwell I, had asked if I’d ever seen Mallrats. The thing is, I wasn’t necessarily confused. I recognized the title of the film, simply because every time I searched for Weezer on cdnow.com (How archaic, huh?), the movie’s soundtrack popped up. Cromwell I quickly informed me that the film featured a Weezer B-side called, “Susanne”. “It’s a good song,” he told me. As any curiously diligent teenagers would do, we came home from school that day, watched the movie, and I have pretty much never been the same since. I also have since then never looked at music on cdnow.com.

Mallrats came out in a very important time in film history, when the 90’s wave of independent films started crossing over into the mainstream. Almost over night, artists like Spike Lee, Kevin Smith, Richard Linklater, and Quentin Tarantino were all making these indie flicks that were breaking through to the popular world. As with any trend, they all came in different shapes and sizes. Some worked with A-list actors (Tarantino), a few made do with lesser knowns (e.g. Linklater), and others tried their luck absolute unknowns. Smith would fall into the last category. After selling his comic book collection for a hefty sum and maxing out credit card after credit card, Smith culled together enough talent (and gravitas) to release the 1994 comedy, Clerks. While not a commercial success, at least not then, the film became a critical smash, offering Smith a shot at a career in filmmaking. Then came Mallrats.

Although popular now, Mallrats hardly made a dent when it hit the silver screen. Well, that’s not true. It certainly made a mark on Smith’s resume, but in terms of popularity, it was a box office bomb. The sort of film that vanishes after opening weekend. In fact, Smith even says on the film’s DVD that when he went to see it opening night in his Jersey hometown, there was hardly anyone in the theater. Unlike Clerks, Mallrats received little to no acclaim, stumbling headfirst into the category of dirty comedies – the sort that parents everywhere scoffed at. Years later, however, Mallrats has become a comic staple, gracing many people’s DVD collections and becoming a ritually quotable movie in particular circles. For some, it’s also become a source of great music.

Looking back today, it’s hard to believe this was such a flop. First of all, how can you argue with a film that starts off with the line, “One time, my cousin Walter got a cat stuck in his ass…true story”? The then-slightly-unknown Jason Lee delivers a hilarious monologue about Walter, which became one of Smith’s trademarks (cousin Walter also broke his neck trying to suck his own penis, and jerked off in public on a plane). Jason Lee’s character, Brodie Bruce, delivers this story over a short, jazzy number from composer Ira Newborn that appears a few times throughout the film. Brodie completes his story, and the film launches into one of Smith’s most classic title credits. The credits display each character in the form of a comic book, as the track “Social” by the obscure Lookout! Records band Squirtgun plays. For being the only widely known song by Squirtgun (it’s the only one I ever found in my Napster days), it is actually a pretty decent tune, and was actually suggested to the film’s music supervisor by none other than Billie Joe Armstrong.

Then the film starts, and we meet the two protagonists, TS and Brodie. TS is played by the unlikeable Jeremy London, twin brother to the much better Jason London (Randall “Pink” Floyd of Dazed and Confused). TS has issues with his girlfriend going on a dating game show because it interferes with his blah blah blah… a typical boyfriend-girlfriend fight to kick off a movie. In the next (and better) scene, Brodie Bruce is passed out against a wall plastered with images of superheroes (again, one of Smith’s many fetishes). As he lies there with Shannon Doherty knocking on his skull, the then-unknown Silverchair has a song playing entitled “Stoned”. While the song’s intro is distorted, loud, and screams 1995, the song itself it a bit more mellow and fits the mood of Brodie’s spaced-out lifestyle, which involves Sega Genesis, comic books, and, naturally, malls. As the song ends, Doherty’s character Rene breaks up with Brodie. 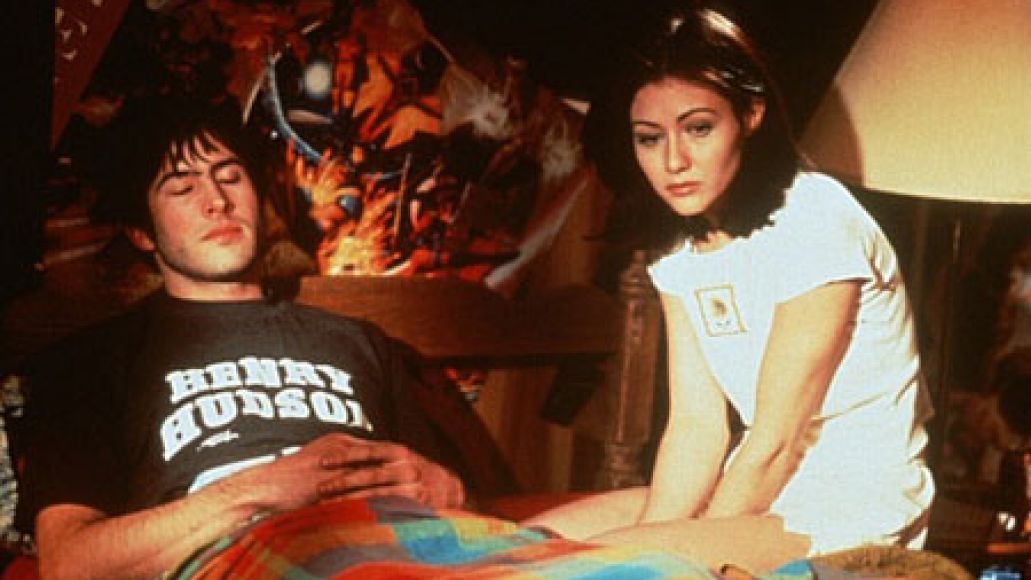 As she says her harsh and mean good-bye, she tosses a letter to Brodie as the cue for the song “Seventeen” by Sponge kicks in. You all might remember Sponge’s more widely known track, “Plowed”, which appeared in Empire Records but did not show up on the album. While Sponge has always been historically documented for the one-grunge-hit wonder, I am always brought back to “Seventeen” when I read their name. The song itself is a good alt-rock number, with its dirty-sounding chords, monotone “la la la” chorus, and strung-out lyricism. It is also at this point that TS and Brodie combine forces and decide on the one solution to “ease their simultaneous-double loss.” Brodie, the mallrat that he is, convinces TS to join him at the mall with one simple persuasion (which in all honesty would be enough to convince me), “Oh come on man! They got these new cookies at the cookie stand, you gotta try them, they’re awesome!”

As Brodie and TS embark for the mall post-haste, the Bush B-side “Bubbles” plays, which always reminded me of some old Alkaline Trio tracks. The song captures the excitement, the motion, and the arrival of Brodie and TS at the mall perfectly. A shortened version of the song’s intro is played as they drive, and it then skips the verse and goes into the chorus as Brodie shouts, “I love the smell of commerce in the morning.” Clerks favorites Jay and Silent Bob return to the screen just a moment later to another original track from Newborn, while we get to see one of Jay’s hilarious dance routines. 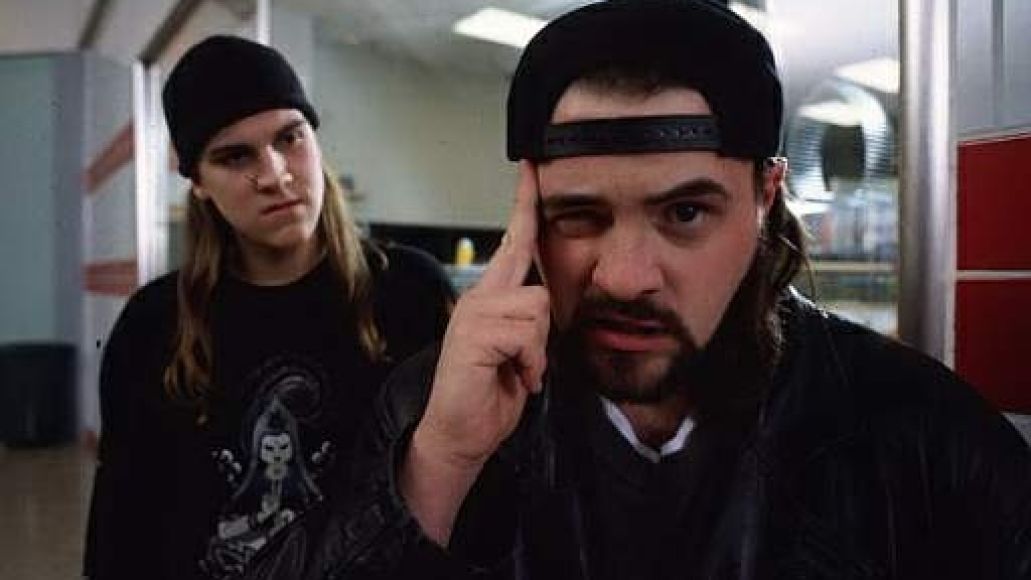 At this point, the film is in full swing. Jay and Silent Bob are on a mission from Brodie to disrupt the game show that would otherwise inevitably doom TS’s reunion with his girlfriend (Claire Forlani), while TS mopes and Brodie tries to win back Rene. Pretty standard, right? Of course, but Smith’s movies (his old ones at least) are hilarious, and thus we keep watching. Plus, there’s already a kickass soundtrack. Throughout the rest of the movie, each character finds themselves in amusing, almost slightly believable and hilarious circumstances. Brodie ends up having sex with Rene in an elevator as a cover of “Build Me Up Buttercup” plays by the Goops. We are introduced to the character Trisha Jones (a 15-year-old girl writing a research book on male orgasms), whilst Elastica’s song “Line Up” plays. This song would later be seen in Not Another Teen Movie. And even more notable is the appearance of “Boogie Shoes” by KC and the Sunshine Band when TS and Brodie hide from police at a flea market. This one’s not on the CD, but it’s a song my best friend once stated “appears in every movie…ever.”

The film’s climax is pretty ridiculous, and for me to try and explain it to the average reader would be impossible unless you knew all the bizarre events that lead up to it. Basically, in terms of the soundtrack, this is what you need to know. A hilarious montage of Jay getting two complete dorks stoned takes place set to “Smoke Two Joints” by none other than Sublime. Mind you, this was before Sublime were the mega-icons they later became, so the inclusion of this song is kind of interesting. We watch Jay’s stoned prey as they hopelessly lie on the floor and feed themselves Cheetos. When each male cast member is confessing their love to the female leads upon the end of the film, the song “Broken” by the band Belly plays. I had never heard Belly prior to this film, but the song is well-fitting for the mood of the scene. It brings forth a sense of happiness, allowing you to feel what the characters are feeling; a happy fucking ending.

Before “Broken” even has a chance to fade away, the aforementioned “Susanne” cues up to kick off the “Where are they now…” sequence. The inclusion of “Susanne” always made me feel like it wrapped up the film nicely. It’s such a quality and heart-warming Weezer song, and even after I saw this film for the first time, I immediately went back home, turned on my computer and listened to it about 100 more times. Even the final shot of the film is perfect with that song, as Jay, Silent Bob and a monkey by the name of Susanne walk off into the sunset, while the bottom of the screen reads, “As for Jay and Silent Bob, that’s another story,” you feel a sense of joy knowing there will be four other movies with them and an animated series down the road. To close things out, though, the title track for the film plays by Wax, a band most notoriously known for a music video with a guy running on fire. Of course, it couldn’t be a ’90s movie without an obscure, alt-rock closer that nobody would ever remember.

All in all, Mallrats is still my favorite Kevin Smith film, which is sort of funny given the pain and tremor it caused the director. But really, it’s got everything. A hilarious cast (Jason Lee post-Blind Video Days is classic), great quotes from all of its characters (“Holy shit! Mother fucking Yoda and shit!”), and a kickass soundtrack, complete with 90’s odds and ends, make for one favorable cinematic ride. For me, it’s really about the music. But Smith has always done a top notch job putting music to his films – well, at least his first three. Even with Clerks‘ minimal budget, he was able to pull it off with great songs from the likes of Soul Asylum, Alice in Chains, and Bad Religion. With Mallrats, I felt his rhythm for musical inclusions improved. In the years that followed, Smith made some great films and some bad ones, but Mallrats will always hold a special place in my library, right next to my old Weezer posters, my Toy Machine shirt, and the start of my appreciation for underdog filmmakers.