Tattooed girls in sweat-drenched Deftones’ tank tops. Jacked up muscle men with bruised knuckles and ripped khaki shorts. Self-proclaimed “freaks” with enough piercings to set off a metal detector. These were the types of people who were lucky enough to catch the pulsing first show of the joint Deftones and Baroness tour at The Knitting Factory in Spokane, Washington. I was included among the lucky – I made the pilgrimage to the eastern part of the state in order to see the Deftones after a 10-year hiatus (was a huge fan as a teenager) and to check out Baroness, a band I regrettably ended up missing at Coachella (you can blame the ticket scanning fiasco for that one).

The Deftones, of course, are setting off on their Blackdiamondskye tour in the fall, playing alongside Alice in Chains and Mastodon. But even though the band could rock with an arena setting, I couldn’t pass up the chance to see them in a small, intimate setting. The Knitting Factory, with its tiered floor and New Orleans-style balconies, has a 1500 person capacity and was packed to the brim with hardcore fans who wanted to experience the band in the most in-your-face way possible since their latest album, Diamond Eyes, was released. The atmosphere was loud, drunk and amped – with a current of uneasy tension that was constantly buzzing throughout the venue. A lot of people were there to fight, sure, or just get messy, but almost everyone was charged by the fact that the Deftones were playing. Tonight. In their town.

Not every person was there for the Deftones, though. The Georgia-based prog/metal/loud Baroness drew in quite a few people as well, which should come as no surprise since both their Red and Blue albums have received ridiculous amounts of praise from fans and critics alike. And even if half the audience weren’t fans of Baroness to start with, they probably were when they left – this I gathered from the amount of people stumbling out to the merch table and asking “Wow, who were those guys?” 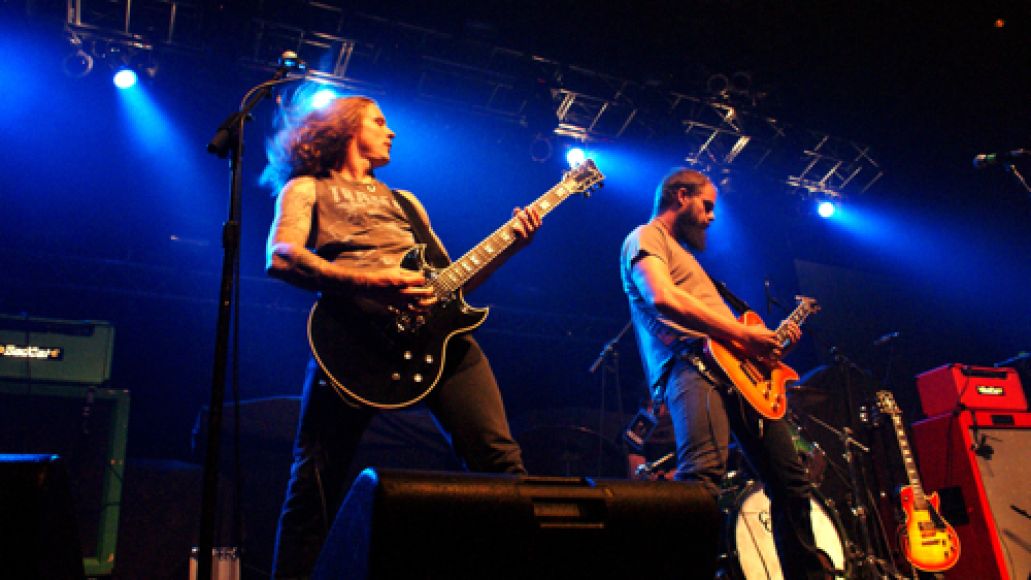 So… who were those guys?

Those were some talented musicians who put on a hell of a brazen show. While their sound may be a lot more intricate and progressive than the Deftones, and singer John Baizley’s bellowing voice is the opposite of Chino Moreno’s, they were definitely a smart pick to get the audience warmed up. Though the crowd surfing was minimal at this point, people were enthused and quite a few were flinging themselves around and singing along to the charging, powerhouse song “A Horse Called Golgotha.” 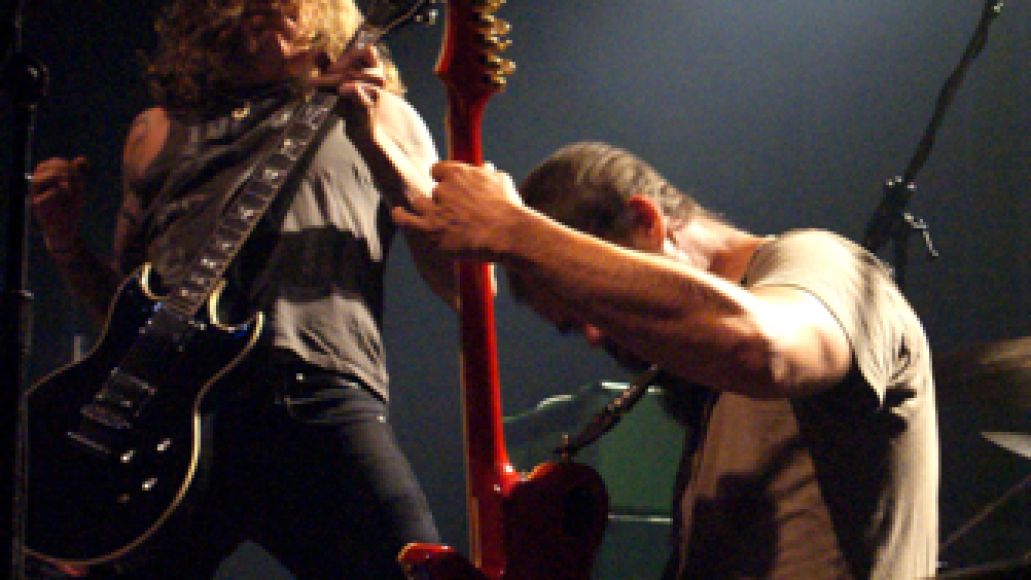 The band themselves were jaw-dropping to watch. Drummer Allen Bickle looked like a joyful madman, banging away on the drums with a huge smile on his face, bassist Summer Welch looked like the quintessential metal god complete with sleeveless tee and unstoppably long locks, while guitarists Pete Adams and Baizley spun off those most detailed riffs while goading the crowd and each other. Having listened to the layered complexities in the songs of the Blue album, I wondered how well that would translate in a live performance. Not to worry, these boys have it down.

With the crowd pumped from Baroness and a relatively quick changeover, the Deftones took the stage to a huge applause. These fans were raring to go, and the crowd surfing started immediately with the opening songs “Hexagram” and “Needles and Pins.” Personally, I’m not sure if those two songs were the best choices to start off with considering all the songs in their repertoire, but that was soon forgotten when “Rocket Skates” came on.  The intensity level was kicked up several notches and the amount of bodies flopping down over the barrier multiplied. Everyone, including me, was screaming “Guns! Razors! Knives!” at the top of our lungs and thrashing around to this bone-jarring, driving force of a song (easily one of the best on Diamond Eyes).

Actually, people were screaming along with Moreno for the entirety of the concert. Like I said, these were the hardcore fans that knew every word, even from the overlooked Adrenaline. Of course, when it comes to screaming, no one can compete with Moreno. His voice was dead-on, magically inhaling those screams deep inside and then letting loose a beautiful, melodic flurry. Watching Moreno do this dance of inhuman frequency and soothing ballads is part of what makes a Deftones show so entertaining, layers of bi-polar sounds on a background of grit and grinding. Watching Moreno dance in general is also pretty entertaining since he likes to stand at the front of the stage and start grooving to the beat. He could use a few dance lessons but it’s fun to watch the music move him. 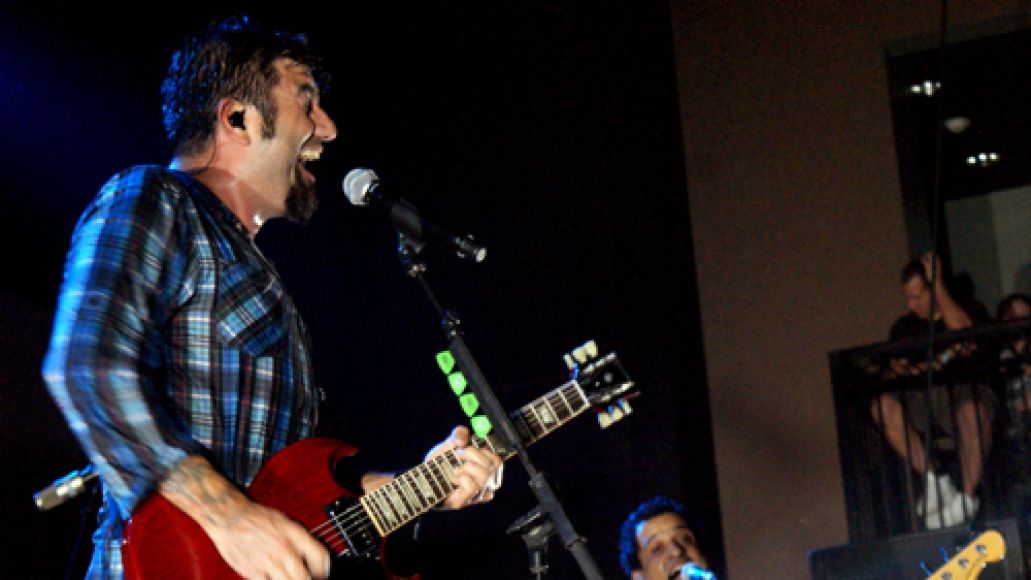 When he wasn’t getting down, draining his lungs out, leaping about the stage or physically climbing on top of the crowd, he would pick up a guitar and provide an extra edge of sound to songs like the haunting “Digital Bath.” That, and another White Pony track, “Change (In the House of Flies)”, were bonafide crowd-pleasers and created a surge of unity in the audience. Even the surfing during the latter slowed down as everyone sang along with a shared sense of emotion. It was wonderfully intense.

But what am I saying? The whole show was intense! Moreno’s interaction and connection with the audience (he often makes eye contact and sings at fans instead of over them) kept every concert goer’s pulse at dangerous levels. Drummer Abe Cunningham, turntablist/keyboardist Frank Delgado, guitarist Stephen Carpenter and bassist Sergio Vega were perfect foils to Moreno’s energetic persona and proved to be the barreling backbone of the whole operation. 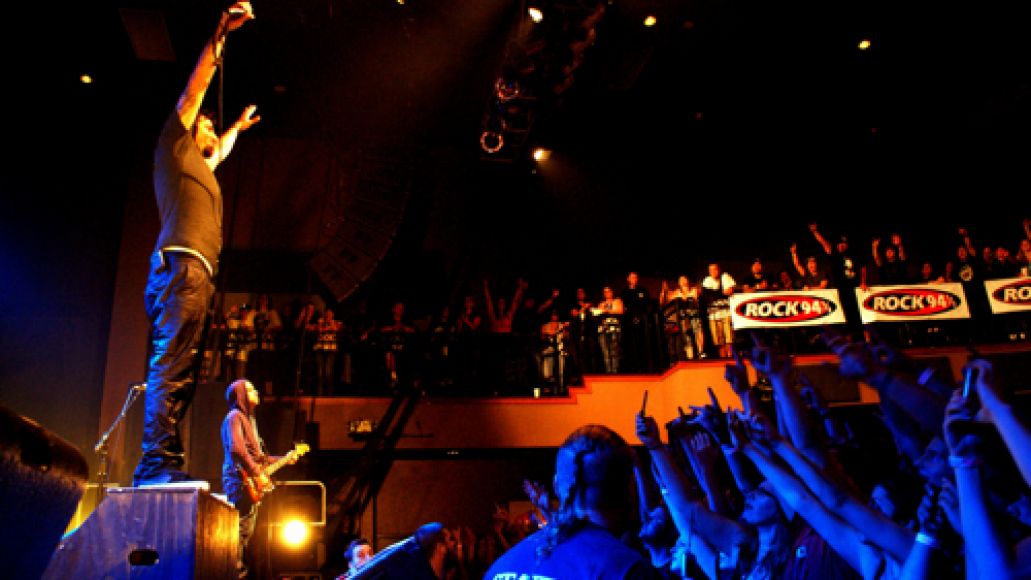 If I had any complaints about the show, it would have to be the lack of songs played off of Saturday Night Wrist. They only played “Hole in the Earth” (epic, by the way) from that album, which is a shame because there is some really diverse and versatile songwriting there. But you can probably tell I’m reaching, complaint-wise.

The show was everything I expected and then some. It was unusual and mesmerizing (Baroness), it was abrasive and edgy (the crowd), it was humbling and hopeful (Vega taking over for Chi Cheng), it was it was comfortable with old favorites (“7 Words” as the batshit crazy encore) and exciting with new favorites (“Risk” is a new classic).  In short, it kicked my ass and I can’t wait for the Blackdiamondskye tour so I can have it kicked all over again.