Stone Temple Pilots, one of the few early ’90s alt-rock bands that has managed to last (okay, we’re using a broad definition of “last”) through the early ’10s with a complete lineup, is also one of an even smaller group to reunite and do more than just tour. While STP is doing plenty of that – back on the road until October – the band also released its eponymous sixth album this past May, which peaked at #2 on the Billboard 200.

It’s also a band trying to find its place amongst the endless list of acts from that dirty decade reappearing for a quick buck. “I don’t look at this as a resurgence,” guitarist Dean DeLeo tells us, taking a break from rehearsals to speak with Consequence of Sound. His attitude regarding the recent Soundgarden reunion was summed up in the simple words: “Wow, we get those guys back?”

Perhaps the reason DeLeo doesn’t think of the recent return of so many ’90s bands as a resurgence is because his own band has some continuity going for it. STP isn’t one of those collectives (you know the ones) that were more or less done and decided to plug it back in after running low on cash. DeLeo says the reunion, which to him isn’t really a reunion, is unrelated to the demises of Velvet Revolver and Army of Anyone, both of which consisted of major STP pieces. “It was always in the cards,” he says.

Well, it’s easy to say that now, one might contend, but he’s put his money where his mouth is; while bands like Soundgarden, Faith No More, and Rage Against the Machine haven’t dropped so much as a hint of new material, STP has released an album that somehow didn’t completely suck. That might have something to do with the history of the material; DeLeo points out that “Most of the songs that appear on this album have been written for a long, long time” — the oldest being the postivity-for-postivity’s-sake anthem “Dare if You Dare” (1996), and an exception being “Huckleberry Crumble”, which DeLeo’s brother Robert wrote “halfway into the [recording] session.” Some of the new album was even tried out with Army of Anyone, which the DeLeo brothers were a part of before rejoining STP. DeLeo played frontman Richard Patrick “Hickory Dichotomy”, he said, and Patrick’s response was “What the fuck is that?”

The right frontman can do wonderful things for you, and while Scott Weiland doesn’t have the cleanest reputation, DeLeo has nothing bad to say about him. “Every time I write something, I fantasize about what he’ll do with it,” DeLeo says, adding he was “fulfilled and taken aback by what Scott does to [his] material.” If you’re wondering why he has to fantasize, it’s because the new album was recorded in three separate home studios, each member sending his part to the other members to work with. 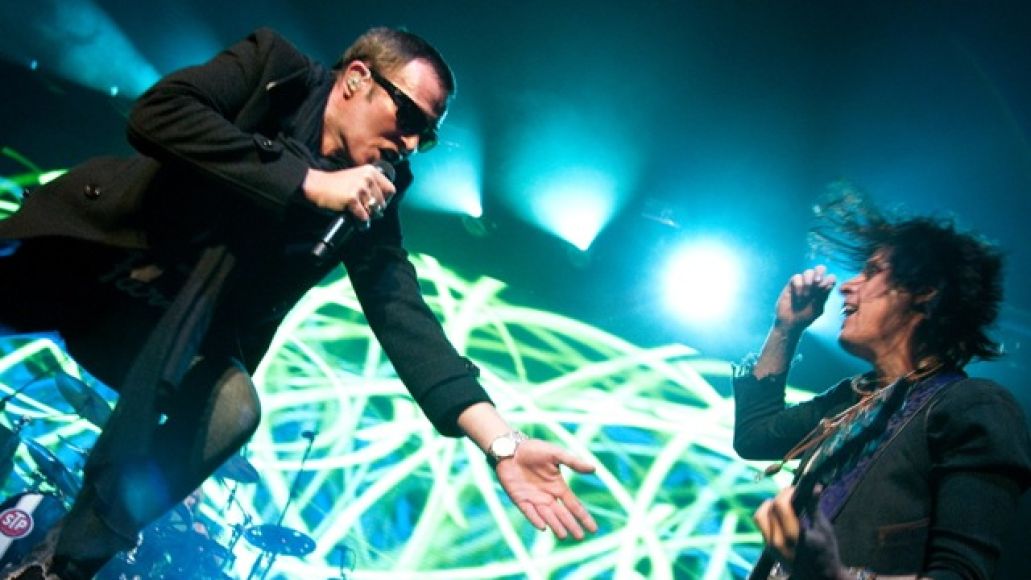 DeLeo is refreshingly principled about putting out new stuff, claiming his goal for Stone Temple Pilots was to “make a contribution to music.” He continues, “I don’t wanna take from anyone or anything… I wanna add.” And according to DeLeo, the rest of the band shares this policy: “If we felt we were stagnant in any way,” he says, “[the band] wouldn’t have released it.”

The band’s choice to self-produce the album, when they could have had any producer they wanted, is a good indication they are serious about this policy. “Our label [Atlantic Records] refused to let us produce it,” De Leo says, adding Atlantic told STP, “‘We want a big-name producer.’ You know what we told them? Fuck off.” DeLeo stands by the band’s choice, calling the self-titled album STP’s “finest-sounding record.” And once the band played the new album for Atlantic, he says, the label caved in on its demands.

STP has had a rocky relationship with Atlantic in the past; the label sued the band in 2008 for attempting to escape their contract prematurely. DeLeo speaks candidly of this relationship. “It just seemed funny that every label but our own contacted us to write songs for other artists,” he says. “Our own fucking label didn’t even know what they had in their back pocket for the last decade.” Furthermore, according to DeLeo, the band won’t be working with Atlantic much longer. “Their loss. They have us for one more record,” he says. “I think it’s only because we managed to sell a lot of records that we’ve had a pretty good relationship with them.”

After likening major labels in general to a “bank,” DeLeo weighs in on life after Atlantic. “I think we should just make records and sell them on the STP website.”

But for now, DeLeo is devoting energy to putting on a quality show. He reveals that, while the band still has an obligation to play the hits, STP will be bringing something new to the table for this tour. The band’s plan is to “grab a little bit from each record,” and throw in some “stuff we’ve never played live,” including the aforementioned “Dare if You Dare” and “Cinnamon”, another track off the new album. STP will also be breaking out its 1995 Led Zeppelin cover “Dancing Days”, as well as a “semi-electric, semi-acoustic” version of Purple track “Pretty Penny”.

In addition to bringing Black Rebel Motorcycle Club on tour, STP will be joined by hype magnet Cage the Elephant, prog-pop band Fang Island, and indie garage rock quartet TAB the Band, all of which DeLeo is excited about playing with.

Just to sweeten the pot a little, the band has teamed up with JVC for a contest called “The Perfect VIP Experience”, offering fans a chance to win two VIP tickets, a video camera, and a meet and greet with a band member after each show.

Tickets are on sale now, and you can get them on Ticketmaster. Full tour dates are below.