Daimian Holiday Scott and Andrew Thomas of San Francisco’s Il Gato are all about the experience. Whether it’s something you experience live, something you experience personally, or something you experience through art, these guys are all for it. When I hung out with them in an obscure bar with even more obscure types of beer, we discussed their music, their band, and their mission among many things, but what came up a lot was experiencing things. Some moments in life we seemed to share similar experiences with were both big influences on our choices as those who seek creative endeavors. We all seemed to really dig Neutral Milk Hotel’s In the Aeroplane Over the Sea, as it is a phenomenal and inspirational record. And we all were totally down with Paul Thomas Anderson’s Magnolia, a movie about a bunch of people who tend to overreact about their personal issues who live in the San Fernando Valley. We all talked about experiences through culture, and the music of Il Gato is indeed a cultural experience.

The name Il Gato came to be from some sort of twisted social experiment that Gainesville-born singer/songwriter/guitarist Daimian Holiday Scott thought would be a good joke. He figured if the band punctuated the name correctly and spelled it in such a way, people would say their name in a distinguished voice (he demonstrated for me in such a way that reminded me of a Spanish conquistador, even though I have never personally met one). Then he figured he would talk to the audience in either Italian or Spanish the entire time, while still singing in English, only to eventually reveal he was an American all along. His trickery and twisted sense of humor, though, has gotten him and three others to unite forces and create some new, interesting music.

It’s not so weird that we talked about In the Aeroplane Over the Sea so much, because the band takes notes right from Jeff Mangum’s book. “We like the idea that it’s just sort of this epic work trying to capture a source of humanity, trying to strive beyond music, and help people understand themselves,” Scott tells me. “But I like Kurt Vonnegut too,” he adds. “Making a joke is far more important than understanding things.” At the same time, though, the band keeps it totally operatic, much like Magnolia’s flowing style of storytelling. All this plays off on their new album, All These Slippery Things, a stellar record that my roommate thought had “very trippy artwork.” The instrumentation is fantastic, featuring a number of horns, strings, upright bass, mandolins, and a plethora of other instruments. “We used to be a collective,” they explain to me. “But everybody couldn’t commit; they were teachers and lawyers.”

Thomas explains to me the songwriting process of how four dudes cram in so many instruments. “Daimian does a rough draft of the lyrics, progression, and feel. But then there’s Matt who arranges the horns, and I just add the funk to it and whatnot.”  Apparently though, Scott had a number of songs written prior to the making of this album, for he recorded the first EP by himself, in his apartment, and quit his job to do so in true rock fashion. But his melodies, combined with Thomas and Johnny Major’s rhythmic work, have turned into something that truly works.

All These Slippery Things starts off with “The First Waltz”, a dark and old style piece that leads into “All These Birds in My Hair”, a horn-filled, mystical tune that sounds like an elegant San Francisco afternoon, filled with wine, cheese, and all the other things that the Bay has to offer. “The Snapping Song” sounds like folk music with a bump of cocaine up its nose, working off of a fierce acoustic guitar, some violent harmonicas, and a string section that sounds like it might attack you. By far my most favorite track would be “On Feathers & Arrows (On Burnt Pine)”, which sounds like Jeff Mangum hanging out with Fleet Foxes. If the song “In the Lightning it is Written” had no rhythm section, it would be a James Mercer B-side, but the percussion arrangements combined with instrumentation of the song makes it fantastic, it makes it unique, it makes it… (Spanish voice) Il Gato. 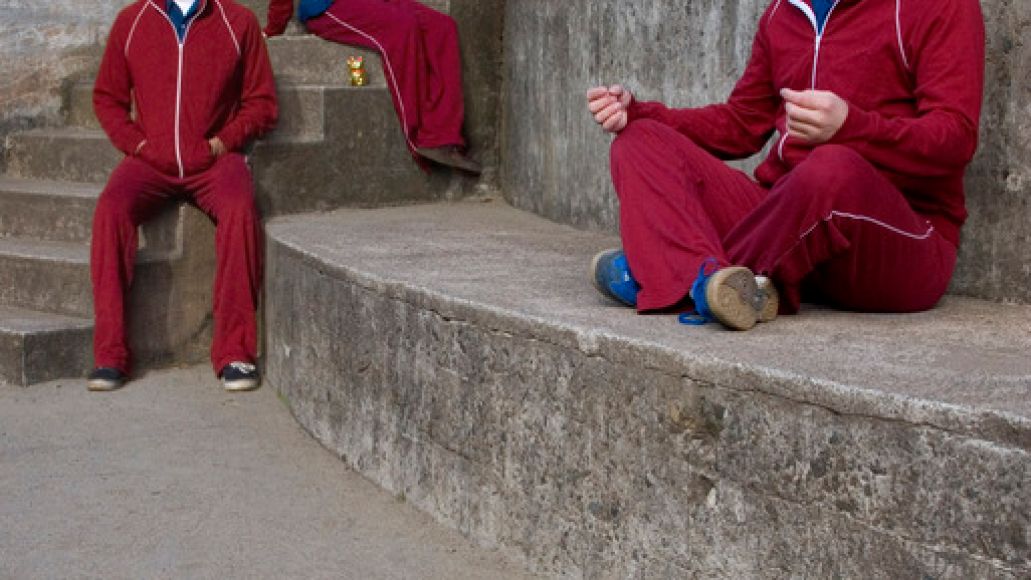 For an album recorded at a studio with the word “tiny” in the name and then overdubbed in an Oakland apartment building, I must say the finished product is quite amazing (it even contains a cry from a practicing opera singer in the background, who is the neighbor of Thomas). But like the Arcade Fire with their live rendition of “Sprawl II”, Il Gato is still trying to master their live show so they can go on the road and promote their work in other demographics.

“We have an album with 12 instruments played by 4 people,” Scott explains to me. “I want our live show to be an experience.”

Thomas agrees with him: “Yeah, I mean, I like it when bands make good studio stuff, but it’s even better when they go all out live.”

Il Gato seems to generally be going all out – in the studio and in the realm of life, too. From a band that draws inspiration from the far reaching sounds of Neutral Milk Hotel, Tortoise (our next discussion involves a digression how “TNT” is the most genius seven minutes of music ever), Latin jazz, Boyz II Men, and Pearl Jam, they clearly have been able to latch on to different types of music as they have been developing. Music is changing constantly, and you have to jump on waves of sound while they still seem fresh, combine them in a blender and kick out the jams. Il Gato is already doing a fantastic job of this. Towards the end of our conversation, Scott tells me, “The only constant thing in life is change,” and if this band can keep changing it up, then sooner or later everyone will know the name of… (Spanish voice) Il Gato.