The marquee was bright; the walls were edged in gold; the tickets said “Broadway in Chicago”, for heavens’ sake. When Rufus Wainwright decides to put on a show, you know you’re in for something magical, but his current tour in support of All Days Are Nights: Songs for Lulu takes magical to a whole new level. “Mesmerizing” is the word most often bandied about by the crowd after the first half of his set—but wait! We’re getting ahead of ourselves, and no part of the show, which took place this past Friday at Chicago’s Bank of America Theater, could conscionably be skipped over.

Opening for Mr. Wainwright would be no easy feat for any musician, which may explain why Wainwright chose his little sister Martha for the job. Martha is best known as a folk singer, and I wondered how her music would jive with the audience, who came in want of high pageantry. But if you’ve grown up with someone, of course, it would be hard to be intimidated by him. Martha filled her role capably, comfortably, and dare I say, wonderfully. Her gorgeous, buttery alto poured from her throat, the folk-flavored female compliment to Rufus’ tenor. Like her brother, Martha slides effortlessly up and down the scales, one moment shouting, now quiet; one moment throaty but up to falsetto in an instant. She sings a fearless, bottomless brand of folk comparable to her brother’s music only in its limitlessness. One wishes to be a fly on the wall in their childhood home.

The crowd clearly adored Martha, whooping almost involuntarily throughout her set. Crowd favorites included opener “Bleeding All Over You”, which showcases Martha’s beautiful capability for heartbreak; “This Life”, during which Martha often closed her eyes and looked to the ceiling as if to invoke the gods of music, to a quite moving effect; and “Soudain Une Vallee”, for which her husband joined her on piano, from her recent record of Edith Piaf songs, Sans Fusils, Ni Souliers, A Paris. Martha’s Piaf is throaty, raw, nuanced—in a word, lovely. The crowd was so taken with this latter piece—and with an a cappella last song performed at the edge of the stage, hands wrung—that her Piaf record sold out at the show during intermission. Martha took the great, cavernous theater and made it feel like a small coffeehouse joint, like you were sitting five feet away, like she was the coolest girl you knew from college. Never have I had such a strong desire to sit over whiskeys with a musician. 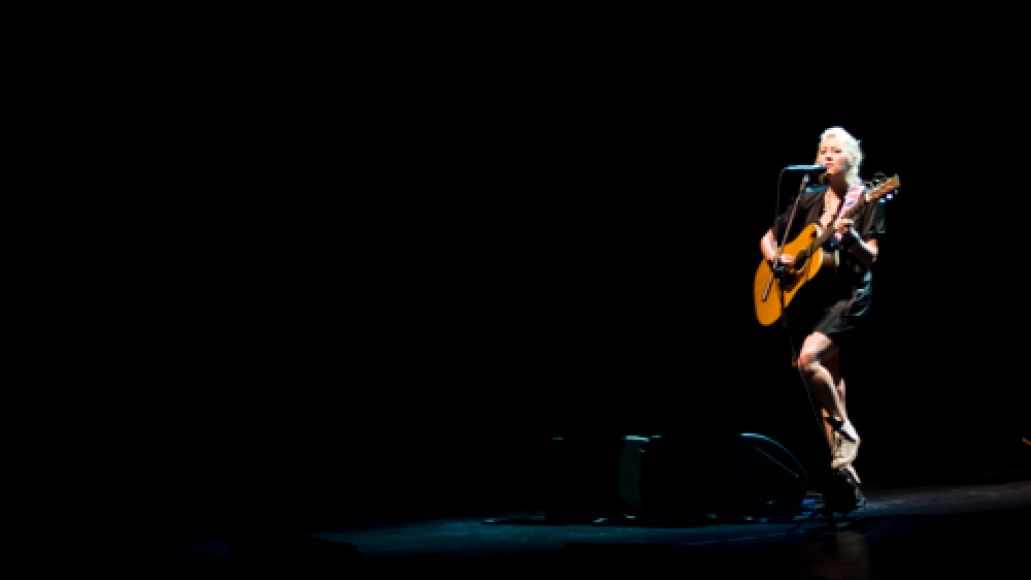 After a brief intermission, the crowd was reminded of the particulars of Rufus’ set: He would play Lulu start to finish, and there was to be no clapping or interruptions of any kind during this song cycle portion of the program. The lights dimmed, and Rufus appeared stage left in his now-famous costume: the feathers, the jewels, the 15-foot train, all in black. He walked somberly, slowly to the piano and took his seat under a single spotlight. He paused, and then launched into the meandering, river-like piano intro of “Who Are You New York”. The somber black-and-white setting, lit from behind by Douglas Gordon’s art film of a heavily made-up eye opening and closing, threw both the high and low emotional points of the record into sharp relief. 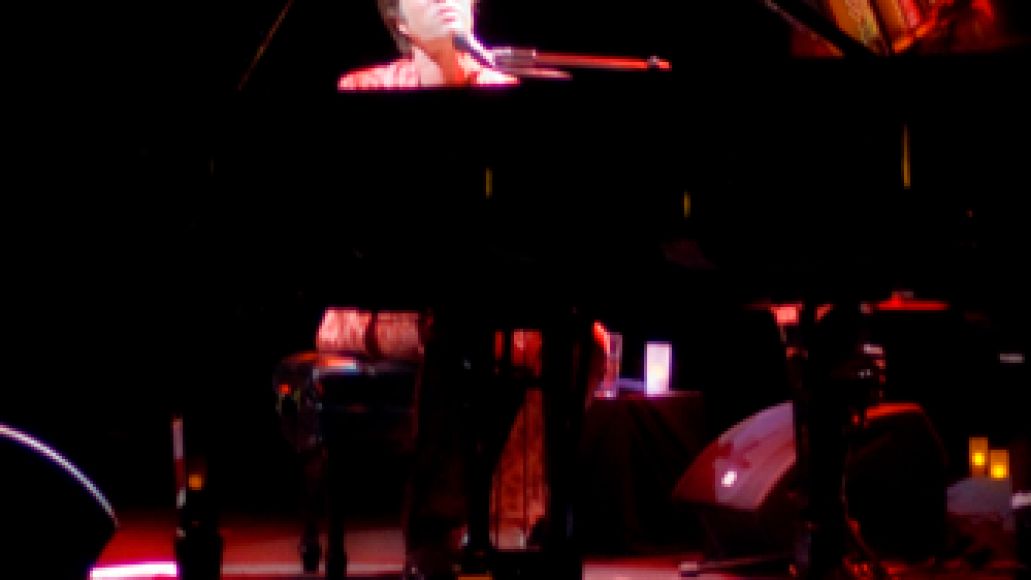 A particular highlight of the set was Rufus’ stark love song to his sister, “Martha”, dealing with their beloved mother’s recent fatal illness. The somber setting and the bareness of his voice all alone on the wide-open stage made the song heartbreakingly plaintive; I cannot have been the only audience member moved to tears. Though the crowd forgot their instructions and clapped at the beginning of the set (possibly an after-effect of their boundless enthusiasm for Martha), Rufus took only a silent sip of water and kept playing; by the third song, the silence between pieces was an actual absence of sound. At one point, car horns could be heard outside the theater. The piano parts on the record are quite challenging at times, and Rufus leaned into the difficult ones, giving the audience a real sense of his effort. The Shakespearean sonnets took on a new drama in that setting, as did “What Would I Ever Do With A Rose”, with its slightly insidious piano part. I never before noticed the darkness of that piece until I heard it live under the spotlight. “Zebulon”, the closer of this set, was given new depth as well; one was struck by the degree to which Rufus laid his soul bare on that stage. This was high drama, living opera– performance art at its finest– and conceiving of and performing it surely took some moxie. Bravo, Mr. Wainwright, bravo.

After another brief intermission (cue the audience to say “mesmerizing”), Rufus took the stage again, this time dressed as himself, to a standing ovation. He played a mix of popular songs from his previous records, with Martha joining him on stage for a few. Highlights of this set (copious applause permitted) included “This Love Affair”, “Memphis Skyline”, and particular crowd favorite “The Art Teacher”, all from Want Two; and “Nuits de Miami” and “Complainte de la Butte”, both sung with Martha and in French (“since we’re in the Paris-Berlin-Moscow of the Midwest!” Rufus proclaimed to adoring Chicagoans). And yes—finally, for this long-time fan– he played a heartrending version of “Hallelujah”.

The crowd brought him back out for an encore, which ended with his late mother’s song for his father, a beautiful rendition of her “Walking Song”. The show lasted three hours, but we could have stayed all night. A mix of operatic drama and coffeehouse warmth, costume and charisma, light and dark, soft and loud, male and female, stark sadness and bright optimism: The Wainwrights surely know how to put on a show for the ages.

Rufus Wainwright first setlist (song cycle):
Who Are You New York
Sad With What I Have
Martha
Give Me What I Want and Give It to Me Now!
True Loves
Sonnet 43
Sonnet 20
Sonnet 10
The Dream
What Would I Ever Do with a Rose?
Les feux d’artifice t’appellent
Zebulon