AC/DC. Pink Floyd. Faith No More. The Vincent Black Shadow. All of these bands have had to come up with the formidable task of replacing their lead singer while keeping the music going. And while Vancouver band The Vincent Black Shadow (VBS) is just a small player on the rock and roll scene, it doesn’t make the undertaking any less difficult.

Founded in 2003 by singer Cassandra Ford and the Kirkham brothers (bassist Chris, guitarist Rob and drummer Tony) from the sleepy suburb of Tsawwassen, BC, the VSB gained attention with their 2006 debut album Fears in the Water. Soon they were touring with the likes of Snow Patrol and Joan Jett and were part of the Vans Warped Tour. But with Ford leaving the band to pursue her career in the visual arts (she has designed a lot of the band’s artwork) in early 2010, she left some pretty big heels to fill.

Enter Nikki Hurst, the VSB’s original keyboard player and a singer in her own right. She was quickly recruited to replace Ford – but as it happens with any bands with a following, and especially those with a very unique-sounding singer, it was not going to be an easy feat.

The re-vamped VBS made their debut last Friday at the sleazy Bourbon Nightclub to an accepting and enthusiastic crowd. Sure, most of the concert goers were friends and family which made things easier but there was still a lot of pressure on the band and especially on Hurst. 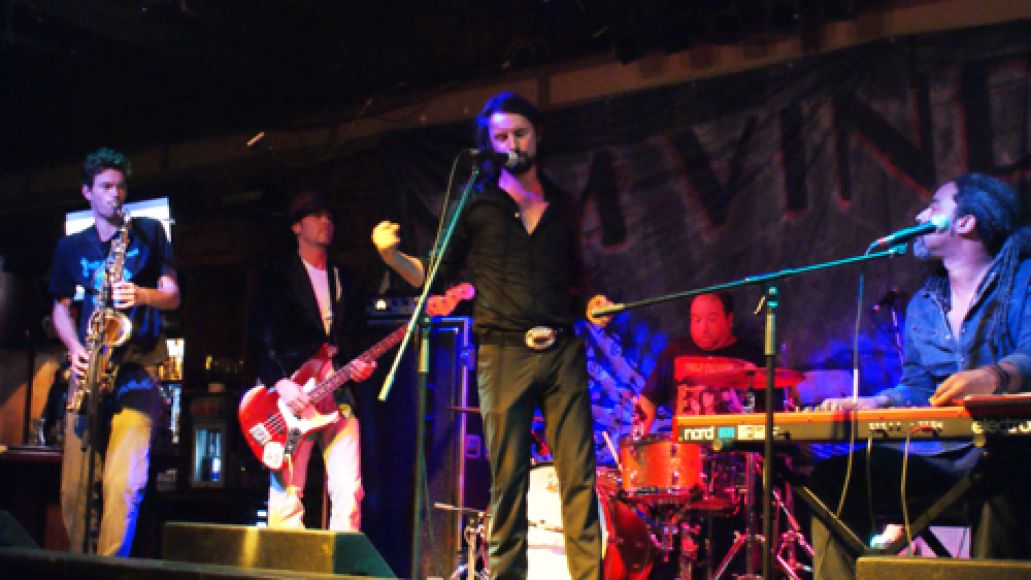 Before Hurst got her chance to prove herself though, there were the opening acts Joseph Blood and Nim Vind.

I’d never seen Joseph Blood and his band before but I was presently surprised. It’s not often you find a bluegrass-style rock band in Vancouver, especially not one as photogenic as this one. Every member of the band, from the enigmatic lead singer to the dreadlocked keyboardist, filled the stage with authenticity and really helped nail the bluesy atmosphere. As did the song “Whiskey Messiah” which had Blood pretending to be a preacher and healing audience members. Talk about interaction!

The next band up was presented with a heavy dose of irony; Nim Vind is Chris Kirham’s solo project, featuring… well, his brothers Rob and Tony. It’s pretty much The VBS but without a female singer and some instrument switching. But instead of sounding like pop punk for vampires, Nim Vind leans more towards a fast-paced emo Elvis. You following? Well, the crowd was, bobbing their heads around to the catchy tunes and driving beat. 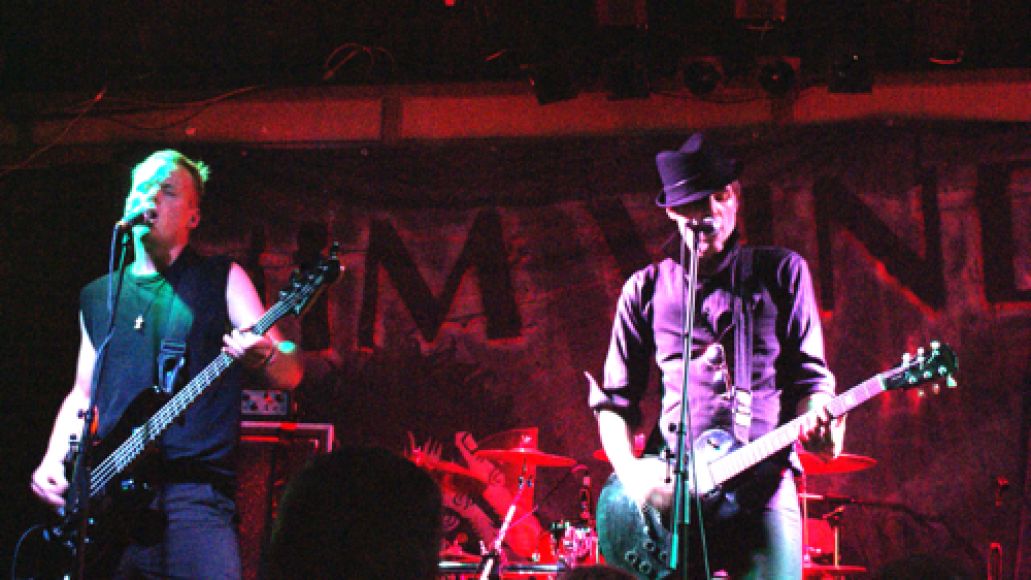 Time now for The Vincent Black Shadow. The brothers quickly changed clothes, they brought out their keyboardist Miranda Liu and Hurst stepped on to the stage, looking understandably nervous but stunning in her all-white outfit.

I’d like to say that the show got off without a hitch, but unfortunately there were microphone fuck-ups during the first few songs which left Hurst without vocals half the time. But instead of letting that hamper her performance, Hurst powered through and by the time the sound was fixed, she was off and running. Maybe the situation gave her a chance to gear up or perhaps it’s because she faced a worst-case scenario and got through it. Either way she only got more confident as the set went on and by the time she hit “Fears in the Water” (which is arguably the band’s most well-known song), it was clear that Hurst was making these songs all her own and rocking the joint. 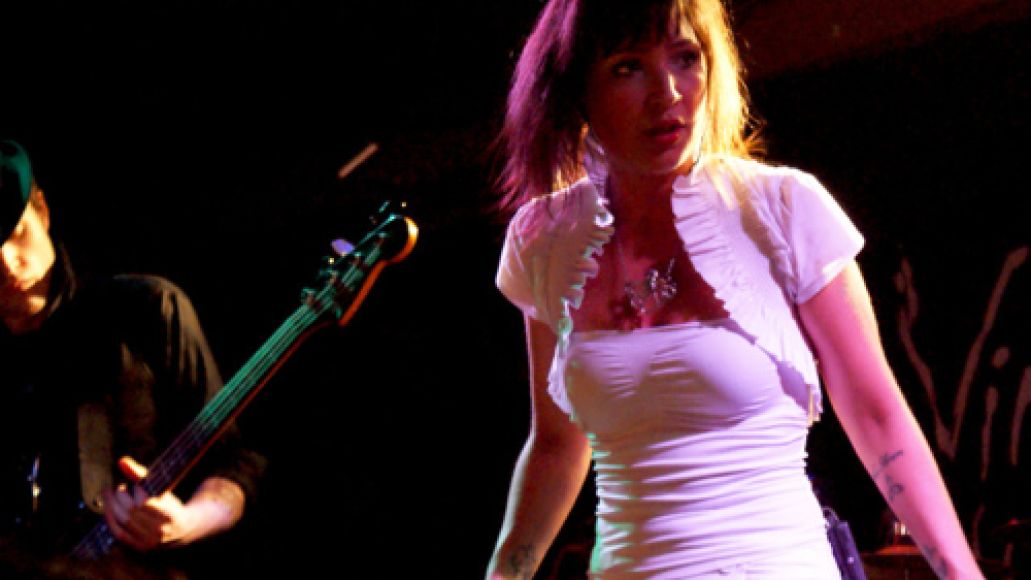 The band was getting more and more comfortable up there as well, with Rob Kirkham acting like the ultimate show boater, playing up the boisterous crowd and keeping Hurst on her feet. Chris held down the rhythm section with ease and Tony pounded the hell of out those drums. Special props to Tony for muscling through two full sets  and capping it off with a rousing drum solo which really got the place moving.

Speaking of the audience, The Vincent Black Shadow one-upped Joseph Blood in terms of crowd interaction: during the encore,”Surgery”, the band invited up concert-goers to dance with them on stage. The end result was chaos, extremely entertaining and a hell of a lot of fun. 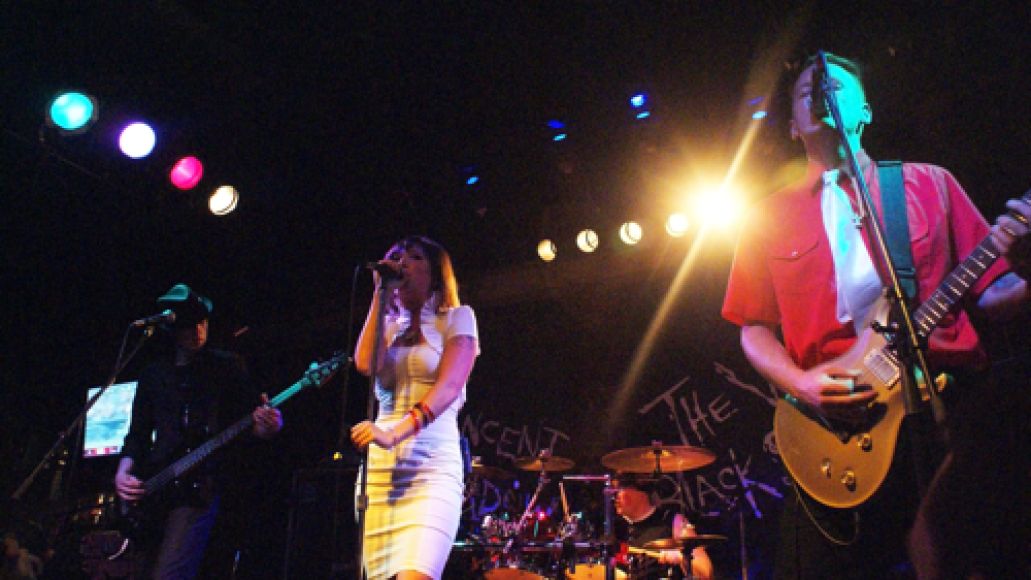 If there were any doubts about the re-formed VBS, they were all erased after that performance. Hurst established herself as a strong singer with an endearing stage presence, which meshed well with the vibe of the band. Like I said, it’s hard for a band to establish themselves, let alone establish themselves and then change singers, but The Vincent Black Shadow managed to pull it off.