Lots of you probably know where you like to get your music. For a lot of you, this location has been a BitTorrent client on your computer for the past few years. For some, it may be iTunes. For others still, it may be the local BestBuy or Target. However, for me, and for a scarce few of you, the place where you get your music has been, is, and remains your local mom-n-pop record store. Since I moved to Nashville and discovered the wonders of vinyl, none other than Grimey’s New & Preloved Music has become my one stop shop for all things related to auditory enjoyment.

Grimey’s is everything you could (or would) ever want in your home-style record shop. The staff is friendly, and always open to chat about various artists, upcoming shows, or almost anything else, really. Grimey’s is always updating their Facebook and Twitter with the upcoming and latest releases, as well as their almost daily in-store performances.

They’ve hosted everyone from The Black Keys, to Rogue Wave, to Star Death & White Dwarfs, to, yes, even Metallica (that was actually The Basement, a 150 capacity hole-in-the-wall venue, seated in… THE BASEMENT, that is below Grimey’s). They always have the best goings-on for Record Store Day; two years ago I had the pleasure of catching a free performance by The Avett Brothers in the back lot of Grimey’s, in celebration of the cult holiday. 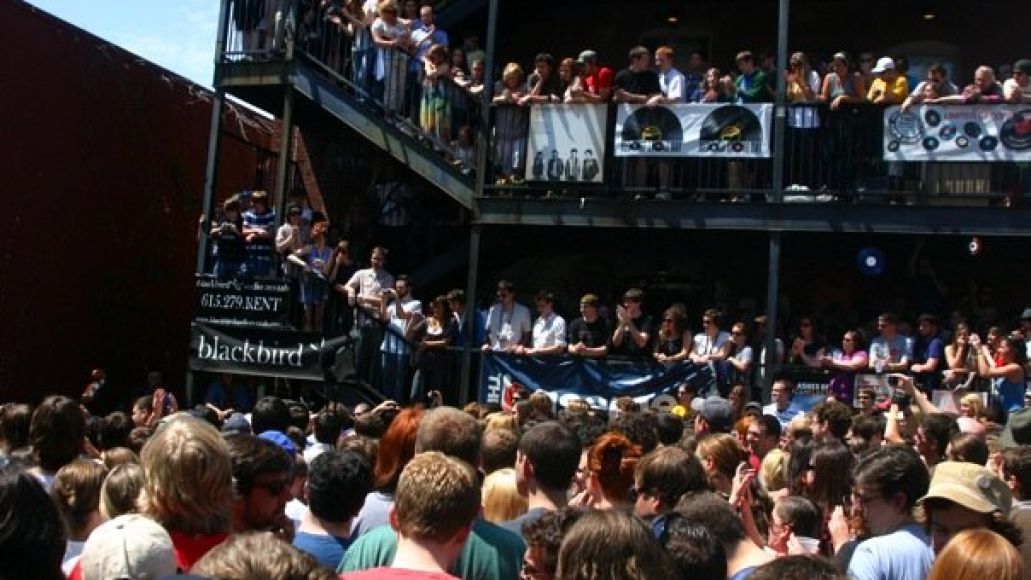 In a nation that Jim James once called “a world that is slowly turning into Everytown, USA,” Grimey’s is a shining light of local flavor, a place that is truly exemplary of what Nashville is about…helping out the locals, and having a great time doing so. And the locals love it too. The staff continually throws listening parties for the release of major albums (most recently, Arcade Fire), and will, believe it or not, hand out free beer to those in attendance at in-stores, and parties. Does your local record store give you free beer, just for stopping in? Mine does!

Friends and others who have been to Grimey’s know their courteous ways. While traveling (this one time) I saw on Facebook that Grimey’s had announced the release date of a new LP. I commented, simply asking if they would hold one for me. On the day of my return to Nashville, several weeks later, I received a call from one of the staffers telling me that my copy was in-store and being held behind the front desk. Customer service or good ol’ Southern hospitality? You decide.