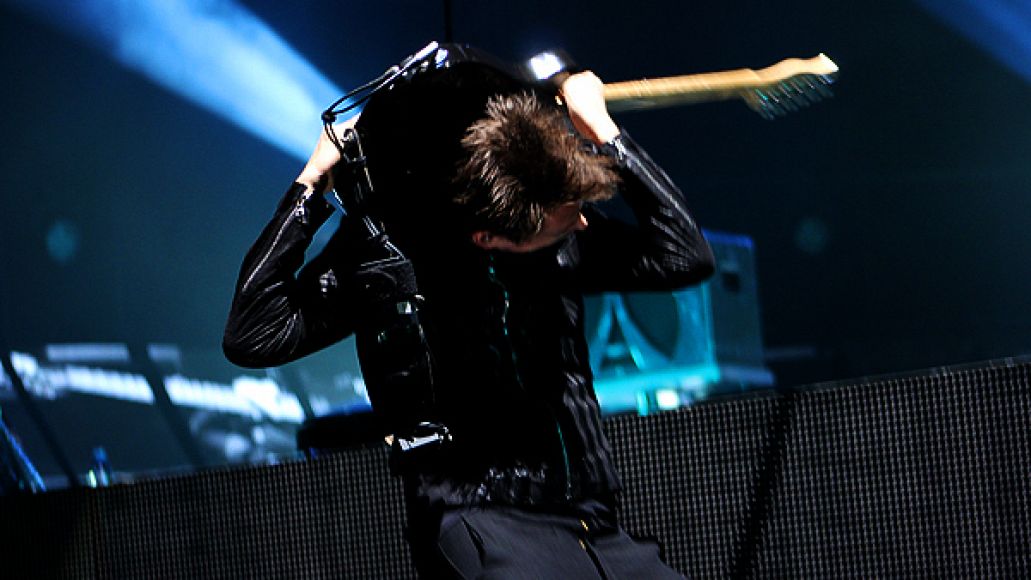 Muse may continue to impress folks with their flashy light shows and spacey music. But their sense of humor isn’t too far off. Go to YouTube, search for “Muse funny moments” (my favorite is drummer Dominic Howard’s Slipknot imitation), and you’ll see that the band members tend to tap into their inner clown from time to time. Much like any self-respected comedian, they particularly dislike being told what to do by higher-ups. In fact, they are so against any type of interference in their music that they left their U.S. label, Maverick, after being asked to remove Matt Bellamy’s falsetto from multiple tracks on Origin of Symmetry.

Fortunately, the type of musical interference we’re talking about here is far less serious. Apparently, at several TV talk/music shows in Europe, it’s customary for the musical guests  to mime to a backing track. Muse doesn’t buy into this. Not at all. So they did what they could to stick it to the producers. Taking a note from Nirvana, the trio made their lip-syncing as obvious and hilarious as possible on the BBC.

In 2001, Muse appeared on the soon-to-be-canceled children’s series Live & Kicking to play their then-current single “New Born”. The BBC producers told the band that they had to pretend to play their instruments and that there couldn’t be any live vocals as well. So how does Muse respond in the performance video? Well, for starters, Bellamy spends the piano intro gliding his hands over the keys randomly. In case that didn’t get the message across, he soon starts waving his hands in the air, nowhere near the keys he’s supposed to be playing. Once the guitar kicks in, Bellamy makes some of the most exaggerated gestures possible during the intro riff and then spends the verse with his hands in the air while the rapid guitar section plays out of the speakers. Oh, and bassist Chris Wolstenholme switches places with Howard.

The best part of this video is just how absurd Bellamy’s behavior is. He holds his guitar upside down, randomly gestures to the audience, and literally rolls around on the floor for the last 30 seconds. Howard gets in some good moves too, as he jumps around, strumming the bass like a guitar.

Muse revisited these antics later on another TV series, including the famous performance of “Uprising” on an Italian TV show about football (Why Muse was performing on a football show, I have no idea) during which all three band members switched places, with Bellamy on drums, Howard on bass, and Wolstenholme on guitar. They not only did this for the song but for the short interview afterward, too. Both of these performances should serve as a warning to future TV producers. Let Muse get on with the show. Otherwise, they’ll embarrass you and have a laugh for themselves.