This past weekend was the first club crawl-styled Hopscotch Music Festival in downtown Raleigh, North Carolina. Three days, around 130 bands, 10 venues, and one large outdoor stage, we were impressed. Hopscotch organizers Greg Lowenhagen and Grayson Currin did a fantastic job planning this festival and while we’re sure they had their share of freak-outs over the weekend, as attendees, it seemed to run pretty smoothly and we had a blast.

Thursday we checked into the Sheraton downtown (which was great and was in walking distance to everything) and headed off to Foundation Bar for the Superchunk listening party for their forthcoming album Majesty Shredding. Soon after we headed to Berkeley Café for EAR PWR, Pictureplane, Double Dagger, Javelin, and Future Islands. We also found ourselves at an after party where we saw Shit Horse, Lonnie Walker, and an Akron/Family jam session that featured Brad Cook from Megafaun and Adam Heathcott from Hometapes. We were there until 5:30 a.m.. We’re not completely recovered from it.

One of the best things about Hopscotch was that not only were there great out of town bands, but that local labels and businesses were prominently featured as well. Friday’s festivities included the Hometapes “Friend Island” day party at Pour House (Collections of Colonies of Bees, All Tiny Creatures, Megafaun, and more) and the Tamplin’s Last Local Band, Local Beer party that included a record fair of local labels (Holidays for Quince, Merge, 307 Knox, Trekky Records, Odessa Records, etc.) We hate to admit it, but we were pretty exhausted from the night before and had a pretty chill night on Friday. We ate fried pickles and saw The War on Drugs at Tir Na Nog. 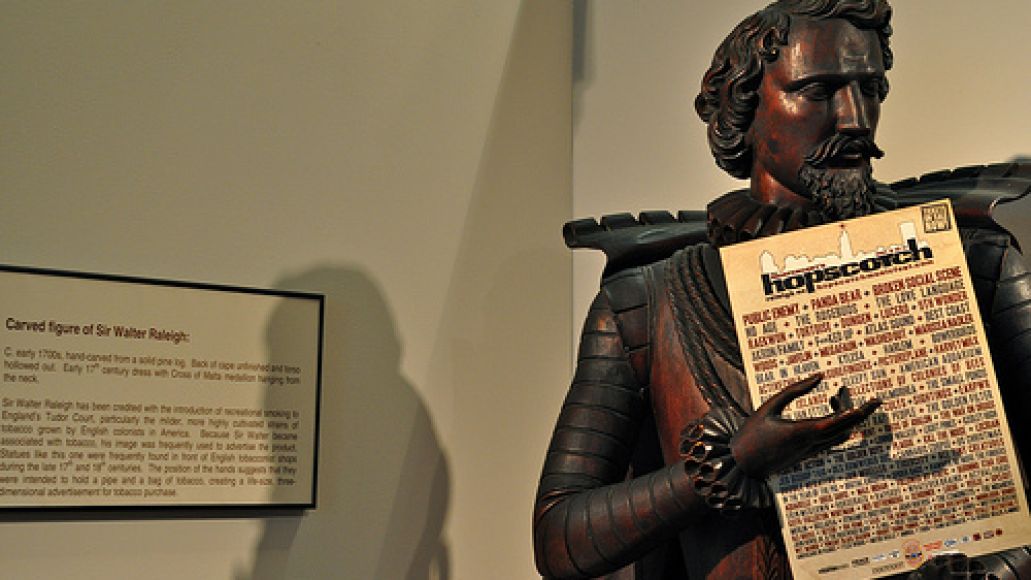 We’re big fans of the club crawl-styled festival, much better than standing in a field. Much smaller than SXSW and CMJ, Hopscotch was different in that it was less music industry-focused and more fan-focused. There were a few panel-type events in the day, like the Hip-Hop Planet: Music and Its Work in the World that featured event organizer Greg Lowenhagen, Chuck D from Pubic Enemy, Christopher R. Weingarten (Village Voice, Rolling Stone, @1000TimesYes), Charlie Smarts (Kooley High), Mark Anthony Neal (Professor of Black Popular Culture at Duke) and others. Saturday night festivities included The Love Language on the main outdoor stage, Balmorhea, Nomo, Bear In Heaven, and Tortoise at Lincoln Hall, and Megafaun at Kings.

This is just a sample of the line up from Hopscotch Music Festival. We couldn’t be everywhere, and there were a lot of performances that we missed; tough choices had to be made. Hopefully Hopscotch returns next year. We will most definitely go again. -Mario Speedwagon

In Photos: CoS at Hopscotch '10