Kele Okereke, best known as the lead singer for Bloc Party, has been a hard man to run down this summer. Kele was to begin promoting his solo debut, The Boxer, this May with a US tour, but due to unforeseen visa issues the Brit was grounded back home for more than a month. When the dates were rescheduled for September, the tour’s roster had been greatly revamped — gone was Jessica 6, replaced by Innerpartysystem and co-headliners Does it Offend You, Yeah? 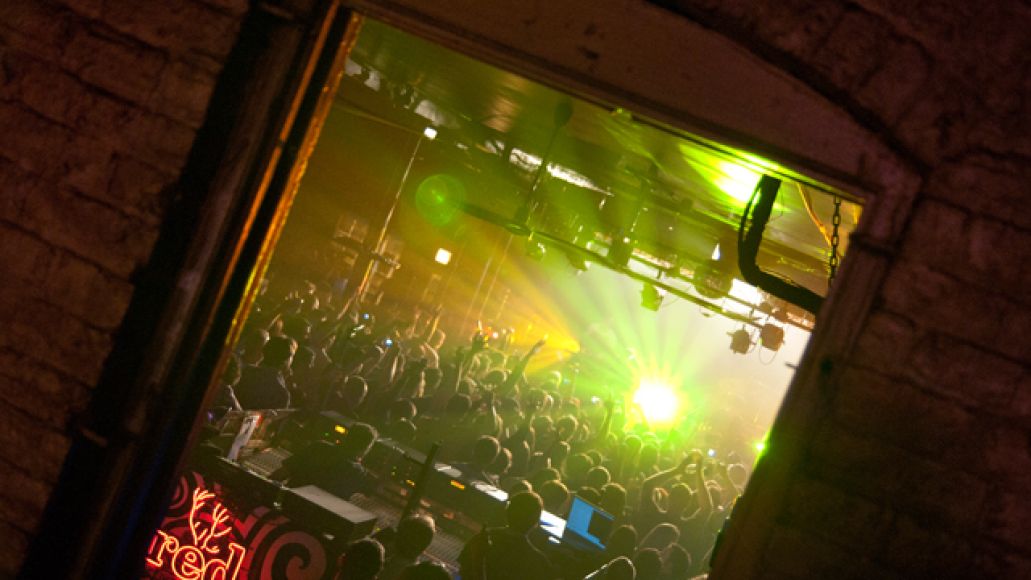 I arrived at the Double Door unfamiliar with the Pennsylvania based electro-pop outfit, but the band delivered with such energy that I was immediately compelled to their sound. Lead singer Patrick Nissley utilized the recently launched Roland Gaia to sculpt infectious digital dance beats, which were syncopated emphatically by drummer Jared Piccone. However, the band would not have been complete without the help of sound engineer, Andrew Nissley. Andrew Nissley could be seen behind the booth punching through loops on a Kaossilator and providing backing, layered vocals. The foursome drove the reluctant crowd into a frenzied dance party during tracks like “Money Makes the World Go Round”, “American Trash”, and set-closer “It’s Never Getting any Better”. That final track showcased Patrick Nissley’s “pop” friendly vocals, and introduced an outfit capable of producing crossover hits.

As Does it Offend You, Yeah? approached the stage, there was one noticeable missing piece: lead singer James Rushent. Oddly, the band didn’t mention his absence until at least three songs in, “We’re playing a lot of our instrumental tracks tonight, which can be kinda tiring” guitarist Matty Derham remarked to the audience. Appropriately the band was barraged with requests from fans for vocal heavy songs. 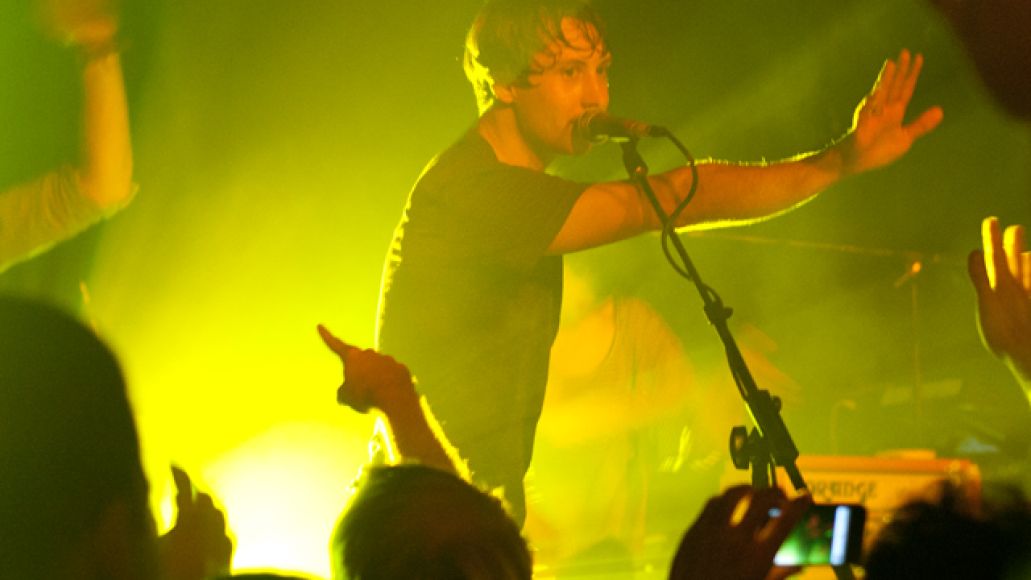 As a result, their set would be 85% instrumental with a little vocoder assistance, it was as if P-Thugg from Chromeo was making a special appearance. Even amidst early technical difficulties, Derham kept the audience involved with his witty banter. After playing “Battle Royale”, the band’s first original song of their career, Derham admitted his favorite band of all time was Chicago’s own The Smashing Pumpkins. After teasing the audience with a James Iha riff, the band broke into their new track “We are the Dead”. Caught in the fringes of the emerging dance-punk realm, the track was reminiscent of a good Hot Chip vs. Crystal Castles DJ battle, and a highlight of the evening.

Near the end of the set, Derham quipped with the audience about working in the music industry. “They always want you to write a hit” he began,” something that sounds like Coldplay. So here is our shitty Coldplay song, hope you can stand it.” But they really couldn’t miss Saturday night, and several of the more energetic fans took up crowd surfacing for the duration of the track. By the end of the set, they had displayed their ability as musicians. Staying close to their new-wave roots, glimpses of psychedelic influences shown through. Including 60’s organ led melodies and a Jimi-esque machine gun guitar solo to close the show. In the end, Does it Offend You, Yeah? are a bit lost without a singer, often falling on worn out production techniques and vocal manipulation that only distract from their actual talents of creating danceable punk tracks.

As Does it Offend You, Yeah? left the stage, members of the audience began to head out into the warm Chicago evening, helping disperse the near-capacity crowd and reveal some much needed dance floor. Aided by the abundance of smokers in the Double Door neighborhood and the club’s no re-entry policies, the crowd continued to thin during Kele’s hour-long set. 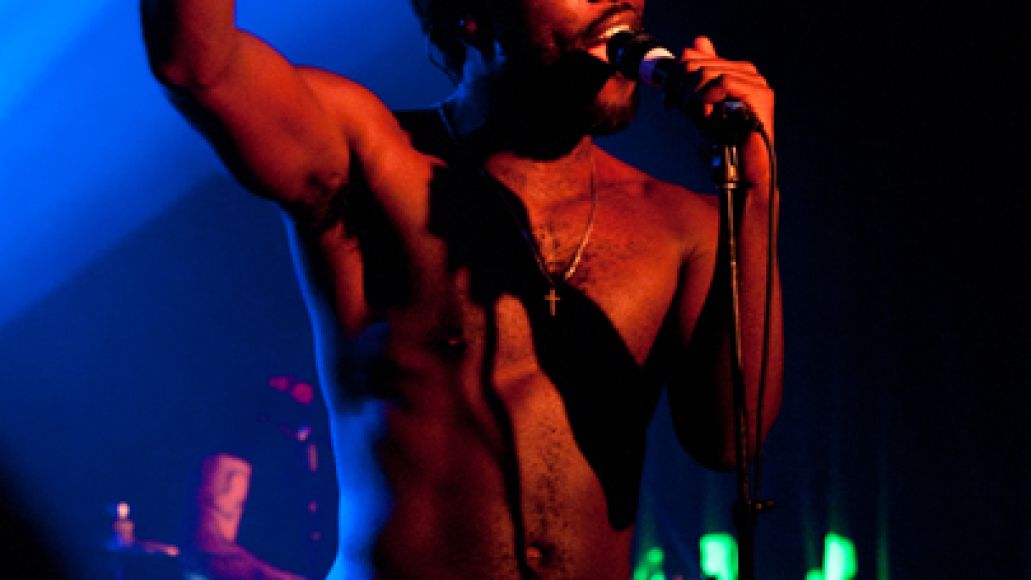 Kele took to the stage amidst an eerie Gary Numan styled intro, and immediately broke into “On the Lam”. Accompanied by a full-band, and an amazing light show, his Chicago appearance was well worth the two-month wait. Does it Offend You, Yeah? kept the energy high all night, but Kele sensed the audience needed a change of pace. The veteran frontman controlled the tempo and the crowd like a puppeteer, offering a moment of rest during the heartfelt ballad “Everything You Wanted”.

Kele wasn’t about to lets fans get too sedentary, so he stripped down to his bare chest (didn’t want to offend us with his Detroit basketball jersey) and surprised fans with a slightly revamped “Prayer”. The floors rattled as the song’s foot-stomping intro filled the room, and fans recognized the popular Bloc Party anthem. Before taking a short break, fans were left with one of summer’s most uplifting tracks “Rise”. As Kele delivered the song’s lyrics, the smile just grew across his face. He convinced us all “[we] are stronger than [we] think” and the dance floor became the location of joyous recognition.

After about five minutes off stage, Kele jumped back to the mic and announced the evening was the “most fun on Saturday night I have had in Chicago for a really long time.” A sentiment shared by many of us who spend far more Saturdays in the windy city. Kele slowed slightly near the end of the evening. Combining forces with his stunning, female keyboardist for the beautiful duet on “All the Things I Could Never Say.”

As the show concluded, I left with a new found respect for Kele’s solo work. The Boxer flows more like a compilation of singles than a cohesive LP. But Kele’s ability to infuse each performance with a raw emotion rarely scene on-stage, while luring fans in with his contagious smile and dance-proven beats is a recipe for repeat concert attendance.

Kele setlist:
Walk Tall
On the Lam
On the Other Side
Everything You Wanted
Blue Light/The Prayer/One More Chance
Tenderoni
Rise
The New Rules
All the things I Could Never Say
Flux

Kele and Does it Offend You, Yeah? take over Chicago's Double Door (09/11)