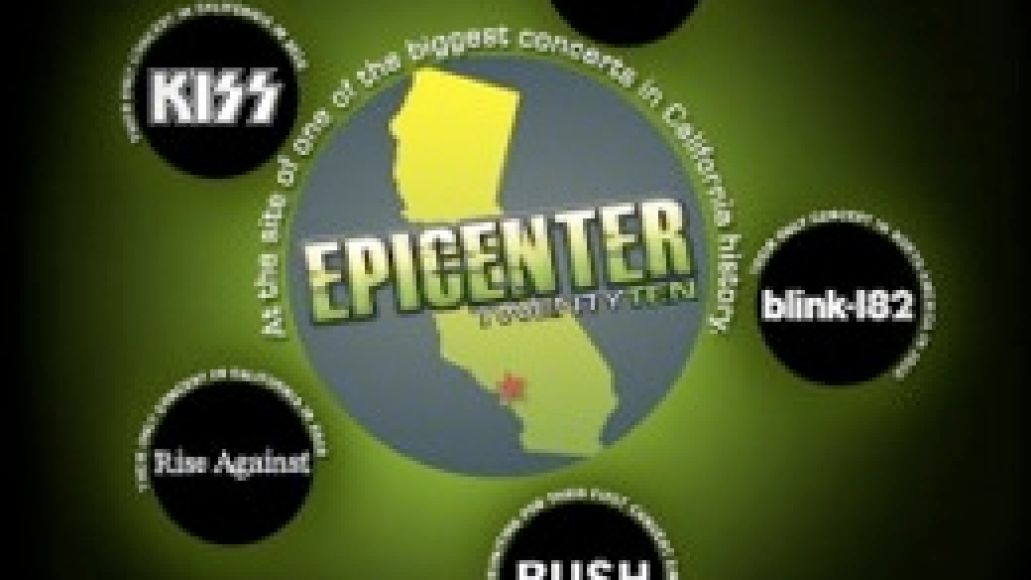 epicenter: n: point on the Earth’s surface that is directly above the focus, the point where an earthquake originates.

It’s about one o’clock in the afternoon on Saturday just outside of Los Angeles (Fontana, CA, to be exact). It’s over 100 degrees, easily. Cars are backed up all along I-15 as the heat just bounces off their metal plates and onto our faces. We will stop for ice, water, and other cold things in the midst of everything, but not too far away, something wild is brewing.

Epicenter Festival 2010 is just beginning, and it’s exactly how a festival representing the Los Angeles district of California should be. It’s hot, for one, and as a result, people are stumbling around in the sun, dehydrated, and splurging five dollars for a mere Aquafina, or buying the high-pressure spray bottles that, at any given moment, you could get doused by. The home of the show is the Auto Park Speedway parking lot, which resembles a prison yard more than it does a live music event. With the high tower spotlights, a giant wall to one side, fences, and minimal amount of room, it’s like we’re trapped in together, and at any moment there could be a riot a la Natural Born Killers.

With most sets scheduled short, the majority being roughly a half hour, people are here to see a wide variety of bands, as Epicenter seems to cater to a wide assortment of music fans, which in turn creates a strange, mixed bag of vibes. Nu-metal fans roam zombified (for bands like Papa Roach and Smile Empty Soul), hip-hop fans chatter all day (for Big Boi, Big B, and Marshall Mathers’ return to LA), the checkered shoes Warped Tour crowd frolic around (for Against Me, Bad Religion, and Blink-182), and, of course, the KISS Army stakes its land.

Now that I’ve painted that picture for you, it’s easy to see why Epicenter Festival appeals to the masses. It’s accessible, it’s relatively cheap, and it’s chock-full of mainstream acts. That being said, it’s hard to talk about whether or not it was a comfortable experience. The jury’s still out on that one – at least right now.

Too Much Heat and Makeup: CoS at Epicenter '10