Hampton Coliseum in the far east of Virginia is 40-years-old. The venue has a long history, including brushes with Elvis Presley and Led Zeppelin (twice), and is known as the final performance venue of Cliff Burton-era Metallica. While, sadly, said coliseum has fallen into a state of minor usage during the advent of outdoor festival popularity, my first trip played host to three of the “Big Four” in thrash metal; on a cold day in October, with devil horns and aching necks aplenty, I entered a thrashing time machine thanks to an immortal building in the east. In the words of Jack Black, “The metal lives on.”

Jagermeister Music Tour 2010 has resurrected the 1991 United States leg of the Clash Of The Titans Tour: Slayer, Megadeth, and Anthrax. Notably, Alice In Chains is missing from this listing; however, they are currently booked with Black Diamond Skye, and Anthrax has Belladonna back, so all is forgiven. A fair turnout of fans were loyal to the tail end. The generational spectrum went from eight-year-old kids rocking over-sized Mohawks to my age group (in all of its sweat-stained, rock shirt glory) to formerly infatuated groupies turned soccer moms. Did the Titans get their just worship at the altar of metal? It wasn’t a packed house, but the air was thick with loyalty and beer. While the bands in question deserved a much more bombastic send-off than was provided, I joined the floor show enough to know that I appreciated what they brought to our humble American coastline, and my muscles still feel the burn.

Anthrax opened proceedings on a graceful note. Band members entered one by one via an introduction from the tour’s emcee, the highly enthusiastic pharmacist-turned-DJ Jose Mangin of Sirius’s Liquid Metal. During their stringently short setlist, Anthrax’s big selling point of the night was Joey Belladonna’s return and the promise of a new Anthrax CD come 2011; making it work to every advantage, Anthrax culled single after single from Return Of The Killer A’s, striking up “Antisocial”, “Madhouse”, “I Am The Law”, “Indians”, and “Caught In A Mosh”. While the majority of attendees came for the two co-headliners, Anthrax displayed pure professionalism on all fronts; the technical aspects were squared, though frankly, a tuned-down microphone on Belladonna would not have hindered the man much. 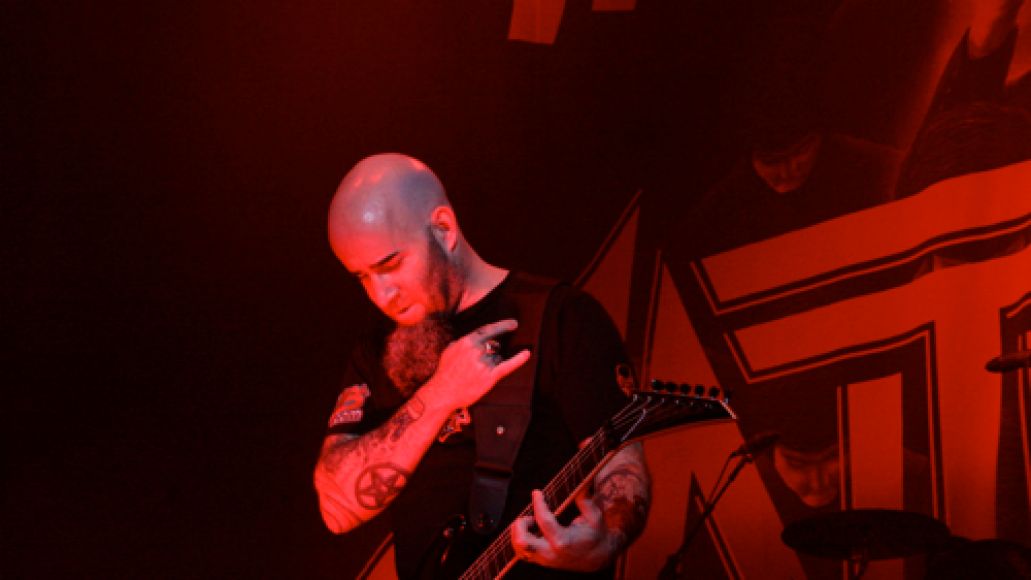 Anthrax’s guitarists — the infamous Scott Ian and newcomer Rob Caggiano — played their parts respectfully, the former remaining a steadfast rhythm with courteous backing vocals. With Belladonna returning in full form, the New York thrash and punk outfit was rife with enough energy to hold its own headlining stint. Alas, the set was much shorter than anticipated, due to Anthrax having been included last minute (I know that feeling all too well). This being my first time seeing Anthrax perform, I was left wanting, but the short burst I received got a warm welcome from everyone present.

Both co-headliners were to perform esteemed records in their entirety: Megadeth’s Rust In Peace and Slayer’s Seasons In The Abyss. As previously mentioned in my Rust In Peace: Live album review, the experience is something one should have in person, and here we stand delighted. Megadeth entered the fully decorated stage during a prerecorded voice announcing the enactment of Martial Law (military law, for those not in the know), and suddenly it was a virtual heavy metal opera. Much like the album mentioned, I relived the performance almost spot-on without hesitation.

From opening leviathan “Holy Wars…The Punishment Due” to the bass notes of “Dawn Patrol” (featuring someone costumed as its album cover’s main antagonist) to the titular closing track, no one missed a step. The down side? Hearing Mustaine over everything else going on was damn near impossible during the Rust In Peace portion, although he truly played to the crowd from A to Z. Highlights of the Rust set were covered in about the first half of the namesake album, particularly “Hangar 18”, “Holy Wars”, and “Five Magics”, though “Dawn Patrol” was short and sweet awesomeness in and of itself. Megadeth gave a finale of standards like “Symphony Of Destruction”, a revenge-laced “Headcrusher”, a “Peace Sells” encore, and a biting interlude from Mustaine about talking French to women before entering “A Tout La Monde”. A fond farewell, a thousand thanks, and it’s on to the next one. 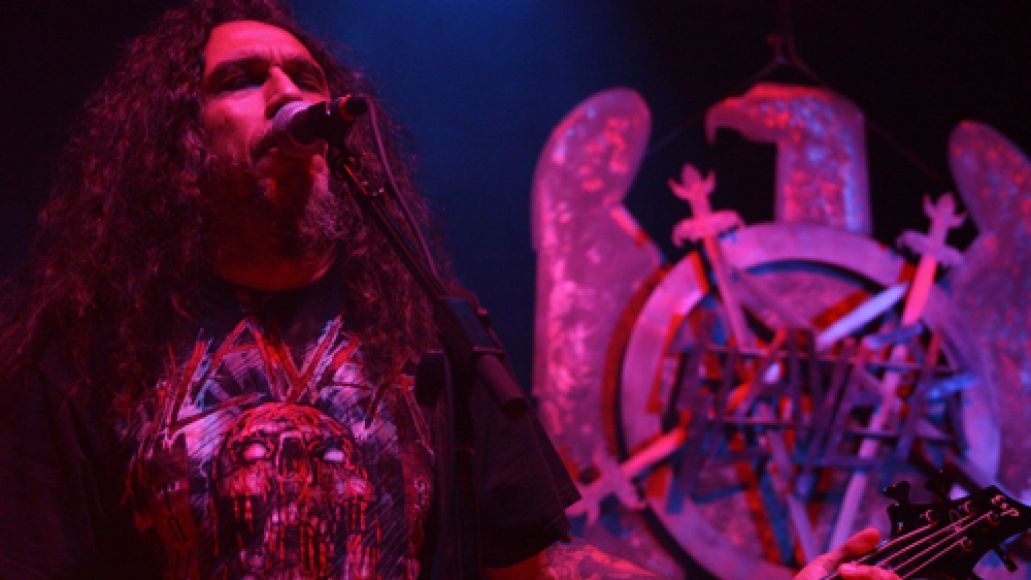 A troll on my ’09 Mayhem Festival review went on to state that a stack of Marshall amplifiers does not make a metal show, and he is partially correct. The Marshall stacks cannot do all the work. They can only provide your ears with appropriate amounts of deafening roars and deadly decibels. Slayer is and always will be metal, both on and off the records, and tonight was no exception. Unlike Megadeth, Slayer opened with two tracks from its latest offering (“World Painted Blood” and “Hate Worldwide”) before launching right into Seasons In The Abyss — the release noted for introducing the world to “War Ensemble”, amongst others — and book-ending with a finale of “Aggressive Perfector” and ”Angel Of Death”. 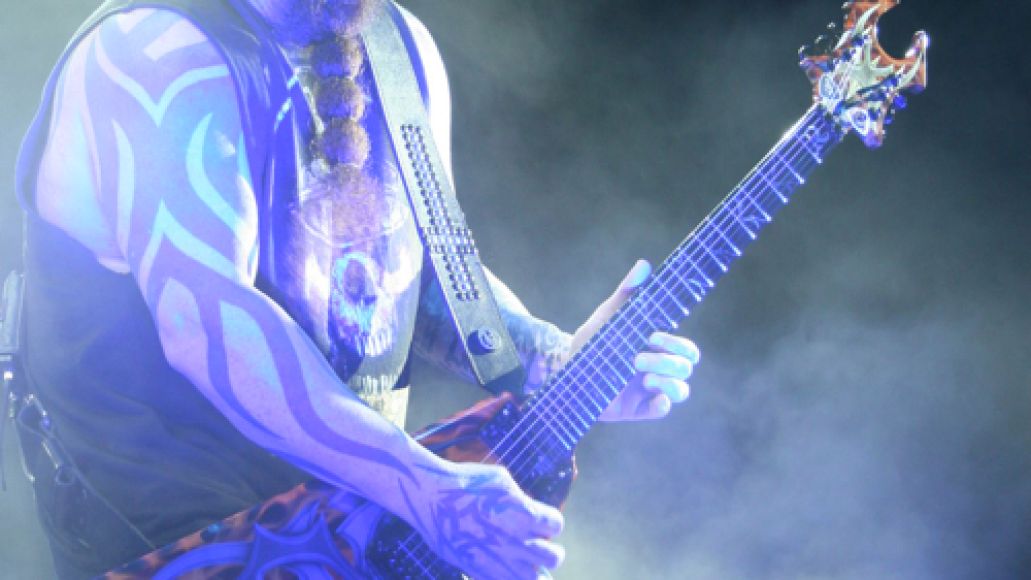 Aside from Hanneman’s guitar hitting a technical snag during “World Painted Blood” and the near incoherence of Tom Araya throughout the set, most of Slayer was sheer noise and moshes, an unadulterated frenzy as expected from the band whose notoriety in the mainstream stems from a song about a sadistic scientist at the Holocaust encampments. Like Seasons ought to be, the energy of every song never waned for a second; the punch of “Expendable Youth”, the derision of “Dead Skin Mask”, the titular track’s mighty closing echoes–the King/Hanneman solos, the sheer loudness of everything going on around me, even in a partially filled theater. This is metal, ladies, pure and simple.

For a summation of the evening’s overall tone, please refer to Rust In Peace: Live, Slayer’s Seasons In The Abyss and World Painted Blood, or get some balls and catch Jagermeister Music Tour yourself. Also…drink responsibly, or the hyperactive Bill & Ted reenactment known as Jose Mangin will come to your house and scalp you like a savage with a…linoleum knife! Metal, bitches. Also, another shout-out to Dave Lombardo for totally holding up his end of the percussion during Slayer’s set — always a pleasure, man.

Anthrax
Caught in a Mosh
Madhouse
Antisocial
Indians
A.I.R.
Metal Thrashing Mad
I Am the Law