Being the new guy in an established band is not often something fans or band mates take lightly; between the bassist drama of Metallica and the vocalist switch of Van Halen, history shows that uprooting the original lineup of a band with a dedicated following rarely goes unnoticed. At times, some unfairly poke and prod at the fresh meat like a weird science exhibit, nit-picking at every perceivable flaw.

Drummer Ray Luzier was named an official member of Korn in 2009, making his presence known in a stellar 2008 audition before first playing a Dublin show with the band months later. A former member of Richard Patrick’s Army of Anyone side-project and also a contributor to David Lee Roth’s solo career, Luzier is well aware of the competition involved with his instrument of choice. He mused during our dressing room interview:

Well, I’ve auditioned for so many bands […]. What’s going to separate you from the other hundred drummers standing in line? I always take the approach where, like the Jake E. Lee gig [for his band Badlands], Ozzy Osbourne’s guitarist, I got that gig out of about a 150-drummer cattle call. […] I went in there, I was the last drummer of the day, and they were so tired, just miserable, and they were playing the same damn three songs all day. I went in there, I learned and knew the Ozzy catalog anyway ’cause I’m an Ozzy freak, but I already knew the entire Badlands catalog, Jake’s band before. I said, ‘Hey man, why don’t you play “Soulstar”,’ and they’re like, ‘Eh, just stick to the set list.’ The bass player’s like, ‘How does that go again?’ He starts playing, Jake shows up, next thing I know there’s a new energy in the room.”

As for the Korn rehearsal, it was a little less formal:

With Korn […], I was already a fan from way back, so, I knew the catalog quite well. It was just a matter of playing with it. We went up to Seattle, the last gig that Joey [Jordison, of Slipknot, temporary replacement] did. It was so bizarre. I was in this empty arena, had this crappy drum kit set up in front of Joey’s, sat there at noon, and [Korn] came in. We played…six songs, and they said, ‘Welcome to Korn, we’ll see ya in Dublin [Ireland],’ […] and that’s what happened. Rehearsed once at the venue.” 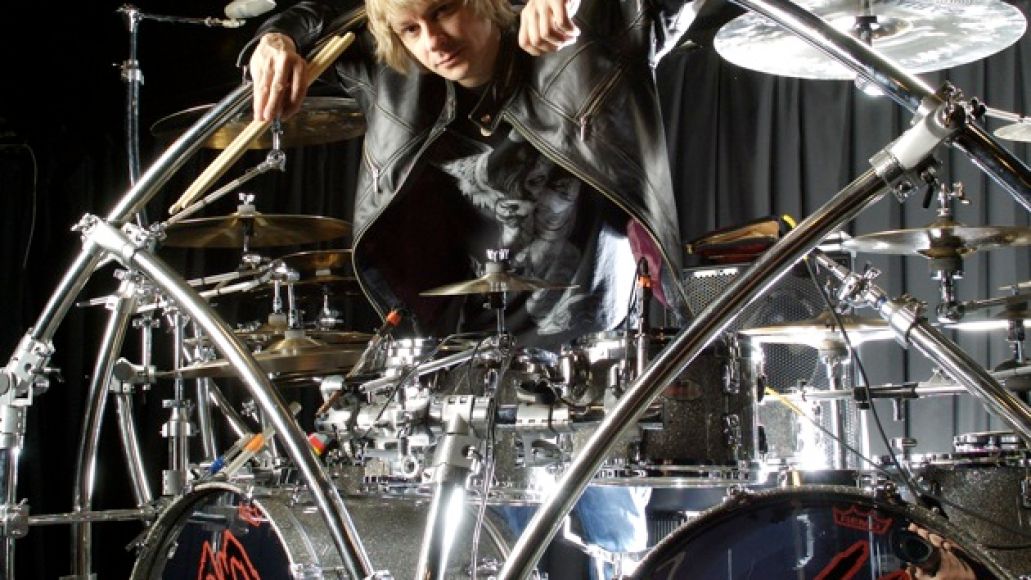 Luzier was very casual when posed with questions regarding former Korn drummer David Silveria’s place and agreed to a similar philosophy of mine of apples and oranges. As a fan of Korn himself prior to joining, he knew full well what was coming. On filling in shows, Luzier remarked, “In the end, I don’t care what level of musicianship you’re on. Me and David [Silveria] are two totally different drummers, night and day.”

Segueing from musicianship, a little insight into the recording process for KoRn III comes to light — Ross Robinson style:

When we were recording with Ross [Robinson, producer], […] he didn’t care how much experience I had. He didn’t care. He wanted to make sure, like, ‘What are you doing here?’ This is where we started this thing. [The process] threw me for a loop, because there was no click track, and, as a studio guy, I’m used to that guy banging in my ear. So, if you’ve had too much caffeine one day or didn’t get much sleep, that machine never lies, it’s always right there. Ross is like, ‘I will not let you ruin this record with a click track.'”

While it was apparent that comfort had become a non-issue with Robinson, Luzier reminisces on bleeding for the record. A drastic difference in decorum from Luzier’s previous experience with the likes of Bob Ezrin for the Army of Anyone sessions (“He was all about, ‘Let’s get that hit song.’ Ross could give a shit about hit songs. Ross was about what was in your heart.”), Robinson yielded zero tolerance for bullshit it seems:

[crosses arms] My arms were like this […], there was crunching cymbals, screaming…I was either sweating, bleeding…There was…it was just, yeah, it was crazy. He wanted it back to the old school Bakersfield days. At first I was pissed. I was so uncomfortable. Ross is like, ‘Exactly. Exactly, I don’t want you comfortable.’ The instrument in front of me, it was the last thing on my mind. […] There were times I wanted to wring Ross’s neck. [Robinson] could get on someone, make me feel this small [motions with fingers about an inch apart].”

At the end of the day, Luzier is about as casual as a person gets, but he takes his job seriously. The vibe in the room echoed back to our chat with Dave Lombardo the previous year, a laid-back conversation with no real shake-ups. On the other hand, there was the apple fiasco…

While our review of the new Korn release may have been less than stellar, the fact remains that Ray Luzier is no longer the “new guy” but a definite and determined fresh inductee into the quartet that is Korn. Nu-metal might just make a comeback, ladies and gents.