Fall may have just arrived, but ethereal Canucks Wintersleep lived up to their name by icing over the walls of Chicago’s Vic Theatre on Friday with their unique brand of anthemic mood rock, as if beckoning the Winter solstice with a glacier of guitars, black night bass, ghostly keyboards, and darkly internal lyrics.

The band silently took the stage in a pool of crystalized blue light and launched into the layered, windy melancholia of “Drunk On Aluminum”, brooding and focused as frontman Paul Murphy’s steady tenor echoed throughout the cavernous space, enriched and textured by Jon Samuel and Tim D’Eon’s haunted keyboards and guitars as they switched instruments throughout the evening.

The set was pulled entirely from their two most recent albums, ranging from the apocalyptic, collapsing twilight imagery of “Baltic” and “Laser Beams” to the more pop oriented, accessible momentum of “Archaeologists” and “Weighty Ghost”. But the band strategically saved their sharpest stalagmite for last with set-closer “Miasmal Smoke & The Yellow Bellied Freaks”. Clocking in at eight and a half minutes of sheet upon sheet of icy instrumentation, including the staggered wooden brunt of Loel Campbell’s drums, the fuzzy, staccato growl of Mike Bigelow’s bass, Samuel’s ascending church organ, and the entire band’s choral vocals, the song was “Wake Up”‘s bigger, meaner sister with its lyrics of painful youth and countless punk rock signature shifts. It left the audience speechless and enchanted, leading to thunderous applause as the band departed the stage as quietly as they came. 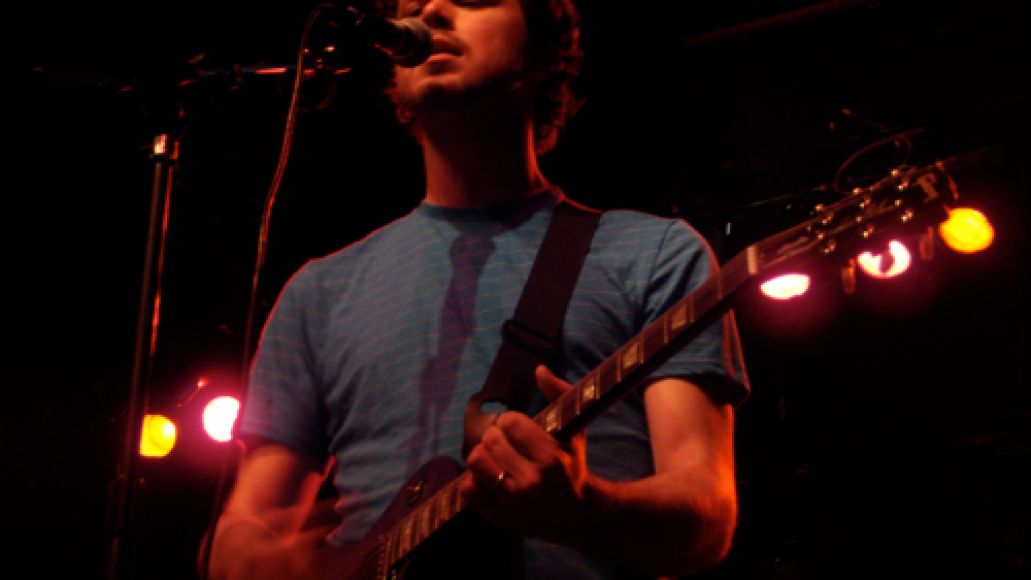 The Hold Steady carried over this stoic vibe into their own set with an uncharacteristically calm opener, the spooky, acoustic “Both Crosses”. Spastic, charismatic frontman Craig Finn took the stage in darkness, calmer than usual as he faced the crowd to tell his campfire tale of eerie love and predicted crucifixion. As soon as the song ended, he transformed into his usual energetic self on cue as the band launched into crowd pleaser “Stuck Between Stations”, sending the audience into a welcoming whirlpool of working class dance, hand claps, and fist pumps that thrashed over the next five songs before the set slowed down once more with “The Sweet Part Of The City”.

Now there’s no question that The Hold Steady remains one of the better live acts touring today. “The best bar band in the world” moniker has grown tired, as they’ve come into their own as a bonafide arena rock outfit (only without the arenas), while still retaining their freshness and unpredictability. Finn continued to physically immerse himself in his confetti drenched street tales of clairvoyance, shady characters and even shadier parties, shuffling around the stage and acting out lyrics with his hands while the band kept it together around him, able to harness his improvisation with their gritty chops. I’ve always thought Finn overdoes it just a bit with the giddiness (particularly on their more serious songs), but there’s no denying his sincerity and appeal, his unplanned vocal and dance antics rendering him a more jovial Van Morrison.

The rhythm section of Galen Polivka and Bobby Drake is always a pleasure to watch as well, as they formed their own groove pocket on the stage, sliding and thumping with each other to catch Finn on his next uptake, especially effective on more bass driven songs such as “The Weekenders”, the down and dismal sequel to “Chips Ahoy!”.

Of course, the absence of former keyboardist/multi-instrumentalist/back-up vocalist Franz Nicolay must be mentioned. This is the band’s first tour without the mustachioed sideman, who was arguably their biggest onstage personality next to Finn. Although new ivory tickler Dan Neusadt did a fine job filling in the piano and organ sections, some of the kookier effects on songs such as “Navy Sheets” were missed. And while the backup vocals of guitarists Tad Kuebler and newcomer Steve Selvidge (formerly of Lucero) were pure and serviceable, they just didn’t match the operatic vibrato of Nicolay on anthems such as “Stuck Between Stations”, “Stay Positive”, and “Massive Nights”.

But the band more than filled the space of Nicolay’s flourishes by savagely amping up the guitar work. The addition of a third guitarist, plus Kuebler’s already blistering (and constantly growing) axe skills, propelled rabble rousers like “Banging Camp” and “Southtown Girls” into true dueling epics as they traded bent and whammied barbs that relied on prowess and little else, leaving most of the effects pedals at home. The greatest guitar moment of the night (with Kuebler’s double necked assault on “Lord, I’m Discouraged” being a close second) came at the encore, with Finn, Selvidge, and Kuebler all forming a circle during the false ending of “Your Little Hoodrat Friend” to play an improvised, dreamy mosaic of three different riffs that cycled in a round before launching into the song’s unified, power chord finish.

The most transcendent song of the night (and the biggest testament to the communal power of the band’s music) came with the final encore, “Slapped Actress”. After the band stopped playing, the crowd continued the “whoa ohs” that end the song at Finn’s behest, replicating the a cappella choir effect that closes Stay Positive. Finn gushed his appreciation to the audience as he and his bandmates left the stage, although a more tangible thank you came earlier in the evening with Finn changing the lyrics of “Chicago Seemed Tired Last Night” to “Chicago’s Fucking Awesome Tonightt”. He probably says similar things to every city he goes to, but as is the case with his music, we know that he means it.