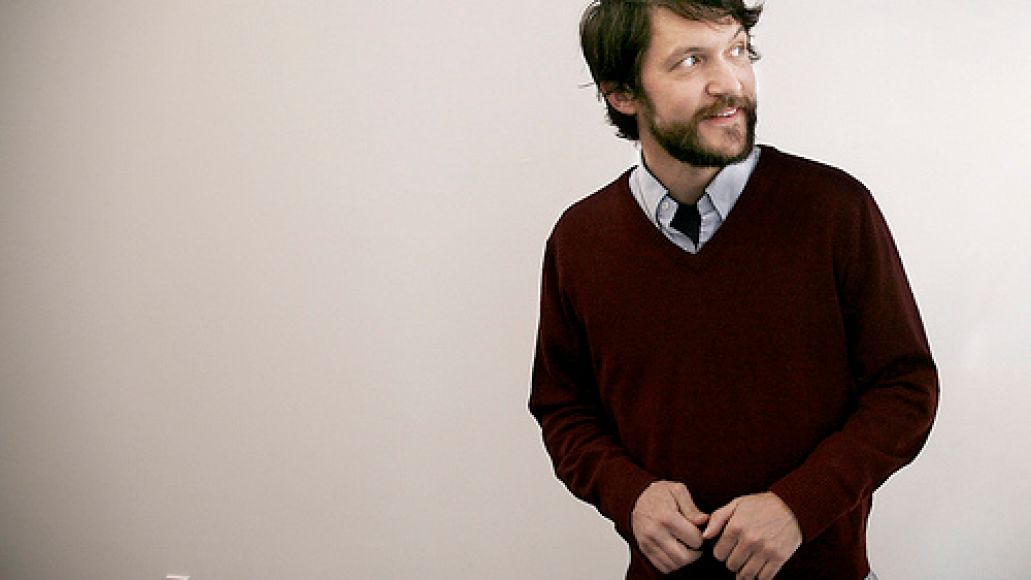 Tim Kasher has been a musical hero of mine since my freshman year of high school. When I first heard Cursive, I was instantly impressed with their sound, and when the Burst and Bloom EP and Domestica came around in 2001, I was blown away. “Mothership, Mothership” is still one of my favorite songs of all time. Then when someone introduced me to The Good Life, I couldn’t believe that it was the same guy. The soft orchestrations and somber lyrics really hit home.

And now Kasher has delivered a fantastic debut solo album The Game of Monogamy. He previewed the new album at a small show at Chicago’s Tonic Room back in March, which I was fortunate enough to attend. It was just Kasher and some friends playing some of his most personal and heartfelt songs to date. Since then, Kasher has kept busy by being on the road and promoting the new record. He took some time out to talk with me the morning after a show in San Francisco. I asked him about the album, his other projects, and his upcoming New Year’s Eve Domestica anniversary celebration in Chicago.

Why a solo album? Was it just a matter of you having a bunch of songs written?

I made the decision about 20 years ago. There were some things I’d written for a proper rock band, but another batch of songs were kind of my own songs that didn’t necessarily need a band at all. And that became The Good Life about 10 years ago. I guess the ultimate question would be, “Why is this not a Good Life record?” Over the last five to seven years, The Good Life became a rock band in its way, and so I just had to let it lie. It’s hard using my own name. It’s something I always assumed I would do when I got older, and I found that I had gotten older. My goal for this first record is to help me get my name out.

Do you think you’ll release more solo albums, or are you going to stick with this one and see where it goes?

I’m definitely going to. I don’t like putting a limit on any project. I think it’s better to make these decisions rationally. So I’m going to keep going with it.

I think my long-winded explanation is I knew that eventually I would start writing under a different band name. Just be a songwriter and try to have flexibility, which I am really loving so far. I try kind of moving from Cursive and The Good Life; I bring all the ideas together. Using my own name, I’ve definitely recognized I can do a solo album. I can work ideas better. I can be weirder and louder like Cursive or softer like I did with The Good Life. There’s not a precedent already. It’s just a moniker.

On the solo album, you return to very personal lyrics, something you haven’t done with a Good Life or Cursive album since Album of the Year or The Ugly Organ. Was there something that happened during the process of creating this album that made you move back to the more personal lyrics?

I think I would suggest writing in this fashion. It’s very much like personal lyrics are always my best if I have my wits about me. I don’t know. I guess in my opinion you do what you like with each album, so I really intentionally try to take a different approach with each album. But starting out under a different title, I could really let my lyrics swing that way again.

That’s one thought, but I also think that if I would’ve written a Cursive record next, it probably would’ve felt like it was acceptable to string out my passion. Again, I guess I just try to keep an eye on that and making sure it’s not the same thing each time.