The Tabernacle is another of London’s music venues with a bit of history; a curious amalgam of terracott and red brick, flanked by towers and spires and fronted by an bulbous semi-circular facade. The building dates from the late 1800’s and originally housed an evangelical church. Today it is a centre for community arts with a theatre, art gallery, spaces for dance and music rehearsals, bars and a restaurant. More pertinently for us, it regularly hosts live music events.

There is something that still invites reverence about the place. The auditorium is a big open space with a raised gallery along three sides, offering perfect views of the wide stage. Down below, the seating is arranged around large circular tables, fairly tightly packed. It should create a near perfect ambiance but the set up does place a kind of barrier between the performers and their audience. This makes for a polite but possibly less committed atmosphere.

First up was The Shadow Orchestra. Visually the five-piece appear bright and engaging on stage. The diverse instrumentation numbering cello and harp, alongside electric guitar, drums, and keyboards, played by vocalist, Mary Erskine, is immediately striking. You could very probably exhaust a whole raft of musical tags and put your aged Thesaurus into overdrive without coming up with an adequate description for this band’s musical style. There were elements of jazz, classical, dance, electronica and much more in the mix.

Kicking off with “Folkstep” which was prefaced by the rare spectacle of duelling cellos, their set largely featured songs from a debut album due in Spring 2011. This included “Off Day” a track that was only finished on Monday, though it didn’t show. The set flowed like a languid river: mellow, reflective and down tempo to fit with the predominantly acoustic vibe of the night. “Matilda” from the current Remaker EP was a nicely chilled, ambient soundscape decorated by a dreamy vocal from Mary Erskine and by Kat Arney’s filigree harp. The closing instrumental, “Direct Out” showed off the band’s electronic leanings especially well. 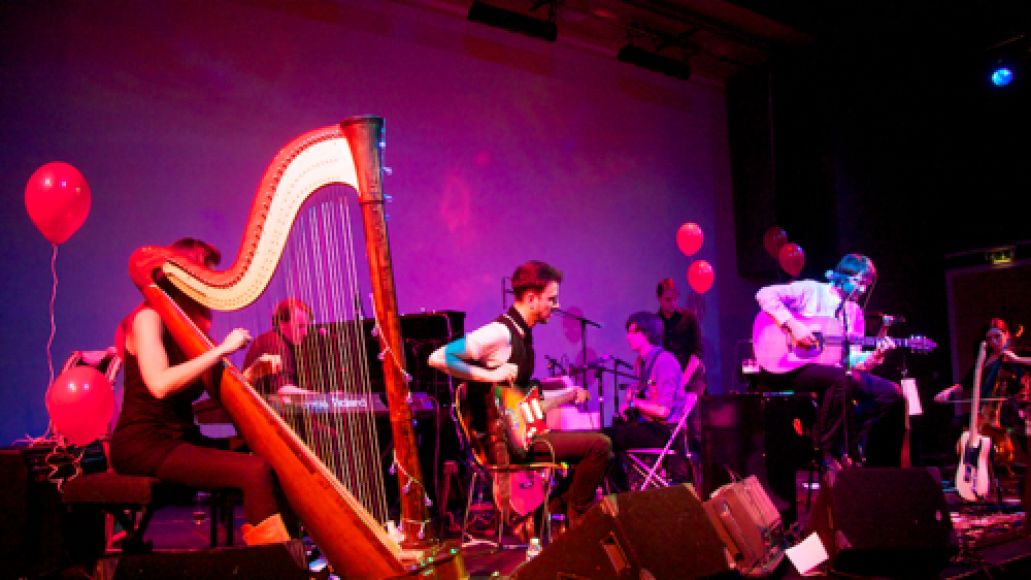 The audience remained attentive and appreciative throughout but this also set a tone for inhibition that continued throughout the evening. The Shadow Orchestra turned out to be an apt starter for a main course of London’s finest unsigned band, Revere. Still unsung by the mainstream, Revere continues to produce amazing, melodic music that pushes boundaries in all kinds of directions. Tonight the band showcased their lighter side with a semi-acoustic set designed not to trip out the venue’s decibel limiter.

In keeping with the restraints imposed by the building, Revere had ditched its more familiar full-on electric intensity in a set that mixed up old and new. The beautiful violin-driven lament, “Too Many Satellites” which closes the band’s album, Hey! Selim, swopped places as the opening song. There was some uncharacteristic hesitancy in the delivery but the acapella ending was a delight.  The nerves seemed to continue during “As The Radars Sleep”, maybe because an ambient build replaced the trademark pounding drums opening. Thankfully the strident rhythm of the second half of the song really settled things down.

“Maybe In Time” which followed was a real triumph. The arrangement was much closer to its usual live treatment and the orchestral instruments, allied to Stephen Ellis’ heart stopping vocal, came through strongly while Nat Mumford’s signature trumpet at the end really punched the air.

Lead guitarist Jonathan Fletcher switched to piano to deliver a staccato melody line for the chilling “They Always Knock Twice” while the brand new song “There When I’m Gone” featured an unusual guitar effect from Ellis as he switched from acoustic to electric. The band’s front man used what looked like a small Phillip’s screwdriver to tease out a lush delayed string effect on this powerful ballad. To complement the Revere originals, the set included two covers – Joy Division’s “Love Will Tear Us Apart” and Scott Walker’s “Boy Child”. The former was beautifully stripped back to Ellis’ sensitive vocal and acoustic guitar, and Kath McKie’s delightfully understated cello. A short trumpet break added to the mournful feel. 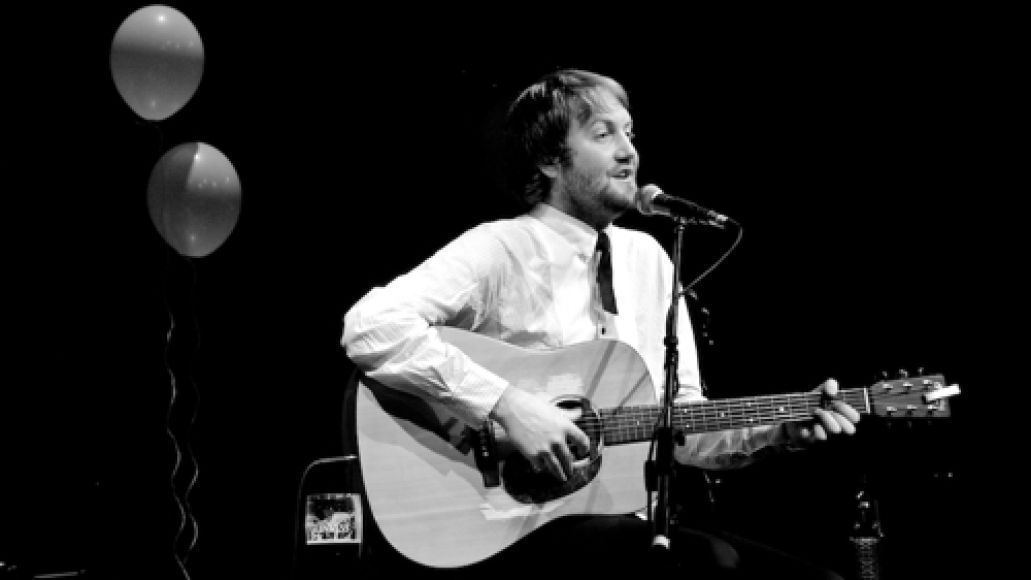 The episodic “A Road From A Flood” got an extremely warm response for a new song with Fletcher contributing some lyrical slide guitar and calmly handling the annoyance of a broken string. Revere’s eight-person line-up filled the stage but there was enough room for a guest harp player on some songs, notably “The Hating Book”. The bittersweet irony of the song was amplified by the starkly projected lyrics as the song reached its climax. Despite a number of highlights along the way amid some nervous moments, the very best came at the end of the set as Stephen Ellis launched into a bare-all performance of “What Am I If I’m Not Even Dust”. This is a song you feel you must have heard before, but haven’t. A classic in the making.

Revere’s flagship song. “The Escape Artist” was saved for the end. It’s a piece that works virtually as well acoustically as in its full electric guise. The dynamics are different but the uplifting message of hope conquering the trials of separation and inhumanity shines through. Hallmarked with an awesome melody and played as one with real heart by the whole band, “The Escape Artist” put an indelible seal on the evening. All in all, this was an ambitious show that largely came off. The quality of the musicianship came through strongly but equally with eight or nine on stage contributing delicate interweaving parts there are times where there is nowhere to hide. A few people may have regretted the band not appearing in its full electric splendour and the audience didn’t quite seem to know how to react when Stephen Ellis took to the stage for a solo encore of “Feed The Birds” from Mary Poppins. But this is some band and long may it continue along the long and winding road to fame and glory.

Revere setlist:
Too Many Satellites
As The Radars Sleep
Maybe In Time
They Always Knock Twice
There When I’m Gone
Love Will Tear Us Apart
A Road From A Flood
Boy Child
The Hating Book
What Am I If I’m Not Even Dust
The Escape Artist
Encore:
Feed The Birds