There is really no limit to the amount of live music Chicagoans can consume in a week. Chi-town has become a national destination during Pitchfork and Lollapalooza, but the true identity of the city’s strongly independent music resides in its innumerable intimate venues. But as popularity shifts and these venues become destinations for national buzz-bands, the city has sacrificed a Chicago original: house music. In a city dominated by hip-hop and plaid, a sizeable dance party is nearly as difficult to find as a downtown hot dog vendor with ketchup. But as Halloween weekend swept through town, fans at Chicago’s Double Door were treated to the “Magical Properties Tour” courtesy of the west coast’s finest break-beat artists.

Costumed or not, those arriving early enough got the best treat: co-headliners Daedelus and Gaslamp Killer working the crowd. And with sideburns straight out of the history books, Daedelus (born Alfred Weisberg-Roberts) is easily recognizable. With a few minutes to spare before tour opener Teebs took the stage, I asked Daedelus to share some thoughts about the current tour and sound.

The first time we caught you this year, it was during a surprise performance at North Coast (Music Festival). How did that go down?

That was really unexpected. I was only there because Benga had to cancel. They called me in Los Angeles like two days before the show and asked if I could play.

You had a pretty quick return.

The city has a great music scene. But so much of it is dub, indie, indie hip-hop, there is really nothing with these kinds of breaks here. I wanted to show everyone what we are doing.

So how did you go about assembling the lineup? 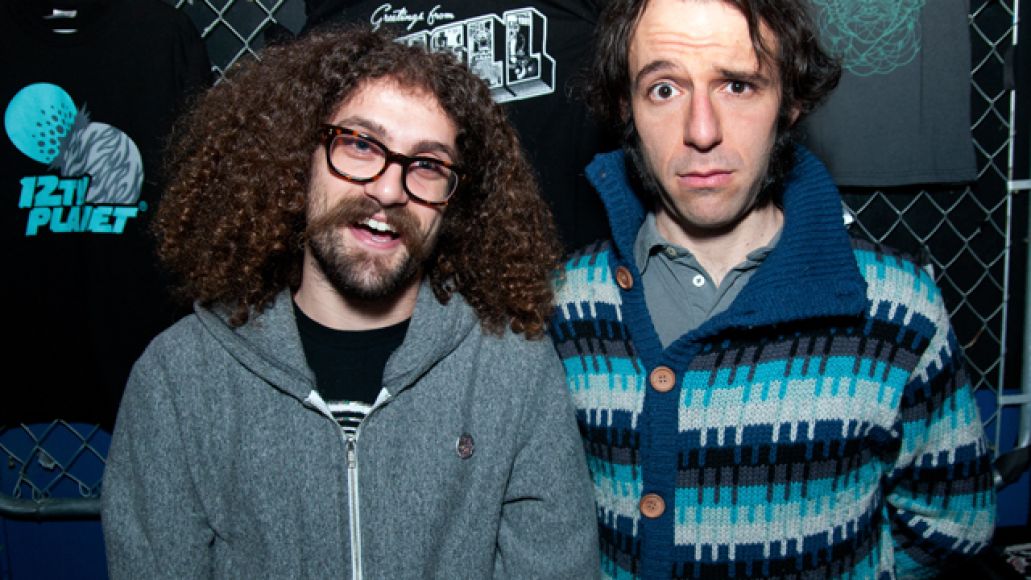 Gaslamp Killer is notorious for his live behavior.

(Laughs) He is really into it.

During the national “Magical Properties Tour” you feature multiple artists under Flying Lotus’s record label, Brainfeeder. How did the relationship develop?

I have also released under Brainfeeder. I have known Flying Lotus for several years; I’ve known all these guys for years. We’ve all worked with each other before. I knew both Flying Lotus and Teebs before they were even making music.

With those words, Teebs began what one would expect from someone of his tutelage: chilled out break-beat. While the hazy beats are infectious, they are more suited for the living room than the dance floor. In a city more accustomed to four-on-the floor tempos and contemporary artists like Kaskade and deadmau5, attentions wandered to the various costumed antics across the dance floor.

Teebs picked up the tempo near the end of his show to recapture the audience, displaying a talent to produce within an array of sub-genres: jungle, trance, and hip-hop. 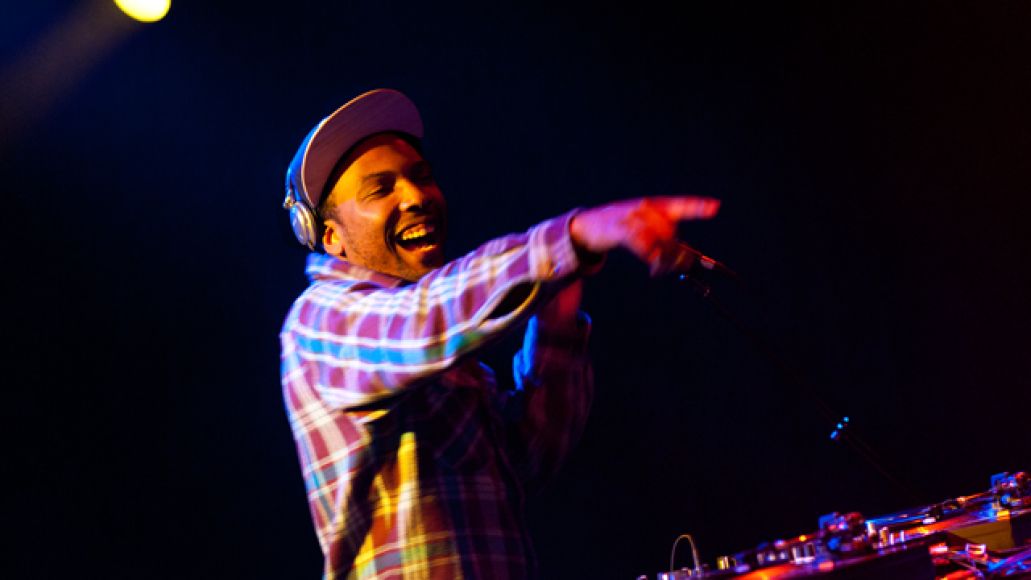 After a few minor difficulties, Teebs passed the deck over to 12th Planet. Co-founder of Smog Records, 12th Planet (John Dadzie) finally gave the growing crowd what it wanted: loud, grimey dubstep. And 12th Planet knew how to work the audience. I admire a CDJ who can admit to the lack of live skills needed; if you create a dope mix, step away from the tables and hype the crowd. No fake nob-turning needed!

The height of 12th Planet’s set merged two crowd favorites: dubstep and vampires. After hearing the introduction of “a vampire song everyone knows,” the crowd finally seemed to shake off the brisk October weather for “Youth Blood”. Audiences have a unique way of reacting to Americanized dubstep, a dance that could easily be recognized as a medical episode, but it’s overwhelmingly satisfying when performed to live, bass-heavy artists. 12th Planet also mixed in some club bangers among his signature dub tracks, which only served to settle the first few rows of dancers. He completed his set with his remix of Uffie ft. Pharrell “Add Suv”.

As Gaslamp Killer plugged in his laptop and cued up his late-evening set, attentions had already shifted away from 12th Planet. Watching GK deejay is similar to watching Animal play the drums: arms and hair flailing, unrelenting noise, and a pure enjoyment for creation and performance. When not jumping around the stage, GK is proficient on multiple platforms. He transitioned from vinyl, laptop, and digital turntable at a furious pace, cycling through samples more quickly than he could announce their origin. GK also introduced the audience to some brand-new equiment, the iPad. He utilized its touchscreen to pound out some glitchy, live break-beats. 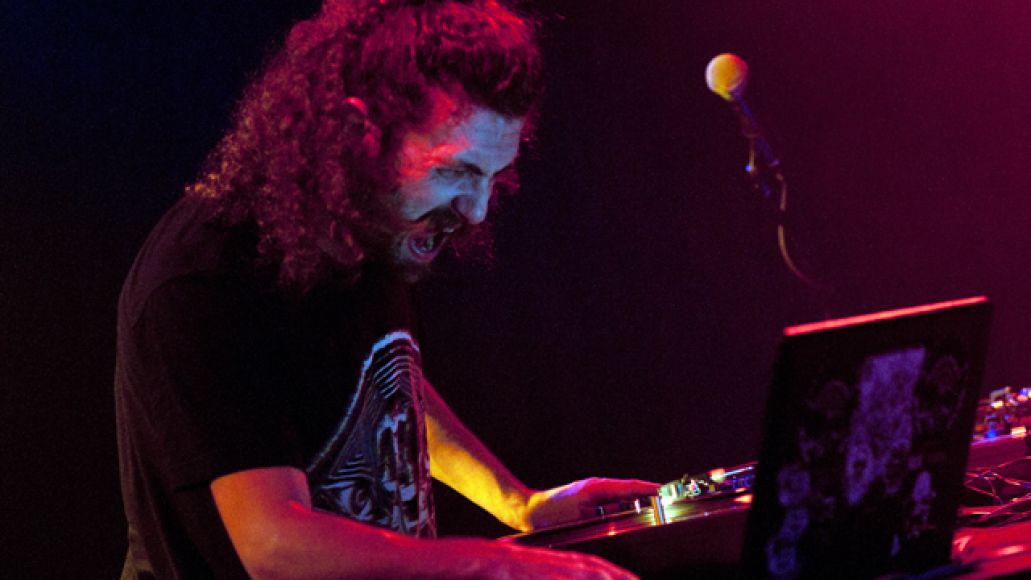 During the set, GK featured an 8-bit remix of Chamillionaire’s “Ridin Dirty”, “What’s your Fantasy” by Ludacris, Hudson Mohawke, Richie Hawton, J Dilla, and Jimi Hendrix. Gaslamp Killer finished the set, and possibly stole the show, with his beautifully beaten remix of Radiohead’s “Everything in its Right Place”.

Daedelus is like the Dr. Jekyll and Mr. Hyde of break-beat. Away from his gear he is a well-spoken champion of his music and artists. The dude has a vision of where electronic music is going and is vocal about its evolution. But then throw him and his four-piece suite onstage, and he is an audio monster. Unlike DJs that develop flowing soundscapes, Daedelus can be unrelentless. His complexity carries over with his setup, which consists of a laptop, Monome, and Max/MSP. During shows he “types” out the beats and samples on the Monome buttons, allowing for much more improvisation and flexibility than other techniques. Watching someone “type” onstage doesn’t seem like the most entertaining scene, but he does so with every bit of energy in his body, and on a night like Halloween, there were plenty of other sights lining the dancefloor.

Daedelus’ set began with some heavy west coast glitch that helped tie his set into those by Gaslamp Killer and 12th Planet. As the night grew late and the crowd began to thin, Daedelus brought down his BPM. Four consecutive hours of break-heavy electronic music can be a lot to digest for even the most experienced LA club-goer, so Daedelus brought his set to a conclusion with extended dark, ambient tracks. In an admirable move, Daedelus brought out opener Teebs as he remixed one of the up-and-comer’s new tracks.

Whether in reference to the music, artists, fans, or the multiple substances on the dance floor Friday night in Chicago, the show lived up to its billing of “Magical Properties”.

Taking a Breather with Daedelus in Chicago