Today’s live top-tier DJ/producer performances are no longer just a battle of beats, but of visual spectacle. Through fan expectation, professional rivalry, or a modest combination of both, sets have quickly evolved from a table full of gear, sweaty DJs, and back-screen visuals, to multi-level, multi-faceted, digital visual playgrounds. Daft Punk has their pyramid, Ã‰tienne de Crécy developed a cube, deadmau5 wears the mau5head, David Guetta’s now backed by two laser shooting robots, Richie Hawtin produces Plastikman’s minimal beats cloaked behind a 3-D screen, and now turntablist DJ Shadow is progressing the artfrom with his Shadowsphere.

From the onset, Pigeon John seemed like a strange choice for an opener. An LA-based underground rapper, who strangely resembles a hybrid of rapper Humpty Hump and actor Joey Slotnick, accompanied by two female backup dancers/vocalists, one of which who also controlled some live-production duties, didn’t seem to build on the same aesthetic as Shadow’s notorious live beat sessions. As the trio broke into their hour-long set, the similarities emerged: a diversity of sounds, and an appreciation for the fans and the performance. If you’ve never heard of the guy, just check out fan favorite “The Bomb” from the newest Volkswagen commercial. But John is far more than the track’s soulful lyrics. After starting off super hot, the set transitioned between “Hey You”, which seemed like it should originate from a party-rock band, not one of Southern Cali’s rappers, to the part-acoustic “Before We’re Gone.” As the trio explored their folksy side, fans found themselves swaying, mesmerized by the harmonies and uplifting beat. 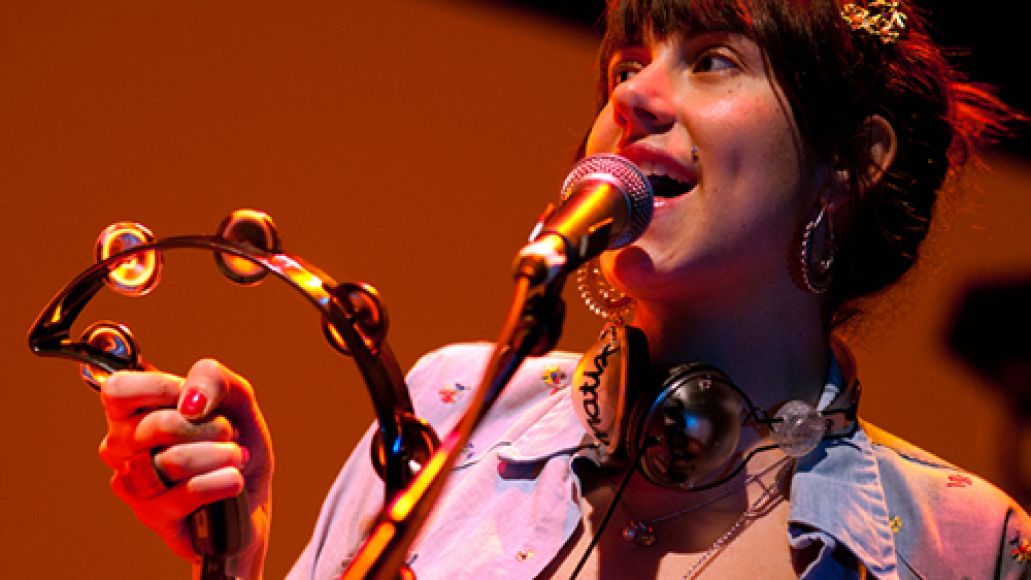 While John has a decent vocal range, clever songwriting ability, and enigmatic stage persona, the “band” is at their best when the ladies get a little more attention. They displayed all that had to offer with “So Gangster”, infusing three-part harmonies, old-school hip-hop, and a little dance hall, with sufficient bump-worthy low end. Their set concluded with “Excuse Me.” A biographic track about moving from Omaha, NE as a child, with a hook that seems to have borrowed some of the joy from Polyphonic Spree.

As the set concluded on a high note, fans were left waiting, some would say a little too long, for the Shadowsphere to be activated. While sitting in a prone position, just a massive sphere, mounted in front of a massive screen, doesn’t seem too ominous, but once Shadow provides the appropriate transmission, the sphere can become a near limitless amount of options when viewed against the scenes of the rear wall. Knowing this, you can imagine why a 30-min wait may seem to drag.

As Shadow emerged for the impending 2-hour onslaught, the sold-out crowd erupted. Before stepping into the capsule, he thanked the audience for spending their hard earned dollar on the show and supporting him 1,000 people strong. Not only has his live-setting changed since Endtroducing…., Private Press, and the MC heavy The Outsider, but also Shadow’s production style. Gone are the crates of vinyl and multi-textured samples of classic jazz, hip-hop, funk, and vocal rarities, replaced by digital turntables and beat machines – 90% of what Shadow performs live is now totally new and original. 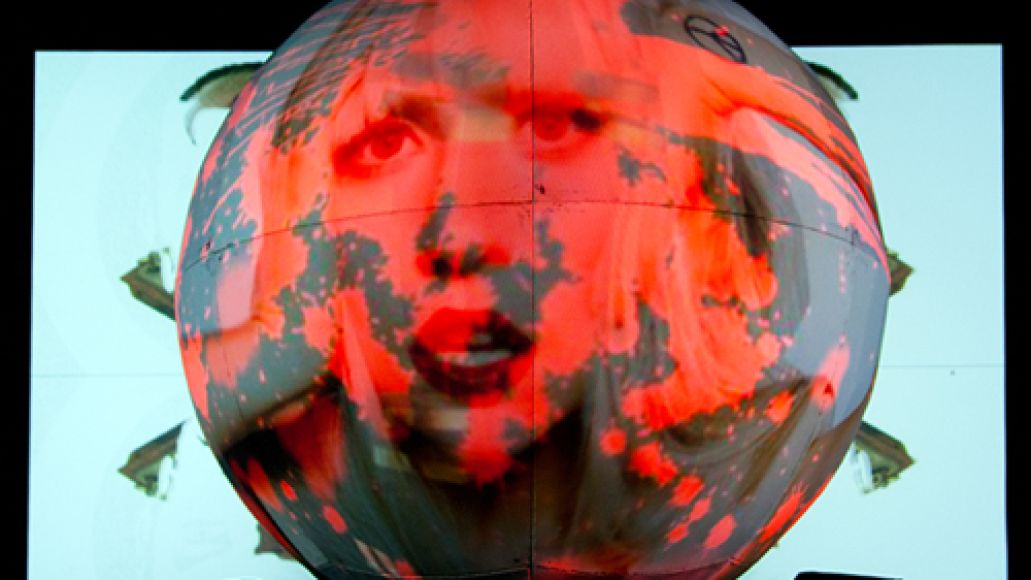 Favorites emerged for extended remixes: “Building Steam with Grain of Salt”, “Walkie Talkie”, “The Number Song”, “Best Foot Forward”. But the real surprise was Shadow’s uptick in his beats per minute. Shadow has always spun a variety of genres, but new single “Def Surround Us” and his new beats approach the speeds of jungle and drum & bass. About half-way through the set, Shadow rotated his sphere and addressed the audience about the new sound, “I don’t get radio play, but you guys always came out strong. Thanks for the support. With this tour, I just wanted to display that DJ’ing is a progressive artform. And it is all about what is being different. Hopefully you have gotten more than you wanted.”

Shadow then went into the new track “I Gotta Rock”. With synthesized guitar riffs, and the classic DJ Shadow bass, the track was electro-shoegaze; imagine DJ Shadow vs. My Bloody Valentine. As Shadow stayed confined in the 3-D sphere of images, motion, and curiosities, the set took on a hard trance like element uniting the audience in an orb of lights and sound; a feeling prompted by the facless figures covering the stage. 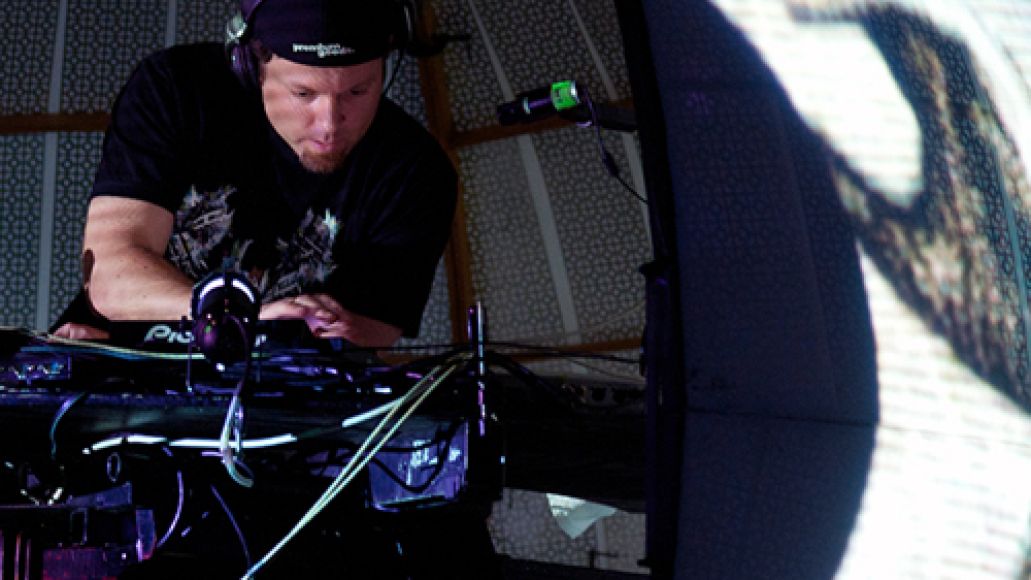 As Shadow stepped out for a short break around mid-night, enough fans cleared out to allow proper dancing space. The encore started with something “completely different”, a track based around a gospel hymn, and continued showcasing Shadow’s skills with hip-hop. First covering the stage with Q-Tip’s headshot as he reworked “Enuff” from The Outsider, then sampled Dead Prez’s lyrics from “Hip-Hop” over some heavy house before powering down the sphere.

To be honest, words aren’t enough accurately describe the event. Everyone showed up wanting to hear Shadow, but left mesmerized by what they saw. Check out the photos below courtesy of Brad Bretz. Two days ago a friend asked my favorite show of the year, it would be a different answer today.

The Shadowsphere touches down at Chicago's Park West (11/19)