In my mind The House of Blues is reserved for bands like Godsmack, Nickelback, and/or Kid Rock. It’s a schlocky venue that doesn’t have the best sound in the world, a motto of “In Rock We Trust”, and $11 – 24oz cans of Budweiser (one of their major sponsors). So the fact that Wolf Parade has played this venue the last two times they have been in Chicago (save for their appearance at Pitchfork), has been incredibly confusing to me. I’d even be fine with them playing The Metro (not my favorite sound-venue), I’d be super happy if they played Logan Auditorium like Wolf Parade off-shoot Sunset Rubdown has done the last two times, but HOB?

Regardless of the venue, I was still incredibly excited to see Wolf Parade live again. Wolf Parade has a live energy that is incredibly infectious and that gives their already urgent songs a new drive. The Onion‘s AV Club describes it best:

Spencer Krug has a child-like live energy that is in direct opposition to Dan Boeckner’s twitching and shaking rockstar style. Together, along with guitarist/noise-maker Dante DeCaro and drummer Arlen Thompson, they put on one of the best live shows I have seen. A show that, as The Onion describes, teeters on the verge of total unraveling, and tonight was no exception.

After the obligatory five-minute wait after the band members had checked everything, Wolf Parade strolled out on stage to a full House of Blues crowd. Boeckner walked up to the microphone and said, “Thank you guys so much for coming out. We’re Wolf Parade from Montreal, Canada,” before blasting into “Dear Sons and Daughters of Hungry Ghosts” from Apologies to the Queen Mary. The first thing I noticed about the band’s sound was how large it was on stage. On their albums, the songs have a lot of atmospheric sound to them, and translating that to the stage between four guys can be quite the task. Wolf Parade makes it work damn well, however. The four of them are able to create a huge, stadium-like sound on stage that gives the songs a massive urgency that is a damn joy to hear. They at times, such as during Queen Mary standout “This Heart’s on Fire”, sounded like fellow Canadians Arcade Fire. They had a space filling sound that was incredibly impressive and it shook the walls and floors. 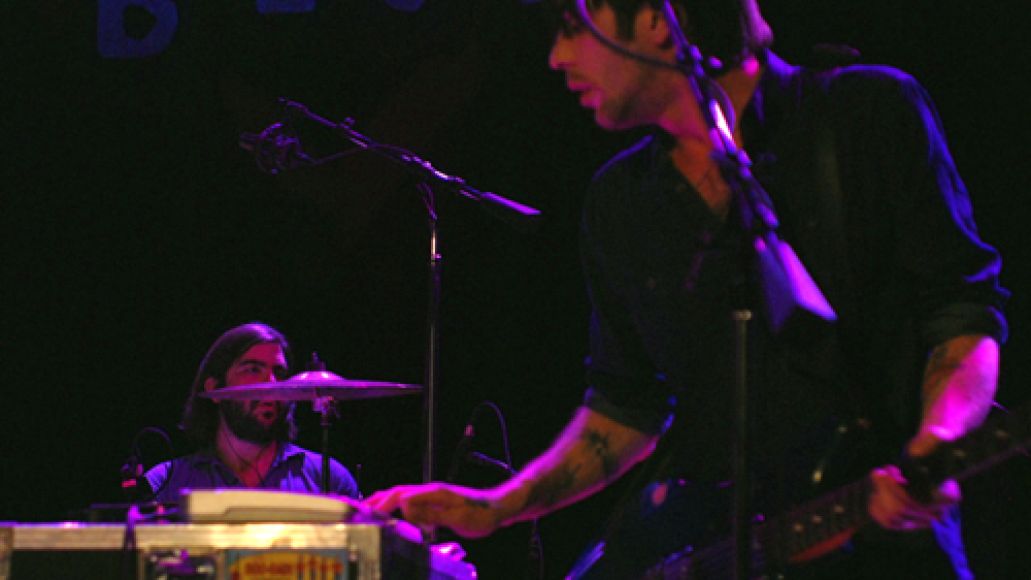 Then The Onion’s description came to complete fruition. About halfway through their set, somewhere around Expo 86 opener, and my personal favorite, “Cloud Shadow on the Mountain”, things started to get frantic. The next song, “Fine Young Cannibals”, ended with a complete switch in style rock out. Then progressively each song after the other started to get faster and faster. “I’ll Believe in Anything” (which by the way may be close to the greatest song ever written…I’m completely serious about that), and “This Heart’s on Fire” were played at near break neck pace. The former was one of the best and most passionate versions I have ever heard. You could see Arlen Thompson sweating and doing his best to keep up with Krug and Boeckner’s newfound energy. Then they closed the regular set with “Kissing the Beehive”. The nearly 11-minute jam is a common closer for them, and on this night it would be the culmination of the torrid pace the band had set. The song started out a little faster than normal, but once they got to the middle bridge where Krug sings the “fire in the hole!” bit, everything erupted and the most amazing noise began coming from all members on stage. It was fast. It was feedback. It was guitar squelches and keyboard yelps. It was amazing drum rolls and Dante DeCaro producing some of the most amazing sounds from his guitar I had heard all night. Once they finished the song all I could do was turn to fellow CoS’er Jeremy Larson and say, “Oh holy shit…” 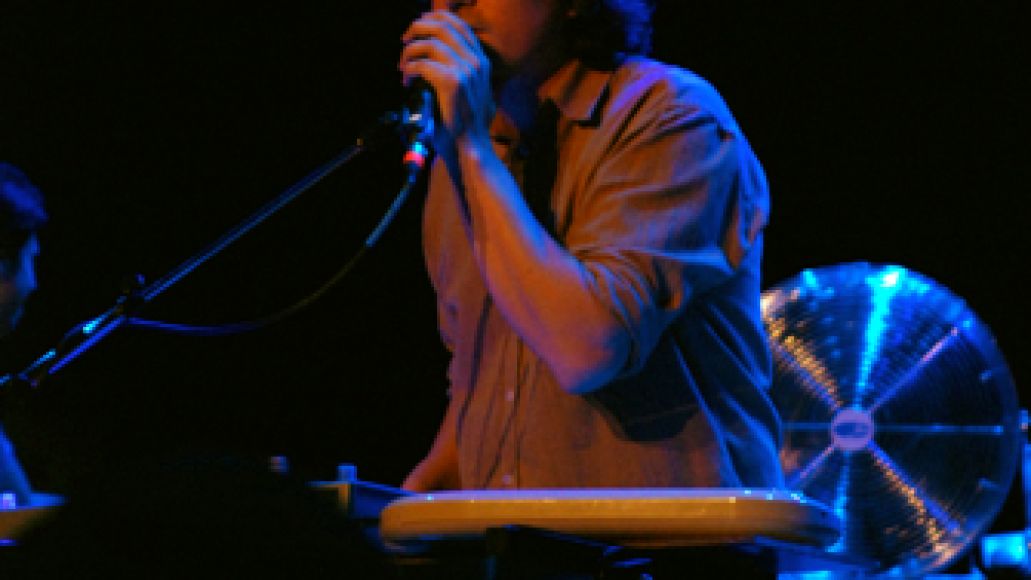 Oh, and they weren’t done yet. After a short break the band came out to play the encore with Ogre You Asshole bassist Norihito Hiraide in tow. He played bass for them on Expo 86 single, “Yulia”, which Spencer introduced by saying, “Nori has practiced this song with us exactly…two times. This should be good.” Then came the greatest moment of my evening. Nori walked off stage after the song, the band had a small conference around the drums, Krug walked back to the microphone and said, “Professionals. That’s what we are. Total professionals,” and then Thompson started the drumbeat to “You are a Runner and I am my Father’s Son”. That song is the reason I first fell in love with Wolf Parade back in 2005, and a song that I have been dreaming about hearing live but never have. The band picked up the fast pace of the main set and delivered an amazing version of the song. I could’ve have been happier. Once the song finished, the band said thanks and appeared to start to leave, but Krug started playing the intro to “Fancy Claps” instead. The rest of the band looked at each other, smiled, and launched into the song right on cue.

Wolf Parade is firmly cemented into the top live bands I should never ever miss, and this concert was a reaffirmation of that. The energy that they can bring to their songs on stage is unmatched. The reason I love Expo 86 so much is because they recorded it live. There were very few if any redubs. It was all live to tape and then vocals were added later. It’s about as close as they can come to capturing that live energy they produce. If they are playing anywhere near you, I can recommend to you enough to go see them. Even if you are just a so-so fan, you’ll become a full believer after you see them live. It’s a guarantee.

Setlist:
Dear Sons and Daughters of Hungry Ghosts
Soldier’s Grin
What Did My Lover Say? (It Always Had to Go This Way)
Ghost Pressure
Cloud Shadow on the Mountain
Fine Young Cannibals
Semi-Precious Stone
Palm Road
I’ll Believe in Anything
This Heart’s on Fire
Kissing the Beehive
Yulia (ft. Nori of Ogre You Asshole)
You Are a Runner and I Am My Father’s Son
Fancy Claps