After watching the video to David Bowie and Mick Jagger’s “Dancing in the Street” for probably the hundredth time in its quarter century of existence, all I can ask myself is how can two people as eternally cool as these two come up with something so embarrassing? Is their Martha and the Vandellas cover a a sign of the times, and in this case a relic of the coked-out decadent excess of the 80’s? Am I being elitist for singling out a light-hearted guilty pleasure charity single? Hopefully not, because what has continued to evade me all these years is sorting out what exactly are they going for in this video.

“Dancing in the Street” opens with alternating flashes of a brick wall and close-up footage of yellow Reebok’s stomping faster and faster, set to lyrics new to this bloated pop-rock reinvention of a soul classic: a list of countries, continents, and Tokyo. It turns out that those highlighter-colored sneakers belong to Mick Jagger, and he swings onto screen to show he’s still got some impressive dance moves. For some reason, when Jagger struts his stuff on-stage, it’s part of his legend: it’s one of his defining traits that made him so revered in the first place. But here, it’s cheesy at best and uncomfortable at worst. Perhaps it’s because the cover sounds more dated than the original, or maybe it’s that shoulder-padded green silk shirt straight from the racks of The Limited, but something just feels inherently wrong. 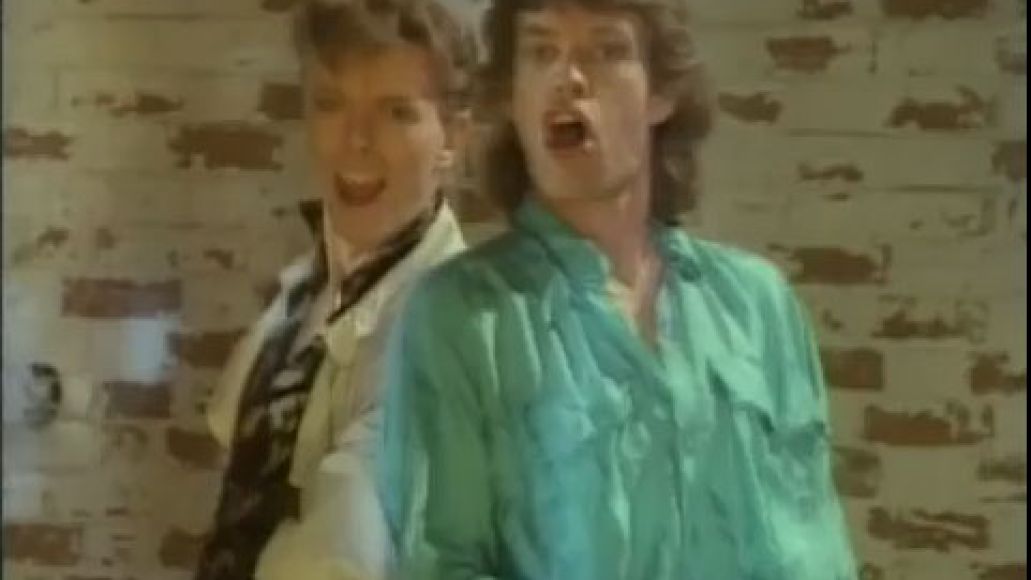 David Bowie soon makes one hell of an entrance, and by that, I mean it’s gone all to hell. Leopard print jumpsuit aside, skipping straight to his slow motion leap into the scene would have had more of an impact. After this missed opportunity, Bowie and Jagger take it outside, and for two more minutes they twist and shout the night away. Instead of two rock gods having a laugh, what unfolds in “Dancing in the Street” is more like two dads on a rare night on the town after one beer too many. Is it just my imagination or did Bowie’s trench-coated dark alley dance later go on to be adopted by none other than Rick Astley in, yes, that video which must not be named? The simultaneous butt-wiggle at the end confirms that they are definitely in on the gag, except the joke here seems to be bigger, and more hilarious, than ever intended.

Break Yo TV: David Bowie and Mick Jagger  Dancing in the Street