Dan Bejar has been producing records under the Destroyer moniker for the better part of the past decade and a half. When he’s not resurrecting his role as a fringe member of the New Pornographers, he’s generally at work on some new collection through which he’ll further convey his complex ideas on love or at least his refutation of the world’s simplistic understanding of love. His lyrics are spiteful yet enchanted, discouraged yet awestruck, riddled with pop-culture references and garnished with dozens of assorted female names. He usually sings them in his nasally, Bowie-infused snarl, occasionally rattling his dense words off in a quick-fire succession over a flurry of layered guitars (both electric and acoustic) in accordance with some multi-dimensional, intermittently jaunty song structure.

With Kaputt, a record whose name reflects a strange sense of culmination or conclusion (though he’s admitted it’s a reference to a book he’s never read by Italian author Curzio Malaparte), a lot of the ideas Bejar’s only toyed with in the past — left in the periphery of what Destroyer was really all about — are propelled to the forefront in such a fresh manner that it feels like the beginning of a completely new stylistic saga for Bejar’s solo vehicle. No jaunts are to be found here. Instead, it’s that sort of “The Certain Things You Oughta Know” dreamy ’80s synth-wash that dominates the record. In fact, the album is so cohesive in its ’80s-possessed instrumentation that, on first listen, you’d think Bejar had made some fatal mistake. But that assumption would be a mistake in and of itself. It’s not as simple as stating that Kaputt is just Bejar transposing his lyrical wit and writing approach onto the swashy textures of the 1980s. While the ’80s pastiche seems to be growing exceedingly popular in the realm of independent rock, Bejar appears to have carved out a specific purpose for his stylistic decisions and gorgeously so. He’s not merely jumping aboard the trend train.

Combined with periodic, smooth jazz saxophone lines, coolly fluttering flute, acid jazz explorations, and mechanized hallway drumbeats, Kaputt sounds jarringly beautiful in its makeup. Adopting some of the era’s most passé, even laughable elements, Bejar turns these low-culture signifiers into a vehicle for expressing a sense of warped nostalgia. With a mournful, almost depressingly ’80s palette, his drowsy vocals find themselves enveloped by their overpowering soundscapes. These dreamy, outdated textures do more than just ornament Bejar’s typical songwriting style. In so many ways, the textures and instrumental decisions are themselves the songs — wordless lyrics that help drive the narratives to full realization.

Many of these backdrops appear to possess lives of their own, floating around aimlessly with no lead instrument and no commanding melody. Saxophones wander in layers, crunchy guitar lines battle it out with thumping bass, ethereal swells, disco pulsating rhythms, and palm-muted electric guitar. It’s almost as if Bejar has slipped into a deep, dream-filled sleep. In this dream, he’s in a conflicted conversation with the ’80s aesthetic, confronted by the emotionally devoid, simple, and idealistic sounds of a bygone era. But through some twisted inner conflict, he longs for a world where these sounds aren’t scoffed at.  Lucky for him, he’s created that very world in the process. There he appears to toy with the concept of why some art is deemed “high” and some “low.” In it, Kenny G runs amuck with Roy Ayers as pan flutes dance around surroundings that could pass for Lionel Ritchie castaways. It gets bright when it needs to but dark and eerie at nighttime. And the night is long. With this powerful playground at his disposal, Bejar can focus his lyrics on complimentary matters, allowing the instrumentation to do a lot of the mood work.

Lyrically and energy-wise, Bejar is not excited here. His voice never gets worked up, and he barely even dada nana nana nanaa’s, the minimalist scatting only found in a muted state on “Savage Night at the Opera”(if you’re not familiar with Bejar, my apologies). Instead, he’s endearingly lackadaisical, defeated, and half-asleep as he drifts along with the textures, whispering his philosophies into the ether. Then there’s the inclusion of female backing vocals, which help add some sweetness to the air. She piggybacks key lines of poetry and provides some solidity amidst the heavy atmospherics.

Thematically, Bejar’s still hung up on similar issues. For one, there are the women: Ava, Jessica, Mary-Jane, Nancy, and Christine make appearances on the lyrics sheet. He’s also still infatuated with referencing pop-culture, even more so here, alluding to iconic wordplay and imagery both lyrically and instrumentally. Within the first two tracks, we get a Beatles and New Order reference: “Your first love’s new order, mother nature’s son.” “Why does everybody sing along when we built this city on Ruins,” he wonders in tongue-in-cheek reference to Starship’s “We Built This City”. And even when he’s not cross-referencing with lame ’80s pop songs, cities also seem to be an important theme on Kaputt. “Chinatown” and “Downtown” fill the record with some post-apocalyptic imagery of cities drowning in their vastness. “Jessica’s gone on vacation on the dark side of town forever,” he laments on “Song for America”.

Then there’s the negative self-awareness of his role as songwriter that populates much of the record. Bejar finds himself at odds with his own profession, figuring out the purpose of his own art. “I write poetry for myself,” he exclaims on “Blue Eyes”, as if defending himself against those who might argue otherwise. He continues, “I sent a message in a bottle to the press/ It said don’t be ashamed or disgusted with yourselves.”  He goes on to adopt the role of apathetic critic on “Savage Night at the Opera”. “I heard your record, it’s alright,” he states in a matter-of-fact slur. Then he talks about songwriting itself. “I wrote a song for America/ They told me it was clever,” he mumbles on the set’s title track before resurrecting the thought for an entire song on “Song for America”.

Combined with the aforementioned, completely entrancing instrumentation, these lyrics paint a clear picture of a world in an apocalyptic conflict, both physical and philosophical, the ’80s aesthetic crashing down on all that Destroyer used to be and all that it could become in the near future. Bejar’s crazed inner turmoil shines clearly on every track. In the wake of guitar-based art-pop, he’s thrown it all away and invited in a vast array of unified new sounds, nearly, but no doubt purposefully, losing sight of the very groundwork he’s built his career on — cogitating the point of it all until it’s, well … kaput.

Kaputt is the sort of record that arrives only once in a while: an expansive world that captivates you from beginning to end, impresses you with its self-awareness and cohesiveness, then releases you from its grasp when it’s all over.  The trick here is that, though you want to stick around, it doesn’t need you. It’s got its own agenda. The record is so fully realized and perfected that it doesn’t seem eager for your approval. Your validation is the least of its worries, though it’s filled with qualms. For all it cares, you could hate it. You could loathe it for its intense understanding of itself. You could despise its experimental leanings. You could shrug it off and move onto something else, the next record on your list.  But that wouldn’t matter, and you probably won’t. It knows that, too.

Pick up a copy of Kaputt here… 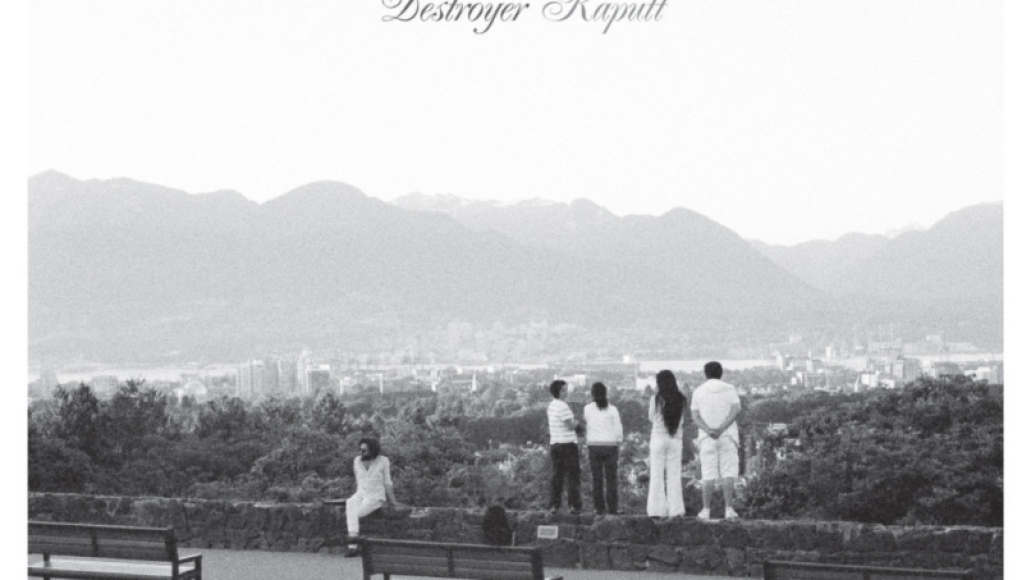 Destroyer's Kaputt Paints a Clear Picture of Both a World and Project in Apocalyptic Conflict: Review