If there’s anything to take away from Weezer‘s Memories Tour (or The Blinkerton Tour), it’s that memories hurt. Well, that and something we’d like to coin “restless frontman syndrome”, but more on that later. Instead, think about the concept of memories, at least for a second. They’re nothing but fleeting images we return to time and time again. They come and go like fads on MTV. They make us feel warm, but only momentarily, simply because we’re always left with the cold, stark realization that they’re a part of our past – a place we can’t revisit. Somehow, though, singer-songwriter Rivers Cuomo has defied this avenue of science.

In addition to his countless on-stage toys, some of which include a soccer ball, toilet paper, and a trampoline, Cuomo also has a “time machine.” At Chicago’s sold-out Aragon Ballroom this past weekend, he used it. Calling out different dates and albums, the manic frontman, who more or less mimicked a Muppet on mescaline (at least on Friday), scaled back through his band’s crooked discography. “2005! Make Believe,” he announced, shortly before the band pummeled into “Beverly Hills” (Friday) or “Perfect Situation” (Saturday). Naturally, the “time machine” would end up at the night’s celebrated album.

Over the past five years, Weezer’s been plagued by critics and fans alike. There are those who adore their first two albums, the others who pick and choose from the lot, and, of course, the principal fanbase that just eats it all up. Supporting their latest offering, last year’s respectable Hurley, the band has chosen to ignore 90% of the record and instead focus on its sole single (“Memories”) and the band’s recently reissued classic, Pinkerton*. Critically and commercially this is a smart choice, and it worked, at least if their weekend in Chicago is any indication, because the wide-open venue that the Aragon typically offers felt horribly cramped, mildly chaotic, and a tad stuffy. 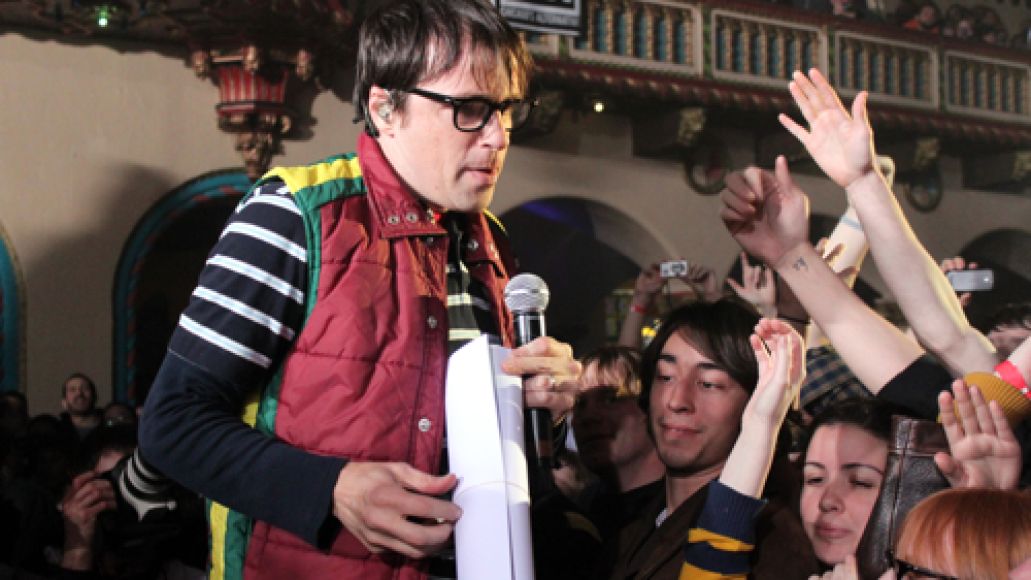 Everyone joined in the nostalgia. Faded Weezer shirts mixed with fresh ones. Thirtysomethings shared stories with nubile teenagers. What’s more, as if to boldly underline the theme for those who just didn’t get it, sponsor State Farm provided photo booth opportunities in the venue’s lobby, where they handed out faux plastic Cuomo glasses to adoring fans. Creepy or not, this in turn led to an army of Cuomo fanatics, who sang in unison, shared beers with one another, and snapped hundreds of photos with their smart phones. Actually, it was something straight out of a Weezer video. 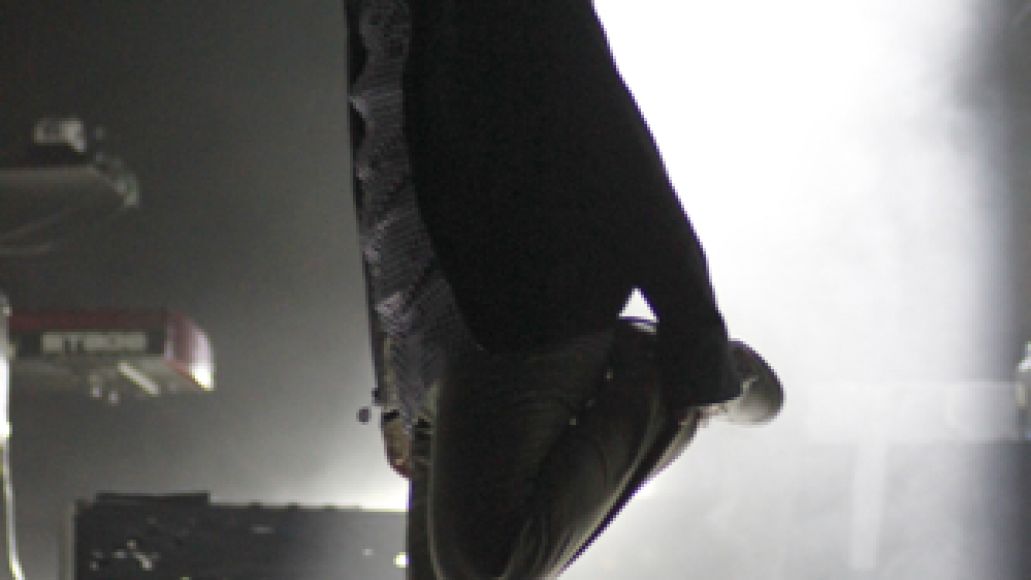 Each night carried out like an opera designed specifically for the ADHD generation, complete with an intermission, which featured adorable performances by the School of Rock and a slideshow-gone-too-long by longtime friend Karl Koch. For the night’s first set, Weezer rolled out beefed-up renditions of its post-Blinkerton hits. This mostly saw Cuomo running maniacally through the venue, while band members like guitarist Brian Bell or drummer Pat Wilson sung his verses and choruses. This isn’t anything new. If you caught them on 2009’s Raditude tour, these same antics carried throughout the entire set. In fact, Wilson hardly even played drums, as he filled in for Cuomo’s guitar parts. Here’s where the term “restless frontman syndrome” comes in.

Blame it on self-imposed pressure by fans or just boredom, but this concept is something that’s come to fruition lately. It started with Green Day, when Billie Joe Armstrong paraded about the stage with younger fans in a then-charming sing-a-long. Nowadays, it’s bled into every other song and become rather irritating. For Weezer, Cuomo has slowly abandoned his post at the microphone and guitar, becoming instead this erratic, unpredictable prankster. It’s funny, sure, but it’s also unnecessary. The only thing it says to their fans is that they feel their music needs to take a backseat to gags and gimmicks.

Admittedly, the second night fared better than the first. Maybe it was the album (Pinkerton), but Cuomo came off reserved and focused. He also doled out a setlist that could make any fan’s heart explode. As opposed to the staples on Friday night (“Troublemaker”, “Island in the Sun”, “Buddy Holly”), the band surprised everyone with B-sides galore (“You Gave Your Love to Me Softly”, “Susanne”, and “Jamie”), all performed with the guts of a band loving their music. This sort of– call it authenticity– surfaced on the first night, but it didn’t ring as unique considering you’re apt to find the majority of the album’s songs on any given night, anyhow. That being said, something did spark in the band during a reverb-soaked rendition of “Only in Dreams”, enough that they revisited it on the second night, yanking back all the distortion and feedback, all of which would inevitably carry over into Pinkerton‘s finest tracks (e.g.”Getchoo”, “Across the Sea”, or “No Other One”). For what it’s worth, Saturday was one of the better sets the Aragon has seen in quite some time – sonically, speaking.

To drive a point home, though, when the band reached “The Good Life”, arguably the highlight of both nights, people freaked out. Fans crawled over one another, beer made a voyage towards the ceiling, and several others beat at their hearts during the song’s anthem-like chorus. Where was Cuomo? Behind his guitar, sweat dripping off his forehead as he embraced each and every lyric with vintage austerity. 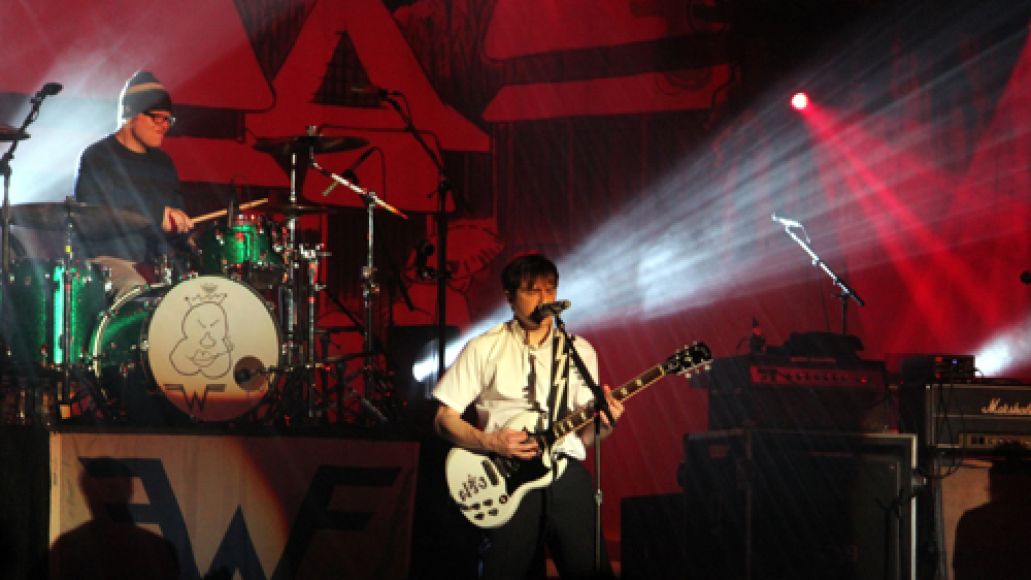 Substance goes a long way. Taking the tour’s theme into consideration, it’s the subtle, more incisive moments that are likely to stay with us. It’s hard to argue that Cuomo doesn’t celebrate his music. Oh, he does. But, there’s a difference between embracing what you have and celebrating it. He shouldn’t have to relegate himself to sideshow antics and tomfoolery. If he’s doing it for the fans, he doesn’t need to, as he proved in the second half of each night. However, if he’s just bored…well, that’s a whole different problem, altogether. Regardless, as we discussed before, memories come and go. Cuomo doesn’t have a time machine and it’s more than likely we’ll witness Crazy Cuomo for a couple years ahead. Still, if the band opts for more varied, unique setlists at each show, similar to that of Saturday’s, it’s likely we’ll have a few more memories to come. Just leave the toilet paper in the stall, Cuomo.

* – How is it that Pinkerton was originally critically and commercially panned? As Koch pointed out on Saturday night, Rolling Stone once listed it as the worst album of 1996. How? It’s not overtly experimental. It’s not esoteric. It’s not even remotely bizarre for the era, either. If people managed to swallow Nirvana’s In Utero, it makes no sense why this album wasn’t hugged and kissed and stowed away safely underneath every alt. rocker’s pillow at night. Right? ANYWAY, this little nugget just seemed baffling, but blame it on hindsight.

Setlist – Friday – Weezer (Blue Album):
Memories
(If You’re Wondering if I Want You To) I Want You To
Troublemaker
Pork & Beans
Beverly Hills
Keep on Fishin’
Photograph
Island in the Sun
Hash Pipe
Falling for You
Don’t Let Go (w/ School of Rock)
El Scorcho (w/ School of Rock)
My Name is Jonas
No One Else
The World Has Turned and Left Me Here
Buddy Holly
Undone (The Sweater Song)
Surf Wax America
Say It Ain’t So
In the Garage
Holiday
Only in Dreams

Setlist – Saturday – Pinkerton:
Memories
Pork & Beans
The Greatest Man That Ever Lived (Variations on a Shaker Hymn)
Perfect Situation
Dope Nose
Hash Pipe
You Gave Your Love to Me Softly
Susanne
Jamie
Only in Dreams
Surf Wax America (w/ School of Rock)
Say It Ain’t So (w/ School of Rock)
Tired of Sex
Getchoo
No Other One
Why Bother
Across the Sea
The Good Life
El Scorcho
Pink Triangle
Falling for You
Butterfly
——