White Lies have it rough: people take them far too seriously. Nearly every negative critique of the band paints them out to be dour, joyless guys but no one could possibly write and sing a song as memorable as “To Lose My Life” around a surprisingly infectious chorus of “Let’s grow old together and die at the same time” without a sense of humor. While it is true that the London trio don’t quite possess the lyrical prowess of Interpol’s Paul Smith, burst on to the indie scene long after the Editors/Killers/Arctic Monkeys/Franz Ferdinand did and don’t come anywhere near Joy Division’s bleak atmospheric perfection, most people who draw the aforementioned comparisons clearly haven’t heard much beyond frontman Harry McVeigh’s heavy baritone and the dim black-and-white color scheme of the band’s press photos. They’ve also missed a factor that’s integral to the band’s music: the paradox between the grandeur of White Lies’ fist-pumping anthems and the dramaticism of their tales of lost love are bridged by an undeniable pop sensibility that set them far apart from their peers.

Their successful 2009 debut To Lose My Life was bursting at its seams with huge choruses and wonderfully gloomy love songs and its follow-up, the just released Ritual, continues down that path with a ambitious set of synth-flecked arena-worthy anthems co-produced by the legendary Alan Moulder (Nine Inch Nails, the Smashing Pumpkins, the Killers). While many who took issue to the theatrical melancholy of their first record won’t exactly fall for Ritual, fans of the band will appreciate their evolution past some of the tired comparisons to their post-punk predecessors and contemporaries. And after witnessing the undeniably awesome live show the trio delivered to a packed house of 500 at one of Los Angeles’ best venues last night, it’s safe to say that the band is well on their way to great things. 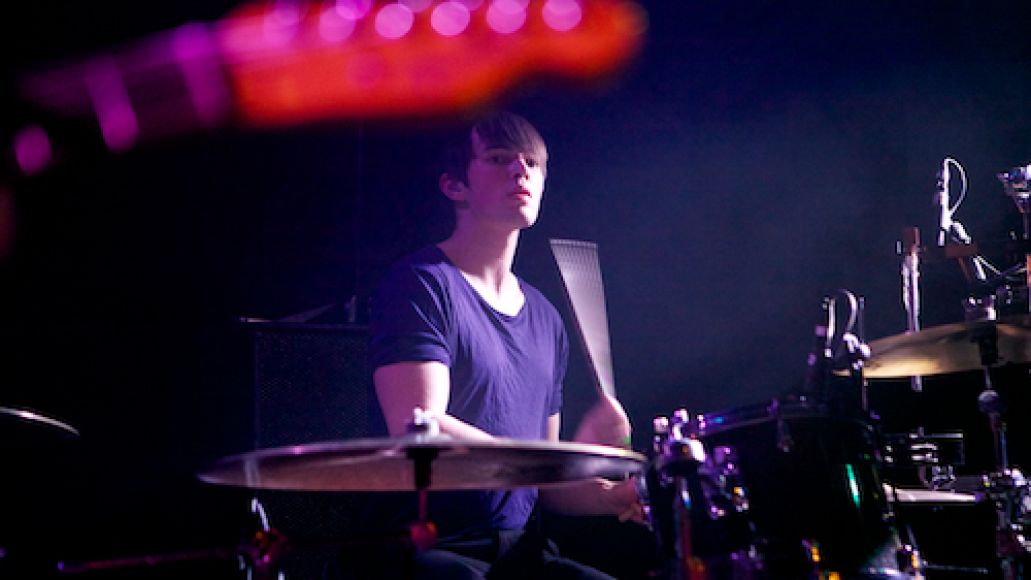 While waiting for the crowd to file in and get settled, the trio blasted the Troubadour with a little DJ set of sorts from the sound booth, playing their choice of spacey dubstep and drum ‘n’ bass. Opening act Giant Drag took the stage on time and introduced themselves but looked very uncomfortable right from the start. Singer/guitarist Annie Hardy’s uneasy dark humor and the band’s grungy songs didn’t go over well with the crowd, most of whom seemed anxious to see White Lies’ synth-pop. While they did throw in an interesting cover of Chris Isaak‘s “Wicked Game” (introduced by Hardy as a song she wrote when she was eight) and the fuzzed-out “My Dick Sux”, which featured a ton of feedback courtesy of recently added third member Dakota Floeter, the band was clearly on an off night. Aside from watching drummer/synth-man Micah Calabrese coolly take on the daunting task of playing the bass parts of the band’s songs on a Roland synth with one hand while pounding out the drum parts with the other, Giant Drag’s nine song set was—for the most part—a giant drag.

White Lies finally took the stage right around 10, opening with To Lose My Life‘s “A Place to Hide”, to raucous applause. Thanking the crowd and introducing themselves, they moved slickly into the new “Holy Ghost”, whose chorus’ smokey keys and moody atmospherics. While on record, the awkward chorus of “Maybe some day I could move like you/maybe some day I could scream like you” rings a bit hollow and a strange vocoded outro the song stretches at least a minute too long, the band’s tense delivery made “Holy Ghost” was one of the night’s highlights. Bassist Charles Cave kept the groove magnificently, seamlessly adding in synth-lines here and there, as he did on the New Wave-y intro to “Streetlights”. For the Ritual tour, White Lies expanded their lineup with the addition of an extra guitarist and keyboardist, filling out their sound a whole lot and allowing McVeigh to take dramatic pauses without interrupting the music’s flow, as it often did on their last stateside tour. 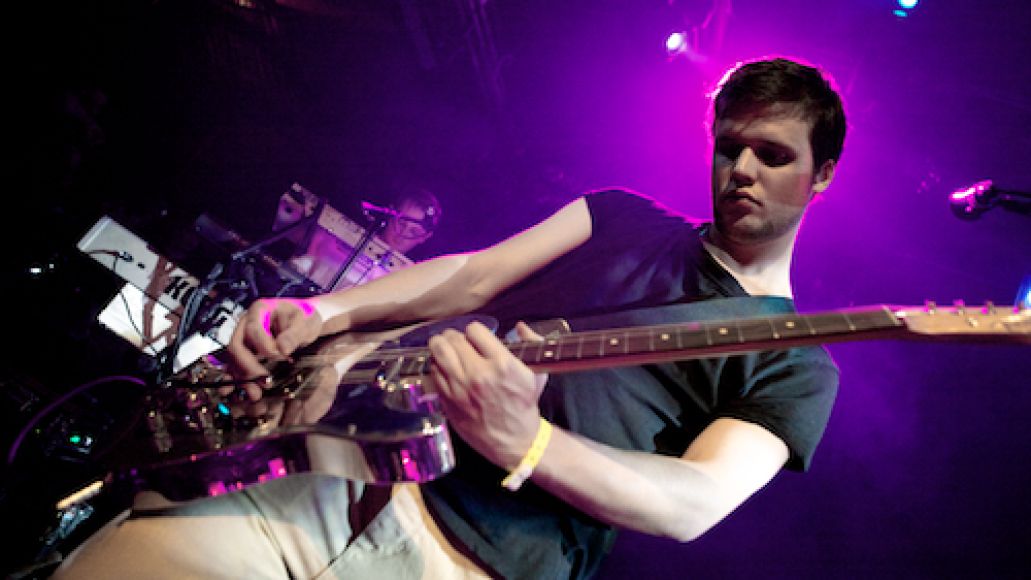 While I had my doubts about how the new, more electronic material would translate on stage, the band delivered magnificently, capturing the grandeur of their songs, both new and old, while glossing over most of Ritual‘s dimmer points. Their at-times ridiculous lyrics seem to take on new life in their live form, turning into soaring choruses or edgy verses. Grins exchanged by the guys between songs betray a sense of humor that many critics somehow don’t manage to catch on to. It was hard to miss, for instance, the wide smirk on frontman Harry McVeigh’s face while he sang the particularly absurb chorus of “Bad Love” (“If I’m guilty of anything, it’s loving you too much/Honey, sometimes love means getting a little rough.”)

The band kept their onstage banter to a bare minimum, keeping the music going without any hitches at all. Drummer Jack Lawrence-Brown appeared positively expressionless for the length of White Lies’ set, silently thrashing at his drum kit, occasionally switching over to a set of electric drums on a few of the newer songs. White Lies played a brave mix of material from both albums, slightly favoring Ritual (which was only just released last week) over their older record; a choice that worked to surprising effect. If the mark of a great live band is their ability to captivate a crowd that’s unfamiliar with what they’re playing, White Lies did a fantastic job at the Troubadour. When they finally got around to playing fan-favorites “Death” and “Farewell to the Fairground”, the crowd responded with wild cheers and applause. After a massive crowd sing-along at the end of set closer “Bigger than Us”, the band said their goodbyes and promised to be back soon. And after a set like that, it’s pretty safe to say they won’t play a venue as intimate as the Troubadour the next time they’re in town.