Have you ever seen David Lynch’s Twin Peaks? It didn’t last long — only two seasons, unfortunately — but it’s retained quite an immaculate cult following … and understandably so. There’s something jarringly inviting about the quaint mountain town that experiences abnormal instances. There’s the everyman Sheriff, the dopey Deputy, the country slang, the damn good coffee, the lush Pacific Northwest landscapes, and then there’s the death of the town princess by what may or may not be extraterrestrial or supernatural forces — if not both. It all looks normal at first sight, but behind every tree and within every mirror dwell incomprehensible beings, all with the agenda to distort reality. As the show progresses, the more natural and human elements that once acted as common ground start feeling rather loose and slippery. Characters change face, confusion runs rampant, bodies start piling up, and everything takes on this rather cryptic nature. Sound familiar?

Film critics love to throw around the word “Lynchian” to describe genre films that borrow a few of those elements. These pieces shift dramatically in tone, and rather abruptly so, too. There’s this dreamlike quality to them that baits its audience, and it’s been programmed that way. There’s a specific reasoning for every image, every sound, and every action. Or, is there? That’s the game. Not to throw around labels too much, but Thom Yorke’s style tends to be very Lynchian. He teases his fanbase with cryptic clues, whether it’s a reference to past lyrics or sentence fragments that start an impromptu scavenger hunt (that usually lead nowhere, anyhow), only to turn the wheel unexpectedly. If we’re to analyze the musical landscapes he creates, they typically start grounded and work their way out into abnormal terrain that we’re, more often than not, left to discover on our own. Or, it’s just vice versa. These compositions beg to be analyzed, scoured, and processed. They’re cult-like in nature, but only because there always seems to be some deeper implicit meaning. It’s a mythos, essentially. It’s why Radiohead remain one of the most powerful bands on this clusterfuck of a planet. Well, that and because they happen to be extraordinary musicians, too.

On The King of Limbs, the group’s already highly celebrated eighth studio album (it’s only been three days, by the way), Yorke continues his formidable hijinks, kicking off what will undoubtedly be another decade blistered with lyrical mazes, influential instrumentation, and critical gift baskets. Now, a preface before we go forward. This isn’t anything new for the band. They’ve been playing these games since the ’90s. (What exactly does the man say at the end in “Just”? What? What?) It’s only now, in an age where communication is instantaneous, abundant, and at times superfluous, that the games have really just begun. Ever since they shocked the music industry by releasing 2007’s In Rainbows in a pay-what-you-want online sale, everyone, fans or not, have come to believe that “anything can happen with these guys.” It’s true.

But, you have to merit such actions. You can’t spin populations without probable cause. You need to deliver. Any hack could attempt to make their own version of Mulholland Drive (oh, they have), but most of them just fall flat on their face (that’s happened, too). It’s not just about the games; it’s about what’s on the other end. Radiohead carry an incredible resume. Each of the band’s records are remarkably hard to argue against — even 1993’s Pablo Honey, still an incredibly underrated effort; it’s essentially ’90s alt-rock bliss, people — and for that they can continue to post obscure paintings, tweet Japanese locales, and make vague, ominous “prophecies” that fans can hope and pray come true. It’s all deserved.

Okay, so how do they still fare? With The King of Limbs, reasonably well. Let’s focus on the format, shall we? At just eight tracks long, the whole effort feels less like an LP and almost like an adrenaline-charged EP — at least by Radiohead’s standards. The songs aren’t even necessarily lengthy, either. Its entirety is under 40 minutes, and the longest song clocks in at 5:20. Certainly disheartening to its devoted fanbase, but then again, they treat clips on YouTube like nuggets of gold. It’s musically where things get tricky … for everyone, really.

On first listen, the most obvious question is, “Where’s the band?” If you recall, their last effort, In Rainbows, packed a punch that hit the heart again and again. Although short, too, with 10 tracks, it left little room to complain; instead, it assumed an authority about itself: It knew what it wanted to be, and it arrived concise and distinguishable. What’s more, it humanized the band. It felt like five people in a room, crafting their best work and honing in on their talents for, what, their sixth time? Maybe their seventh, depending on how devoted to each album you are. With The King of Limbs, it’s still alluring, but something’s changed.

It’s the unity. It’s just not there. Sometimes with a band that’s incredibly versatile and yet personable — you know, like Radiohead — you might hear folks say, “Oh, this is definitely a so and so’s record.” These conversations usually happen with The Beatles. If we’re to use that old adage, then this is definitely Thom Yorke’s show here. In fact, it takes quite some digging to find, say, Jonny Greenwood or Phil Selway and especially Ed O’Brien. Colin, too, if you’re that fan. There’s the street corner drumming on “Bloom”, but eventually it just dwindles into this dully electronic sound. Then there’s the light, very “Bulletproof…”-esque guitar flairs on “Give Up the Ghost”, but that could be Yorke, too. That’s not to say his focus is a detriment, but it’s somewhat problematic when he’s done his own thing, and it sounds oddly similar to what we have here.

Every Radiohead Album Ranked From Worst to Best

For example, there’s little separating solo cuts like “Black Swan” or more recently “Hearing Damage” from the trip-hop sensibilities that litter Limbs tracks like erratic nail-biter “Feral” or the graceful-yet-empowering “Lotus Flower”, the latter tune even more of a head-scratcher due to the fact that Yorke originally performed it with Atoms for Peace. He’s just so center stage in all of this that it becomes rather damning and almost, dare we say, cryptically bothersome. It also offers for little variation; in fact, few songs here feel as singular as any of the group’s previous efforts. The very orchestral “Bloom”, for instance, hints at the few genres they’re dabbling with — specifically that dubstep minimalism, no doubt influenced by Yorke’s time spent with Flying Lotus — and it eventually explodes into a blistering aural storm that later subsides into what sounds like an afternoon rain shower. It’s beautiful, but immediately replicated with “Morning Mr Magpie”, which becomes another exercise in repetition, only far more static and less intrinsic. Having collected dust in the band’s archives for years, the track sounds remarkably different than what Yorke premiered during a webcast back in 2002. What started as an acoustic crooner has since evolved into something indistinguishable; the engulfing instrumentation, the roaming pace, and Yorke’s satellite harmonies all, ironically, feel vacuous and nearly nauseating. When Yorke coos, “They’ve stolen all my magic/ And took my melody,” he’s not lying. Truth is, nobody’s taken his magic here; they’ve just relied on it too much.

Though given the album’s title, a reference to a 1,000-year-old oak tree in Wiltshire’s Savernake Forest, which was three miles away from where they laid down tracks for In Rainbows, it’s apparent they haven’t abandoned that era just yet. Some of the songs prove this. You can’t listen to “Little by Little” and not help but picture the band all together, somewhere in a dark Liverpool basement lounge, with Yorke preferably dancing in black leotard amidst cigarette smoke and Euro hipsters. The more humane elements continue. “Codex” complements the lone emotional aspects of previous album closer “Videotape”. When Yorke wails, “No one around,” it’s odd because it’s one of the few moments here where he doesn’t feel alone, even despite the lonely nature of the track. Jonny Greenwood surrounds him with horns and strings, a subtle orchestration that makes you think twice about the other tracks on the record. The same goes for “Separator” (formerly “Mouse, Bird, Dog”), which slowly ropes in each instrument as it builds and climbs into a powerful closer, not unlike what fans originally pegged “Videotape” to be. For Jonny enthusiasts, this one should be on repeat, although altogether, these three should stick out immediately.

There’s one last thing to consider here, though. For the entirety of the band’s career, they’ve set out to shatter expectations and go one step higher. Perhaps they’ve shifted their mission? If we’re to take The King of Limbs as a concept, even paying close attention to its more cryptic details, then there’s plenty to conclude. Die-hards will no doubt etch the album’s final lyrics (“if you think it’s over, then you’re wrong”) onto their walls and notebooks until they’re finally proven right that there’s a second half to the record. But outside of that, there’s a bigger message here: They’re exploring sound, rather than naming it. Focus on the empty moments (i.e. the 26 seconds after “Codex”), the album name (that aforementioned tree), and the genres they’ve dabbled in (tribal? jazz? dubstep? handclappers united?). It’s essentially a 37-minute jam session — one where they’re carving out their current sensibilities and seeing where they run. While Yorke sounds front and center, he’s not really alone. Those subtle nuances, the little hums, the clattering beeps, and the scratchy percussion? They’re the sounds of five souls, not just one. And while they might not have crafted their best work this time around, they did assemble one of their most absorbing efforts to date. Just remember, nothing’s ever obvious with Radiohead. There’s always something behind those trees and within that mirror – even if you’re convinced at face value. By now, though, you should know how to find it.

So, how about that second half now?

Pick up a copy of The King of Limbs here…

The King of Limbs Artwork 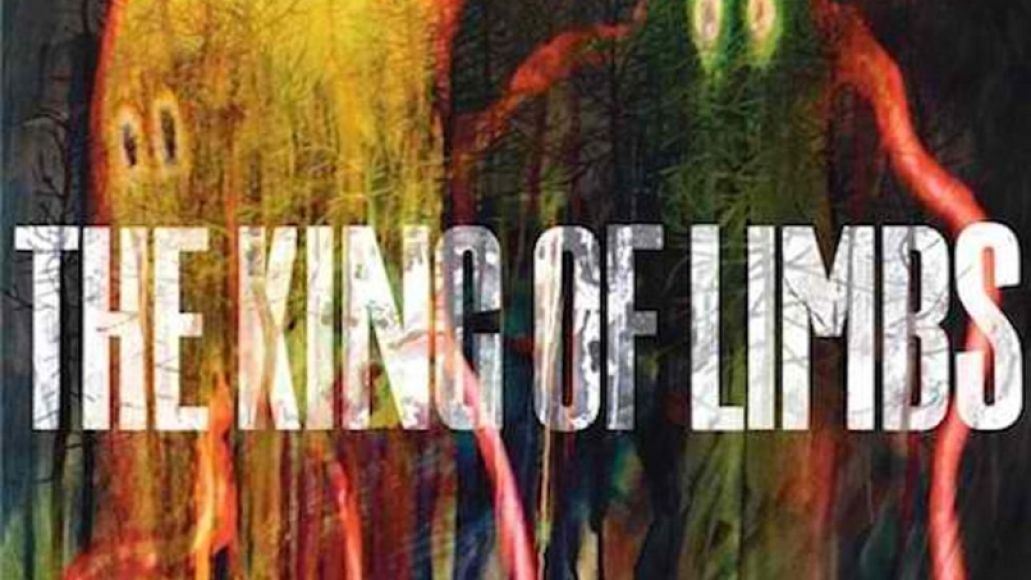 Radiohead Continue Their Explorations on the Nuanced The King of Limbs: Review