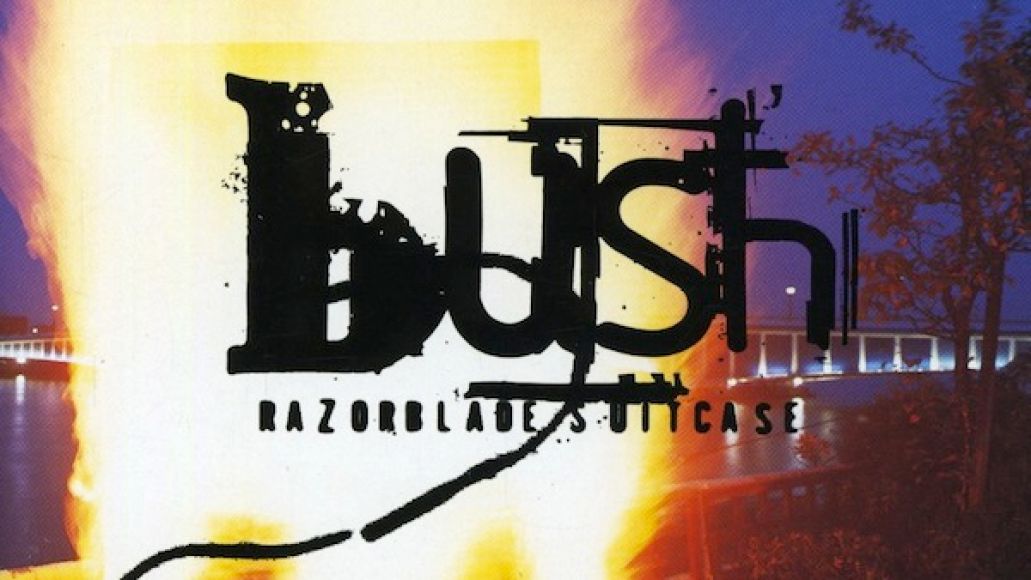 “Razorblade Suitcase. What a cool name for an album”, I thought to myself as a youngster in middle school. I absolutely had to have it, especially after wearing out my copy of Bush‘s debut album, 1994’s Sixteen Stone. The debut produced so many hits, I figured it would be impossible for a follow up album to be anything short of spectacular. However, although my parents would always let me listen to any music I wanted and as loud as I wanted too, it didn’t mean they would give me everything I asked for. So, I went Suitcase-less for weeks after it’s release.

While attending a friends birthday party, I watched him open not one but TWO copies of the album. The dreaded “double gift”, certainly he would realize the right thing to do was to give me the other copy, as he knew I longed for it desperately. But he didn’t, he gave it to his girlfriend instead. Had Facebook been invented, I would have immediately de-friended him and even her just for association, but I kept my cool and my patience. I would listen to (what I thought at the time was the best song ever) the lead single “Swallowed” over and over again from a tape that I used to record the song off of Washington DC’s rock station, DC 101. It was such a different song than the hits off Sixteen Stone, and although I was very young, I could appreciate its originality and understood why the song was number one on the charts for seven weeks. This made me crave the album even more and then finally Christmas morning, the first gift I open, shined and glowed in my hands (probably because it was still in plastic and I was under a light) but alas I had in my posession, Razorblade Suitcase.

Meaningless childhood stories aside, this album is not Sixteen Stone, but in a good way. The main way to lose fans is to give them the exact same thing over and over again and make them believe that’s all you got. This album has much darker tones than its predecessor, as many bands do on their sophomore albums (see Arctic Monkeys, Favourite Worst Nightmare). It produced two successful singles and quickly climbed to number 1 on the charts, where it remained for two weeks.

Gavin Rossdale isn’t the best singer, but he fits the grunge persona well and his distorted sounding vocals on the album’s first track, “Personal Holloway”, give the song an extra punch. It has a little “Everything Zen” hint mixed in there, but this song is a heavy, kick ass way to start off even as it clocks in as the shortest song on the disk.

“Greedy Fly” is the second track and also was the second single released. It fared relatively well, although it did not quite meet the same success as “Swallowed”. The song has an eerie intro and a dark, heavy bassline. The lyrics “Do you feel the way you hate/Do you hate the way you feel/Always closer to the flame/Ever closer to the blade” sound more like Nirvana than Bush, but it’s an overall amazing song in the bands catalogue and one that I think a lot of people sleep on.

Two personal favorites are “Cold Contagious” and “Mouth”. In hindsight, the former sounds like it could be on the new Kings of Leon album, Come Around Sundown, especially given its slow snare and mix of tempos. However, and many fans might agree with me here, I actually didn’t prefer the latter until I heard the remix of the song for the flop-turned-somewhat-cult-classic, An American Werewolf in Paris. The re-upped version of the song made it a little flashier than the original which in comparison seems a little dull and boring.

“Bonedriven” is the only song I really didn’t care for. Possibly because it sounds like “Glycerine II”. With the guitars and the strings, it just always struck me as a rip off. It was the first Bush song to not appear on the Modern Rock charts and maybe that’s because the public had already heard the band do this song before, and they just were not into it. Whatever the case, this track is a blemish on an otherwise stellar album.

What this album has, that no other in the Bush discography carries, is the sound of confidence. The band experimented afterward and never quite captured what Razorblade Suitcase and Sixteen Stone did. Call it a lack of ideas or maybe working with the wrong producers, but this album came out just as the grunge era started to teeter, so you can somewhat use it as a sort of time capsule. No, this isn’t Bush’s best album, but, personally, it’s the one I respect the most from them.