Upon first spying the headline for this event at the Hideout, it seemed too good to be true. Tim Kinsella and whatever awesome friends he happens to be near (the loose collective known as Joan of Arc) recently released the excellent, dronetastic Oh Brother, featuring collaborations with local Chicago improv masters like super drummer Frank Rosaly and Robert A. A. Lowe (AKA Lichens), Hella’s Zach Hill, and former Cap’n Jazz bandmate Sam Zurick (among many, many others). The Lightbox Orchestra, a whoever-seems-to-be-on-hand improvised orchestra, is led by cellist Fred Lonberg-Holm. Each musician is assigned a colored light bulb, which Lonberg-Holm flips on and off to indicate when to play (as well as holding up signs that give more specific instruction). The melding of those two worlds seemed too much to handle, but it was definitely something that couldn’t be missed. So, despite the remnants of last week’s blizzard clogging sections of sidewalk and street, the roundabout trek to the Hideout needed to be made.

Openers Out Like Lambs warmed the room with their insular folk. Occasional reverb-dripping, drugged-out, Velvet Underground-inspired passages were the most affective, yet their brighter, more traditional passages were largely engrossing as well. Unfortunate feedback issues burst into one of their prettier songs, seeming to unsettle the group. Frequent Joan of Arc member Todd Mattei took the second slot, performing as Litesalive. Seated at a table, Mac laptop propped open, Mattei produced what seemed like hundreds of tiny, garbled electronic moments, the best of which felt like looking up in the middle of a subterranean cave and still seeing stars. Roaring winds, throbbing bass, and stuttered Aurora Borealis blobs of amorphous sound filled the room full of Old Style Tall Boys, big jackets, and giant backpacks. 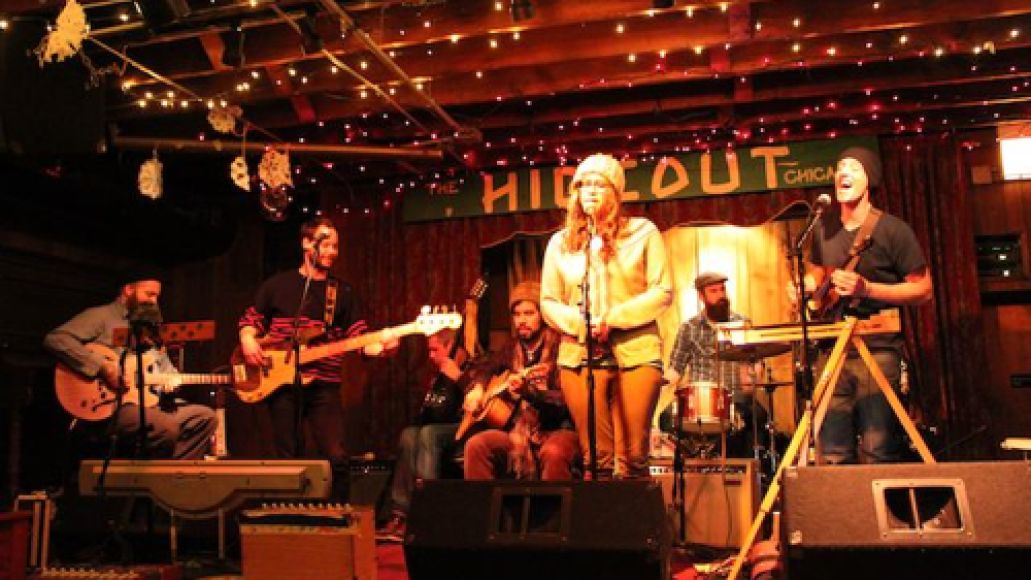 The stage got pretty crowded as the Joan of Arc Lightbox Orchestra began to set up. Thirteen musicians in all began establishing their own little sections of floorboard, cramping the smallish Hideout stage. Lonberg-Holm stood on a small platform before the stage, lightbox and stack of cardboard signs at the ready. Among the musicians onstage were Kinsella (wearing a Suicidal Tendencies hoodie) front and center on guitar, longtime Joan of Arc’ers Bobby Burg, Theo Katsaounis, Jeremy Boyle, and Victor Villareal, Chicago jazz improvisers Rosaly and bassist Josh Abrams, Zurick, Mattei, and Out Like Lambs’ Robert Ryan on guitar and Andrew Murphy on mandolin, among others.

“So, we’re making some unique music,” Burg blurted out at one point, which, to be sure, was an understatement. Lonberg-Holm’s wry smile and the outfit’s many chuckles suggested just how much fun the group was having. The music began with a 13-person noise blast, before all the lights were switched off except for Rosaly and Abrams, presumably because they were most experienced in the setup, having performed with Lonberg-Holm for years. Abrams’ plucked bass and Rosaly’s careening drums shook out as the conductor flipped through signs that read things like “Show ‘Em What You Got” and “No Pitches”. Layers were added and subtracted at precise moments, keeping things fresh and moving. At one point, Villareal and Burg locked into a heavy, rock riff groove, adding Katsaounis’ drums to keep the rhythm rolling. Signs like “Lawn Accident” and “Over a Cliff” flashed up, and Rosaly’s frenetic kitwork was thrown headlong like a wrench into the cogs of the Joan of Arc machine. 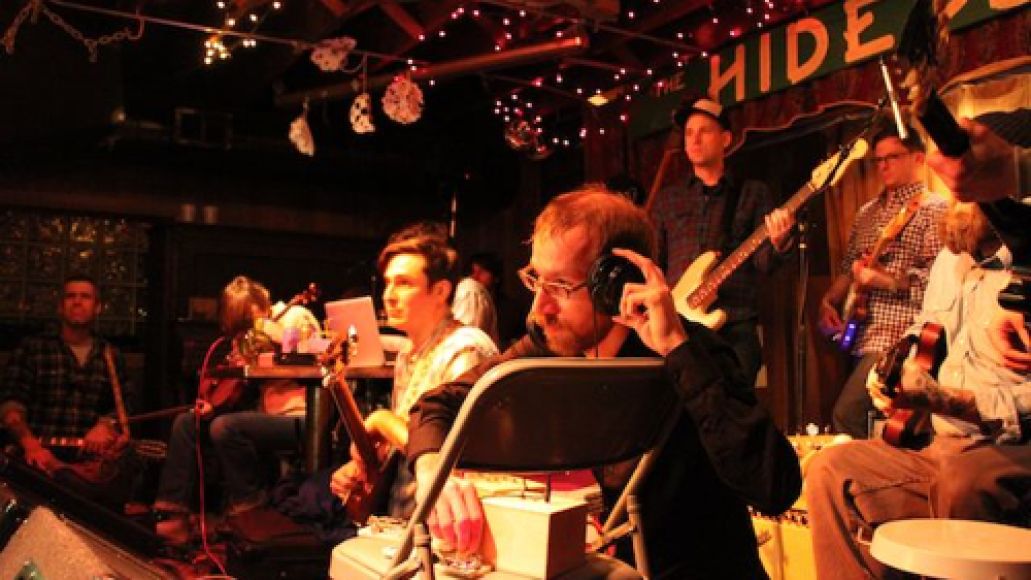 A few fans danced like they were at a Widespread Panic show near the stage front, while others chuckled at a lifted sign with only a drawing of a telephone. Murphy eventually put down the mandolin, instead intoning and shaking various alt-percussion tools, getting into the nearby dancer’s frenzy. As the first “song” rumbled to a close, Lonberg-Holm gave a brief thanks to everyone assembled, audience and participators. The second jam session began with a double-drum onslaught, Katsaounis and Rosaly thumping out a bass drum-driven beat, before a guitar hook gave some sense of melody to the scene. Considering the four electric guitars onstage, it was often tough to pick out where particular notes or sounds came from, but this one seemed to be a Kinsella endeavor. “Intermittent Sounds” flashed up over Lonberg-Holm’s head, and violinist Liz Payne began scraping at the strings while Ryan stood, tapping away at the frets of his lap-steel guitar.

“Wrap Me In Your Sound” and “Melody Here?” seemed to directly result in Boyle and Mattei’s gurgling swashes of electronic noise forming into a bubble of droning, mutating melody. The rock-friendly grooves came and went along with the equally entertaining and informative signs. A chugging bass and curdling electronic groove faded out the evening, as Lonberg-Holm leaned into speak to Kinsella on whether they wanted to play any more and how to credit the ensemble.

Another thanks and a “Joan of Arc!” from Lonberg-Holm meant the night was unfortunately over. While the show didn’t have the same chaotic, gleeful uncertainty and highlighting of individual performers that the more jazz-oriented Lightbox Orchestra shows usually have, it seemed to be as fun and exciting for the performers as it was for the anxious, head-bobbing crowd. The droning intensity of the grooves combined with the funny, intriguing conducting was certainly something to see.