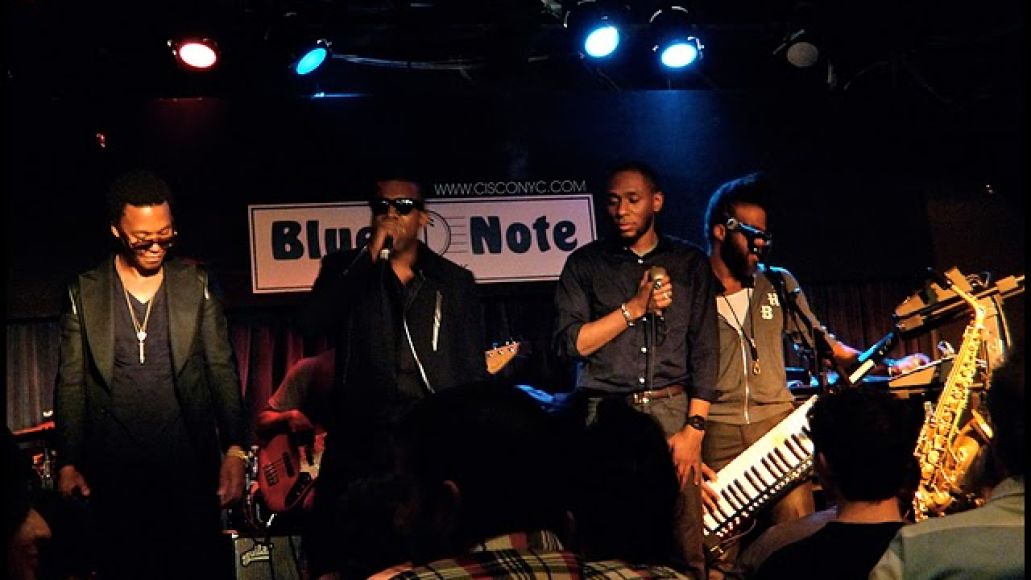 If you’re one who thinks jazz isn’t cool, then here is proof that your grandpa’s music collection is, in fact, way hip: at the February 26th Robert Glasper Experiment show at the Blue Note Jazz Club, three of hip-hop’s biggest names were feeling rather hep. As the announced guest, Lupe Fiasco doled out the rhymes with some back-up by Glasper and the rest of his collective. You can hear one of their cuts, “Kick Push”, below (courtesy of CiscoNYC). Fiasco’s role was part of a two-night engagement with the jazz outfit with the previous night seeing the MC also pay homage to the late J. Dilla.

Like the improvisational nature of jazz, no night would be complete without a surprise or two. Cue an unscheduled appearance by Kanye West and Mos Def. Mr. West, in particular, was clearly in the right mood, busting out an impressive freestyle on a number of topics, from the Grammys (“Cause you know the Dark Fantasy was the highest rated album in history/Get me?/So I just avoid it/Not to be exploited/Not to be recorded/Cause I can not afford it”) to not touring (“They gonna test urine/And than take all the sponsorship for all the tourin’/So where the Dark Fantasy tour at Ye?/I dunno ask Henness-ay, ask Coca-Cola/Sayin’ he ain’t clean enough”). Check out the free style below (again courtesy of CiscoNYC), and read the lyrics to Kanye’s verse at KanyeToThe.com.