The big to-do behind the release of Akron/Family‘s new record, S/T II: The Cosmic Birth and Journey of Shinju TNT, basically amounted to the fact that it was weird: the band went incommunicado, eventually mailing a box containing Crayon notes, a diorama, and a cassette tape to their record label. While that is weird, anyone who’s been following the Portland/New York trio would find that not all that surprising. Their gleeful genre-hopping (from folk, both on their own and backing Swans’ Michael Gira as Angels of Light, to droning psychedelic rock, to straight noise) and manic stage antics are signs that these dudes are doing exactly what they want, having fun doing it, and making some damn fine music in the process. Their show at Chicago’s Lincoln Hall was perfect proof of that.

First on the bill was Joshua Abrams’s Natural Information Society, fronted by the bassist whose name is in the band’s. While I’d seen Abrams’ work in a few different outlets, this was the first time I’d heard the Natural Information Society. Their raga-meets-improvised jazz sound was largely driven by Abrams’ work on some sort of a long, three-string instrument. Towards the end of the set, the bandleader introduced the band, shedding some light on the strange instrument: “I’m Joshua Abrams, and this is the gimbri.” Upon some internet research, it turns out that the gimbri is a sub-Saharan lute used in Gnawa music, so there’s that. The rippling gimbri, paired with flitting guitar work from Emmett Kelly, and drummer Mikel Avery’s interwoven polyrhythms splashed around in droning solo patches with flashes of melodic unity. 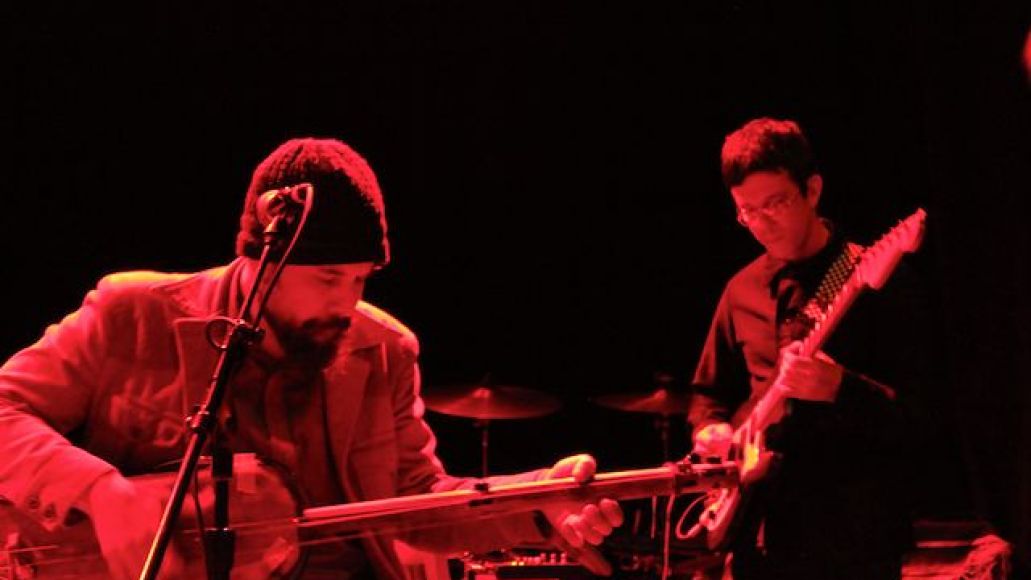 Luaka Bop’s Delicate Steve, a bunch of New Jersey dudes somehow combining the psychedelic, jammy drone, with the intricate, Tropicalia-leaning guitar interplay of Dirty Projectors, took the stage next, and the group of happily hippie dancing youngsters near the front of the stage doubled in size. Their largely instrumental set warbled on fairly close to a jam band sound, lots of octave-shifted guitar solos, whistles, and hand-claps added in for texture. “Attitude/Gratitude” loped and swung, guitarist Steve Marion (he of the delicate nature, presumably) kicking out rapid trills and jabs, while the slide-guitar driven “Butterfly” closed the set with an epic melodic hook.

The headliners wandered out onstage not much later, offering a few “Hello”s and “How are you?”s, quickly bustling together a warm, communal bonfire sample loop made up of garbled, underwater vocal samples, recorder, crackling flames, chirping birds, and the like. The 2009 Set ‘Em Wild, Set ‘Em Free standout “Gravelly Mountains of the Moon” eventually emerged out of the woodsy whimsy, its mixed images of space mountains and technological hauntings (“TV is a glowing representation of themselves”) fitting the low, rumbling harmonies and plucking. 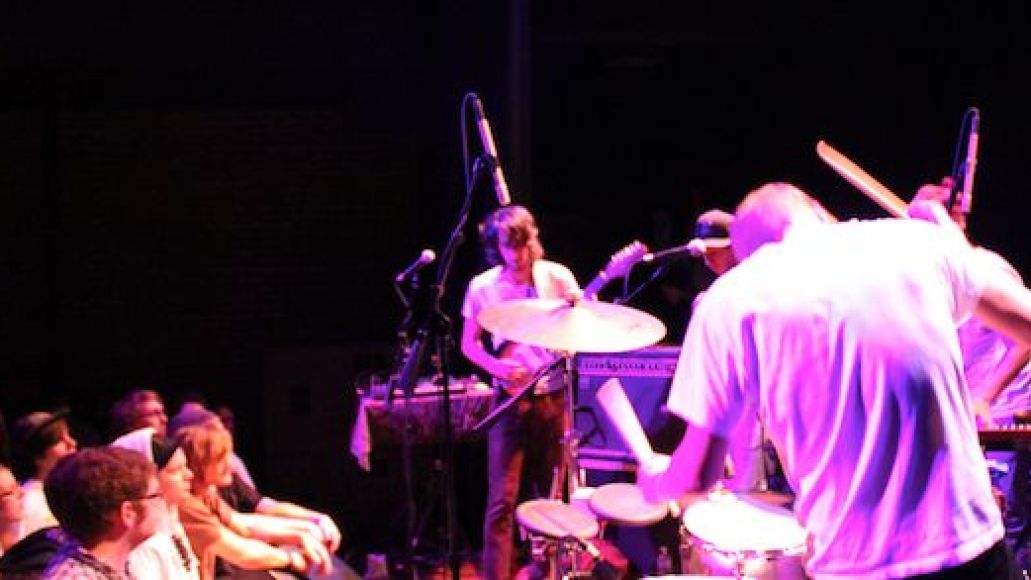 The silly side of the group came out next, in a sort of dance lesson. Guitarist Seth Olinsky urged everyone to clap along on 2009’s “River”, warning that anyone leaving their hands in their pockets would be assumed to be searching for cash, “which is fine…you can pay to not clap.” Bassist Miles Seaton’s chorus of “You and I and a flame makes three” echoed the communal campfire message from the intro. Later, a long explanation on how to dance and feel about S/T II‘s excellent psych folk Island” involved outward and inward technique, pointing at the sky, waving, and remembering “that we all came from the ocean…we’re all water…feel that shit.” As drummer Dana Janssen rang out the vocals, someone had clearly lit up a…cigarette…and the disco ball high above the stage flashed into life.

But it wasn’t all psychedelia (both folk and rock); interludes and segments of pure, aggressive noise music thrashed through the room, as if the trio suddenly decided to cover Wolf Eyes, Olinsky held a microphone in his mouth, screaming and twitching at pedal knobs, Seaton looping swashes of bassy sound, and Janssen flickering a flashlight over a photo-theremin. The amazing, tribal chant closing out “Another Sky”  led to a sing-along drum circle, Olinsky wandering into the crowd with a hand drum, Seaton sampling the chants of those hippie dancers at the front and flipping them inside out. Seaton and Olinsky eventually wound up stage-fighting and rolling around on the ground, chant still going strong throughout the room. 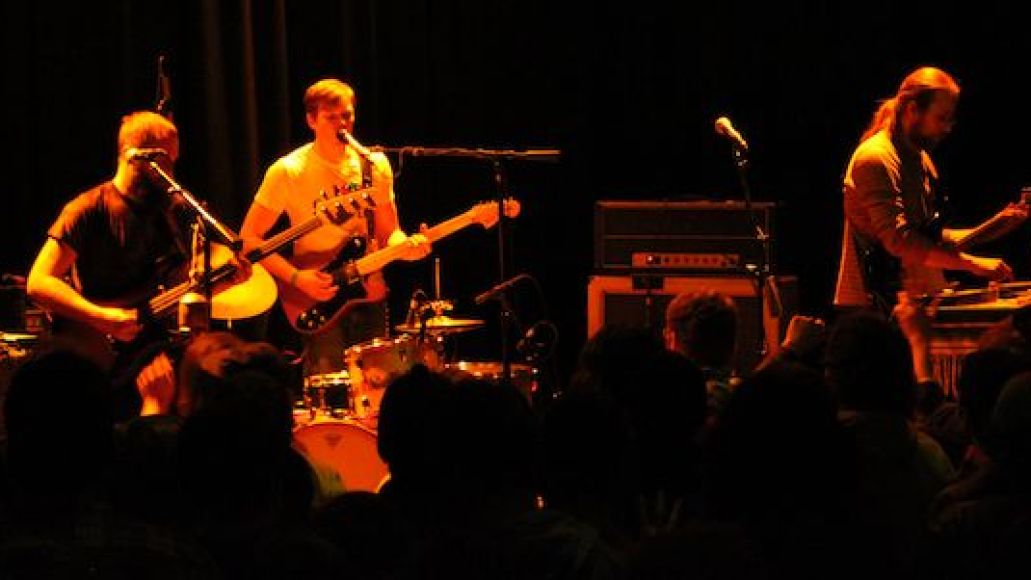 The set eventually ended with the epic “Silly Bears”, before cooling down for a simpler encore. The melancholic “We All Will”, with its lines about things from catalogs needing to be made and how its “sad we have to grow up” ringing out in perfect harmony over soft guitar chords. While the downer seemed totally out of place, the response to this song was perfect, though: “Let’s not grow up, let’s just go home” Janssen shouted out at the peak of “Light Emerges”, the proud messiness, the joy in experimentation, embrace of the raw power of fun completing an amazing show.