Back in December, Murs and Guerilla Union teased at the lineup for their sixth-annual Paid Dues Festival, giving us only headliners Immortal Technique, a “reunited” Black Star, and Murs himself. All long waits must come to an end, however, and the lineup for the So-Cal independent hip-hop fest is upon us.

The second stage, called — wait for it — the Dues Paid Stage, will be headlined by Murs and hyphy hero E-40, and also feature fellow Bay Area rappers Lil B the Based God, Andre Nickatina, and Mistah F.A.B., as well as Eligh of Living Legends, Nipsey Hussle, The Shock G Trio (Humpty Hump and DJ Fuse), Visionaries, and DJ Nu-Mark, among others.

The third stage is called the Grindtime Now Stage, named for the hip-hop battle league, and will accordingly feature emcee battles in addition to regular performances. Paid Dues is going with a “vs.” theme, with Cypress Hill’s DJ Muggs presiding over battles featuring Planet Asia, Bambu, and Sick Jacken of Psycho Realm, as well as DJ Exile vs. Blu and Fashawn. Also billed for the stage are Grind Time Now All Stars, featuring battles between names you will have heard if you’re into that sort of thing.

Slaughterhouse will headline that stage, which will also feature performances by Chino XL, Opio of Hieroglyphics, Grieves w/ Budo, and more.

Take a look at the full lineup below, or at Festival Outlook page. It’s all happening April 2nd at the N.O.S. Events Center in San Bernardino, CA. General and VIP tickets are priced at $45 an $148, respectively, and can be purchased here. 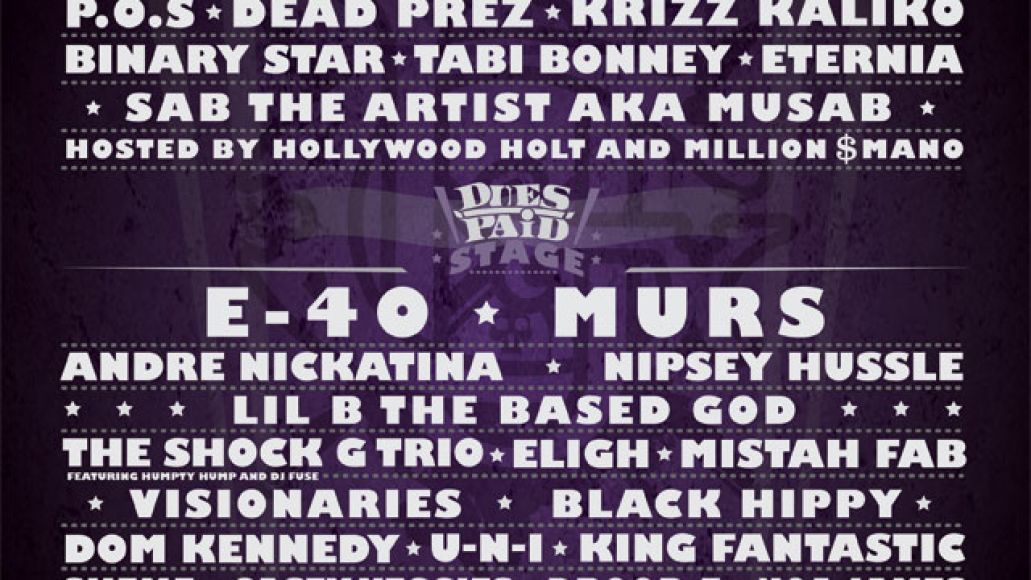