Neo-psychedelia hardly finds success. It’s such a niche genre that begs of minutes you, more often than not, don’t have. Drawn out ballads, exploring nebulous territory lyrically, alongside melancholic instrumentation, complete with three or four solos, work up a sweat for five, six, maybe 15 minutes. You’re supposed to lose yourself in it. That ideology doesn’t sit well with some people. For the hundreds that gathered at Chicago’s intimate, lounge-like Park West, however, they were bonafide believers in Australia’s highly celebrated dream pop craftsmen, The Church, who arrived to deliver three album’s worth of material on what’s being billed as the Future, Past, Perfect Tour.

If you’ve never listened to Starfish, The Church’s fifth, and breakthrough, album, you’re not necessarily missing out, but it’s something that merits a spin. Odds are you’ve heard “Under the Milk Way”, the band’s most popular single to date, if you’ve turned on Lite FM, bought an ’80s compilation, or caught Donnie Darko on Starz. This might be going out on a limb, but it’s one of the best songs of its time – and its genre. It’s an absolutely timeless (and honest) masterpiece that succinctly crafts the most commendable facets of its respected genres. Now, as easy as it would be to call The Church one-hit wonders – especially in America – it’d be incredibly unfair. The Church deserve better, at least compared to the band’s contemporaries. You might not draw up a song of theirs from memory outside “…Milky Way”, but if you gave them a chance, picked up Starfish, and listened, you’d find yourself with three or four new favorites. It’s an oft forgotten classic from a win some, lose some decade. 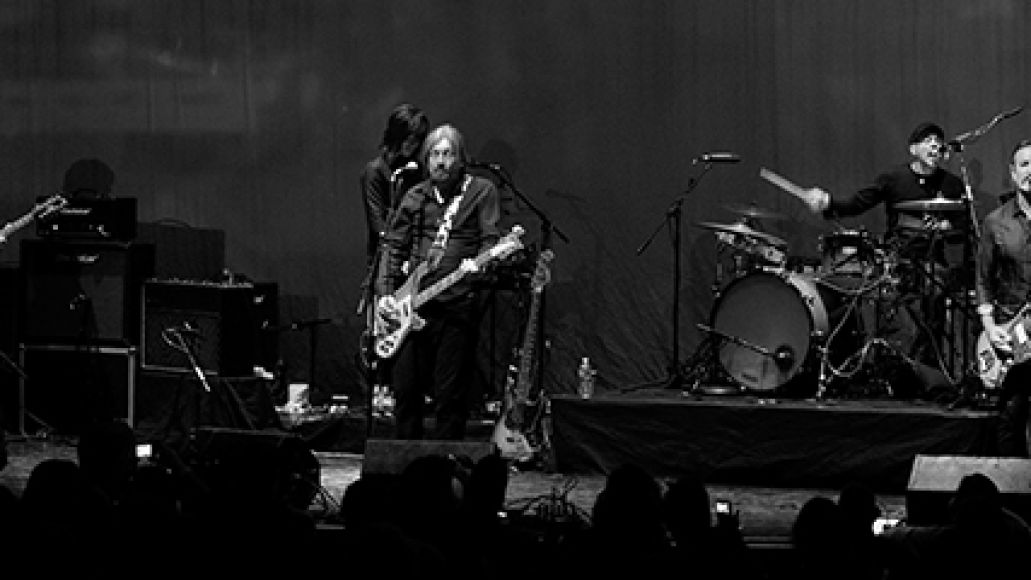 So, that’s why the idea of hearing the album performed live seemed like a great idea. What didn’t seem like a great idea was sitting through the group’s 2009 effort, Untitled #23, and 1992’s Priest=Aura. Not that they’re bad albums – they’re not – but they just don’t demand to be heard in its entirety, at least not on-stage. To make a point, in a recent interview, Pearl Jam’s bassist Jeff Ament discussed the band’s hesitation to perform albums from start to finish, saying, “it didn’t work very well because it was kind of a little bit too down…I think we did a good enough job of mixing up the sets every night that we give people a taste of every record.” The same could apply for The Church here.

Early Friday night, die hard fans lined up outside Park West, despite the chilly lakeshore air and sprinkles of snow, wearing faded out tour shirts and, well, plenty of years, too. This was an adult crowd, ready to enjoy the night rather than celebrate it. (There’s a difference, but you can argue otherwise.) These weren’t the types ready to hear a few classics and call it a night. As one fan declared in the lobby, “There’s only one Church.” However, even with that ardent enthusiasm, it was clear several tunes off Untitled #23 and Priest=Aura lulled past them. Kicking off the event, the group’s most recent effort spiraled by with few moments of great acclaim. “Space Saviour” picked up the pace, receiving a partly standing ovation, but the remainder entertained rather than thrilled. Let’s just say, when frontman Steve Kilby announced, following the first intermission, “We’re gonna give you Priest = Aura,” it didn’t necessarily raise any hairs. 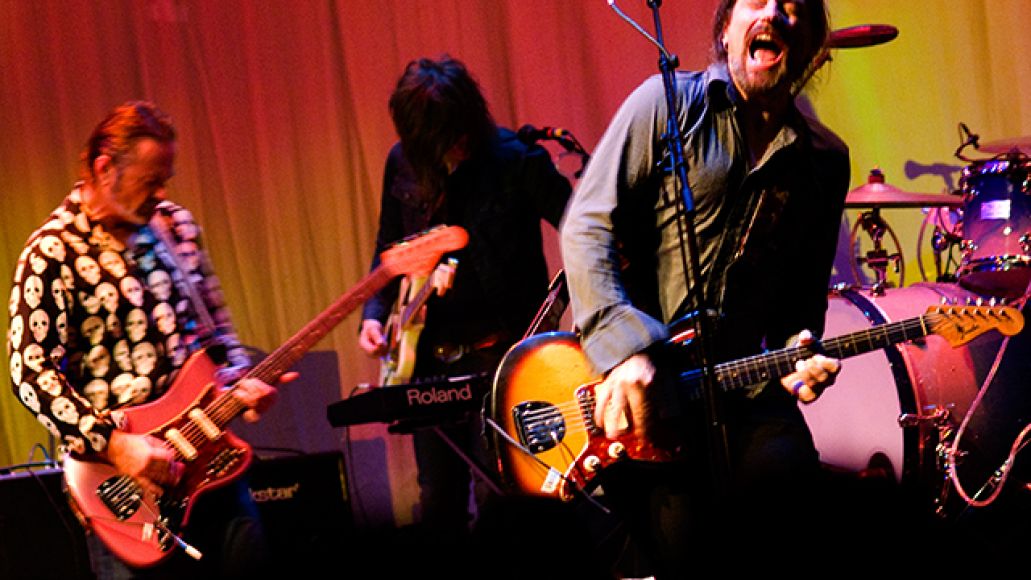 Priest = Aura fared better, even though, oddly enough, it’s not a stronger album than Untitled #23. Several of the tunes drift off endlessly and lyrically it tends to bleed a little too esoteric. On stage, however, it opens the realm of possibilities for the band. If it’s any indication, the band came to life here. Seven minute opener “Aura” pierced the audience, “The Disillusionist” brought fans to their feet, and the near 10 minute opus “Chaos” found the band at top form. Guitarist Peter Koppes nailed his fingers into his fret, keeping his eyes closed as the audience roared around him. Keeping with the tracklist, the second performance came to an end with the slightly forgettable “Film” and that was that. 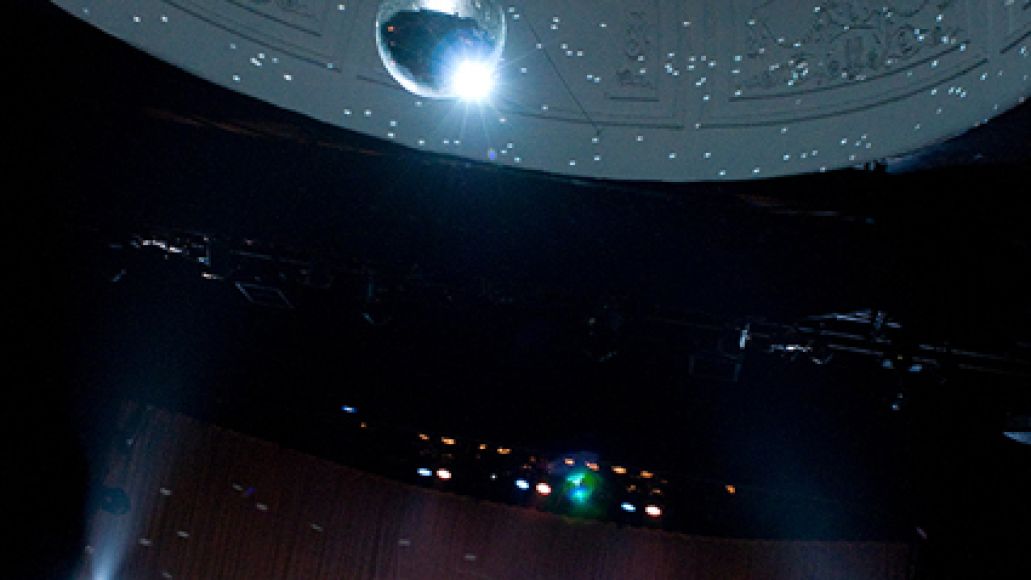 Finally, Starfish arrived. Quite noticeably, the energy in the venue shifted. The audience just approached the songs differently; though, possibly because the songs seemed far more accessible. Okay, so a spot-on rendition of “Under the Milky Way”, complete with some dreamy, scintillating sparkles from the venue’s disco ball, early on clearly was a thrill, but on the whole the music itself just felt more down to Earth. After listening to quasi-preachy neo-psychedelia for two hours, the jangly, let’s face it, college rock was more than welcome. Once “Destination” hit, the doors opened up to the band’s strongest features. “Blood Money” felt just as lucid as it did scoring Miami Vice, “North, South, East and West” chugged on by with a balmy and amicable tone, in addition to setting up a four-hit punch that continued with “Spark”, which took us back to the days of Dramarama or even early R.E.M., the heart-on-its-sleeve cat calling of “Antenna”, and to the night’s finest moment: the cocaine-fused, needle sewing guitar riff riot that is, “Reptile”. The remainder of the set worked like an ice pack, centering us out as we came back to reality.

It’s hard to stay invested in sprawling psychedelia for too long. So much of it entertains the idea that you’re on a “trip”. The thing about trips is that they’re long, they usually require a nauseating amount of introspection, and can sometimes be a downright bummer [, man]. Even sitting through three Pink Floyd records is a chore – especially back to back. So, fan or not, the idea of revisiting all three albums might have seemed unreal on paper, but in action, it didn’t do much justice for The Church. In some respects, you could argue it revealed that the band was simply best at its core: writing solid college rock with neo-psychedelia influences. Again, it’s a subjective measure, but Starfish sold the evening and it was somewhat unfortunate to have to sit through two hours of a hit or miss setlist to reach it. Sure, waiting is sublime, patience is virtue, etc., etc…. but, it’s also a pain in the ass. Bottom line? Jeff Ament speaks the truth.