Editor’s Note: It’s hard to believe, but it’s been a full decade since we got a new album from R.E.M. As you process that, we’ll dig up Justin Gerber’s classic review of Collapse into Now, the band’s swan song, which originally published on March 7th, 2011. Thankfully, the band went out on a favorable frequency, Kenneth.

R.E.M.’s 2008 album, Accelerate, was a welcome return to the electric guitar and goosebump-inducing harmonies from years gone by. There was a renewed energy emanating from deep within singer Michael Stipe, guitarist Peter Buck, and bassist Mike Mills that hadn’t been felt since the departure of former drummer, Bill Berry. The sting of 2004’s Around the Sun brought forth a new recording attitude, as well as a brand-new Irish producer (Garret “Jacknife” Lee) replacing Pat McCarthy. A successful tour followed, and…

Backstory, backstory, backstory. R.E.M. have been around so long their reviews should come prepackaged with something akin to the first paragraph. It comes with the territory; a gift and a curse for existing bands past their expiration dates. Most groups get compared to other groups while R.E.M. is consistently compared to, well, R.E.M. This reviewer refuses to buck the trend, so here it goes:

Collapse into Now is the band’s most musically diverse offering since Green, maybe even Lifes Rich Pageant.

Collapse into Now is the band’s best record since New Adventures in Hi-Fi.

Collapse into Now has the best closer since Automatic for the People.

But all comparisons aside, Collapse into Now is one heck of an album.

The opener “Discoverer” continues from where the aggressive Accelerate left off. Buck and Scott McCaughey, the band’s unofficial fourth member, lead the charge with their electric guitars propelling through this stomping track. Stipe howls out, “Hey baby/ This is not a challenge/ Just means that I don’t love you as much as I always said I did,” and you believe him. He’s been doing this for 30 years and has earned our trust. The song’s been floating around the interweb for a few months now, and on its own may not stick out as much as other tracks do. However, it feels like the only song to serve as the album’s launching pad.

The driving “Alligator_Aviator_Autopilot_Antimatter” succeeds where “I’m Gonna DJ” did not — a worthy addition to the classic dumb pop songs of R.E.M.’s past. When the band finally decides to tour later this year (hope springs eternal), crowds should jump about with reckless abandon, specifically to the Stipe/Peaches harmonies sprinkled throughout the verses. “All the Best”, another rocker, doesn’t fare as well. The vocal delivery sounds too similar to “Discoverer”. It’s as though the track exists solely to temper off the slow-to-mid-tempo offerings that make up the majority of the record’s first half.

The quartet of songs in the aforementioned first half open up to be quite an array of intimate affairs. Buck’s acoustic guitar picks its way through “Uberlin”, a love letter to one of the cities the album was recorded in. Stipe and Mills never sounded better, continuing their return to harmonies that boosted Accelerate. The closest this record gets to politics is “Oh My Heart”, but that’s only because a character from “Houston” returns home to New Orleans. It’s a more hopeful song about a city still struggling to recover, working with familiar yet evolving lyrics (“The storm didn’t kill me/the government changed”).

Peter Buck mastered jangle pop long ago and brings it back with complete success here in the forms of “Mine Smell Like Honey” and “That Someone is You”. Both offer rousing choruses that beckon you to snap out of that space you currently inhabit and just run around, screw all. When you catch your breath, you cool down just in time to listen to the beauty of “It Happened Today”. Is it a cynical song dressed up in pop rock? The song belongs to the listener now, so you determine the verdict. The latter half, with harmonic assistance from Eddie Vedder, among others, seems to point to an optimistic conclusion, though.

Jacknife Lee returns behind the boards again, and while many felt he compressed Accelerate too much, he may be the most valuable participant this go around. The rock songs still feel in-your-face, but his work with the softer tracks is quite impressive. A perfect example of such execution is in “Every Day Is Yours to Win”. Lee transforms this track from yet another acoustic number into a hushed lullaby, waiting for you to fall asleep. Buck’s guitar play resembles a music box starting up while Mills’ harmonies perfectly compliment Stipes’ distant, cloudy vocals.

The penultimate track, “Me, Marlon Brando, Marlon Brando and I” could have been relegated to B-side duty. In addition to “All the Best”, there is nothing blatantly subpar here. It’s just that the song sits there, blocking the path towards the finale. “Blue” acts as the final piece of the puzzle. The Patti Smith-assisted track bears more than a passing resemblance to “Country Feedback”, but its guitars that bring forth such a hurricane of distortion and reverb cannot be dismissed as some cheap knock-off. Smith’s callings to a “Cinderella Boy” linger long after the record ends, and Stipe’s spoken-word poem sits comfortably within the song’s walls.

Just when you think the album’s over, a reprise of “Discoverer” sneaks in to close things out. Perhaps this serves as an allegory to R.E.M.. This is their last album for Warner Bros. There is no tour currently on the slate. They don’t have to do anything at all, ever again. The band members are nearing an age where the more fortunate of us are able to seriously consider retiring and using AARP discounts at their respective 24-hour diners and local theaters. With Collapse into Now, R.E.M. might have discovered they’re still vital, still relevant, after all.

Pick up a copy of Collapsed into Now here… 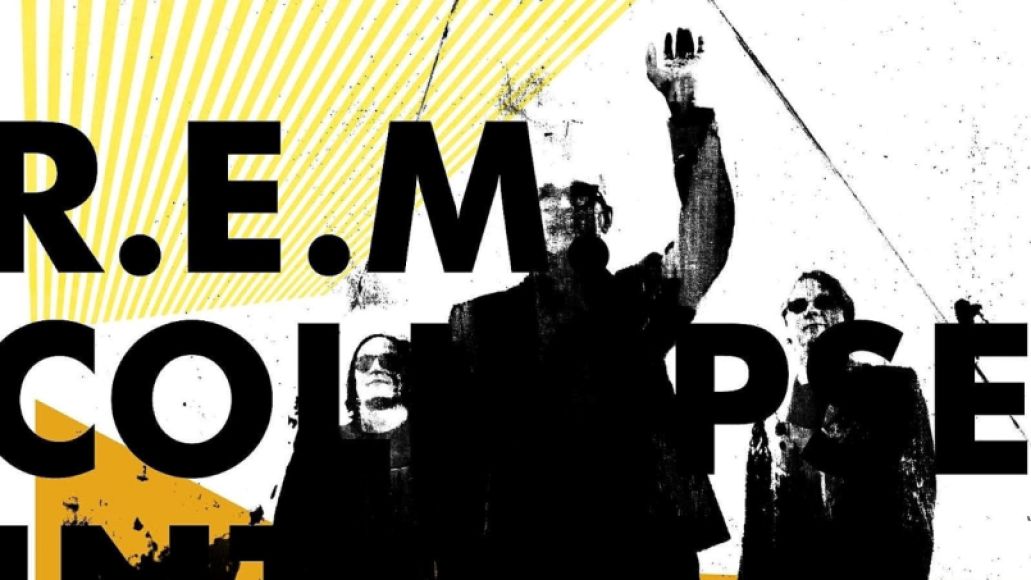 The Real R.E.M. Stand Up on Collapse into Now: Review