Trying to sum up a day at South by Southwest is one difficult chore. Of course it’s a memorable experience (hell, where else can one see Jack White deliver a surprise set from outside a truck turned record store before lighting up a cigarette and selling vinyl from behind a window), but there’s only so many ways to sum up an 18-hour day that brings both sheer exhilaration and utter exhaustion. Along with the aforementioned performance by the Jack, SXSW Wednesday featured heavy rock warriors Queens of the Stone Age, 80’s titans Duran Duran, indie risers The Dodos, The Antlers, James Blake, and Dale Earnhardt Jr. Jr., a trip to Ice Cream Man and Conan’s new movie, dinner at Iron Works, and a 75-minute panel on Vlogging presented by CoS’ Mike Roffman and Sami Jarroush. Thankfully, liquor and cab rides are in plentiful amounts; otherwise I might jump out of my hotel window if Thom Yorke even thinks about opening his mouth again. -Alex Young 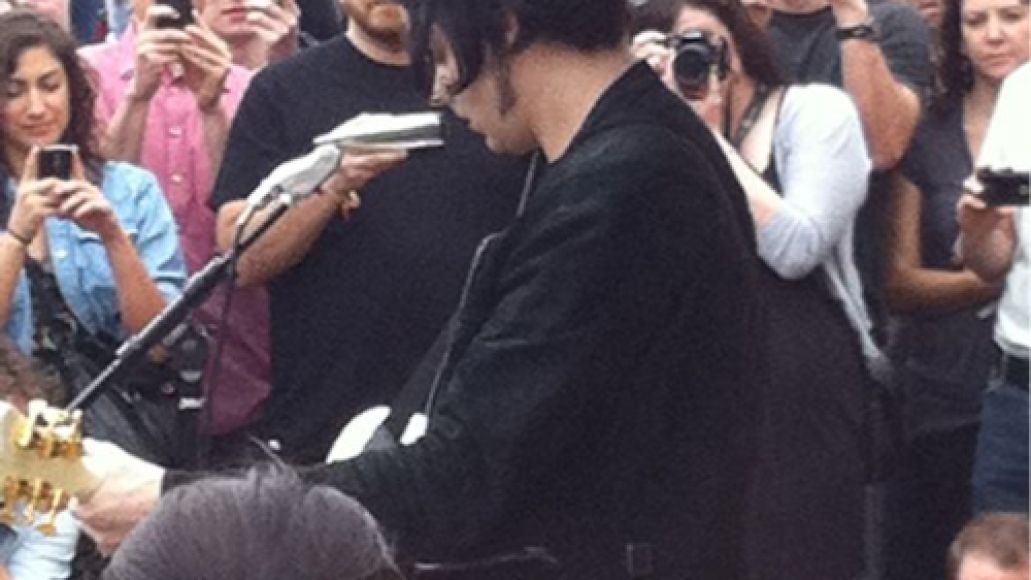 Jack White is the perfect cure for exhaustion. At 11:30am, my phone buzzed with a message that the Third Man Records founder would be delivering a surprise set outside his newly crafted Rolling Record Store in a mere 30 minutes. A cab ride and a few sprints later, I joined the crowd of about 1,000 who had formed a giant circle around the truck (Aziz Ansari and Alison Mosshart were among the others in attendance.) White appeared moments later, guitar in hand, and quickly began work on a cover of Buddy Holly’s “Not Fade Away” before dropping some White Stripes goodness with “Dead Leaves and the Dirty Ground”. Ten minutes later, it was all over, with Jack then jumping back inside the rolling record store to lit a cigarette, swing some vinyl, and MC his latest signing, Seasick Steve. Thirty minutes later, most of the crowd was still gawking in awe. -Alex Young

What do you get if you take the quaintness of a ukulele and the ferocity of a precision rock trio?  The monstrosly catchy melodies of Tristen & The Ringers. With a jumbo-sized rock sound and a penchant for manic pixie lyricism, the foursome are simultaneously adorable and unbelievably and surprisingly intense. Regardless of how you take them, they’re immensely talented. -Chris Coplan


What is it about these Detroit boys and their unique blend of vintage Motown and and synth-y grooves that make them so appealing? Perhaps their tracks are so enjoyable in opposition of their goofy attire and flashing stage show. Either way, they continue to be a band you can’t help but love despite some gleaming image flaws. -Chris Coplan 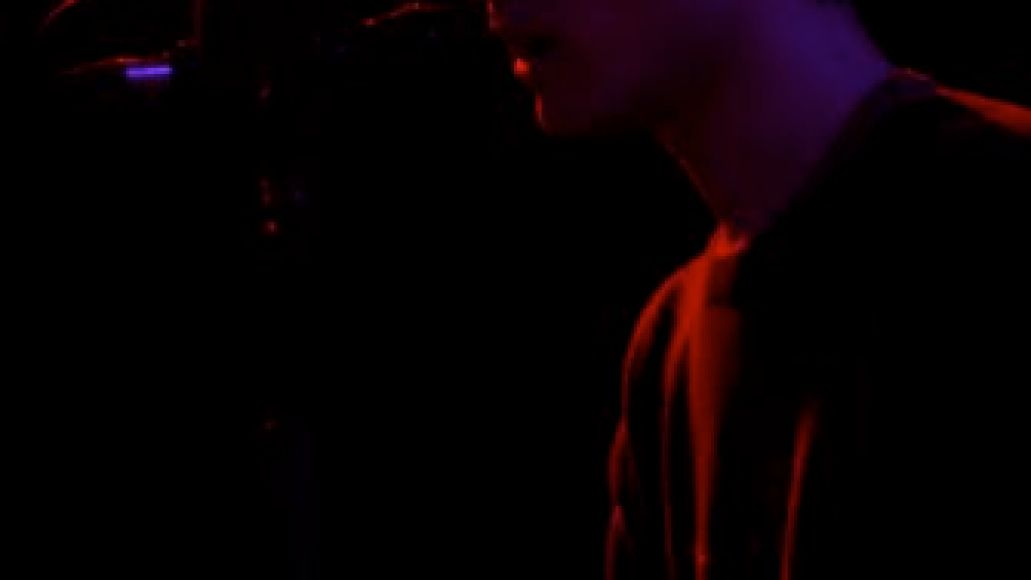 The din of SXSW found its exception at James Blake. Sparse, delicate vocals trickled out from Mr. Blake (who looks all of 12-years old IRL), whose voice can waver between soulful R&B and an effeminate angel. Juxtaposed against the lowest of low hz, velvety drum accents, and ambient dub effects, James Blake and his band filled the large back yard arena of Stubbs nicely, keeping the attention of a buzzed crowd of curious onlookers, and a few electro-heads getting down with the new black of electronic music. -Jeremy D. Larson 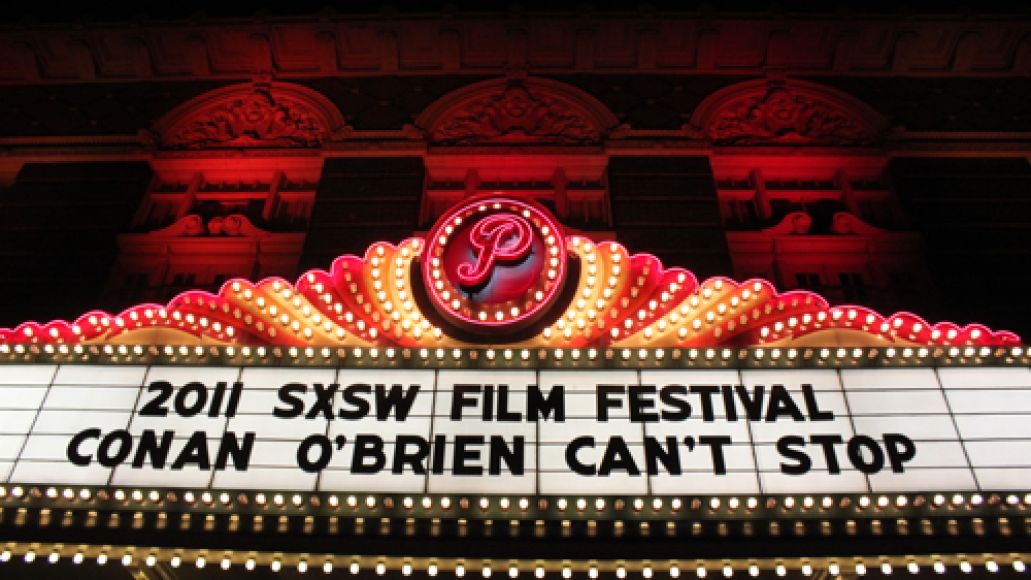 In director Rodman Flender’s documentary about Conan O’Brien’s ultimately successful The Legally Prohibited from Being Funny on Television Tour, viewers catch a nearly two hour glimpse at the late-night legend laying it all out. Following his exit from NBC, O’Brien couldn’t perform on television for several months, and as a result, took his gig on the road. Fun for us, exhausting for him. As the film progresses, audiences witness O’Brien shed layer after layer of himself as the tour ticks on and on across North America. Yet, regardless of the endless meet & greets, the countless hours spent in waiting rooms, the buckets of sweaty energy on stage, and the downright excessive fans, O’Brien never loses his witty outlook on life. There are times when he’s held against the wall, seemingly about to lose it (e.g. Bonnaroo), but he’s still tossing jokes around like it’s nothing. Some highlights include a road stop prayer circle with tourists, a nightmarish Hollywood gig with Jack McBrayer and Jon Hamm, and seeing O’Brien bantering with his kids. They say Jay Leno’s the hardest working man in show business, given that he does 250 shows a year…while that’s still arguable, you’ll leave this film having discovered a true contender. Scratch that, a total knockout. -Michael Roffman

Midnight at The Parish, The Antlers assumed the stage to give SXSW the first taste of their new album. Old faithfuls from their 2009 Hospice will always be powerful, intimate, crescendo-filled post-rockers, but most notable about Wednesday night’s performance were the peppering of new songs from their forthcoming album Burst Apart. Where earlier songs came off as chapters out of books, the newer songs were more short stories in and of themselves. Peter Silberman’s voice goes above the rim on the new songs and his clarion yawp rasied some eyebrows and grins on the new tracks — they rocked markedly harder than most songs off Hospice. The Antlers will debut their new album Thursday in full, but last night, “Parenthesis”, “No Widows”, and “Rolled Papers” were a one-two-three taste of what’s next from the band. Expect Burst Apart‘s song-centric, guitar-based songs to still be about life’s struggles, just maybe not have as much gravitas as the full scope of Hospice. -Jeremy D. Larson

Josh Homme emerged onto La Zona Rosa’s stage at 12:15 AM with a flattened Mohawk; I made the mistake of referring to it as a “mullet,” which was quickly corrected by the person next to me. “Besides,” he added, “what the fuck does it matter. The guy can do whatever he wants.” Appropriately, this comment proved to be the theme of the night as Queens of the Stone Age’s 90 minute set featured the band’s masterful frontman chugging a bottle of vodka, smoking cigarettes, and destroying ear drums with some of the loudest music known to Earth. In regards to the latter, the band raced through their self-titled debut in blitzing fury before using the encore to spew out classics like “I Wanna Make It Wit Chu”, “Little Sister”, and “Go With the Flow”. The only thing more bad-ass was the fact Jack White and the Foo Fighters were watching from backstage. Only in Austin. -Alex Young 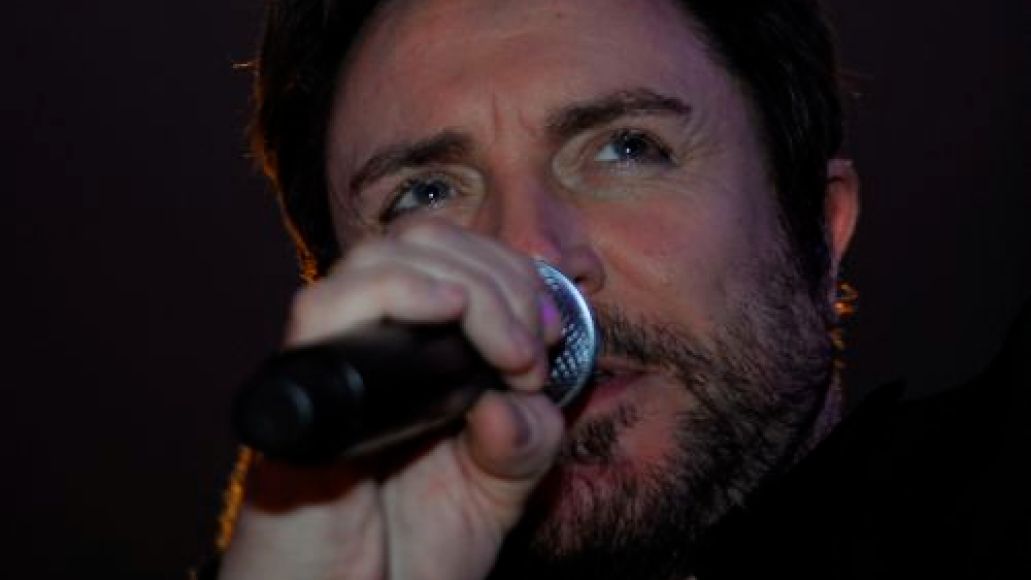 Stubbs and SXSW played host to the kick-off of Duran Duran’s 2011 world tour. LeBon and co. delivered a smashing 12 song performance beginning with “View to a Kill” ending with “Girls on Film” and highlighting the entirety of their thirty year career. The tour is backing their recently released 13th album, All You Need is Now. A few new tracks punctuated the catalog-digging performance, including one that the band jokingly restarted after botching the intro. “We did say that this was our first show of the tour, right?” Set highlights included the long-retired “Friends of Mine” from their first album, the new track “Being Followed”, an outstanding performance of “The Chauffer” featuring LeBon on what looked like an ocarina, and their encore rendition of “Girls on Film” featuring an interlude of the Motown track “Poppa Was A Rollin’ Stone” and solos from every performer. Naturally, “Hungry Like the Wolf”, “Notorious”, and “Ordinary World” were performed, “Rio” was surprisingly absent. As always, the incomparable Simon LeBon owned the stage. Whether exuding a profound sexual presence (posturing like a badass, asking the audience who their daddy was), or just being goofy (“flying” around the stage, miming the creation of a large orb, then shoving the orb in his mouth and growing at the front row) there is no doubt that he is the man, and everyone in the audience had been Simon LeBoned. -Cap Blackard 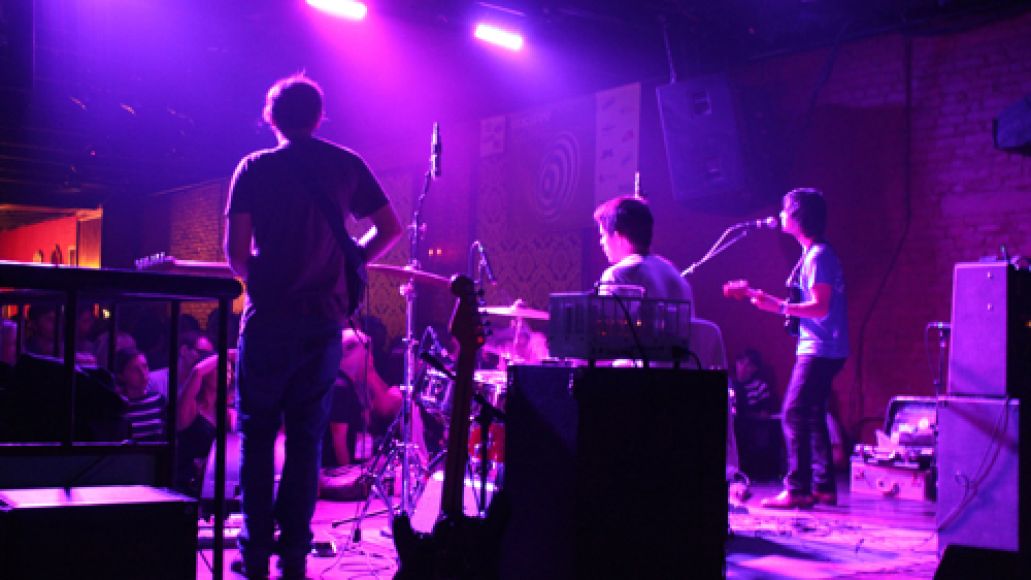 It was this, the third time I’ve seen The Dodos, that I focused on their musicality. No hyperbole: Meric Long and Logan Kroeber should be hailed as visionaries. Their playing is like nothing out there today,  with Long mashing up bluegrass fingerpicking with pure garage rock, and Krober’s signature drum kit setup. Their sometimes lukewarm songwriting on record is forgotten live and they play with fury, focus, and passion. The Dodos’ 1:15am set at The Parish was my highlight of night. -Jeremy D. Larson