The second day of South by Southwest always seems to be the most exhausting. Its the day the sun feels the hottest, the lines look the longest, and when a trip to iHop and spreading fake rumors on Twitter seem more appealing than another 3:00 a.m. night out. Amidst all that, The Strokes nearly caused a riot, TV on the Radio slayed Stubb’s, Odd Future did mock face plants up and down Red River, and Moby hosted a vegan BBQ. Also, despite what you read on Twitter, there was no Radiohead show at Fader Fort, no Foo Fighters gig at Kung Fu Saloon, and David Bowie most certainly did not DJ at Buffalo Billiards. And, to think, we still have another two days to go…

Unequivocally worth every praise lavished on them. The young band only played a 20 minute set to around 70 people in the corner of a bar, and I never wanted it to end. Their electronically hypnotic dream-pop bounced around the bar, and was sadly cut short before you could call the show a full on experience. The four of them treat their voices like guitars — beguiling the hell out of their vocal chords with organic technique and creative synthesizing. The young pixie front-woman Raphaelle Standell-Preston will no doubt garner comparisons for the first part of here career, but her inoffensively precious demeanor and heart-stopping belting will separate her soon enough. –Jeremy D. Larson 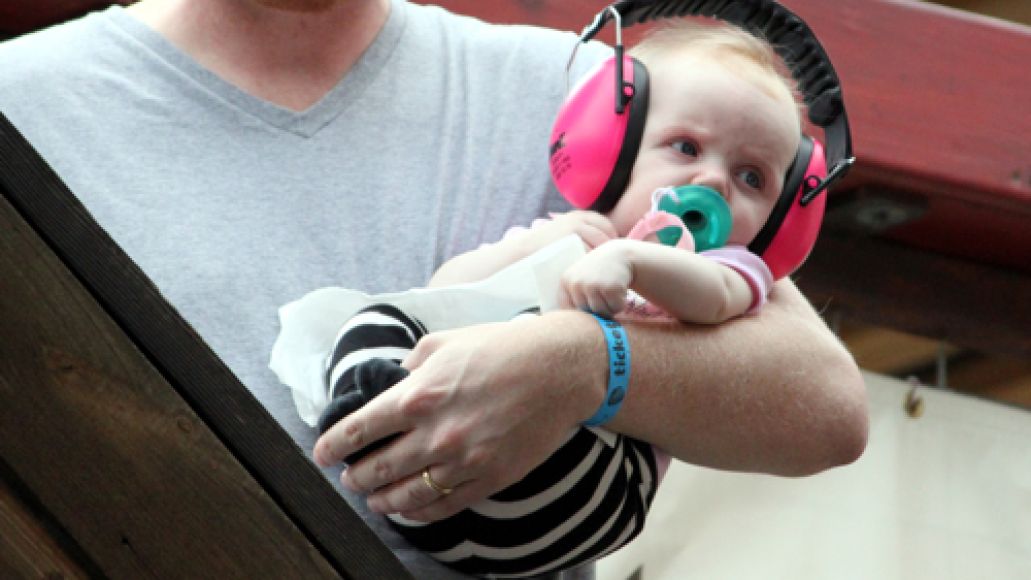 The Pains of Being Pure at Heart -Club DeVille – 4:oo p.m.

With a couple new coats of wax on their sound, these young kids are treading dangerously close to an instrumental sound that feels too simplistic to care. While that shoe-gaze sound still holds court with the band, news songs from their sophomore LP have taken the band in a direction rooted in easy and effective chord structures and easily identifiable hooks. This is all fine and well, but the band’s apparent lack of enthusiasm and passion while playing relatively trotted-out songs is less than engaging live. That being said, the fuzzy and warm guitar leads were fuzzy and warm on my ears and the whole of the show was a great wash of psych and smile-inducing pop. –Jeremy D. Larson 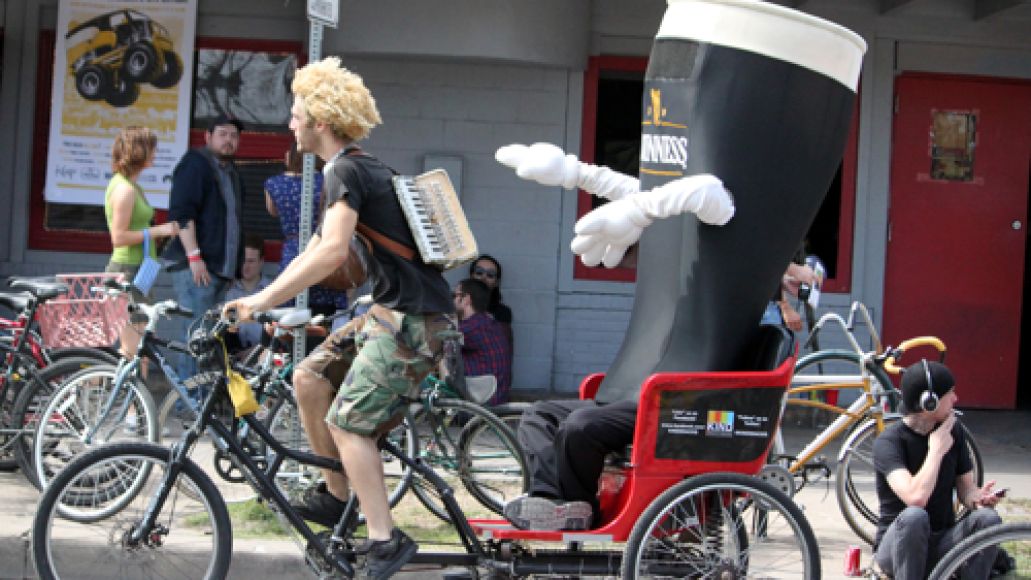 How’s this for a haphazardly-slapped together band: Cole Smith from Beach Fossil on drums, Nardwuar the Human Serviette, the wacky (which just scratches the surface describing this guy) Canadian journalist on vocals, and Andrew WK on the organ.  If this sounds bizarre enough, then the songs the odd trio doled out during their primo afternoon gig at Headhunter’s should melt the top of your head clear off; from Nardwuar’s love of cheese to his debilitating rash (which apparently makes one sprout hair that would Robin Williams jealous), the campy cuts incited the already-energetic crowd and shok the very foundation of the second floor balcony where I stood.  As a means for a break from the stuffier acts of the weekend, the group gave concertgoers a reason to laugh in an old-school, goofy punk fashion (not to mention also giving them a work out courtesy of Nardwuar’s hands-on crowd interaction techniques).  Nothing haphazard about that at all, actually. -Chris Coplan 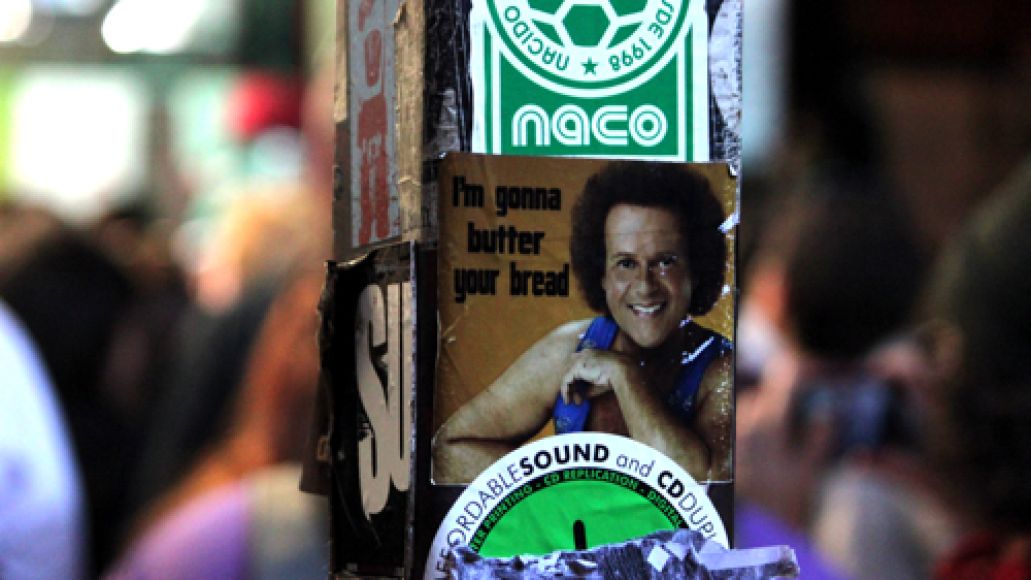 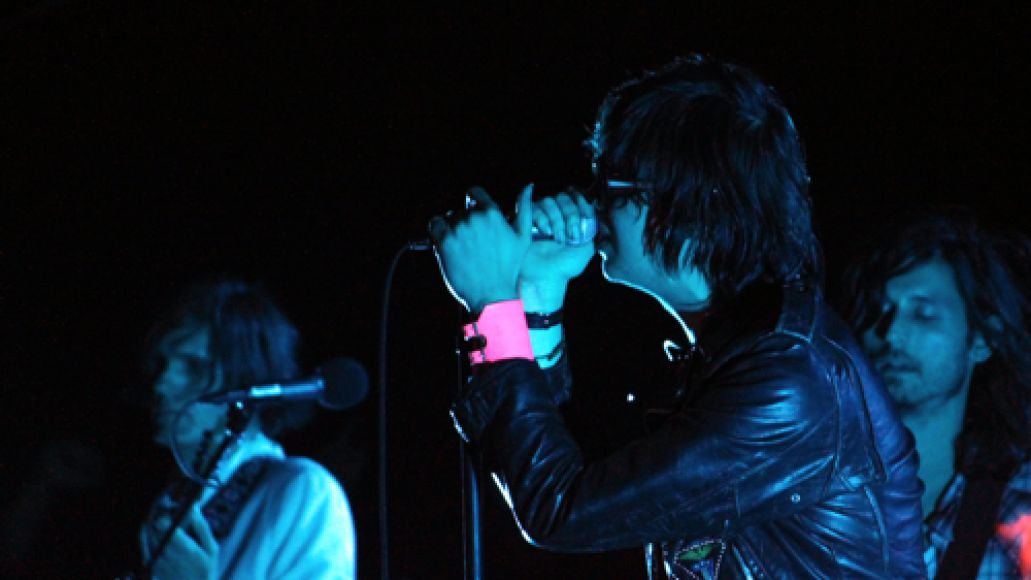 A week before they release Angles, their long gestating (and now heavily discussed) fourth LP, The Strokes decided to offer a free show for Austin, TX. Not just for those with badges and wristbands, either; free as in, “C’mon in, folks. Enjoy the show!” So, you can imagine the chaos that ensued. While peaceful in pockets, the Auditorium Shores buckled under the pressure of people, well, being people. A few riots broke out, a fence collapsed, and die-hard fans, or just bored locals, swarmed the place. Still, with that chilly Austin breeze and the summer festival setting, there was little room to complain – especially since The Strokes happened to sound on-target. Leading in with Room on Fire opener, “What Ever Happened?”, the New York quintet ruffled enough feathers to get the nostalgia flowing. Plenty of hits followed (“The Modern Age”, “You Only Live Once”), in addition to new material (“Under Cover of Darkness”, “You’re So Right”). While rusty in parts, namely a charmingly stumbling Julian Casablancas, everything came off fresh and inviting. 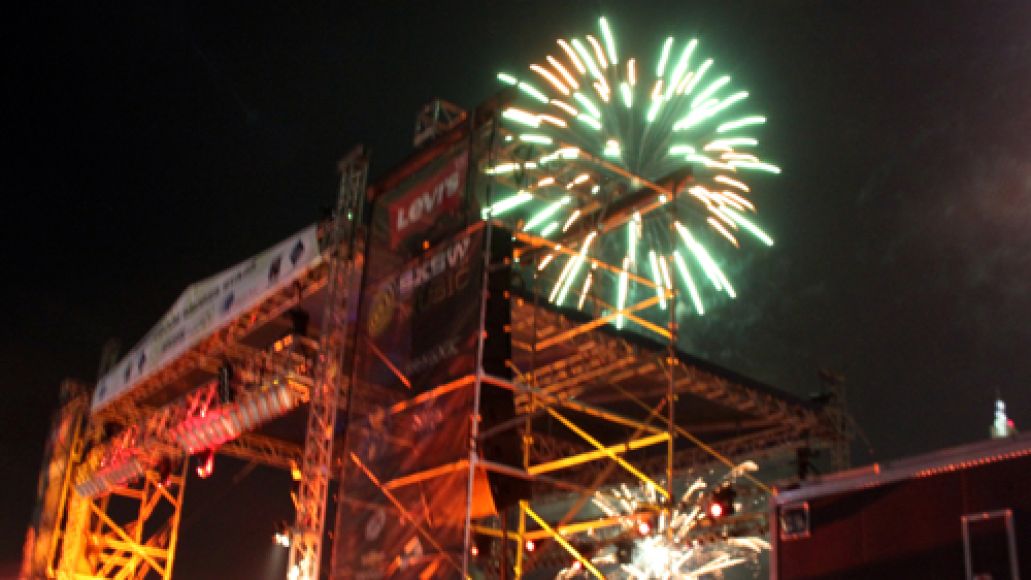 “BBQ before the show was a bad idea,” Casablancas joked toward the end. Although he did remain stoic throughout the evening, he added enough grit to cleaner, newer material like “Life is Simple in the Moonlight” and older classics like “Take It or Leave It” that audiences didn’t seem to notice. But, to keep in the realm of an “explosive performance”, fireworks set off during the band’s encore cut of “Last Nite”, igniting the park and the city in a dazzling array of lights — by far the highlight of the performance, and possibly the night. It felt like a great summer evening, maybe even the Fourth, but, in reality, it was just a really solid St. Patrick’s Day fiesta. It’s hard to explain, though. KO! -Michael Roffman

The Strokes // Gallery by Cap Blackard

There’s something almost transcendental about Portugal. The Man’s music. The fact that it’s prog-gy/experimental aside, it has to be the the especially grand yet wholly intimate ambinace they labor over, the emotional openness and vulnerability the readily display, and the fog. Yes, at their gig at Headhunter’s, as a part of AOL’s party, the rockers were bathed in an unusually high amount of fog as they tore through an hour-long set. While nothing says good rock music like a boatload of fog, even without the fake white smoke the band’s intense instrumentation and airy nature make for one heck of an experience, one that is exponentially better whilst standing in a field surrounded by hundreds of other people. Sure, that could be said of a great number of bands, but nothing felt quite as perfectly staged and as equally glowing then this outing. Although, that could be the fog smoking. -Chris Coplan

In a weekend literally filled with uber talented acts that completley disassociate with their audience thanks to their nerves or that they’re a group of awkward white kids, Charles Bradley is the unstoppable force and dynamo of energy who grabs audeinces by the heartstrings and pulls them into his soulful, R&B-driven world. Discovered doing James Brown covers in Brooklyn before readying the release of his debut album (which is out now), Charles Bradley takes his years of world experience (his brother was murdered and he was a chef  in California) and spins yarns about social change and broken hearts (not to mention a mesmerizing cover of Neil Young’s “Heart of Gold”) with one of the more gripping funk-inspired vocal performances you’re sure to ever to hear.  With the consciousness of Otis Redding and the sex appeal of Brown (his hips were almost as inspiring as his singing), Bradley stands triumphant on the sounds of his backing band, The Menahan Street Band, and pulls you into his Universe.  And guess what?  You can’t ever get enough. -Chris Coplan

Where do you start with TV on the Radio’s inaugural SXSW ’11 performance? A good starting point is actually song two of their set, “Wrong Way”, in which the band transformed the chugging two-step into flaming ball of arena rock. Now, a ballast of area-rock from a band who up until recently only dabbled in those kinds of anthems might seem suspect. And in retrospect it is — all the lovely subtlties on their record were definitely muddied by the wall of energy the band flung into the crowd. Perhaps they’re taking cues from their new material, which was showcased a little more last night with “Will Do” and another new song. Whatever the case, for every small disappointment with their abscense of their stark atmospherics, there’s a multitude of praises for their commanding and wild headlining set at Stubbs last night. Tunde Adebimpe is an engaging frontman to watch because he lives in the words that he’s singing, embodying them with gestures and physicalities, but never making it seem theatrical. “DLZ” was certainly a highlight of the set because it maintained its brooding nature whille still having enough oomph to get the crowd engaged. If TVotR are headlining a festival this summer, they deserve it. -Jeremy Larson
——