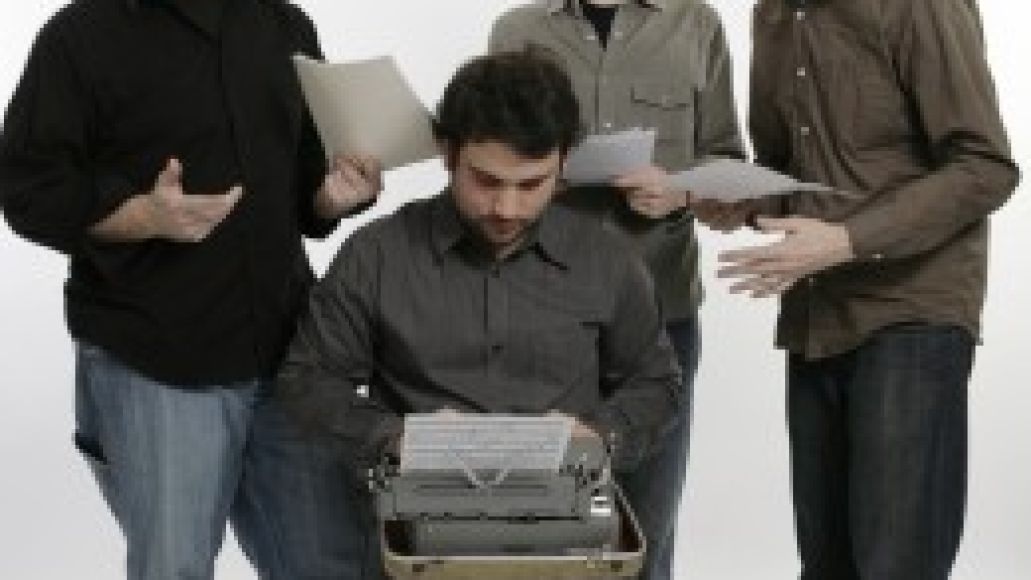 As the closing concert of the Kaufman Center’s Ecstatic Music Festival – a series of concerts dedicated to the intersection of pop and classical worlds – drummer/percussionist/composer Bobby Previte has written five pieces for improvising soloists. Drawing from multiple pop genres, the versatile Previte has everything from the jazz keyboard fireworks of John Medeski to the turntable virtuosity of DJ Olive. Holding these five works together is So Percussion, one of the hottest groups playing contemporary music in the U.S. today.

So Percussion seems to be everywhere this Spring. After a sold out show with Dan Deacon in January, the group has played around the country, will play Stravinsky’s Russian masterpiece Les Noces and a work by Ligeti with the L.A. Philharmonic, and then make their solo debut at Carnegie Hall during a blowout celebration of Steve Reich’s 75th birthday. In the midst of rehearsing for Monday night’s concert, Jason Treuting, Eric Beach, and Josh Quillen (the fourth member, Adam Sliwinski, was practicing with one of the soloists) sat down with me near their Brooklyn, NY, studio to talk about Bobby Previte, improvisation, how excited they are for Monday’s show, the baggage that comes with playing “classical” percussion music, and bullwhips.

Josh Quillen: Yeah, he wrote five percussion quartets with the idea of them all being written out music that would involve an improviser. So we learned these parts that aren’t really improvised, and then at the last minute we’ve been rehearsing with these improvisers. I think he’s had them in his head the whole time while he was writing them. Bobby’s playing on one of them, Jen Shyu is playing this thing called a moon loop and she’s singing as well. John Medeski is playing, DJ Olive is playing, and Zeena Parkins is playing harp. It’s been really cool to work with Bobby on this stuff.

Jason Treuting: When we rehearsed with Medeski for the first time, I remember showing up to rehearsal and I hadn’t really though about what that moment was gonna be like. Once he set up, it was like “holy shit, we’re playing with freakin’ John Medeski right now!

So when you say that he wrote the parts that you’re playing with the improvisers in mind, were you conscious of that while rehearsing? Like, this is the Medeski piece, this is the DJ Olive piece?

Eric Beach: Yeah, I think that he’s had such long relationships with a lot of these people that he has an idea of their musical personality, and that makes a lot of sense to me especially as improvisers. I think there’s a real strong sense of what kind of improviser a person is, like what kind of playing you’re going to expect back from them, in a way that’s maybe very different from classical music where there’s a sense of “can you execute it or not?” Improvisers immediately have a personality to their playing, so that’s what Previte had in his head when he was writing our parts.

Quillen: It’s more of a lead sheet than what we have, but, they’re reading charts too. For Medeski, I think Previte has some stuff written out for John to play, but then there’s a lot of chunks that are open.

Treuting: I think the conception up front was definitely these kind of through-composed percussion quartets with improvisers, but, like in Bobby’s concerto, there’s a lot of really open, not “notes-on-a-page” passages. We find that a lot in classical composed music, whatever that is these days; it’s a blurry mess, rarely is every note written down and rarely is music freely improvised anymore. Most often times it’s somewhere in the middle. But I think that’s just where Bobby comes from, too. So the improvised music is a little more composed than I would have thought, and our composed music is a little more improvised.  A sound will be notated, or a vibe will be notated, or all the notes will be notated. A lot of the people in the Ecstatic Music Festival, and a lot of the people we’re working with, they figure out how to get their music across in a way that works in that moment.

Beach: I think it’s interesting to think about how all composed music exists on a spectrum of control or lack of control. In what we think of as classical music, you can’t control every single thing that people do. There was the idea of performance practice, or “if I write it like this then people will know what I mean.”

I think it’s interesting that these are concertos, which was the original space in that repertoire for improvisation.

Quillen: And Bach wrote figured bass numbers underneath his organ music so that you could interpret it in different voicings. I think the thing I’ve been surprised the most with Bobby is how he’s dealing with writing music for a percussion ensemble with all this gear. We come from a tradition that, often times in the wrong hands, that can go horribly awry, and can be very “percussion ensemble-y…”

Treuting: Check out all the sounds I can play!

Quillen: Exactly. And you look at the stage and there’s a lot of stuff up there, but I think Bobby’s ideas are so strong, and he commits to them in such an unabashed, unquestioning way. He just goes there and doesn’t hesitate.

Treuting: The setups are huge; what we’re playing is a lot of different sounds. I think one of the cool things about it is he’s kind of jamming styles, and sounds, and vibes – a lot of stuff – into 70 minutes of music. It goes to a lot of places.

Beach: The coolest thing about Bobby is that we’ll be playing something and he’ll be like  “No, no, it needs to sound like this” [makes percussion noises with mouth]. When he sings his music, or when he describes it, Bobby is possibly the most high intensity person I’ve ever met. When he just describes it, you can immediately pick up on what he’s talking about. Things exist in his head like that in a really serious way. There’s definitely a part where Josh is going to be using a bullwhip onstage…

Quillen: And screaming like in a Wild West movie…

Beach: …and when Bobby was describing the bullwhip sound, it was almost like, maybe Bobby should just sing the noise!

Quillen: So Jason’s playing the washboard, and I have a whip, and I’m whipping…which should not work, like, that shouldn’t exist in a way that somehow is cool. And yet, the way Bobby deals with it, it just works. When it’s done right and you commit to it, it sounds really badass.

Beach: Bobby’s always been the dude that, people know that he can do kinda everything. He’s the drummer who’s also a percussionist and therefore can do whatever somebody wants. That John Zorn/Ennio Morricone album, on the “Once Upon a Time in the West” portion of it, Bobby is the one doing the “hee-yahs” on it, he’s just that kind of dude.

Treuting: Yeah I didn’t realize a lot of the things that he did, but he played on this Tom Waits album that I really love, Raindogs. Bobby played all the bass marimba stuff on that, and in Zorn’s band he was the original Cobra conductor. I knew the scene he was in but I didn’t know the specific stuff that he did that was just awesome.

Beach: He was telling us stories about this place called the Mud Club that he used to play. It would be a dance club all night, and then they would do a concert at dawn after people had been dancing all night and they’d stick around for it. So him and Elliott Sharp would load into this totally seedy club in the East Village at like five or six in the morning and there was a garage door that would come up and everyone who was dancing all night and was already wasted would sit for an hour. 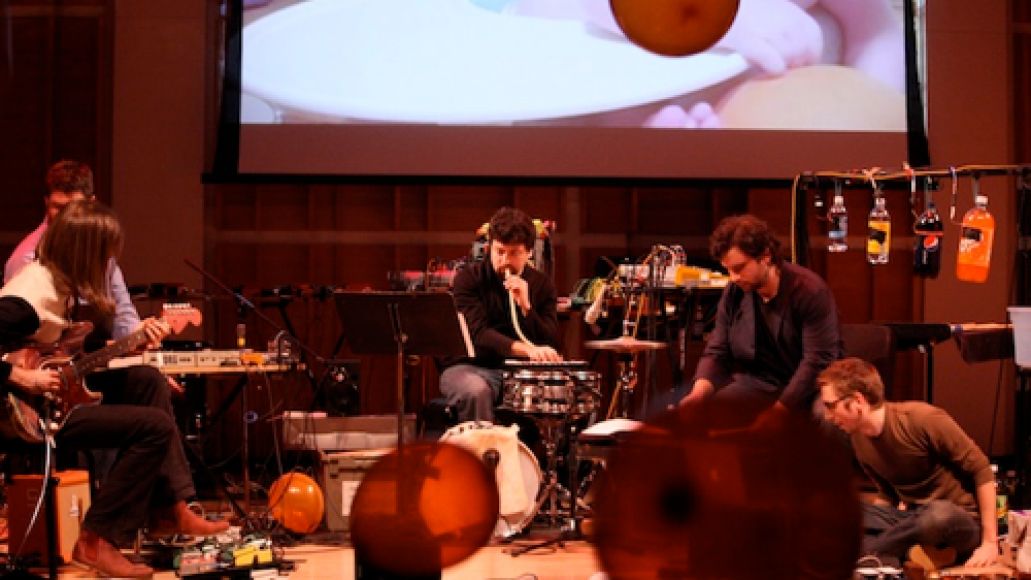 So he doesn’t see any distinction between the pop side of things and the classical side, if there is such a thing?

Treuting: I think that the role he has in the pop world is very awesome, but peripheral. He has plenty of bands that tour that are more in that scene, in some way, but mostly it’s instrumental music anyway. Like Medeski’s relationship to the pop world, it’s already kinda peripheral.

Do you feel like you’re supporting a soloist in these pieces, because that’s sort of the traditional role in a concerto? Or is it something different?

Quillen: Rehearsing these things, it feels like there’s five parts, and one of them just has more notes. The improvisers are really good, but there’s never really a moment when we’re comping chords while the soloist plays over changes. It’s all woven together pretty tightly.

Treuting: It’s very fluid, there are a lot of different combinations, duets, and we have solos too.

Quillen: Every movement has its moment where it’s just rockin’, four on the floor.