A friend once explained that The Ex are Amsterdam’s version of Sonic Youth (though The Ex do have the chronological edge by two years, dating back to 1979), namely that they started out in art-punk before branching out into things like jazz and noise, improvising and collaborating with dozens of musicians from dozens of places. The two even put out an album together, 2001’s In the Fishtank 9. The difference, though, might be that The Ex are more keen on international influences, whether European folk songs or traditional African song structures. Their varied, eccentric live show at Chicago’s Lincoln Hall further solidified that difference.

Chicago free-jazz saxophonist/living legend/MacArthur Fellow “Genius Award” recipient Ken Vandermark headed off the night with an early set, followed by another Chicago outfit, Follows. The group’s droning metal stylings went over fairly well, forcing a few more people off of the bar stools just outside the hall and into the room. Dressed entirely in black, the four-piece ripped through tracks like the thundering “Dark Moscow Day”, vocalist Mia Clarke clawing at her guitar. Unfortunate snare drum issues left a blank space in the middle of the set, resulting in over-long guitar noodling and awkward silence. 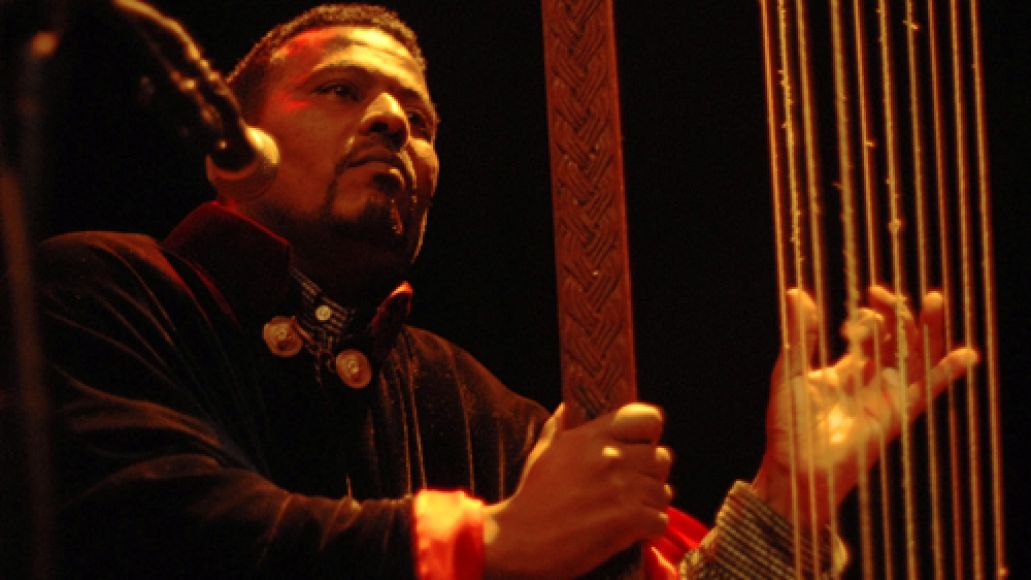 Ex vocalist Arnold de Boer walked onstage just as Follows finished to a serious round of applause, giving a quick thanks to the audience, and introducing the next act, Zerfu Demissie. “He’s from Ethiopia,” de Boer smiled, “but he lives here now.” Demissie, he explained, plays the begena, or the Harp of King David, which turned out to be a five foot tall, ten-string harp that droned like a synth set on inner tube. Originally exposed to the world by Ex guitarist Terrie Hessels’ Terp label, another example of Ex’s mission to bring “world music” to the rest of the world. Demissie’s shallow, evocative voice monotoned out phrases, alternating on high or low notes over the constant, droning bunches of notes from the begena.

The crowd that had respectfully, if unenthusiastically (except for the one guy full-body dancing through the room), looked on during Demissie’s set erupted as de Boer, Hessels, guitarist Andy Moor, and drummer Katherina Bornefeld entered cheerily, waving around the room. “And then we are The Ex,” de Boer grinned before the three guitarists chopped into “Tree Floats”, the first song of an almost entirely Catch My Shoe based set. The older-skewing crowd got some serious head-banging in from the start, a few bobbing and weaving in time. The song fell into a messy, chaotic bridge as Hessels grabbed a drumstick from Bornefeld, scraping it maniacally at his guitar.

The four-piece seemed to be enjoying the set just as well as the crowd, thanking everyone frequently, chuckling and smiling back and forth among themselves. de Boer skipped in place during “Cold Weather is Back”, guitar swinging at his side, while later he and Hessels smirked as they ripped through a call and response solo on “Double Order”. 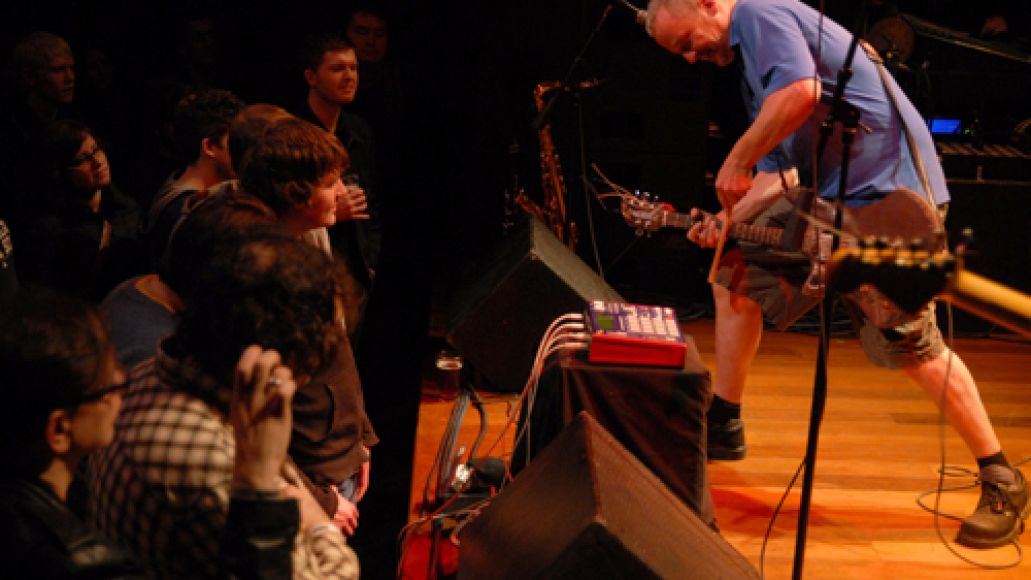 “For the next songs we have the amazing honor of playing with Ken Vandermark,” de Boer gleefully announced, bringing the saxophonist back on stage. Vandermark’s baritone added some bassy punch to “Bicycle Illusion”, playing alongside Moor’s throbbing, bassy guitarwork, giving it an almost reggae feel. His switch to clarinet for the traditional Ethiopian tune “Eoleyo” added a layer of warbling moan, to the frenetic, intense rhythm. de Boer’s synth refused to operate during the song, so he apologized later, adding that the bass part he was supposed to be playing “went like boom  ba bom bom…Now just imagine that for the last five minutes.”

The ferocious, thumping “Maybe I Was the Pilot” came next, Vandermark providing the horn parts on baritone sax, de Boer and Hessels tapping synth keys with the headstocks of their guitars, Bornefeld providing one of the better rhythms of the night (even almost every one was superb). The farewell before the set’s last song was endearing, garnering a lot of hollering: “Last year we played here with Shellac,” de Boer glowed. “We had some good food, some good beers, it was great.” Catch My Shoe‘s concluding track “24 Problems” closed the set out, de Boer rabidly howling out the chorus. Every utterance of “catch my shoe, watch my shoe” was as wild-eyed and intense as the last, leading to a serious level of smiles throughout the room.

The quick encore featured a reworking of a Hungarian folksong with Bornefeld up front on vocals and cowbell, Moor, Hessels, and de Boer slicing out a rhythmic backing, Vandermark taking a mournful, wailing clarinet solo. “Shall we play one more?” de Boer asked before announcing a cover of Congo’s Konono No.1, the droning thumb-piano driven original updated with distorted, chugging guitars. The wildly original, far-reaching night had come to an end on a unique note, one that seemed to go over just as well as any of the group’s punk tracks.