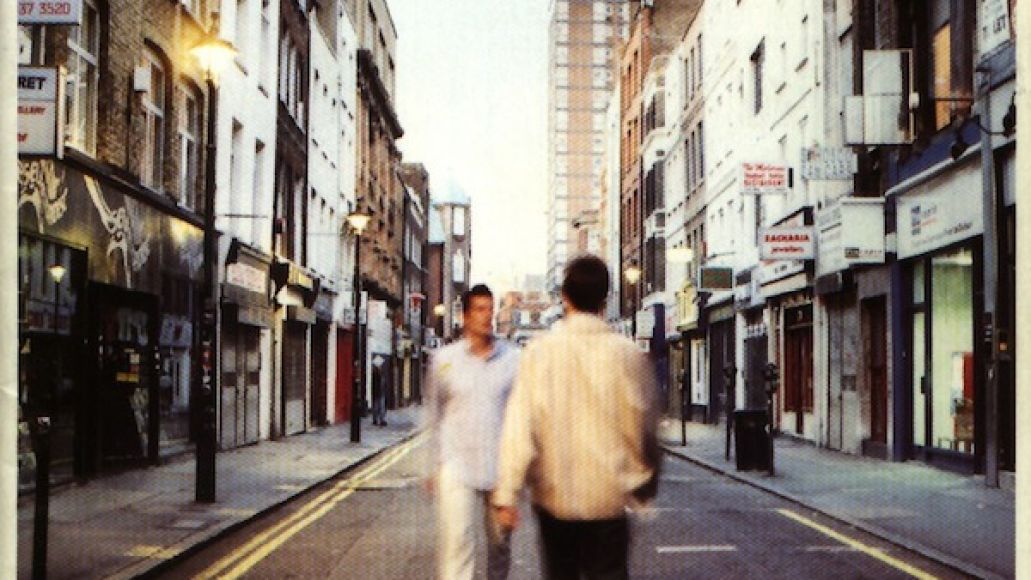 Liam and Noel Gallagher do not get along. It’s well documented and not worth going over in detail again. However, all that turmoil and bad blood produced some pretty amazing music in the ’90s, and even their final disc, 2008’s Dig Out Your Soul, had its moments. This band came onto the scene in ’94 and blew everyone away with their debut, Definitely Maybe. Their popularity rose to new heights quickly and then calmed around the millennium. Finally, the past few years showed resurgence in the public’s respect for the band, which never entirely went away, but those earlier albums reminded us of just how great and influential this band was, especially abroad.

For many, Definitely Maybe was the second Oasis album they heard, as it did not get much radio airplay in the states. It was the smash hit “Wonderwall”, off of the 1995 smash-out-of-the-park album, (What’s the Story) Morning Glory?, that turned our collective attention to Oasis, and most of us never turned back. Liam’s voice sounded perfect and smooth, as opposed to the worn out, scratchy, cigarette- and booze-ruined howl that accompanies his live performances now. As advertised, this was a new generation’s Beatles. Obviously, they were nowhere near able to live up to that hype, but they were the closest thing since, and they were selling albums and tickets about as quickly as their predecessors.

To compare them to the Beatles is both standard and ridiculous, however. Their impact on music from this album alone is certainly worth noting. Half of this album was released as singles either in the UK or the United States. “Roll With It” and “Some Might Say” were huge hits in the UK but did not fair well here in the States. On the other hand, “Champagne Supernova” was not even released as a single in the UK, and the song arguably could be called the best song of the ’90s. This track has an unbelievable way of taking you on a journey that is both nostalgic and new upon every listen. It is the perfect track to close out this record-breaking album that went 4x Platinum in the United States by 1996. It wasn’t grunge, and it wasn’t hard rock; what made it so appealing was how unique it was. Oasis had a different sound from other acts at their time, and with almost every song on the album being single-worthy, they deserve the lofty comparisons.

Perhaps the best non-single track on the album is the sweet and poppy “She’s Electric”. This song is very simple, but amongst the sweeping other tracks surrounding it, it gets lost in the shuffle. Its simplicity is welcomed, and it’s a delightful pick-me-up after the very slow and eerie “Cast No Shadow”. This album is full of flawless guitar solos and riffs, but these two tracks are so uncomplicated that they can get misconstrued as being “less than” the others. Noel has always been great at writing love songs and Liam equally as great at singing them. The lack of attention these songs receive only makes them better.

During the band’s final tour in 2008, they would perform a stripped-down acoustic version of “Don’t Look Back in Anger”;  it gave the song an even sweeter feel than the original. Of all of the tracks in the Oasis catalog, it seems that when this one starts, whether it’s on the radio, live, or on album, whomever is within an earshot will begin to sing along (also, great for karaoke). Noel Gallagher was the heart of Oasis. Sure, he has his moments where he says something completely stupid and awesome at the same time, but put him in a studio and give him a guitar, and he will make gold. His voice fared much better than his brother’s and, because he was the one who wrote most of the songs, it sounds much more personable to hear him sing them. Oasis has kind of a “Wizard of Oz” complex in that the man behind the scenes was the one doing all of the work, while Liam was strictly the face.

This is the Oasis album that is essential to have, not only because it’s the band’s greatest in their collection of discs, but for its prominent place in pop culture. This album was huge, and even though it sold well, it has at times been underrated when ranking the best ’90s albums. Very few complete albums could create as many radio friendly songs as Morning Glory. When looking back on the ’90s, Nirvana and Pearl Jam usually take away the top spots for best albums or songs. No taking away from those bands or their work, but if you listen to Morning Glory again, you may realize it belongs in that discussion more than you thought before. It is the perfect blend of rock nostalgia, and it deserves its due.