Disclaimer: It’s daunting to try and encapsulate in words the impressive insanity that is OFWGKTA . We advise you take any and every chance to see this live for yourself. Also, to add a pinch of performance anxiety to the already daunting task of a live review, Tyler, The Creator is quite aware of the hype he’s been getting, and not all of it pleases him. Here’s an excerpt from verse three of “Yonkers” – “Oh! Not again, another critic writing report. I’m stabbing any blogging faggot hipster with a Pitchfork.” Clever, right? But since I may fit into the “blogging faggot hipster” category by default, it makes me a little nervous to say what I’m about to say, even though I have only the best things to say about the gritty LA rap crew. But I’ve considered my options fully. Either I get stabbed with a pitchfork, or I neglect to tell you about the best rap show I’ve seen in a long time. I’ve chosen the latter, as I feel it would be irresponsible of me to not spread the word.

As the masses assembled outside Pomona, CA’s Glass House, it was unclear who was the dominant force; the fortunate ticket holders or the desperate unlucky – frantically searching for any signs of a last second way in. The LA youth were scouring the lines for any extra ticket whatsoever while those who had been lucky enough to procure one anxiously awaited to be let in the venue. One thing was clear: this was the place to be. Unsurprisingly, it seems as though the SXSW mayhem Odd Future caused helped spread the word about these LA prodigies pretty effectively. This was their first show back from the hype, and it was fittingly done in their native LA area.

After a late start due to the venue being obviously over-capacity creating fire marshal concerns, DJ Syd The Kid took the stage to help pacify the increasingly agitated audience. And so began the next three hours worth of screams of “Swag!”, “Free Earl!”, and “Golf Wang!”. Syd could only keep the crowd happy for so long, however, as everyone was beyond anxious to see Tyler, The Creator and his crew throw down. 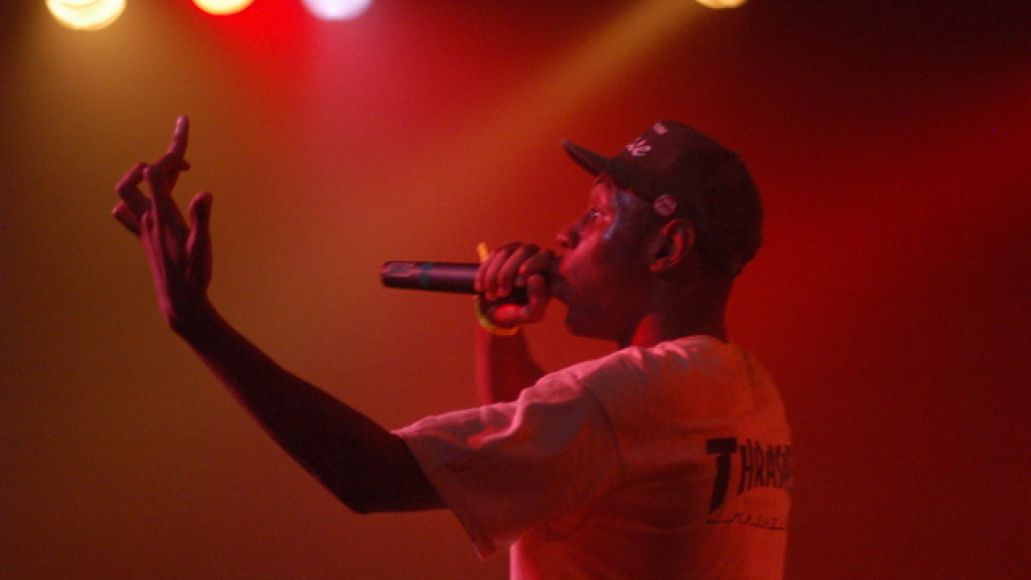 As Syd once again took to the DJ booth to begin the show, the crowd began to get violent, everyone jockeying for a better position to get a closer glimpse of Tyler as he took the stage. But apparently it wasn’t violent enough for The Creator, as he told Syd to cut the music until the crowd grew even more rowdy. He dared his fans, “This show sold out in one f***ing day and that’s all the screaming you got?” Instantaneously his audience rose to his spurring, and he emerged mask-clad, followed immediately by Left Brain, as they began to demand chants of “Wolf Gang” and “Free Earl”. From there the night just got more and more intense as more members became involved.

Hodgy Beats was next onstage as Syd cued “Sandwitches” for him and Tyler to throw down on. Neither of them missed a beat, and at the mark of the first yell-chorus, Tyler leaped into the crowd who were more than happy to catch him. The energy in the room was unbelievable just two songs into the set and with only three members onstage. Hodgy took over hype man duties on the next track as Domo Genesis took the stage and Tyler exited for what would be a costume change. Hodgy took a blunt from a member of the audience and lit up as he told Syd to cue up the fitting next track, “Rolling Papers”. Almost on command, the room filled up with smoke that was far from smelling like tobacco. More joints were thrown onstage, and more members of Odd Future lit up and passed them around to each other and to their sidestage entourage. Domo brought even more energy to the set as he finished off “Rolling Papers” and jumped into a portion of “Double Cheeseburger” with Left Brain pinch hitting for Tyler. At about this point, a fight broke out somewhere in the crowd and Odd Future encouraged the sheer violence, making security’s job very difficult. Security stopped the fight before an all out brawl ensued, but the boys looked pleased with the havoc they had just created. 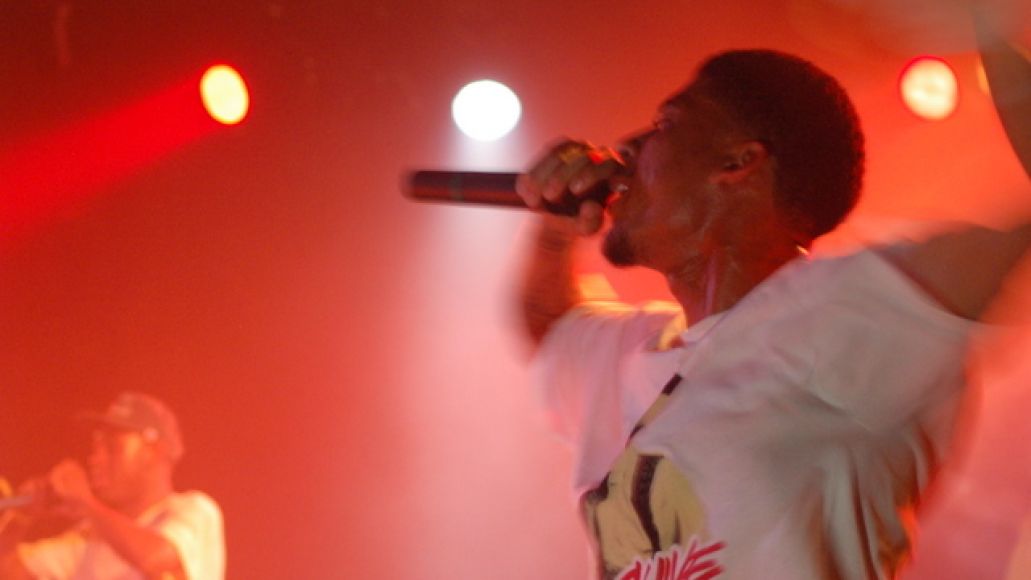 Next to hit the stage was the lesser recognized Mike G. But don’t be surprised if he’s the next to emerge into the limelight. The youngest member onstage took it upon himself to take the next two tracks all on his own while the others looked on (blunts still in hand). He let loose on his two tracks, and gave a shout out to Mos Def, who was more than likely somewhere in the house that night, as he was playing Paid Dues Festival less than an hour away the next night. It was only after a failed attempt at debuting a new track that Mike G handed over the reigns to a newly costumed Tyler, The Creator, who immediately went into a one two punch with “French” and “Seven”, both accompanied by all the members who had thus far taken the stage.

With the entire collective spitting and backing up Tyler and Hodgy on their verses in these songs, it became very clear just how these teenage kids had become one of the most talked about items in hip hop.

You remember when you and your high school buddies used to hang out after school and jam? And you felt like you were the coolest kids in school? And you had dreams about selling out The Hollywood Bowl? I’d be willing to be that 99.5% of you never had those dreams come remotely close to fruition, and that’s all it ever was: you and your friends hanging out and playing a little music. Odd Future is a little like that. Not the Hollywood Bowl part (although they’re reaching success none of us ever attained), but the hanging out part. It’s like they get onstage and showcase their afterschool hangout sessions. Fortunately, their hangout sessions are exponentially cooler than yours and mine, as they are all intensely gifted wrappers with a knack for unabashed deviance. It makes for a hell of a show. 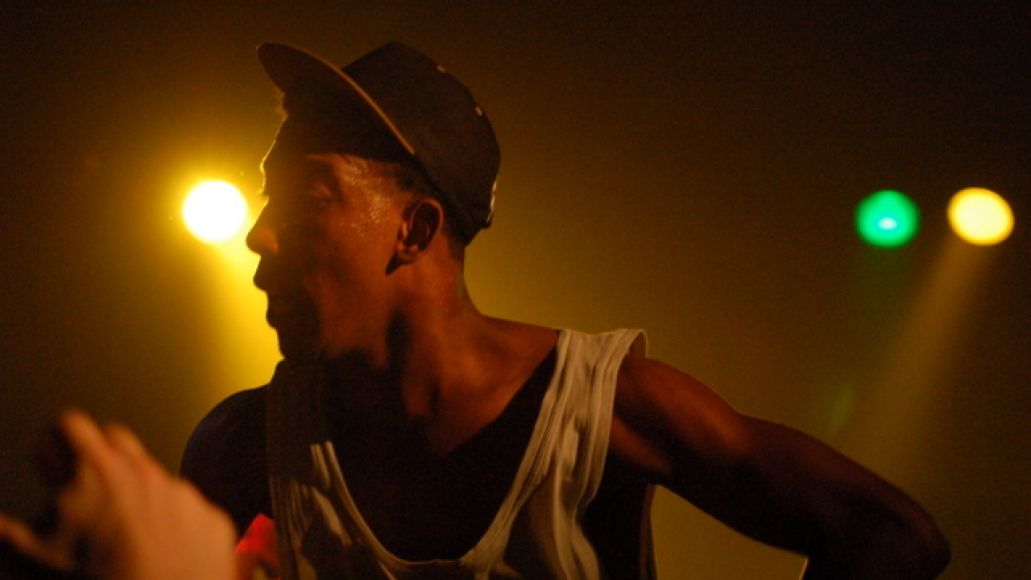 At one point in the night, a friend of mine leaned over to me and said, “It doesn’t really seem like they know what they’re doing.” He couldn’t have been more right and more wrong simultaneously if he’d tried. Honestly, it did seem like they had no idea what they were doing. More than half of the set saw the LA kids just joking with one another and debating which song to play next. It seemed as though they were flying by the seat of their pants most of the time. But at the same time, that’s what they do best. So, in a way, they knew exactly what they were doing: whatever came naturally to them.

The night peaked as Tyler threw out his massive track “Yonkers” and nabbed some scream-a-long audience participation. This seemed to cement the confidence of everyone onstage, and why shouldn’t it? They’ve taken the rap game by storm, and done it via the most useful tool available: the internet. Every shred of work they’ve put into their production has been from a place of sheer talent and enthusiasm for what they’re doing. Why shouldn’t they be confident about Jay-Z and Diddy fighting over the rights to them? That’s the ultimate compliment for a group of budding rappers. 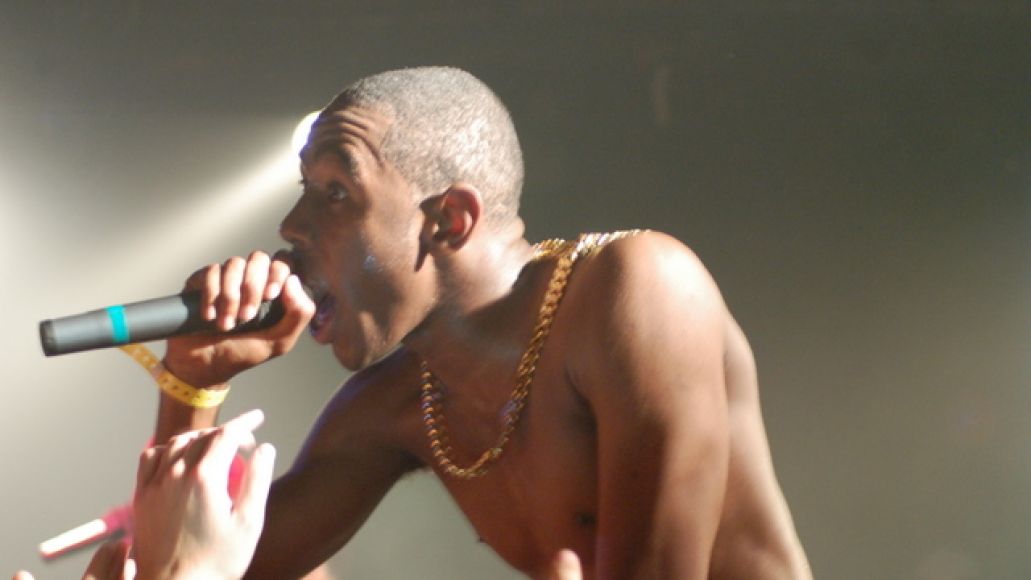 The night finished off first with a listening party dedication of the song “Earl” to Earl Sweatshirt, who is away at boarding school and couldn’t join his collective for this show, nor the whirlwind past four months that have brought Odd Future to where they are. Then all the members once again re-joined for their anthemic “Swag Me Out”, in which every artist took his turn behind the mic. Awkwardly, the show just sort of stopped happening as the performers left the stage slowly and one by one as they became less interested in doing endless shout outs and chant-starting. As the last of them left the stage, the lights at The Glass House came on and it was apparent that Odd Future wasn’t coming back out. But that was okay because everyone in attendance had just had a piece of history. Odd Future Wolf Gang Kill Them All may be erratic. They may be crude. They may be immature. But they are the future of hip hop.

Our recommendation? Believe the hype. Believe every single word of it.