Here’s a Rock Law for you: If a band loses its lead singer, hereafter that band ceases to exist. That band may tangibly exist, but abstractly and aesthetically, they’re done. They can change their name, or grab a new lead singer, even split off and splice together with someone else, but it’s rare that you see the rhythm section soldier on as an instrumental act sans a lead singer. Imagine if the Brothers Van Halen just kept jamming at The Roxy without David Lee Roth (mixed feelings, I know). No doubt, the departure of Battles‘ singer Tyondai Braxton will be a delectable hitching post for many critics’ reviews of Battles’ forthcoming sophomore release Gloss Drop — which is itself a strong step out of uncertain waters. But live, Battles have transcended this aforementioned made-up rhetorical device of a law exceptionally well, making some rad experimental rock lemonade out of the lemons they were left holding.

For better or for worse, it’s the Medeski Martin & Wood of avant-rock on stage. Battles have always been a band that asks listeners to focus and observe all their tiny musical eccentricities. Now more than ever, the trio had to capture the audience in a non-traditional, non-vocalist way — further blurring the already connotative meanings of “concert” and “show”. Opening number “Africastle” slowly turned the crank of the show (or concert), and just after the first signature synth tones were plucked, without a doubt it was made certain: Battles are still Battles. 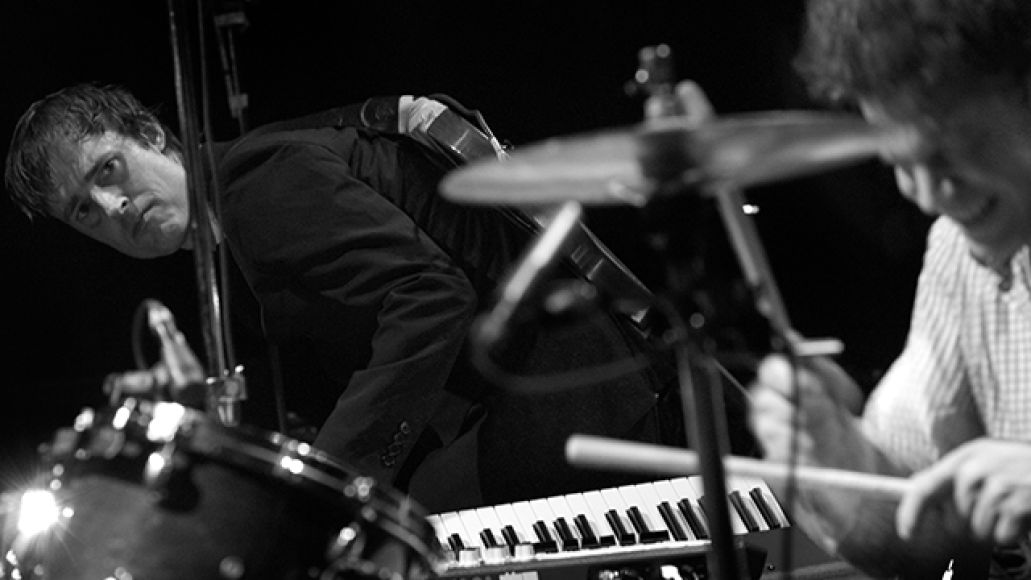 The three guys mine textures and patches and loops and sounds from some secret cache of untapped sonic resources and use those ideas as the building blocks for their songs. It’s confetti rock, and if you’re not locked in the gaze of the music it’s easy for it to become noise in the background. So it helped that Battles brought a handful of full of tricks to entice many in the audience who were unfamiliar with the exclusively new songs being performed.

Gloss Drop does contain some tracks with guest vocals on it, and Battles recreated those guest spots by projecting extreme close-up footage of the respective singer’s parts in the song. Kazu Makino of Blonde Redhead coyly cooed behind the band on “Sweetie & Shag”, experimental electronic artist Matias Aguayo led the crowd in the funkiest and and most rousing number of the night on “Ice Cream”, and Gary Numan, who couldn’t have looked creepier, was put on display for his part in the banger “My Machines”. Again, great lemonade to be sure. 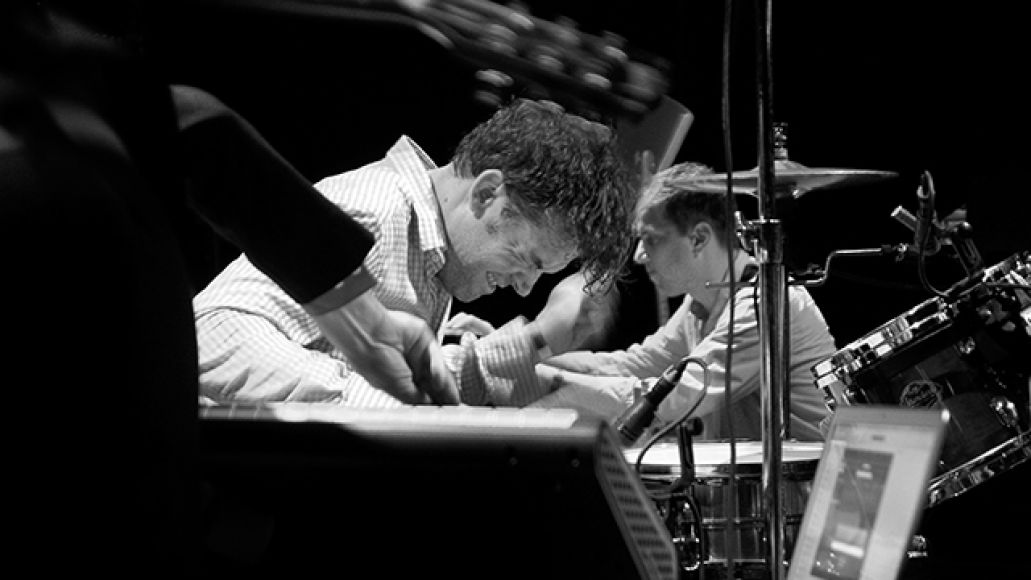 The background projections worked, because even if they did get Numan to show up and be creepy in real life, the Battles’ technical prowess and intra-personnel connections are what’s in the spotlight. With the two guitarists juggling copious loops and synths all set at various angles in their stations on stage, and the drummer placed front and center wailing on a crash cymbal placed  eight feet above his kit ostensibly for a fun challenge or something, the band never, ever left the pocket. They were the pocket. The symmetry of their compositions is sharp, and each edge was cut precisely where needed, all while creating thick, riff-based grooves that kept fans’ heads’ nodding and faces frozen on a look that can be best described as enamored disbelief.

Battles played not one song off of their first LP, Mirrored, and instead took the opportunity to showcase almost all of their forthcoming Gloss Drop. Under normal circumstances, this would be grounds for a riot, but Battles were grateful at the opportunity to perform these new songs for a sold out house at Lincoln Hall. Before the encore, guitarist Ian Williams got on a mic for the first time of the evening and thanked the crowd for being here. He said that they just learned these songs, which sure wasn’t evident from how confidently they played them, and sort of apologetically sidestepped around the fact that they weren’t playing any old songs. It was a bittersweet and honest little moment that cemented their choice to continue creating and performing without Braxton. Here’s hoping Battles continue being Battles no matter what.