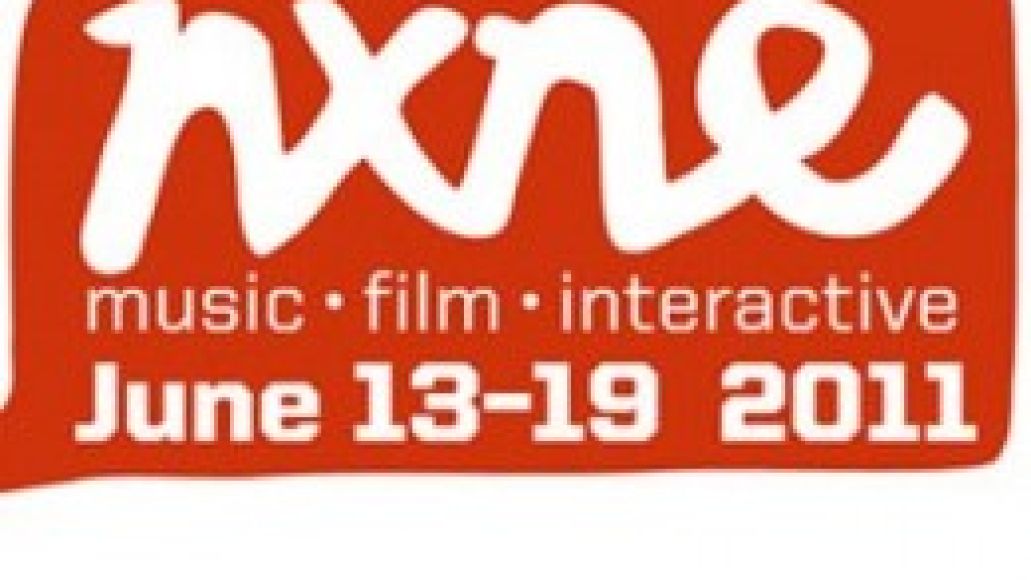 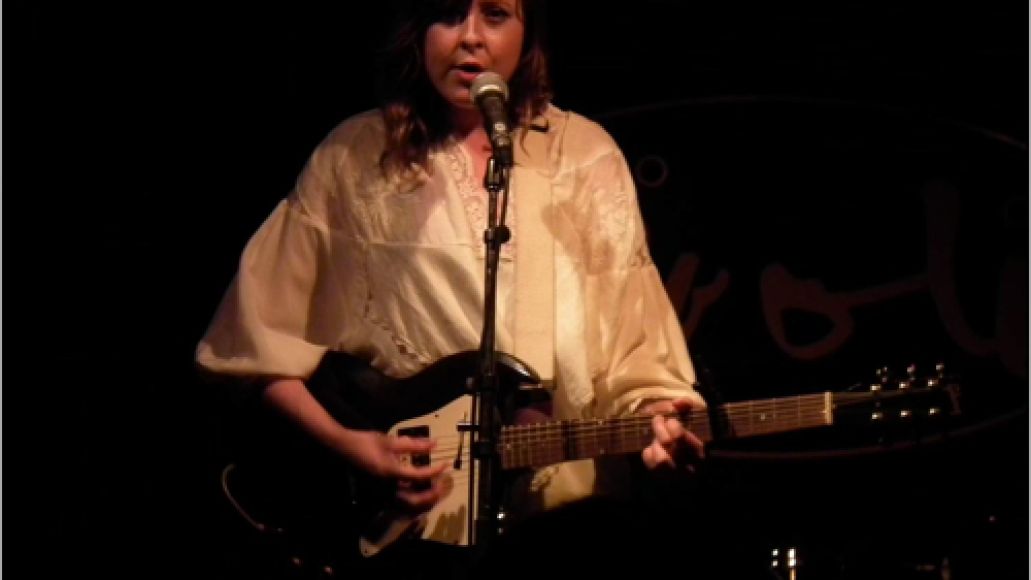 LOOM is the pseudonym of singer-songwriter Brooke Manning, performing solo for Canadian indie label Nevado Records. She has a minimalist strumming style to say the least, with an absolutely beautiful, haunting voice. In a way, she struck me as a bit of a female Thom Yorke, except without any trace of pretension. There was an especially cute moment where she covered ‘Tom’s Diner’ by Suzanne Vega; she forgot some of the lyrics, but made up for it quite entertainingly by having us jump to the universally familiar “Do do do do do do do do.” 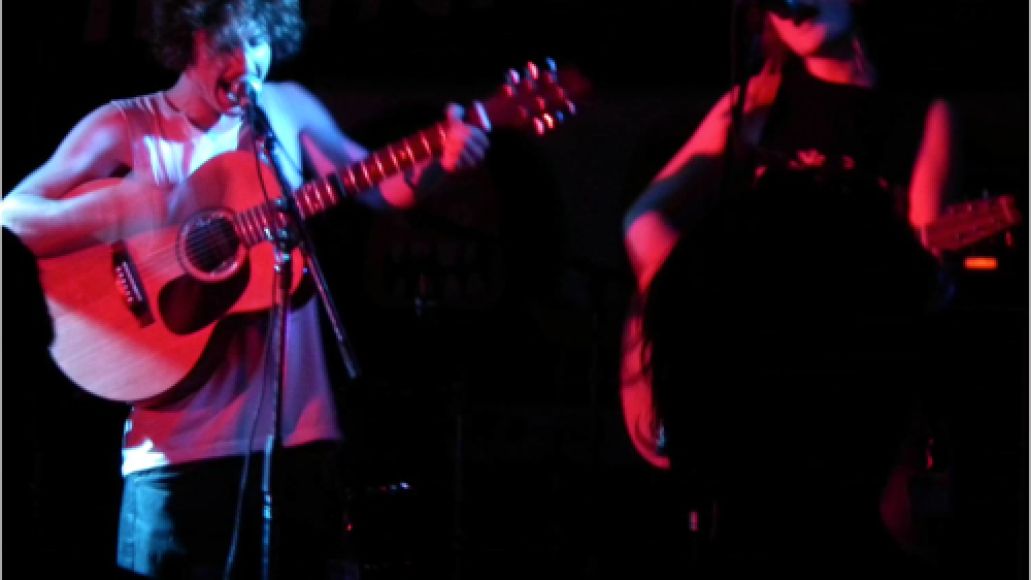 Moving over to Horseshoe Tavern, an eccentrically interesting trio calling themselves Moon King got the M for Montreal showcase underway, filling in at the last minute for Dance Laury Dance. It was apparently their first-ever gig, and they sure tried to grab people’s attention between periods of the Stanley Cup final with their absolutely booming dance-punkish drum machine and short, punchy material. “All our songs are like a minute and a half long,” stated lead singer Daniel Woodhead. When he wasn’t trading acoustic guitar riffs with his female counterpart, he was sitting cross-legged on the tiled floor in front of his band, or inviting those watching onto the stage like he was Noah and was saving them with his makeshift Arc. Like I was saying, interesting… 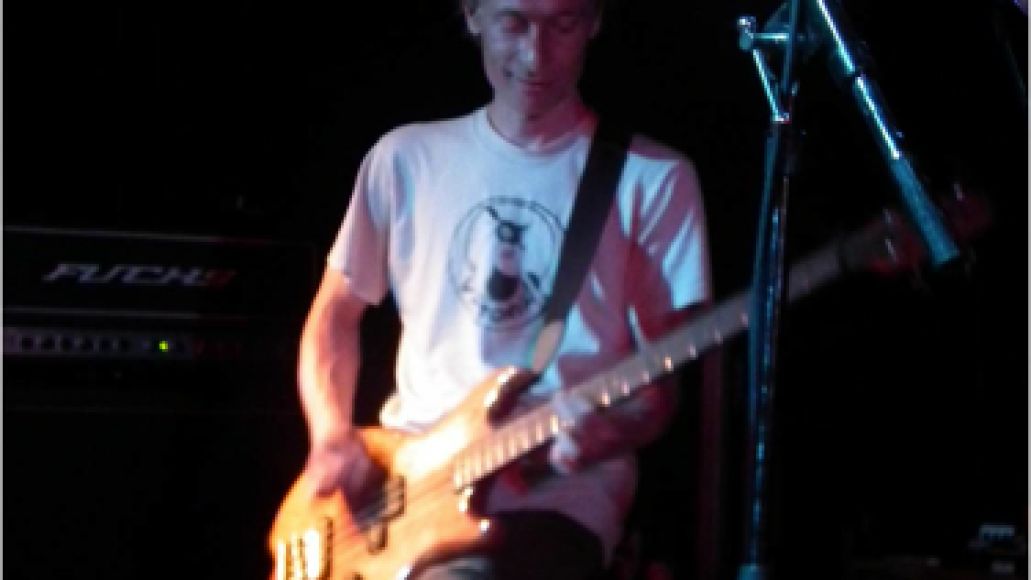 With Dance Laury Dance AWOL, O Voids became the first Montreal band to hit the stage. I’d describe their sound as droning post-punk that sounded more like it was coming from the gritty streets of New York City than from Montreal. Fans of Interpol would no doubt like them, but the hockey fans in attendance at the Horseshoe were more concerned about the Boston Bruins beating Vancouver for their first championship since 1972. Definitely more bodies along the lengthy bar area at the front of the club with their eyes glued to the TV than in back listening to O Voids, unfortunately. 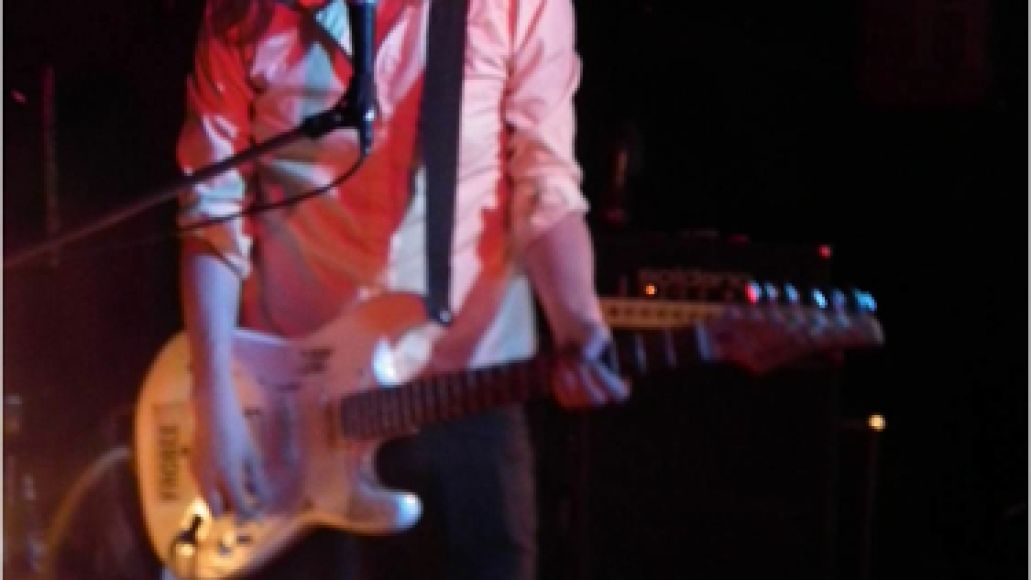 Parlovr may very well be the musical equivalent of the fries/gravy/cheese curds delicacy known in Montreal as poutine. No, it’s not the healthiest meal, but at its best, poutine is hot, sloppy, gooey, and so damn good, a real food indulgence. Parlovr, on the other hand, are three guys full of ‘joie de vivre’ who you want to treat yourself to again and again and again. They made everyone feel good, even those who wished they were rioting out in Vancouver, setting cars on fire. The suddenly jam-packed crowd were whipped into a dance frenzy by drummer Jeremy MacCuish, lead guitarist Louis Jackson, and keyboardist Alex Cooper, who sported a ratty old Quebec Nordiques t-shirt to mark the occasion.

A quick hockey rivalry lesson for you: Montreal Canadiens fans aren’t very fond of the Boston Bruins, but before they moved to Colorado in 1995 and became the Avalanche, there was one team Habs boosters loathed more than anyone else, and those were Les Nordiques! So it’s probably safe to say Parlovr were pulling for Vancouver to win… 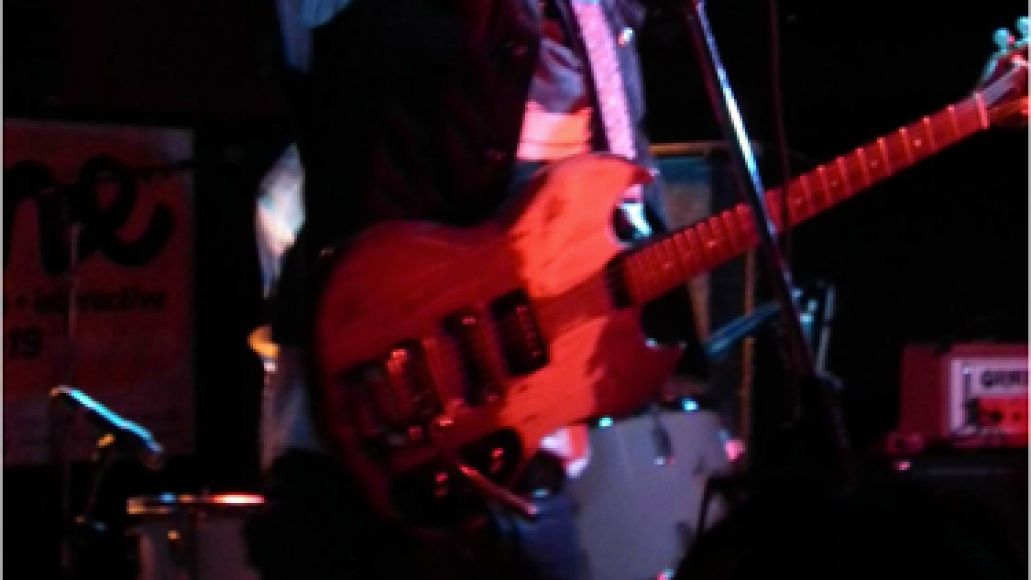 The last time I saw We Are Wolves, at Montreal’s Osheaga Festival, they came out wearing these gothic-looking, cape-like apparatuses. There were no gimmicks needed this time as they closed out the first night of music at NXNE – Not like the teeming crowd at the “’Shoe” cared anyway. They flocked to the front for the incredibly heavy, bass-driven industrial sound that characterized their entire headlining set. Wolfpack leader Alexander Ortiz reminds me of a chiselled Gene Simmons wielding his oversized bass guitar, elongated tongue wagging as he howls songs like ‘La Nature’ from their French titled debut, Non-Stop je te plie en deux (“I’ll fold in two”). Oh, and did I mention their drummer stands the whole time – Very cool! Forget Edward or Jacob, everyone left Horseshoe Tavern as Team We Are Wolves members! 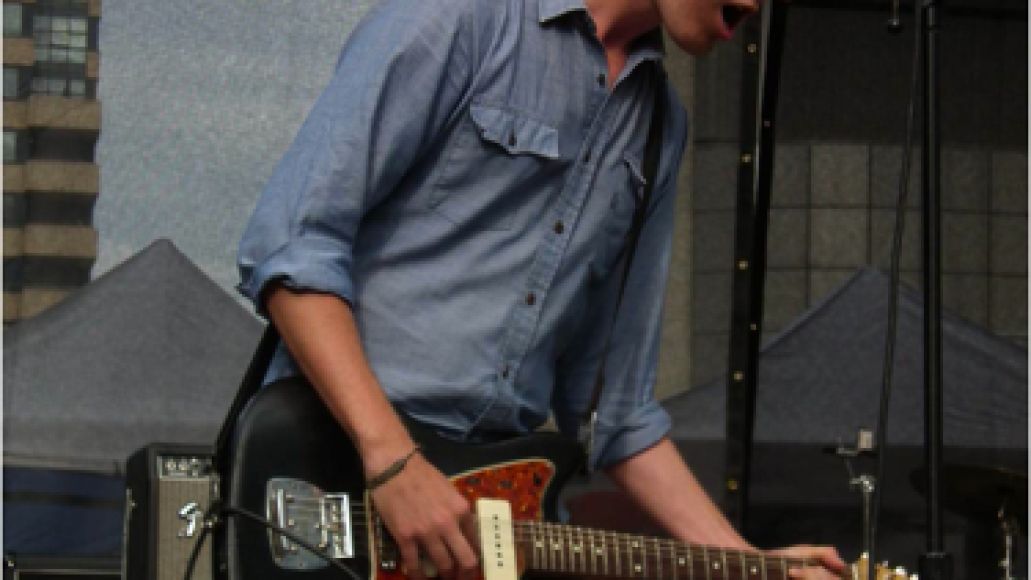 METZ had the honor of kicking off NXNE’s series of free shows at Yonge-Dundas Square in the heart of the city. And any pals of Fucked Up, who are fast becoming Canadian music royalty, are instant friends of Toronto’s fiercely loyal punk community. And as far as really loud opening bands go, they weren’t too bad, sounding at times like Bleach-era Nirvana (must have been the “swirling” guitars, or their closing number “Negative Space”, which brought “Negative Creep” to mind). And with his drooping glasses, their lead singer/guitarist looks like a young Rivers Cuomo had the latter chosen a more grungier path on his personal road of life. 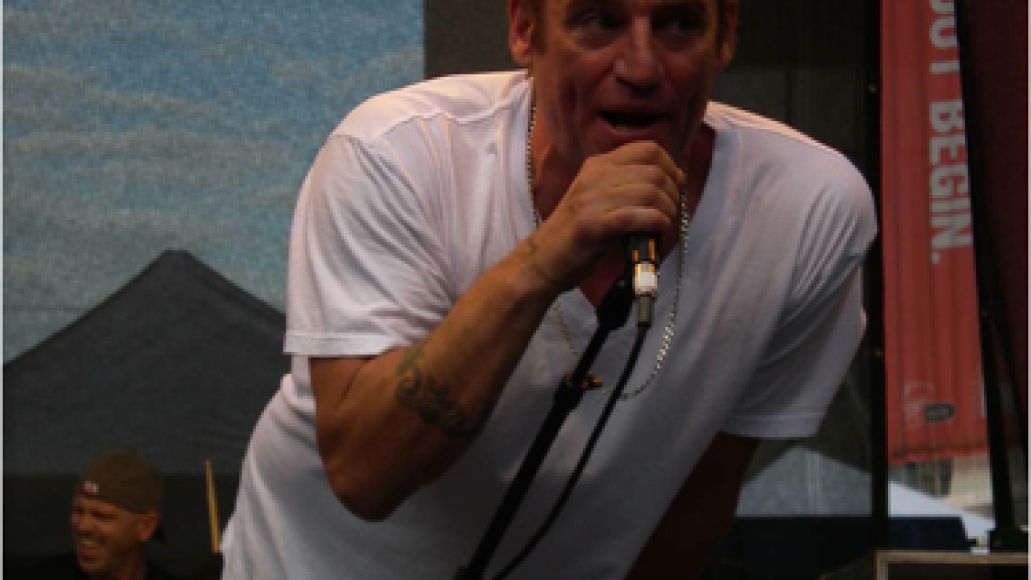 This is an open plea to today’s Canadian indie kids to not let their bands of the moment end up like Rusty, who were as awesome as it got in the mid-to-late ’90s but faded away in part due to lack of fan support. They surprisingly reunited for NXNE, and while they may be visibly older and different looking, they still rocked with the best of them at the festival, although it cost vocalist Ken MacNeil his voice after an “off the hook” second show in his summation at the el Mocambo Tavern Friday night. And according to a quick conversation I had with him, that’s it again for Rusty, so if you passed on them at NXNE, you missed out on something pretty special. 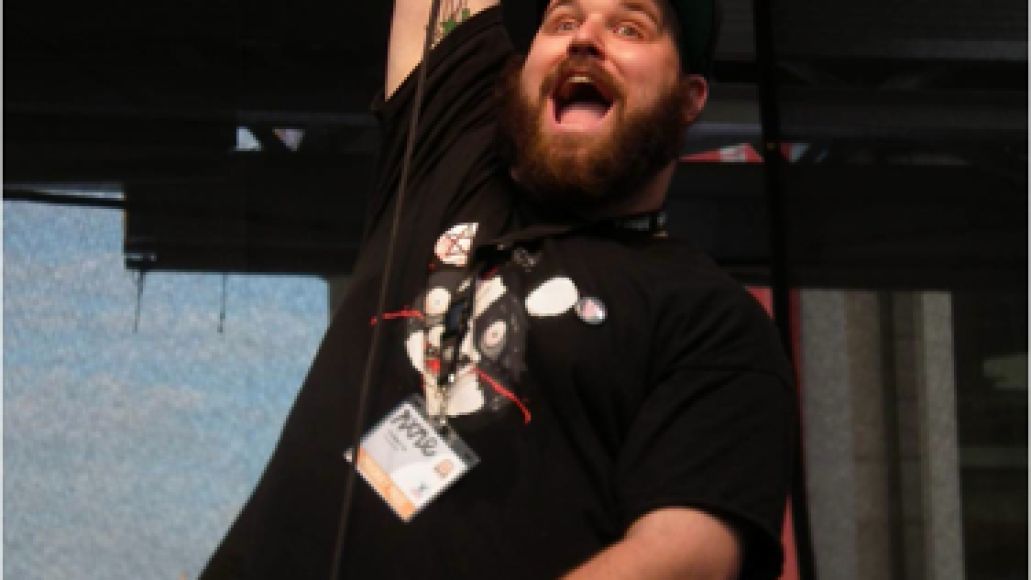 There isn’t a whole lot that’s “pretty” about Fucked Up frontman Damian Abraham. One thing you have to give him, though, is that he truly is a man of the people. By that I mean he loves to get his gargantuan frame up close and personal with everyone who came to see him. I didn’t time him, but he couldn’t have been onstage for longer than :30 seconds (which included showing his son Holden to the swelling audience) before charging the barricade, jumping into the now frenzied crowd, and spending the next 40 minutes body surfing, wrapping the microphone cord around his face, screaming songs from the band’s new album David Comes to Life at the top of his lungs, and even cracking a few jokes while not appearing winded at all. Simply incredible; I can only imagine the conversations he must have with his cute-as-a-button boy before concerts: “Wait here Junior; Daddy’s just going to go play in the human sandbox for awhile!” 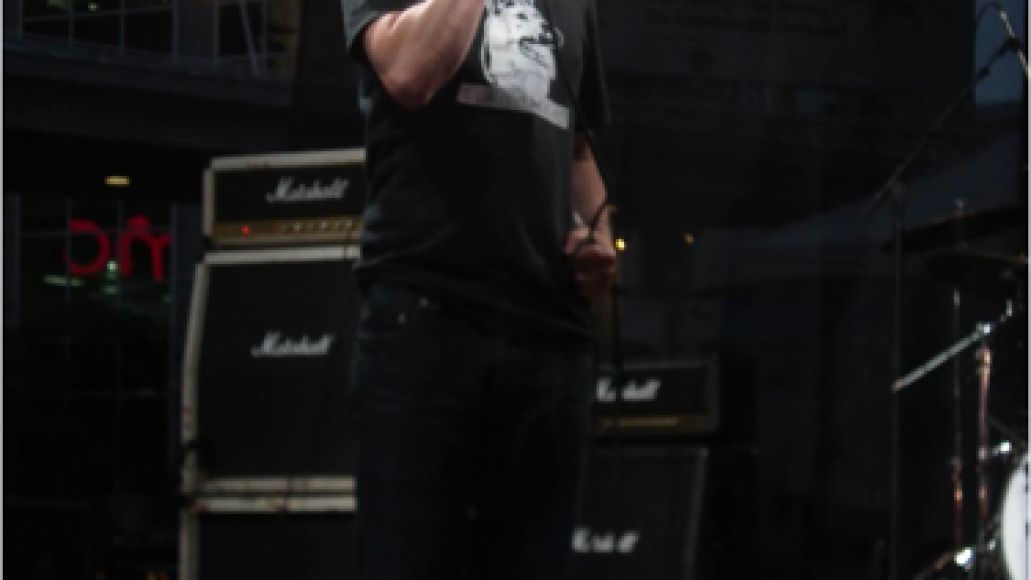 It would be tough for anyone to follow up the carnage left behind by Fucked Up, but if any band had the pedigree to keep the aggressive energy flowing, it was punk supergroup OFF!. Between their four members, they contain the DNA of no less than seven of punk rock’s most well-known outfits. Their set was equally short, probably because the longest song from their First Four EPs debut is “Poison City” at only 1:33. Former Circle Jerks and Black Flag singer Keith Morris probably protested more about the current state of American politics than he sang, but the Canadian horde seeing OFF! for the first time didn’t mind at all, courteously slam dancing along whenever they were given the chance. 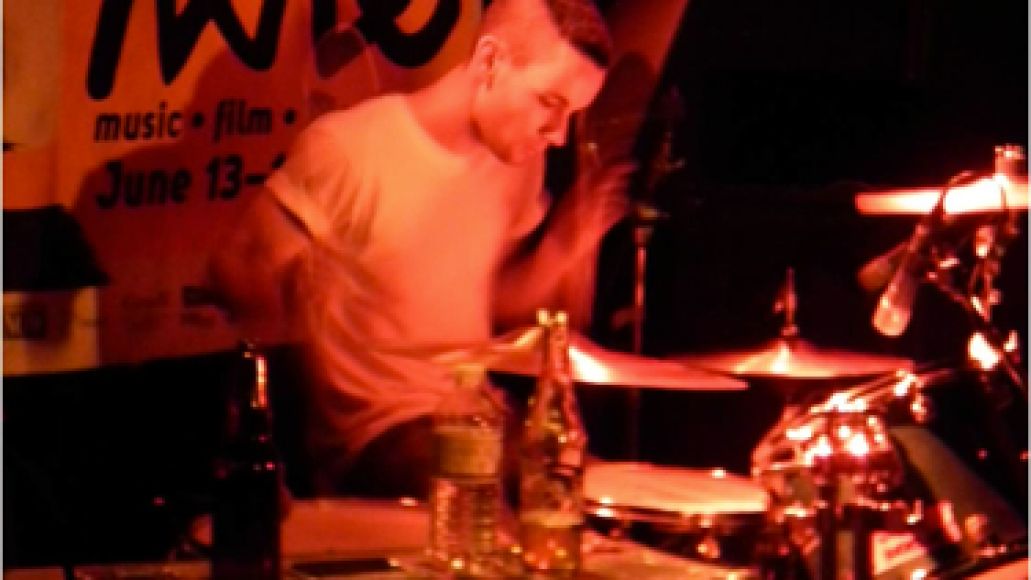 The City of Toronto apparently can’t handle the sonic fury brought by PS I Love You from their hometown of Kingston, Ontario. One song into their Windish Agency showcase at the Horseshoe, imposing guitarist Paul Saulnier blew out his amplifier, and at a surprise two AM appearance later at the el Mo, they blew a fuse! When all the gear did function properly, Saulnier proved that he can really play, with extended solos not typically seen from two-piece garage-type bands (Ben Nelson complements Saulnier on drums). Apart from his amazing axemanship, Saulnier isn’t above using screeching feedback to make our ears remember PS I Love You’s performance that much more the next day. 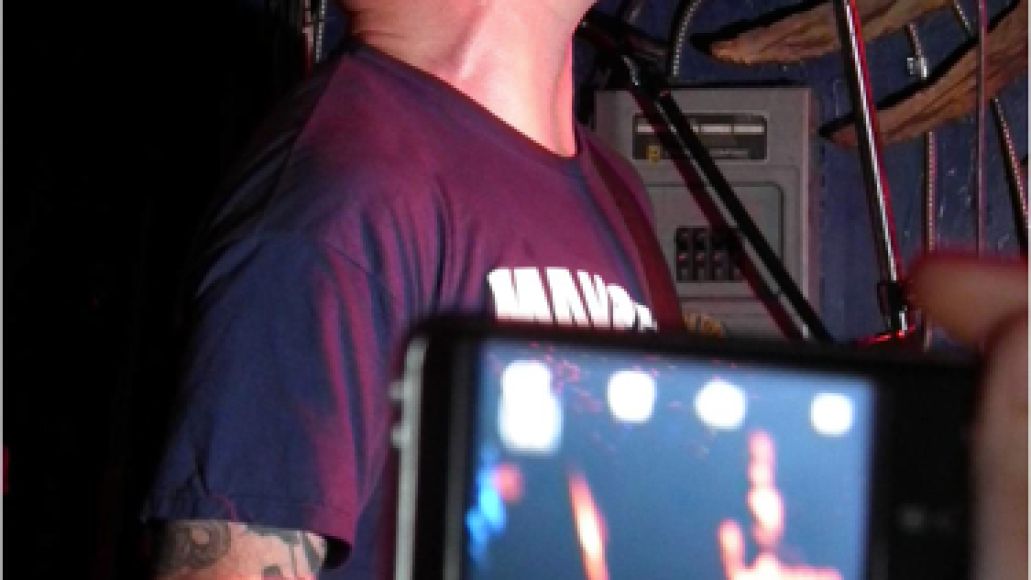 It’s an annoying overused term, but it really is the only one appropriate enough to describe C.J. Ramone’s late night NXNE set, and that is EPIC. Legal age Ramones fans young and old, male and female, stuffed themselves into the cramped Bovine Sex Club on Queen Street West to shout along to punk classics like “Blitzkreig Bop”, “Pinhead”, and “Teenage Lobotomy” with last-ever Ramones bassist C.J. as well as longtime band collaborator Daniel Rey on guitar. (Not to mention “1, 2, 3, 4” before nearly every song!) The end came far too soon for all of us, but not before we engaged in one last thrasharound to Rocket to Russia standout “Do You Wanna Dance?”.