Pearl Jam might have established him as royalty over in Seattle, but here in Chicago, there’s a special place for Eddie Vedder. Following an impressive, bare bones set by Glen Hansard, the scruffy frontman appeared alone on-stage, strumming the short 38 seconds of “Waving Palms” while the vintage red velvet curtain ascended towards the rafters. He didn’t mutter a word – at least not yet. Instead, he struck up Pearl Jam classic “Can’t Keep”, sticking to the uke and lassoing in the thousands of fans that sold out The Chicago Theatre. Minutes later, he mustered a smile, even amidst the dark, and finally broke his silence, stating, ”These songs may be sad, but I’m real happy to be here.”

Born in Evanston, IL, Vedder cherishes Chicago in the same way we cherish old family photo albums. We recognize their importance, but we realize things have changed – more specifically, that time has moved on. About a third into his near two hour set, Vedder took a long look past his fans and sighed. “I used to spend a lot of time in this room,” he observed, scoping out the Chicago Theatre’s lush, antique walls. “Back when it was a shit hole and I was a shit head.” 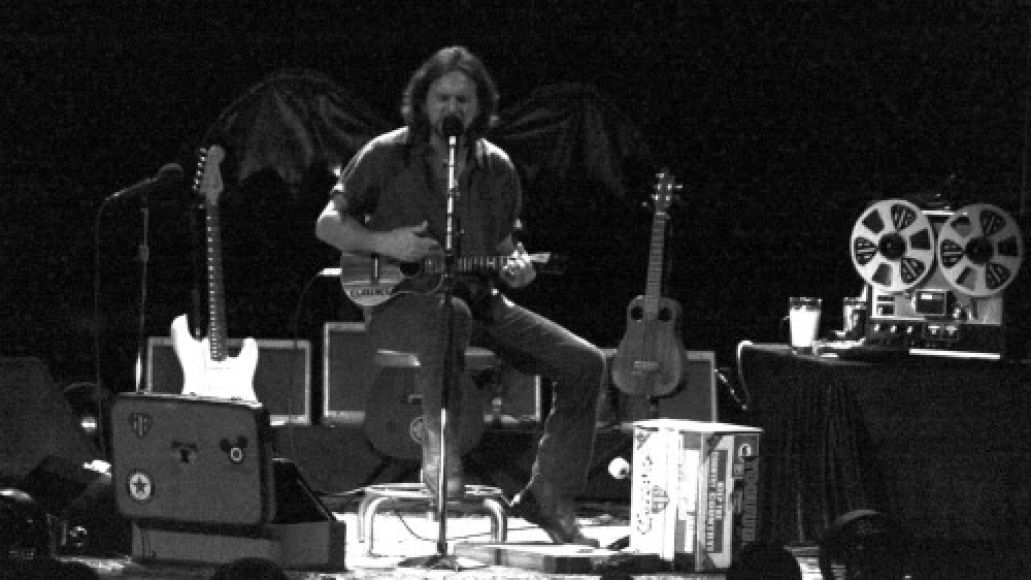 While he kicked out some 30 plus songs over the course of the night, the veteran Gen-X’er spent a great deal being a stripped down, Midwestern storyteller, too. He rolled out several Chicago-related anecdotes (who knew the Chicago Theatre once played B-horror films like Silent Night, Deadly Night?), told a hilarious tale about his time around Alpine Valley back in 1992 (it involved an army helmet, brunch, and Vedder’s genitals), and spit out a few self-deprecating jokes. Believe it or not, he was funny. “I think it’s about time we take our relationship to the next level, let’s see if we can reach a higher plane,” Vedder declared four to five songs in. “What are you wearing?”

Yes, he patrolled through plenty of material off of his latest effort, the so-so Ukulele Songs, but most of the set consisted of stripped down Pearl Jam favorites (“Porch”, anyone?), a medley of Into the Wild material (including charming cuts of “Long Nights” and “Society” with Glen Hansard), and an assortment of covers, ranging from The Beatles (a whistle-heavy “Blackbird”, a crowd-cajoling “You’ve Got to Hide Your Love Away”) to the (admittedly) predictable cover of “Falling Slowly” with Hansard. That last song worked well, though, and had the crowd on their feet. You can’t fault them, really. Not only were Hansard and Vedder belting out top-notch harmonies, they also had a string quartet supporting them – from Chicago, no less. 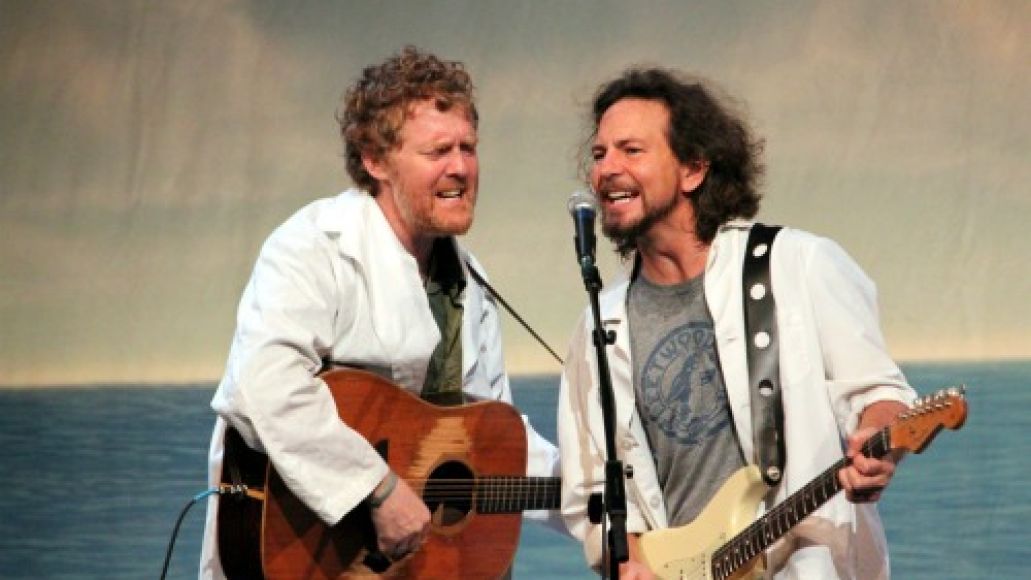 “This is the place to play this song,” Vedder posited, confusing a few in the crowd. He explained how there had been a request, for someone special in the crowd. That person was Mr. Ron Santo, Jr., son of the late Ron Santo, the legendary Chicago Cubs third basemen and longtime radio announcer, who passed away this past December. Before launching into the Cubs tune “All the Way”, Vedder expressed his admiration for Santo, stating, “It makes me want to kick out a stain glass window for the fact that he’s not in the Baseball Hall of Fame.” Shortly after, Vedder brought everyone to Wrigley Field – well, at least mentally.

“Even though I don’t live in Chicago anymore,” Vedder admitted. “Chicago lives in me.”